>> Back to Montagu main page

Park at Montagu Mountain Reserve office aka Die Ou Meul and walk into the crags by crossing a wooden bridge behind the mill. The Kloof can also be entered from the back at Avalon Springs. The wiki runs from Die Ou Meul to Avalon Springs.

Date Feb,2012: There is a R10 entry fee to walk into the kloof. A yearly permit can also be purchased from the Montagu Mountain Reserve office.

Possible that some lines may be swopped as non local climbers did this page. If mistakes are found, contact admin, request permission to edit and fix it please. 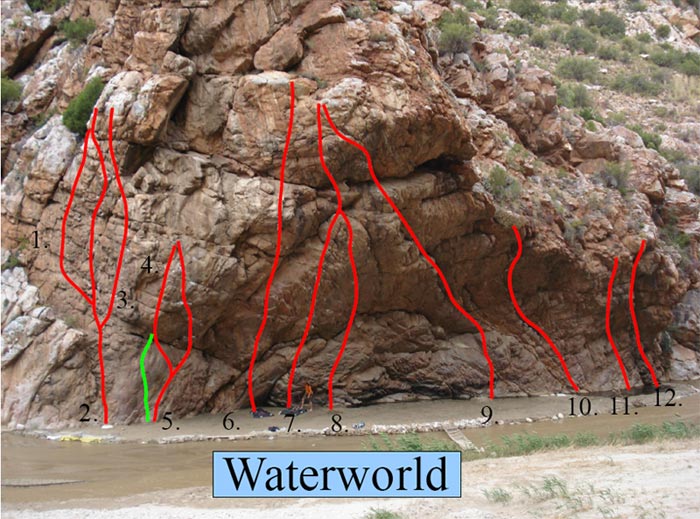 Bad Kloof From Left to Right. As you are walking towards Supertubes, Lion Said is the smallish, sort stack on the left side of the kloof before you cross over the stream. It is directly opposite Sloth. All day shade.

Overhanging Crag, 10 minute flat walk, Morning Shade & Late Afternoon Shade, Child friendly base Supertubes (aka The Supertubes) is one of the most popular crags in Montagu. The best routes are very overhanging and powerful. The base is flat and very sandy (so bring a rope mat). This is a very nice spectators crag and very child friendly.

Bad Kloof There are only 4 VERY HARD routes here. To get there you walk past Supertubes and then up to the right. It's quite a scramble to get to the crag (but then again if your climbing 8a this shouldn't be a problem now, should it?). Approach the ledge from right up gully, be careful. There are 2 abseil bolts to get down. You will need a 60m rope and please don’t forget to tie a knot in the end. Routes LEFT to Right.

Bad Kloof The crag is on the right hand side between Supertubes and The Palace. Routes LEFT to Right.

Bad Kloof On riverside about 50m from Uriah Heep.

>> Back to Montagu page