Directions: From Ceres, take the R303 north. Take a right just after Op-die-Berg and drive for another 20 minutes.

Large boulder fields at Houdenbek remain unexplored. There are some great boulders amongst many others that are too blank, too covered in holds, too small, or too large. It is therefore difficult to compare with well-documented bouldering destinations like Rocklands. 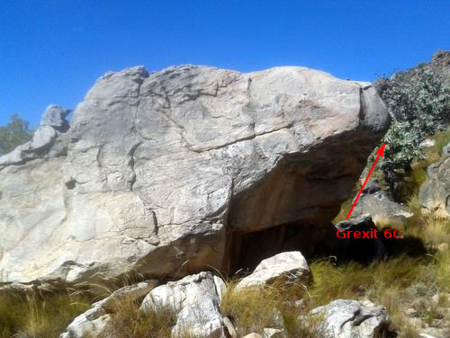 Grexit 6C. GPS: -32.95618, 19.41738. Sit start under the rounded overhanging arete/prow. Climb up on crimps/edges then lunge direclty up for sloping lip of the boulder. Match, then lunge again and top out. 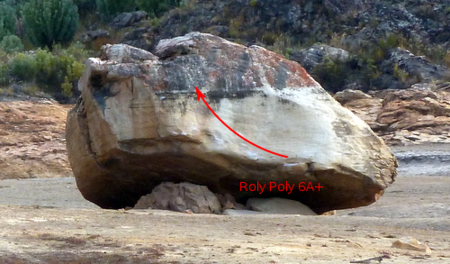 In general people should exercise caution when climbing on some of the lower wall sections which have sections of very hollow and loose/sandy rock. Anything could break and does! We broke off a number of pieces whilst climbing. It will get better with time but as its a new crag people need to be safe and perhaps climb with a helmet. After about the 3rd bolt on each route the rock gets much better and more solid.

At least one bolt has popped out: "The bolt in question was the first bolt of ‘Get Some’ (18) – I was leading and saw it was loose so gave it a tug and it just popped out."

If you open any trad routes, please contact Richard Halsey (email in the guide) and he will update the topo.