Over 100 natural climbs exist here, mostly multi-pitch natural lines. Routes of close to 100m high can be found at the junction of the kloof with Tonquani. The grades vary from 5 to 30 with the bulk of the routes in the 17-20 range.

A good stream flows down the whole kloof which is quite long, like all other kloofs it is mostly shaded by forests. Climbing is good all year round. Heavy rains can make the kloof dangerous. 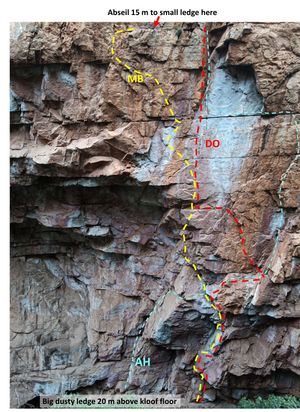 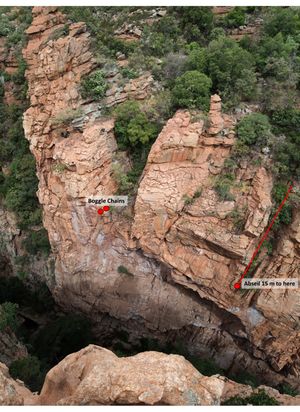 (Mind)boggle 27R **** [N] A peach-of-a-line, straightens up and improves the existing lines on this face in single beefy pitch. Steep fun climbing ends with headwall crux and a run-out-but-safe panicked dash to jugs. The climb is just about opposite Frog Gully and starts up Doggle. To get to the start of the pitch, either climb one of several pitches to gain the big dusty ledge or ab in – the latter is recommended (unless you like dusty scrambles). To ab in, get onto of the west side of lower end of Cedarberg kloof, opposite frog gully. It’s a good idea to view the pitch from the top of Frog Gulley to get your landmarks, then walk-around (via upper Cedarberg). Once at the top of the cliff, thrash through bushes down until you find a cleft where you can abseil off a stout bush/tree and some big ‘chicken-heads). It’s the cleft about 20-30 m upstream of the cleft above the Boggle abseil (chains). A 15 m length of rope (with knot in end) will get you down the cleft to a small foot-ledge (the finishing jugs). There is a poor (red BD camalot) here – use this and your ab rope to make a ‘lower-off’. Abseil off this (placing some gear to stay into the rockm and doom the wasps) on your 2 trad lines to get to the right end of the big brown dusty ledge (<30 m), the second then cleans and is hauled in to the ledge. Climb out: start as for Doggle, pull into the white corner (high nut), exit it, to easy layback slab rests, then move left to a huge loose looking white jug and more shaking to prepare. Move up the chunky arete to a flat hand-shelf, then forge on up the headwall on slopy jugs moving left to last gear in a finger sized horizontal break (helluva pumpy to place, small cam and nut) then some more hard moves on fingers to reach left to a big hidden undercling far out left, then way run-out grabbing of semi jugs and the finishing jugs (make sure they are ticked!) or flyyyy. FA: Andrew Pedley, May 2021. 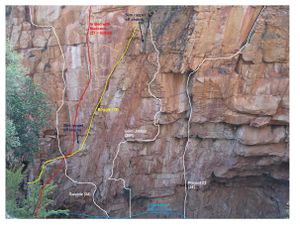 Gom Jabbar 28R ***** [N] “I must not fear. Fear is the mind-killer. Fear is the little-death that brings total obliteration. I will face my fear. I will permit it to pass over me and through me. And when it has gone past I will turn the inner eye to see its path. Where the fear has gone there will be nothing. Only I will remain.” Bene Gesserit Litany Against Fear, from the book Dune by Frank Herbert.

Like the Dune quote this route is dramatic. It weaves through the steep bowl between the top pitches of Boggle and Project 22 and finishes just right of Boggle’s chains. There is no fixed gear and, for the hard bits, the gear is bomber. There are great views of it from Frog Gulley or the Boggle abseil.

Find your way to the tree on the sloping Cederberg Traverse ledge. This is halfway up the crag, about midway between Project 22 and Suicide. There are a few ways to get here:

a) The easiest is to rap in from Boggle’s chains, placing gear. The second then removes the gear and gets hauled into the stance. This is a good option to excavate wasps.
b) Climb Cederberg Traverse. This is easy, but dirty and scrappy.
c) Climb the first pitch of Boggle and traverse right, beneath the big roof, passing the chains of the first pitch of In Bed With Madonna.


1. 28R, 25m Climb just left of the tree to a ledge with large loose flakes then traverse left to a ledge beneath a pillar (Suicide stances here, then traverses out left to Boggle’s ledge). Climb to a perch on top of the pillar, then continue diagonally right up the break to a rail. The climbing to here is bold, although relatively easy (21ish). Place bomber gear and rail right along the lip of the roof until able to pull through on jugs. Climb up to the next roof, step left then bust through, initially on big side pulls, to gain a short, left-facing dihedral. Climb the blunt arête to the next overlap, then move left and up to the obvious finishing break. Fight the pump up then right to the arête to a shake. Suck up the exposure and do the last few moves diagonally left to the top.


FA: Hector Pringle 2019/03/21, with Christopher O’Donovan, although this line is Andrew Porter’s vision. He first tried it ground-up in 2001, and spent many years working it before ultra distance runs in the Drakensberg and Himalaya eclipsed climbing.

1. 19, 30m Climb the face on the front of the pillar to below the big roof. Rail left to the arête and pull around the overhang to get into the base of the shallow open book. Step right to a foot ledge and climb the thin crack until able to step back left into the shallow open book. Climb to the rail and rail right to the arête (shared with Sidewalk). Step right onto the front of the pillar and climb jugs to the top.

Life after Enlightenment 27 *** [N] Just right of "Strange days", this is an extention to Shaun Harris' boulder problem "Green Beetle" (7A+), found just left of the right-facing, black-streaked dihedral at the old MCSA meet spot. The line is very intimidating, as the gear placements are few and far between, with a possible deck fall if you miss the rail after the redpoint crux.

1. 27, 15m Climb "Green Beetle", and then continue straight up. The route is naturally divided into three sections, followed by a top-out scramble. The middle section is the redpoint crux, with a very reachy move to a good rail (between the all three sections are good rails - the only places on the route to get in gear). Luckily the gear between section one and two is bomber, but the problem here is that your are well above your gear (small cam and a nut) when you go for the second rail, and the first gear rail is only 3.5m above deck. The second half of the route is super easy and also well protected. sling the tree before the run-out scramble and finish the route.

Notes: 1. Take extreme care if you place on lead, as decking is a serious possibility with a bad belay. 2. The route was top-roped before being led. 3. Gear was placed on lead, except one piece, to protect the second section, to prevent the possible deck mentioned. FA: Heinrich Kahl, 28 March 2009.

1. 25, 15m Just right of "Life after Enlightenment" there is a right-facing, black-streaked dihedral, with a roof. The route goes straight up the dihedral and through the roof, onto a ledge. From this ledge, climb "Scotman's Safari" (9) to top out.

Melophobiacs 16 *** [N] When walking down the kloof, there is a cave on the true left, downstream of the wormhole, opposite a good swimming pool. The route described takes the obvious corner and face above at the right hand edge of the cave. This is 3m right of THE CRACK. A fun warmup or cool down!

1. 16, 25m Climb the short recess on the right of the cave until able to step across left into the shallow dihedral with finger crack. Climb the dihedral and finger crack to below an overlap. Some fun reachy moves take you through the overlap to a small ledge. Climb the short face on your left to the upper ledge with a comfy tree belay.