You are here: Home › Llandudno Bouldering Guide
Posted by Justin Lawson on Nov 7, 2011
17 Picture: Joe Möhle getting some big air on Zero Gravity 7B+. Photo by Jimbo Smith

Llandudno is best known for it short desperate slab climbing above dodgy bolts from the 80’s. But more recently it is being frequented by a new generation of climbers looking for new urban bouldering areas. If nothing else it’s a sweet spot to chill with your buddies after a good training session and watch the sun go down over the sea.

Llandudno Bouldering is 8 km from the centre of Cape Town and approached by one of the most scenic drives, over Suikerbossie Hill from Hout Bay or in the other direction from Camps Bay, along Victoria Road, Llandudno lies nestled in a private and peaceful cove with one of the most secluded and beautiful beaches in the city.

Joe Möhle writes:
For the past eight years I have been very active at Llandudno and know most of the bouldering achievements that have occurred in that time. Prior to this Llandudno predominantly saw sport climbing development.

All the routes on the American Dream Wall have now been bouldered. Recently, some climbers have seen fit to take Llandudno Bouldering twenty years back by bolting some highballs on the Guardian Angel boulder (including the Guardian Angel Project).

Whilst I respect their decision to do so, I disagree with this method wholeheartedly.

Highballing is an important part of bouldering and in other parts of the world (e.g. Bishop, CA) climbers are pushing the limits of the sport by climbing boulders that would dwarf the Guardian Angel boulder. If hitting the deck frightens you, then bring more pads or stay in the gym, but please don’t stagnate the progression of our sport and scar these beautiful boulders with bolts.

It is important to think out of the box at Llandudno and not get caught up in the “no more problems, all too easy or too hard” mindset. There are undoubtedly many more classics waiting for those with the imagination to express themselves through the climbing here. The area is divided into two sectors, split by an obvious clearing in the centre of the headland. The biggest boulder is “the egg” and serves as a good point of orientation (still unclimbed). Llandudno boasts over one hundred documented problems and counting.

Only the headland situated on the right hand side of the beach (facing the ocean) is documented here (there is also good bouldering on the left hand side of the beach).  I have tried my best to credit the actual first ascentionists as accurately as possible.  This has not always been an easy task since Llandudno has traditionally only been visited intermittently by climbers who don’t keep track of what they send.

May this guide share the joy that I have found among the friendly giants of Llandudno. 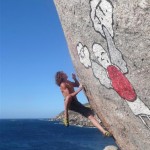 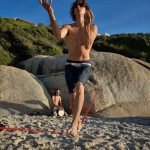 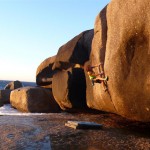 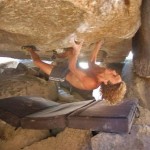 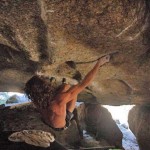 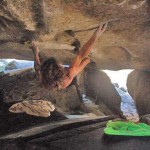 Matt on the Love Project 8B at Llandudno 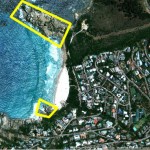 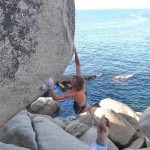 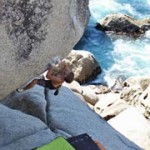 Joe Möhle getting some big air on Zero Gravity 7B+. Photo by Jimbo Smith