Joe Möhle recently sent ‘A Clockwork Orange‘ on Table Mountain.   The route is 23/6c in the guidebook, however Joe was unable to send the route when he tried it last year!  Joe proposes a grade of 25/7a+.

Joe lead the route placing gear and skipping the bolt (with homemade hanger) and peg – this by the way was the 2nd ascent of the route, Dark Horse seconded the route. 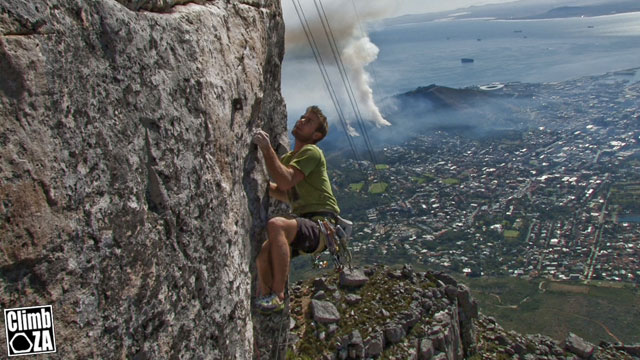 Joe on the 2nd ascent of 'A Clockwork Orange' (25/7a+) - the smoke in background is from a controlled burn on Signal Hill. Photo by Garrreth Bird

‘A Clockwork Orange’ and its somewhat dubious history.
By Joe Möhle

The route was opened in 1990 by 3 guys, namely: Dave McCrindle, Gordon Morton and V. Vajner. 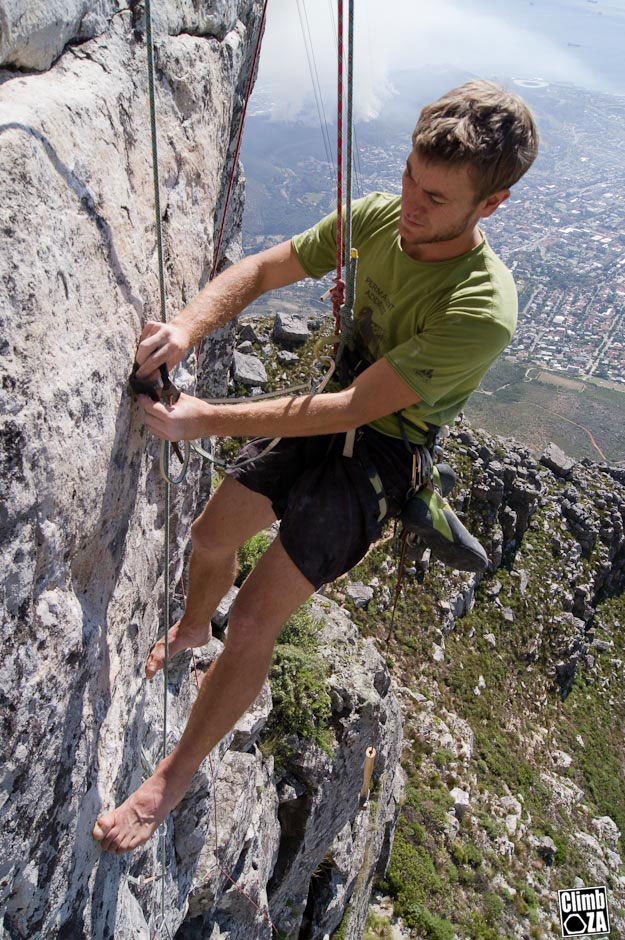 Two bolts were placed on the route (this was the second round of bolting to occur on TM after ‘Boltergeist’).  The lower bolt was chopped, plus one of the pegs higher up.

No one is quite sure of the style of their ascent and bolting – (nobody seems to know much about the route except that it is a sandbag and has a bolt).  Anyway, as far as I know, I have made the second ascent (after speaking to Tinie, Snort, etc).

I decided to do it without the bolt and peg and remove both afterwards.  The route is run out and committing but a fall from the crux would be safe.  I felt that the fixed pro should only be removed once somebody had done the route without them, without a headpoint approach.

I rapped down the route to clean crucial holds of lichen and rails of moss a few days ago. and lead it yesterday (19th of April).

What type of bolt was installed, how easy was the bolt to remove and how did you remove it?

Joe:  The bolt was an 8mm coach screw with a sleeve (the nut is part of the bolt).  Removing the bolt was easily done using a spanner, the bolt had rusted through on the inside, the piece that came out was only about 10-12 mm long.
There was also another bolt further down that had been chopped sometime ago.

Did the bolt break when you removed it?
Joe:  No, it was rusted through already, seemingly just the rust was holding in place.

What is your last gear before going into the crux?
Joe:  There are 3 small wires on the right hand side RHS, on the left another small wire and two Wild Country Z5 cams.  About 6-7 pieces in total.

How far would you fall if you came off the crux?
Joe:  About 6-8 meters.

Do you have any other routes in mind that need ‘freeing’?
Joe:  Hopefully my project ‘Darkest Africa’ will go this afternoon!  And then Double Jeopardy (30/8a)
**Please note:  Bolting is forbidden on Table Mountain.

Below is a teaser video for a documentary on TM: 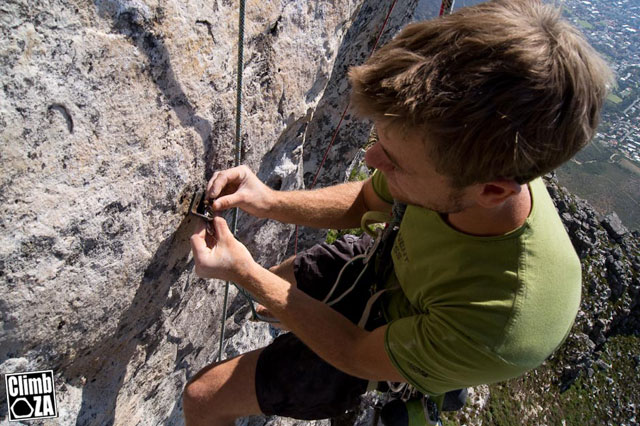 Ocearch and the Kogel Baai attack – Searching for answers, finding few
Video: Bouldering at The Classroom

4 Responses to Clockwork Orange 23 going on 25