It’s not often that I get to fly through the air with both hands aimed at a finish jug.  It’s even less often that I get to catch that finish just and celebrate veraciously.  I got to do both in Waterval Boven.  Lab Rat has been a nemesis of mine since November.  This was one of the first routes I ever saw when I arrived in Waterval Boven for the first time in 2006.  My eyes grew large and my secret desire to climb it slow grew larger.  At this point I was climbing 6a so the thought of 8b+ was not even a fantasy, I had only ever climbed on rock once before and didn’t manage to do that very well either.  I was a complete NOOB but I was motivated and I knew from past experience, I can do anything I set my mind to.

For years I’ve been training and getting stronger, sometimes in leaps and bounds, sometimes a micro at a time.  Last year was a micro year as was this one. 8b is hard work, 8b+ is another game altogether. I hadn’t been on Lab Rat in ages, since about two weeks after I had my accident this year.  When I got on it a month ago and did all the moves that I’d been struggling with I realized that a switch in my head and body had been flipped and I was really ready for it.  It was odd too seeing as I’d been climbing such long routes recently like Mutation, Rodan, Vorpal Sword and Jack of All Trades.  I hadn’t been on a short bouldery climb in ages.  But when I jumped on Lab Rat I somehow knew that my weekend’s plan to get back on Rodan wasn’t going to happen. I got very close to doing it about a month ago but failed when I slit the tip of my ring finger and had to call it for the weekend.  The next month I bouldered three times a week in the gym and started training exceptionally hard trying out the Sean McColl training program that he posted. I started feeling stronger than before.  My time on the Violent Streak (8b) at the Chosspile also contributed greatly to my power endurance.  That is one tough line.  So is the Shadowfax project (8b+) which I’ve also been fighting with for ages.  My links on both of these climbs are progressing really well and sends are going to become immanent in the near future.  Both Shadowfax and Violent Streak have beaten the crap out of my poor pinky on my right hand.

Left: My finger last week and on the right Sunday morning before the send

I arrived in Boven this Saturday and needed to get my draws off of Rodan.  Without warming up, I cruised through all the moves trying not to get too pumped or tired.  I felt unbelievably strong.  Did some of my best links cold.  I cleaned the route and put my draws up on Lab Rat.  First go of the weekend I fell off the finish jug of the dyno — Happy Birthday Brian.  I lowered off, rested a while and tried again all afternoon but couldn’t send.  Final go of the day I linked from just before the crux fingerlock to the chains.  This was the first time I’d been able to link this section. I was psyched.

Sunday morning we were on quite a strict time schedule as I needed to be back in Boven before 1pm First go of the day I got past my previous highpoint, sticking the finger lock lower down and then I dorked it three moves before the dyno!  I couldn’t believe it.  I got down, waited five minutes and blasted through the lower crux effortlessly.  While shaking out I made myself focus that little bit more than previously.  I did the boulder problem to set up for the dyno, took a deep breath and while in that moment I realized that my arms felt as though I hadn’t been climbing at all.  I was completely fresh. I was ready.  I pounced.  Both hands latched the jug, my shoulders didn’t even move as my feet shot out backwards.  I had it.  I wouldn’t let go.

I celebrated as I campused to the chains… I was so happy! 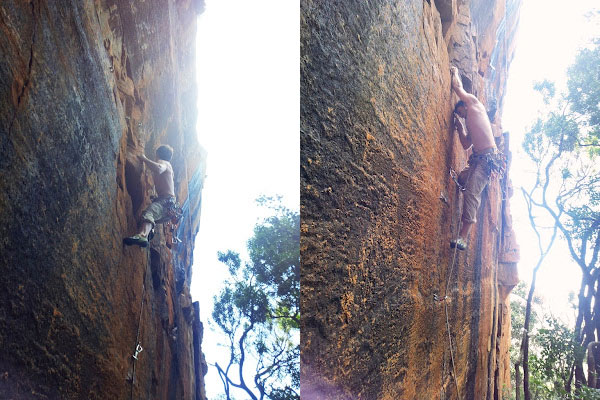 Left: Moving past the fingerlock and into the rest. Right: Moving into the boulder problem for the dyno.

Brian is sponsored by Edelrid, Mad Rock and Omega Pacific.

7 Responses to Lab Rat… My second 8b+