You are here: Home › Winners of the African Alpine Adventures Photo Competition
Posted by Justin Lawson on Nov 7, 2012
3

We shortlisted 20 out of just over 80 entries.
The independent judges: Garreth Bird, Georgia Court, and Robert House, then selected the final three.
A “most popular picture on Facebook” bonus prize was awarded too.

So, without further ado …….

“We had spent the day climbing Green Gullies which lead us to near the summit of Mosterhoek Twins in the Zuurberg. By the time we got out of the gully it was already late in the afternoon. There was a lot of snow on the mountains. So much that it almost felt like being in a alpine environment patagonia.  Fourtunately the snow was hard enough not to sink in. From here the route continues down a gully to the ridge in the middle ground on the right of the photo.” 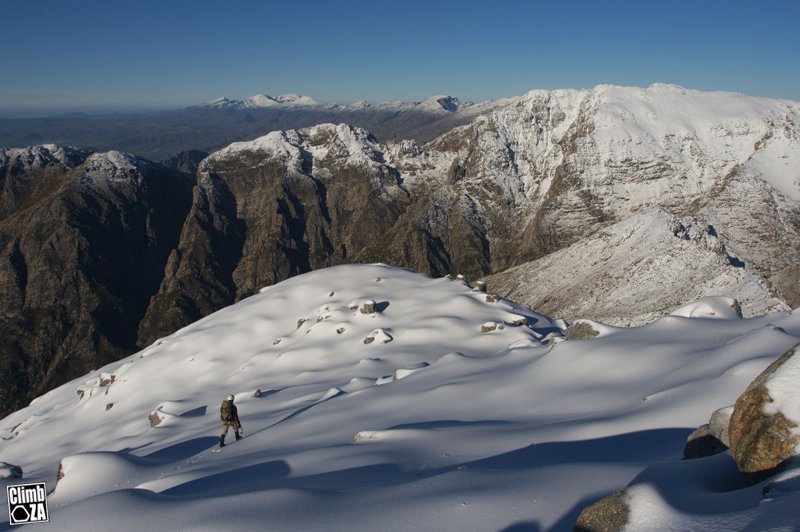 3rd place winner – Is this really the Hex? by MoritzThilo

What the judges said:
GB: While perhaps not perfectly framed, this shot was all about scale and lighting. It also touched on that emotion one feels when surrounded by the grandeur of the mountains, totally removed from the troubles of everyday life.
GC: “O solitude! If I must with the dwell, be it not among the jumble heaps of murky buildings but climb with me the steep – Nature’s Observatory”  (Keats 1884). This makes my spirit soar to the skies & I can taste the sweetness of the fresh air. Need I say more.
RH: Certainly this image of a remote hiker is striking and well thought through. The isolation of the hiker is countered by the spectacular scenery and well balanced lighting. The composition is wellthought through and allows the hiker the space to ‘walk into’ the shot. Calm, tranquil and striking.

“This photo was taken on the final pitch of Makhaza in a whiteout. I cursed the conditions at the time, because Gavin appeared indistinct, but soon realized the misty conditions created an alpine feel, which is not expected of a ‘Southern-African’ environment. It should be noted that taking photographs in sub zero temperatures is a trying exercise… but makes the effort worthwhile!” 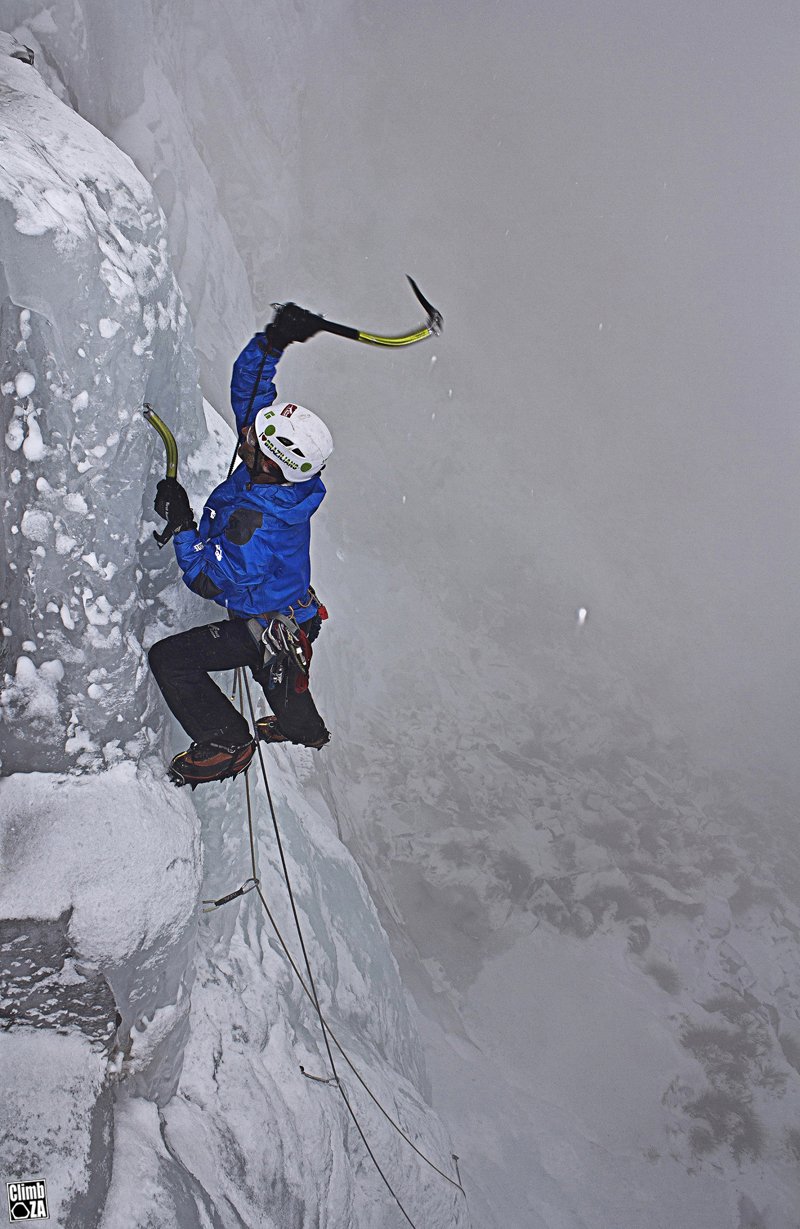 What the judges said:
GB:  This one was a more classic shot, big on the ‘wow’ factor for local viewers. The action in the frame brings dynamism. The misty atmosphere, and the location makes one ask “do we really have such sweet ice walls in South Africa?!”
GC:  Although slightly leaning towards over processing, this shot can not stop you thinking: I wish someone took a photo of the photographer! The intensity of the sport and the sport of photography can not be waylaid in this shot and it makes me want to shout: Yeahaaa! go get it!
RH:  Scored high on the ‘Wow’ factor. A powerful, striking image and an action shot in one, taken in far from ideal conditions, as the light was flat, would have not given the photographer much to work with. Some post editing looks to have been worked in to the shot. Soft light adds to the feeling of height and drama.

“What started off in the spirit of a picnic, ended in a mighty struggle for survival!
After enjoying near perfect weather on our way up, late afternoon winds surprised us after just 1 pitch of ice climbing at Makaza. We got completely pummeled by storm force winds for 12 hours through the night, but 1 broken tent and much suffering later, we managed to force our way back over the top of Giants Castle, often lying prone and clinging to grass tufts in order to avoid being blown away, to eventually find shelter in the lee of the escarpment.” 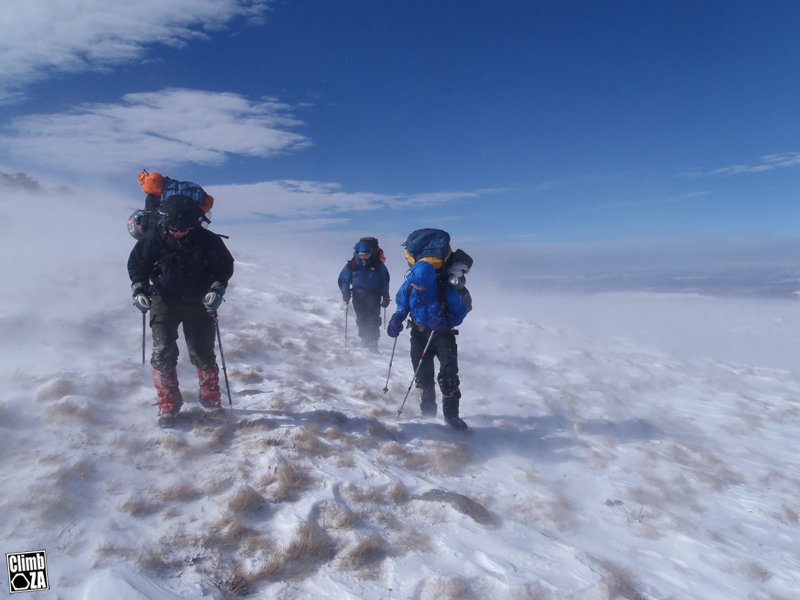 A Windy Walk at Giant’s Castle by Craig De Villiers

What the judges said:
GB: Although not very technically proficient, this shot came out on top mostly through its ability to transfer an emotion onto the viewer. One can almost feel the intensity of the environment, right in the teeth of the wildest part of winter, and the difficulty in attaining images under these conditions added to its cache.

GC:  As a documentary film maker this shot stood out for me because it does what we are always trying to do – it grabs the moment that lets the viewer feel the emotions and experience of being in that situation, in that place and at that time. It transports you from your office chair into the cold wind driven snowy mountain tops. Brrrrrr!
RH:  Immediate attention-grabber as an emotive and somewhat haunting shot.  Swirling wind, and snow adding to the overall emotion and adding to the feeling of being there, in the moment. Little splashes ofcolour help define the image and add intrigue. Whereas its not technically precise, it would have been difficult to frame and indeed ‘see’ the shot in those conditions.

“This particular shot was taken this weekend the 13th of August at Waaihoek, we extended the already long weekend to hit the perfect weather today (on Monday), we walked up in some of the worst blizzard conditions I have ever experienced so that we could enjoy the perfection that today brought. This particular photo is of Tom Utermark, a friend of mine who is a big balls kinda guy and a great skier, he saw this perfect cornice on the Southern slope up to Waaihoek peak and he jumped off it, it took to jumps to frame the picture perfectly but I think we got it!“. 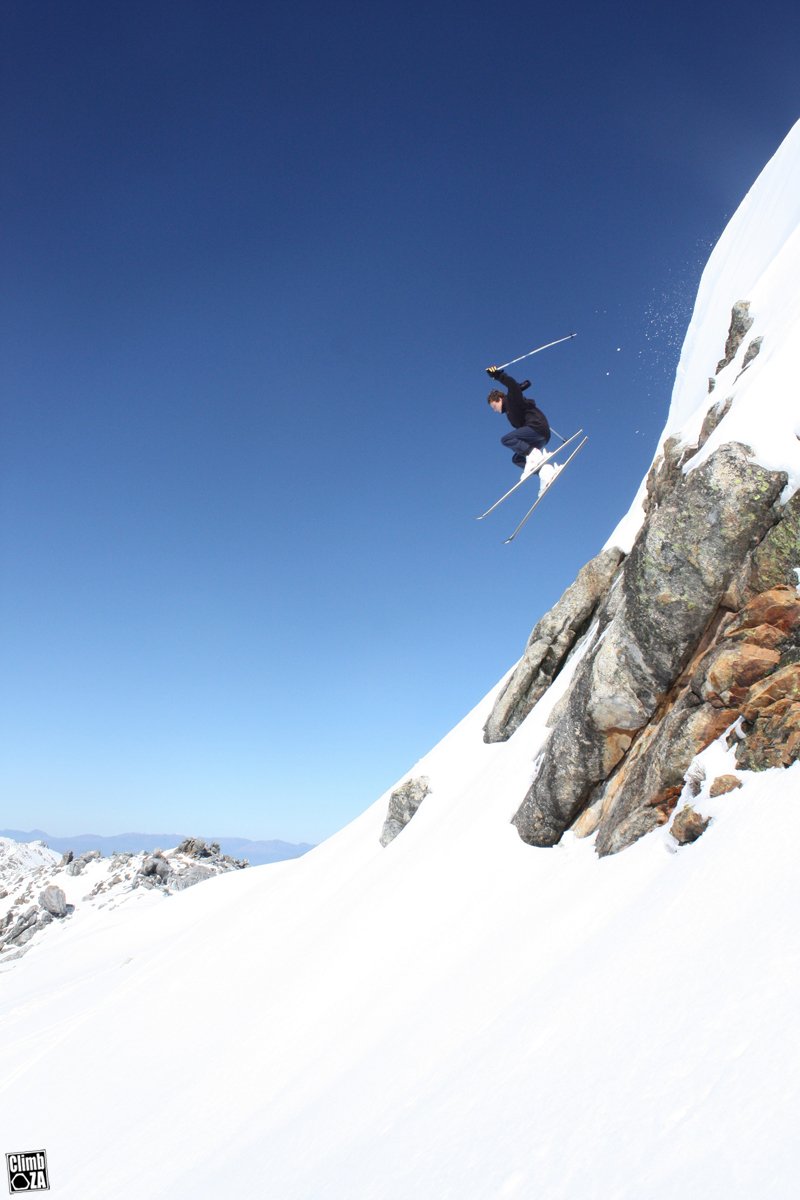 What the judges said:
73 people liked it on Facebook.

All entries can be seen here.  The shortlisted photos will have “Shortlist” commented below them.

We feel the competition was a great success, and would like to shout out big thanks to everyone who got out into the hills this winter and sent us their pictures.  Also to thank are, DMM, La Sportiva, and Wild Country, without whom we would not have such cool prizes to award!

3 Responses to Winners of the African Alpine Adventures Photo Competition