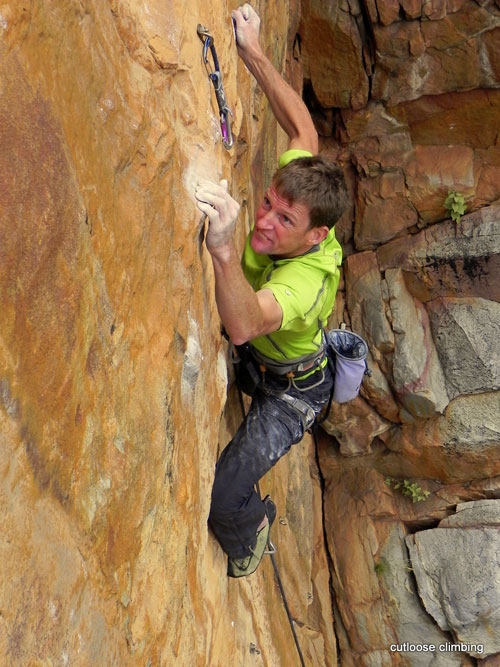 Montagu recently received it’s hardest face climb courtesy of Clinton Martinengo.  “Brutality“ 33 at Snark Buttress in Oorlogs Kloof lay as a project for nearly a decade before Clinton summoned enough motivation and strength to finish it off. Steve Bradshaw (Snr) had the following to add:

“Between Christmas and New Year 2002, Guy and Robyn Holwill, Clinton Martinengo, Mark Johnston and Steve Bradshaw (Snr) rebolted the lines on Snark Buttress, Oorlogskloof, creating, with the first ascenionists blessings, what have become probably the most popular routes in the kloof. They also made some new link-ups and bolted two projects that remained unclimbed until recently. In 2010 Steve completed the first of these – the very thin slab right of Peace Frog. “As I Am” is shorter than my Thermarest, but features some tricky moves and small holds and goes at 31. It took until 27th December 2012 for Clinton to take down the remaining project.

With resident guardian of Oorlogskloof (Steve) sidelined with injury and recently struck down by a golf ball to the head while out walking in his suburb, Clinton has set about upgrading Oorlogs with a vengeance. He rebolted all the routes on the Canasta Buttress (which are now safe), bolted a new project high up above Snark Buttress and started re-working the remaining project on the Snark Buttress. The line follows tiny laybacks, crimps and slopers left of The Pig Must Die, and is characterized by very insecure climbing, terrible footholds and very tenuous clips.

Clinton finally got the redpoint of “Brutality” on about his 8th attempt of the day on 27th December, just managing to complete the project in a decade. If you are looking for a quick tick at 8b+/33, this might not be the route to hop onto. It bakes in the sun all day, leaving only a small window of opportunity in the evening, has handholds that would feel terrible as footholds and a couple of really heart-stopping clips.”

*Doctors report that Steve (87) is currently being kept alive on a coffee machine, but given his quality of life are seeking the consent of his climbing partners to switch off the machine.