First up is that Hector Pringle , Gosia Lipinska and Julia Wakeling summited Fitzroy on Saturday night and are down safe and partying tonight.  No mean feat let me tell.  This place is breaking people every day as it extremely hot and the whole place is falling apart with rock and ice fall all the time.  The weather has been spectacular with no wind!  And is set to continue almost as good the whole time we are here. 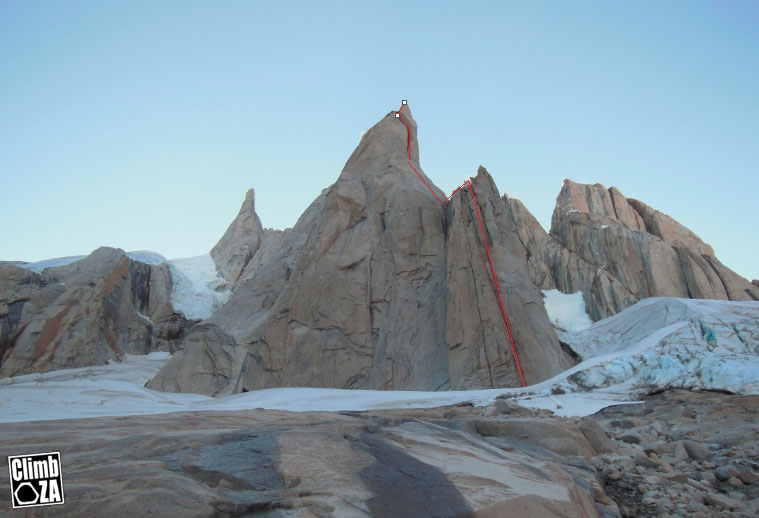 Marijus and I have had a baptism of fire starting with a long 10 hr walk in to climb the Rubio Y Azul on the Medialuna.  The walk in is very pleasant for 3 hours and then gets complicated and involves one very loose scree
Followed by hours over the glacier to base camp.  Next morning we set off after 6 Argentinians who seemed to know the way up the rubble.  They somehow managed to get out of site over a snow ridge just before the start leaving one of their 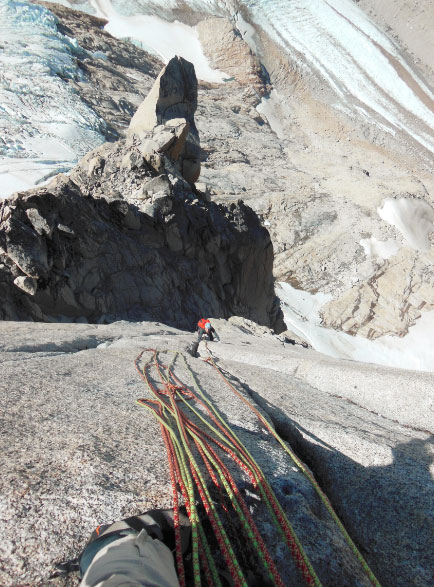 party stranded without crampons who delayed us as we had to rescue her from sliding down and probably getting injured on the granite slabs below.

The Argentinians split into two parties and we climbed in between.

I did the first off width only grade 5 (19) but that is if you have 2 or 3 size 4 Camelots – I had one.  It was scary and run out for 10m and ideally one should lay back the pitch but with only one cam it was safer but very strenuous climbing it in true off-width style with one knee in.

On the second pitch the Argentinians above us dislodged a huge block with lots of lesser bits that unbelievably did not kill anyone as it fell straight down the route and hit a boulder just left of where a girl was belaying.  It ricocheted and sliced her head open and laid her out.  She was laid out flat and has no memory of the incident so quite concussed.  The Dr Dilemma set in as to whether we should go down but we got  thumbs up from below and they headed down after an hour or so.

The first party was very slow and we ended up waiting around for hours.  At the second last pitch, 6c they took a very long time and  we decided to bail as it was 6 pm and we would have 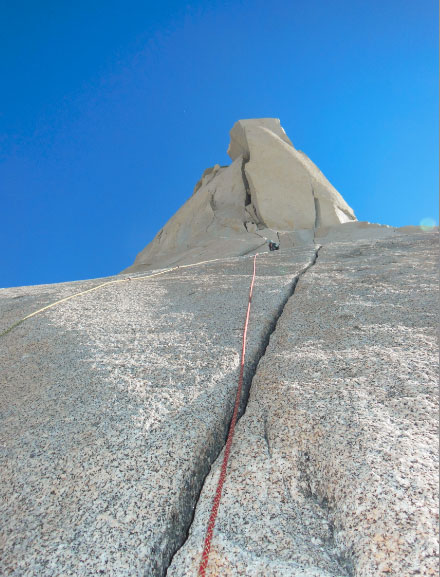 had to rappel behind them and needed 4 hrs to return to base camp.  As it turned out it was a wise move as one of their party could not get up the pitch and they also bailed.  We got down safely with only one nick in our one rope.  We found base camp just before dark.  And the Argentinians only arrived around 2am.  So good move on our part.  Back at base I checked out the girl and she had a headache and seemed OK.  She slept sitting up though as this better for her headache.

The long walk out and met up with an American Jonathan Schrock.  Very experienced lad with good legs so we teaming up with him here-on.  Need 3 people to carry load up that is needed……

We partied till late last night with our friends the Brits.  Dave, Dan And Stu

Making a lot of good friends here.  It really is great and the camaraderie is amazing……
Only problem is the heat which makes the huge walk-ins really hard work.  Everybody is sun burnt except me cause I wear my “dorky” white shirt.  And the sun is dislodging normally iced in blocks as happened on the route we climbed….  Kinda dangerous so we gonna pick our next route with great care…..

We are finally back from the good weather window – we spent 10 days in the mountains.  I’ll write a proper account soon, but Hector Pringle, Julia Wakeling and I summited Fitz Roy or Chalten as it was originally called on Friday via a route called Afanassief or the Northwest Ridge.  The route is the longest route on the mountain ascending 1550 vertical metres.  We spend 26 hours on the move the first day, summited after 8 hours of climbing on the second day.  We slept on the summit and descended the standard Franco-Argentine route in 19 hours.  The experience was big and our our bodies, hearts and minds are full to the brim.
We’re safely back, making up for lost calories and sleep.

Gosia and Julia are sponsored by:  Black Diamond, Beal, Saltic and First Ascent 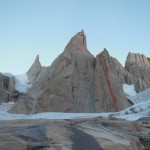 The Cerro Torre Route is just behind this peak and Fitzroy is behind me. We are in the valley between the two. Photo by Charles Edelstein 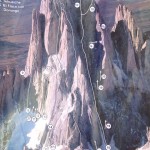 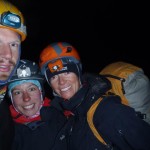 Starting at 1am – about to cross the glacier — Left to Right – Hector, Gosia and Julia 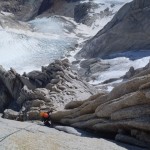 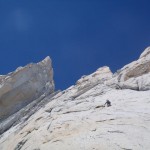 The central slaps – 8 or so pitches of awesomeness 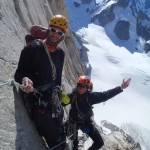 Hector and Julia in high spirits. 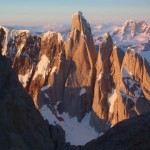 Cerro Torre from our first bivy. Photo by Gosia 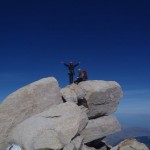 Hector and Julia on the summit (picture by you know who 🙂 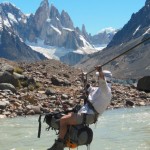 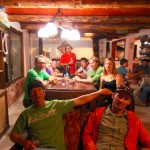 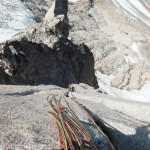 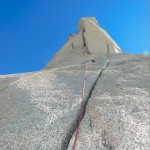 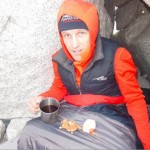