Black Diamond has just released its new range of small cams.  They are officially known as the X4 Camalots. Rumor has it that internally, they were known as Predators, a tongue-in-cheek code word to take on Aliens, the one-time market leader for small cams.  While we were in Yosemite Valley in California, Trish and I decided to buy a set of these new X4s and try them out.

A bit of background to small cams.

The market for small cams is rather crowded, with many good products out there. That’s a far cry from a few years ago when small cams were rather scarce. 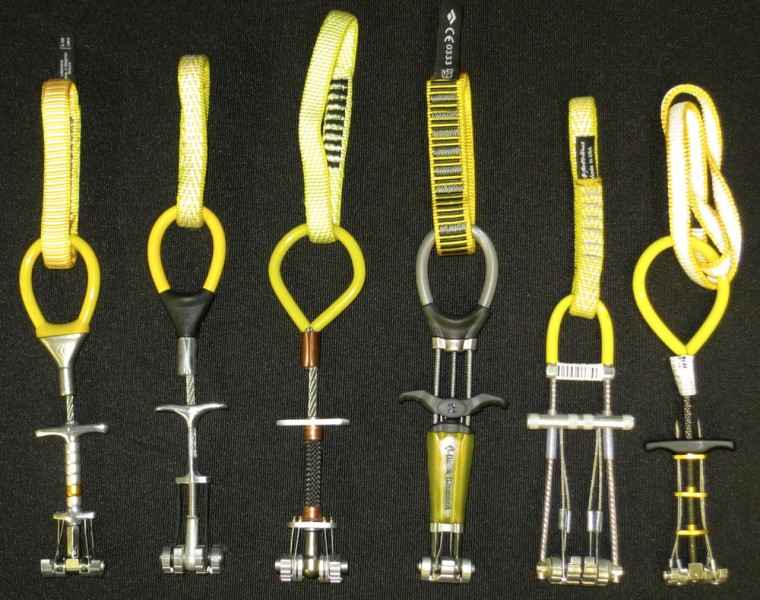 Let’s take a look at the cams currently available in SA:

Aliens had been the defacto standard for small cams for a long time. Many people swear by them, with an almost cult-like following. The company or the product has had lots of issues though.  There was an infamous recall some years’ ago, after some shoddy workmanship was discovered. Then the owner Dave Waggener died, and so did the product, at least for a while. Then in September 2011 TechRock purchased the Alien name, design, patent and manufacturing tools. TechRock is a Spanish company that own a few brands, such as Roca, Faders and Fixe, and so the CCH Aliens were reborn as Fixe Aliens.  We sell them at R835.

There is Black Diamond’s own C3 Camalot, now a few years old. This is a 3-lobe cam design, hence the name C3, designed to fit narrower pockets. The head width is significantly smaller than other 4-lobe cams. I personally never liked them due to their unusual trigger mechanism, a flat and rigid plastic enclosure that is not very inflexible, especially in vertical cracks. According to Black Diamond the X4 will not replace the C3. The C3s sell for R785.

Metolius cams have never been a big deal in South Africa. In the USA the company’s cams were at one time outselling BD, but over the years the company’s TCUs, PowerCams and SuperCams were all eclipsed by products from BD and other companies.

Then, a few years ago, Metolius came out with the new MasterCam design. The MasterCam was similar to the Alien design, with some improvements.  Its one drawback is that the trigger sleeve is a bit inflexible. The cam works great in vertical cracks (like Yosemite), but not so well in horizontal cracks (like we have in Cape Town). Nonetheless MasterCams were a major step forward and the well-respected Chris McNamara gave it the SuperTopo Editors choice as the best small cam on the market. The MasterCam is priced very well at R585, this makes it the small cam market leader in SA at this point in time.

Many people never liked the larger Aliens or Master Cams. For both of those cams, the trigger wire action is too stiff. Also, the narrow cam head width, a major advantage for small placements – becomes almost a liability with larger sizes. The units don’t sit very nicely any more – they tend to get quite square and almost feel like they could topple over. As a result, in the past I have only used the smaller size Aliens or Master Cams, opting for the BD C4s or DMM Dragon cams for larger sizes.  Fixe agreed with me – when they started making Aliens again, they only started making them up to the red size (which is a .4 C4 equivalent). 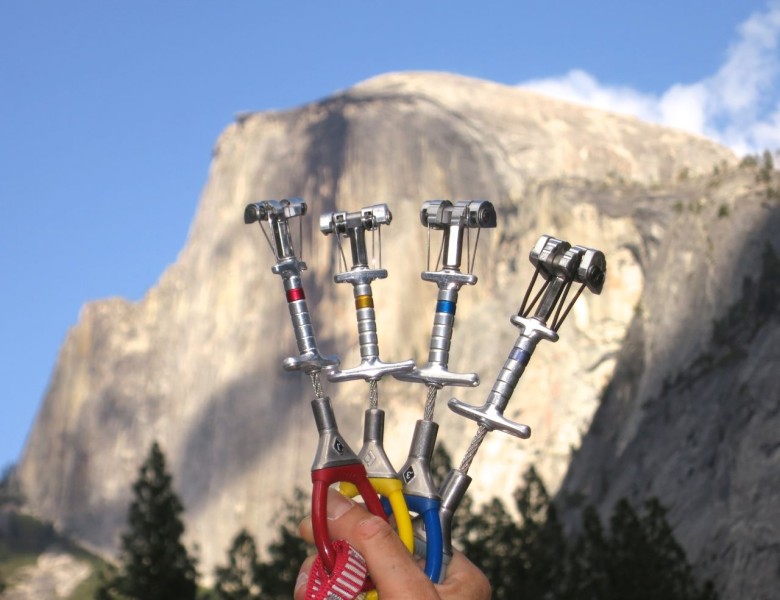 The first impression is that they are really well made, like all BD products. The cams have a very solid feel to them. The trigger mechanism is smooth, not too light and not heavy.  That goes for the entire range, from smallest to biggest.  The steel is polished, the units are really shiny, beautiful-looking in fact. I would call them cool-looking.  Call me a gear junkie.

Upon closer examination, I found that the smaller three X4 sizes (.1; .2 and the .3) are single axle designs like Aliens and Master Cams. The three larger ones (.4, .5 and .75) however utilize a double-axle design, identical to the existing BD C4 cams. So when looking at the X4 you actually need to compare them to Aliens and MasterCams for the smaller sizes, and to BDs own C4s or the DMM Dragon Cam for the larger sizes.

The BD engineers seem to have taken a careful look at both the Alien and Master Cam design and chosen the best of both worlds. Some of the X4 trigger designs use Kevlar wires that attach to the individual cam lobes, a design feature shared with the Master Cams. BD fixed the somewhat lacking Master Cam trigger sleeve design by taking the Alien black sheath concept and covering it with a series of steel beads. BD calls it an armored trigger wire.  This design is clearly more flexible than the Master Cam and will be more robust against wear and tear, especially over sharp edges, than either the Alien or Master Cam design. It works great. Well done BD. 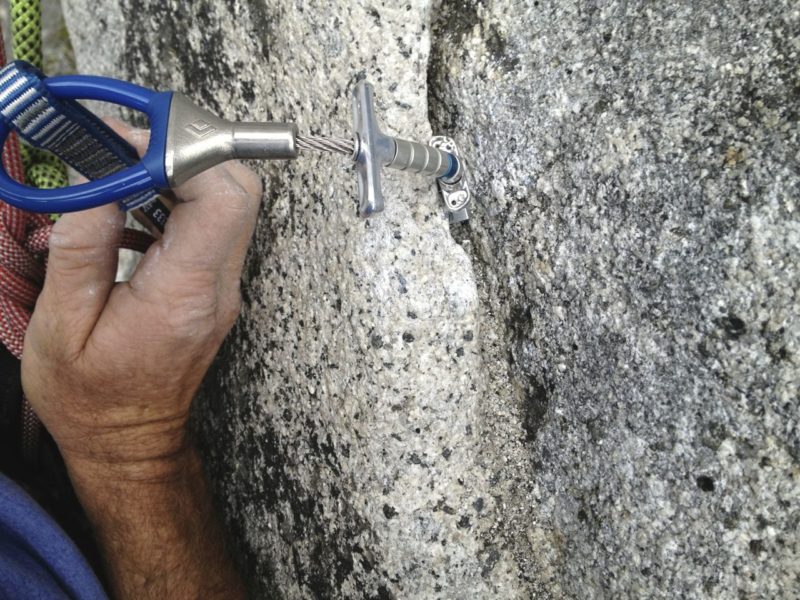 The “armored” X4 trigger sleeve. The flexible plastic sleeve is the same as on Aliens, but is protected by some aluminium beads.

BD makes a big deal (haha excuse the pun) of the fact that the (smaller) X4s have internal cam springs. What that means at least on paper is that the cam lobes have been machined so that there is a slot in the middle of each cam lobe to accommodate the springs. That theoretically allows the cam head to be narrower. With the larger C4/X4 comparison that’s certainly the case, the X4 is 20% narrower than the C4. But with smaller Master Cams or Aliens, I found that the X4 design isn’t noticeably narrower.  In some sizes Aliens are actually narrower. 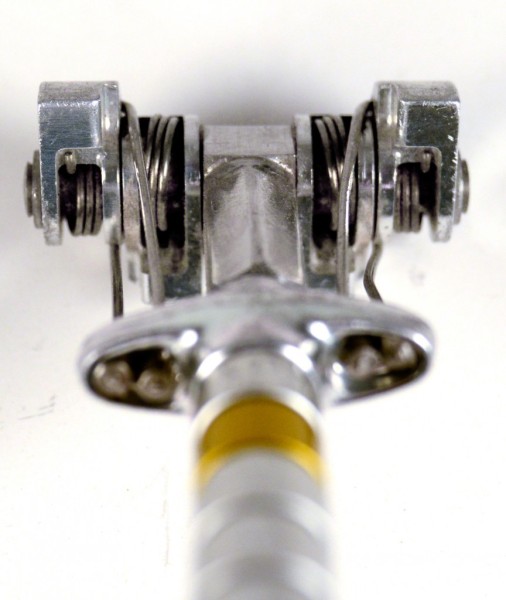 The other “selling point” of the smaller X4s is the range. Double axle cams have always had a bigger range. But small cams can’t accommodate two axles next to each other as the cam lobes are still too small, so BD came up with a new idea – a different oval axle design where the cam lobes move further out on the axle itself.  BD calls this concept the stacked axle design. Sounds all technical and complicated. In reality the BD marketing department seems to have gotten a bit ahead of themselves – on paper and in real life the head width and expansion range is very similar for the X4, MasterCam and the Alien. 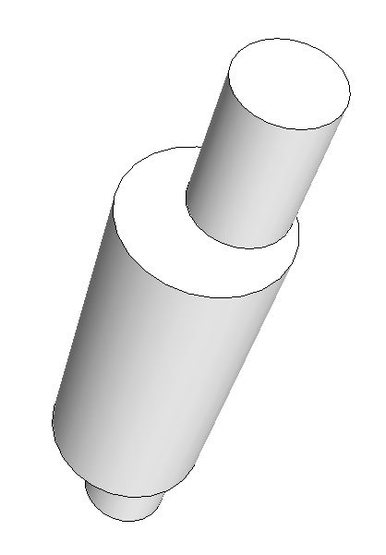 The X4 stacked axle design up close (and slightly exaggerated).

Here the BD design doesn’t have a clear advantage either, but because all small cams are so light to begin with, a saving of a few grams isn’t going to make an impact on the overall weight of your rack.

The tables below compares some of the most popular X4, Alien and Master Cam sizes.

None of the cam manufacturers use the same color/size coding for small cams.  Frikken A. Someone ought to pass a law that makes them coordinate cam color sizes. DMM chose the BD color scheme when they came out with their Dragon cams, why couldn’t BD follow suit and choose the Alien or Master Cam color coding? The European Union passed a law that as of 2014 all cell phone chargers need to be interoperable, someone ought to write to President Obama and do the same thing for cams.   The good news is that the larger X4s use the same color scheme as the C4s.

The smaller X4 cams worked just as well or better than my Aliens or Master Cams.  They are smoother and the trigger armor makes them better than the Metolius Master Cams. I found them easy to place, and easy to remove, across all sizes. I didn’t take any falls on them though. Maybe next time. 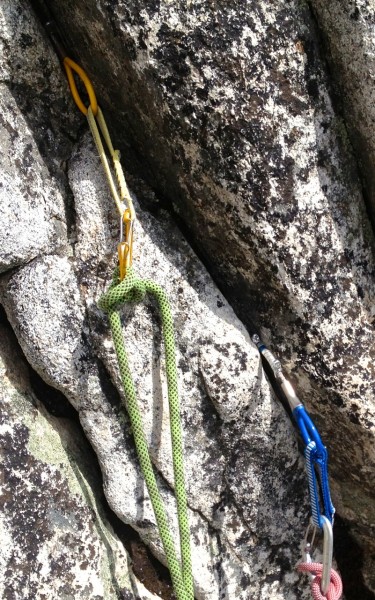 Yellow Alien and Blue X4 in the same crack.  They are the same size.

The larger X4 cams compete with BDs own 4 or DMM Dragon cam. The only real benefit is a narrower head width.  This is only of benefit in places that have narrower pockets, and not longer cracks like we have in Cape Town. We did find that in Yosemite the pockets, pin scars, etc. are actually smaller, never quite .5 or .75 size, so the standard C4 fitted perfectly.  The armored trigger sleeve does make the larger X4 more rugged than the C4. From our shop experience we know that the C4 trigger wires do bend, buckle, get snagged, fray and eventually break, so a X4 should last longer. 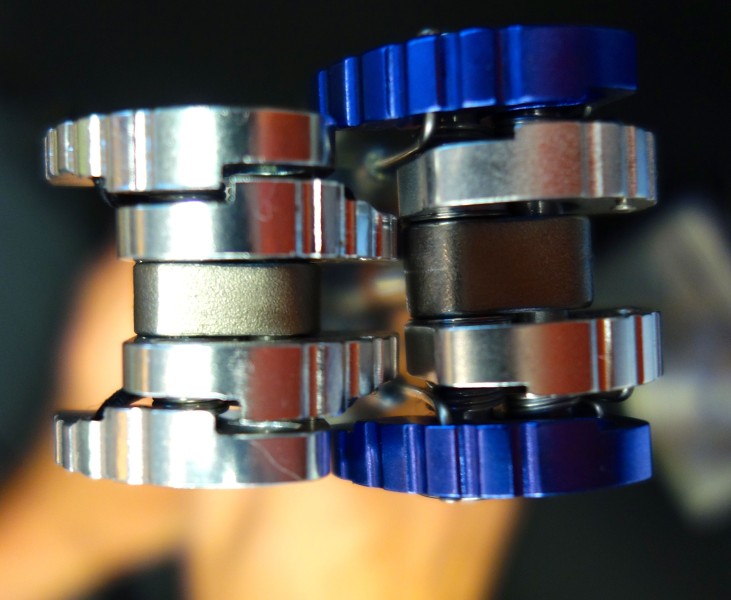 The X4 head (left) is a lot narrower than the equivalent C4 design (right).

Overall, I think the X4 is a great design. BD does make a rather sweeping statement with their claims of larger range, smaller head width, and less weight. This may be true vs. it’s own C3 or C4 cams, but isn’t true across the board when compared to Aliens or Master Cams. Nonetheless the X4 is an excellent product. If money were no object, I would recommend them unconditionally.  But money is always an object. And the BD X4 is R930, vs. R775 for BDs own C4, or R585 for the Metolius Master Cam. That’s a huge difference, almost 60%.  So if you were on a budget and are buying your first trad rack I would still consider the Master Cams for smaller sizes, and the BD C4 for larger ones.

If you are buying your 2nd set and want maybe a bit more versatility (for smaller pockets) then by all means spend a bit more and get an extra X4 or two.

And if you already own a set of Aliens, and want a 2nd set or a replacement unit I would probably stick with them. The Alien design is now almost 20 years old but still works great. The X4 is clearly a better and more modern design, but in Yosemite, the Aliens still worked fine for me. In fact at the end of our trip I found myself racking up with Aliens if I knew the climb was going to test me – in tense situations where you have to be quick at placing gear I just couldn’t see myself figuring out what the new X4 color was for a particular crack size. 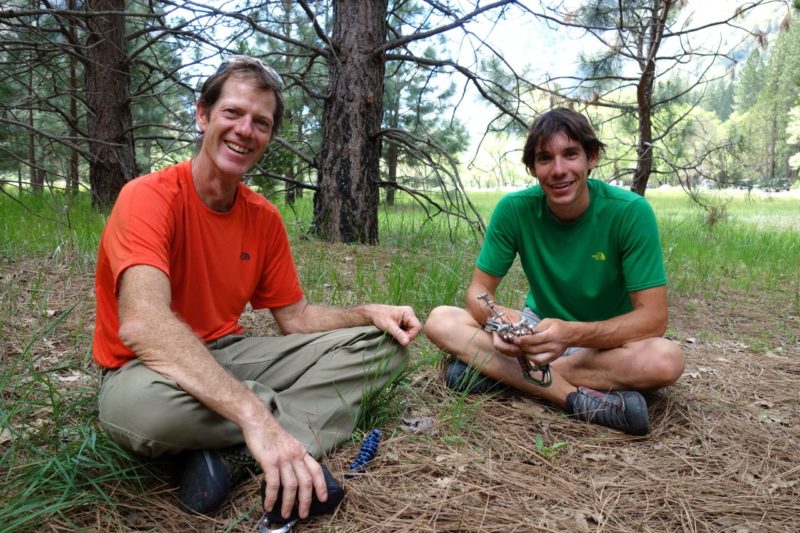 Alex Honnold and I discussing the pros and cons of free soloing with X4s. Alex: “I am super-psyched about these new BD babies”.

And yes we got all of the above cams in stock. 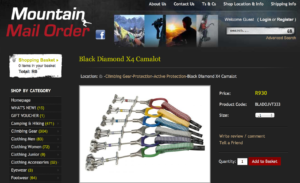 I thought I would add a close-up shot of the cam lobes of the BD X4 (top), Master Cam (left) and Alien (right).

You can clearly see the different textures of the metal, and the tread pattern, or lack of. The X4 has no tread at all, whereas the Master Cam has serious grooves cut in it.

Alien uses very soft dull alloy, while the BD and Metolius cams use a much harder polished shiny aluminium alloy. 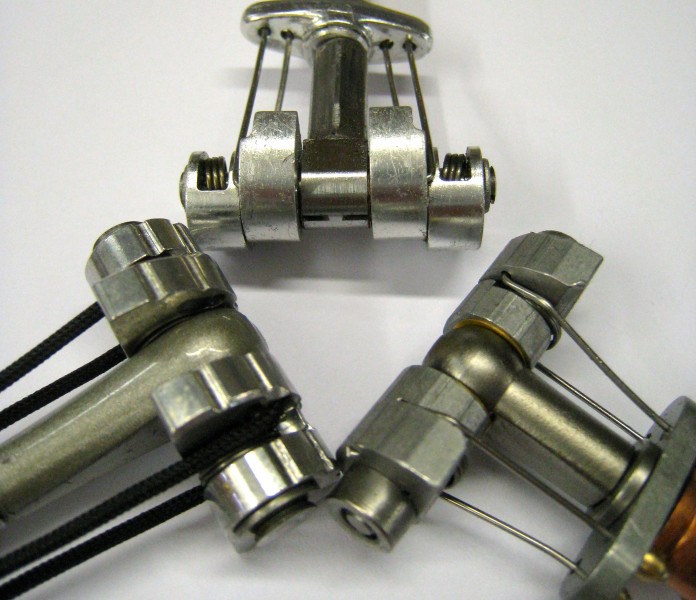