“Was it a Top 100 night?”  Ian and Arno wanted to know.  Guy Paterson-Jones and I had topped-out on Klein Winterhoek after climbing the legendary Oceans of Fear then raced down to link up with Ian and Arno who had climbed the frontal route.  One big difference was that Guy and I had spent a grim night hanging in our harnesses on the wall and the guys wanted to know if it made it into my list of worst 100 nights on mountains.  (It didn’t). 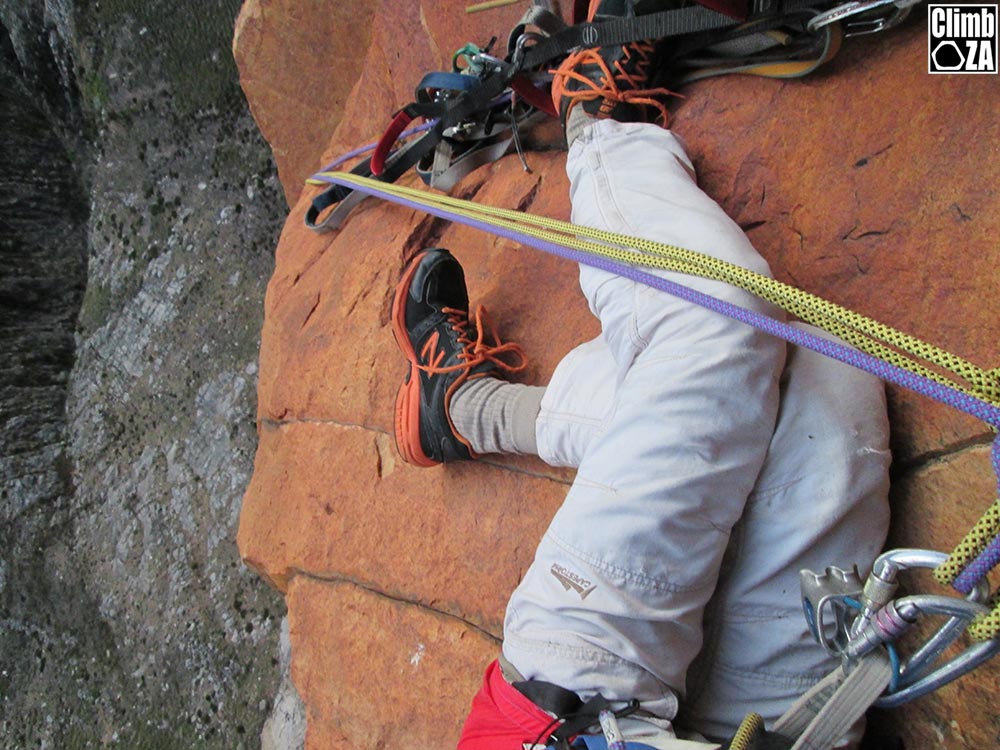 Not so bad… Hilton’s bed for the evening stay over.

Guy and I were pretty-well broken after a tough 36 hours on this incredible route and I am tired as I write this, but this is a recent story that has its beginnings a long way back.

David and I couldn’t hold our alcohol.  My brother was 19 and I was 18 when Tarquin Holt produced a bottle of brandy which we polished off around a camp fire at the original Klein Winterhoek campsite that George Londt and colleagues had used in 1920 when they made their legendary first ascent of Klein Winterhoek Frontal – at the time one of the leading routes in the world.  Tony Lodge was an older straight-laced teetotaler and wasn’t impressed by our drunkenness.  The next day, 14 October 1979, the four of us raced up the frontal route and we had our first sighting of the monstrous overhanging amphitheatre around the corner to the right.  We were gobsmacked. No, something much more… Dave Davies and Hilton Davies at the campsite during 1985

Ten weeks later Tony was dead.  And having taken a long leader fall on Table Mountain onto my brother John, which almost killed John.  With tears streaming down my face I had soloed to the scene and lowered Tony’s savaged body to the ground and then assisted with the rescue of an unconscious older brother. 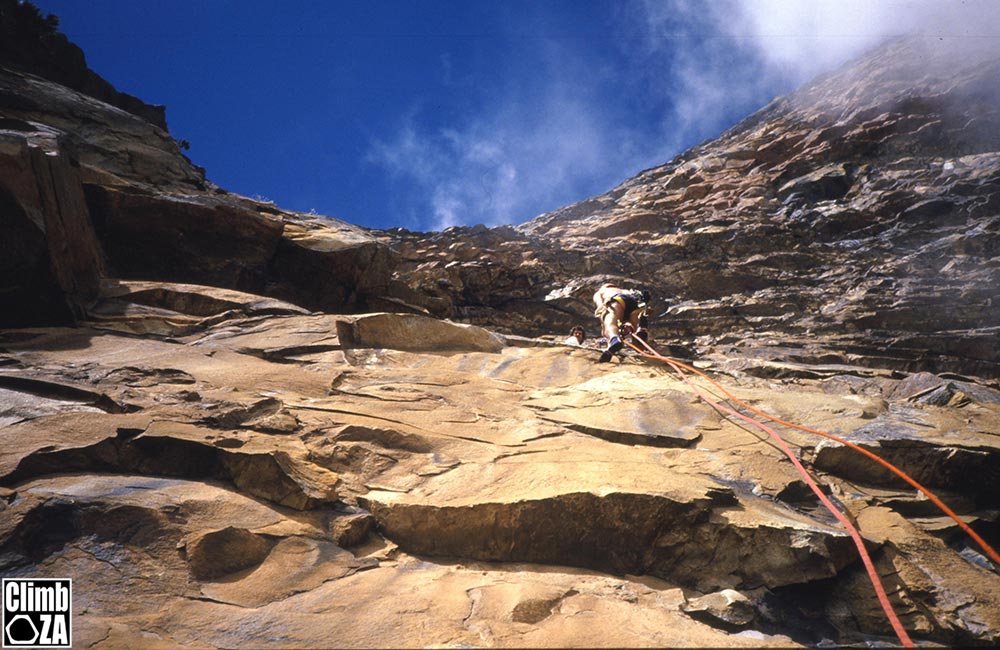 With John convalescing in the embrace of the family home, David and I were back on Klein Winterhoek high up into the massive, horrifying overhanging wall.  A week earlier I had begun my first year at UCT and a few weeks before that David had finished with his compulsory two-year stint in the damned military.  We carried heavy, climbed hard and got mauled.  On 21 February 1980 we turned tail and began our abseils off the wall.  After several days of big effort the heat wave fixed us good and proper.  Down at Tulbagh the temps were in the forties. On the wall I’m sure we were looking at 50° C.  At the base of the wall we stripped naked and emptied our water stores over each other’s hyperthermic heads.  How we might have done in milder conditions is anyone’s guess.  It was tough going as we were disciples of Dave Cheesmond and Tony Dick, and this means we didn’t use pitons.  And we didn’t have cams yet – they would only make their appearance in another year or so. 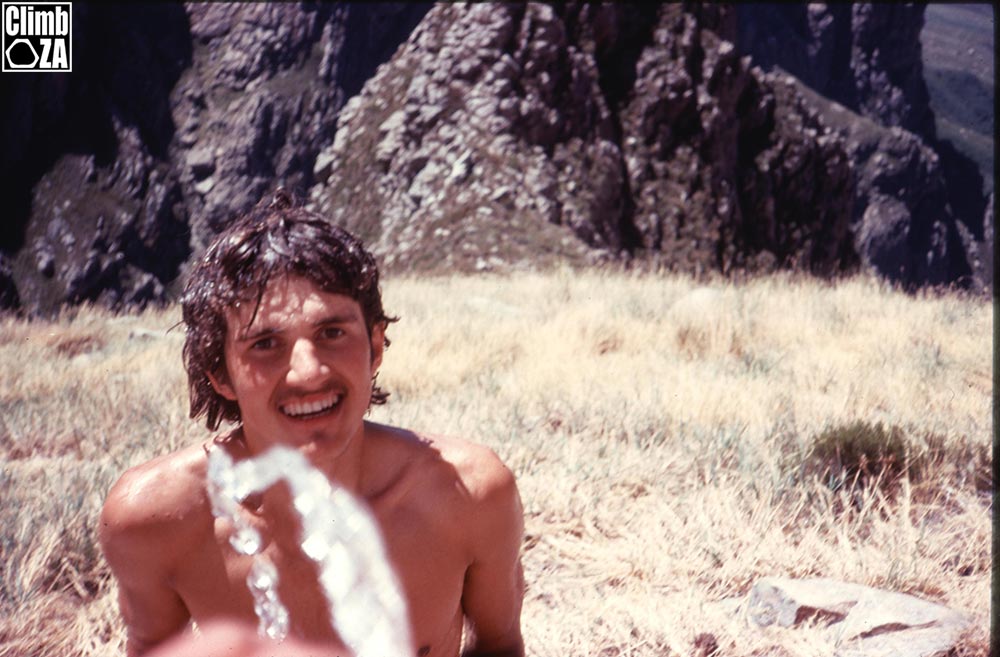 Hilton getting watered down after having retreated off the Oceans first ascent attempt in 1980.

Although Dave and I had pushed up the amphitheatre into virgin territory, this wasn’t the first action in the area.  A couple of years earlier our buddies Dave Cheesmond, Chris Lomax and Greg Lacey had done a bracket-route around the right side of the amphitheatre that skirted the big overhangs.  They had spent two days on the wall on their opening ascent of The Times They Are A-Changing.

Oceans of Fear.  My god.  What an incredible achievement.  Greg had returned with the 16 year-old wunderkind Andy de Klerk and together over quite a number of days they made the first ascent of the amphitheatre by their legendary route Oceans of Fear.  Just boggling.  What a route.  What a fear-trip.  Dave and I were bleak.  A few months later Chris was to watch Greg die.  We were bleaker. 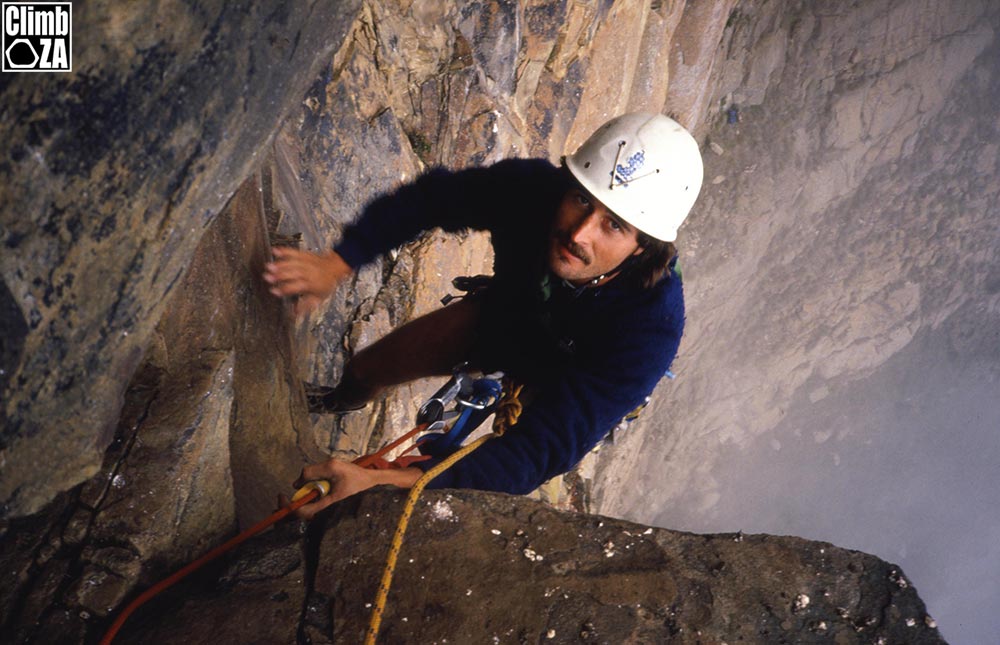 Dave on a new line left of Oceans.

After the first ascent Andy had done the route again, with Wayne Claussen drafting him.  After the Alpine accident Andy then did the most stupefying and stupendous thing when he soloed Oceans as his tribute to Greg.  (Not long after Wayne pushed beyond the limit in a sump-dive in Cango IV).

Dave and I were back in 1985, this time with our old friend Andrew Lainis as well.  We had all done a lot of big stuff in the intervening five years.  David had climbed most of the famous routes in the Alps with John, and done a bunch of El Cap and Half Dome routes.  He and two buddies had done their massive first ascent of the East Face of the South Tower of Paine in Patagonia while John, Chris and I at the same time did our first ascent of the colossal East Face of Paine Grande in the next valley.  We did the hard yards by doing several days of ferrying gear from the orchards to the rock face.  Things went swingingly and we were determined to do a big new route to the left of Oceans. 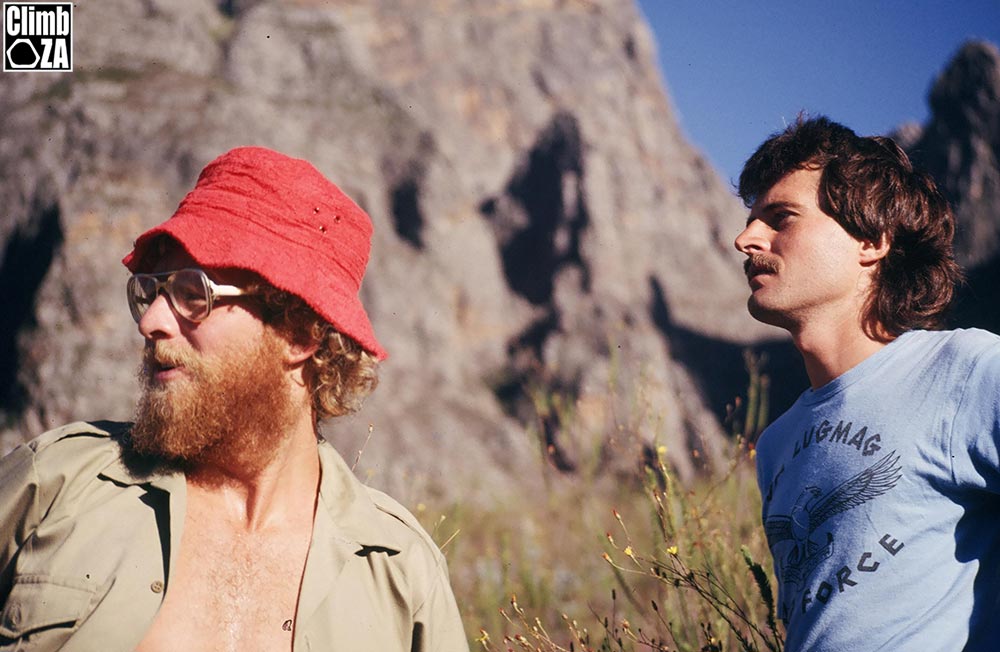 We based ourselves at High Camp beside the river and each day we pushed up the wall and fixed ropes before abseiling down and scrambling back down to camp for the night.  On one occasion we made our camp fire too big and came very close to losing control of a mountain fire.  But aside from that things went well for a few days; although I felt a bit hard done by each evening when David and Andrew would climb into their state of the art, locally-made Three Spears Gore-Tex bivvy bags.  I would slither into my big orange Karrimor plastic bag and suffer all sorts of abuse.

Our hot and sultry summer adventure took a turn though, in those less-connected days ten or eleven years before cellphones.  In the middle of one night clouds came scudding in and the heavens opened up.  Torrents of rain came down.  Snow fell.  Rain and sleet bucketed down.  David and Andrew’s bivvy bags leaked like sieves.  My giant shopping bag was an incredible sound chamber but repelled all H2O.  David and Andrew went hypothermic as their down sleeping bags became enormous sodden sausages. 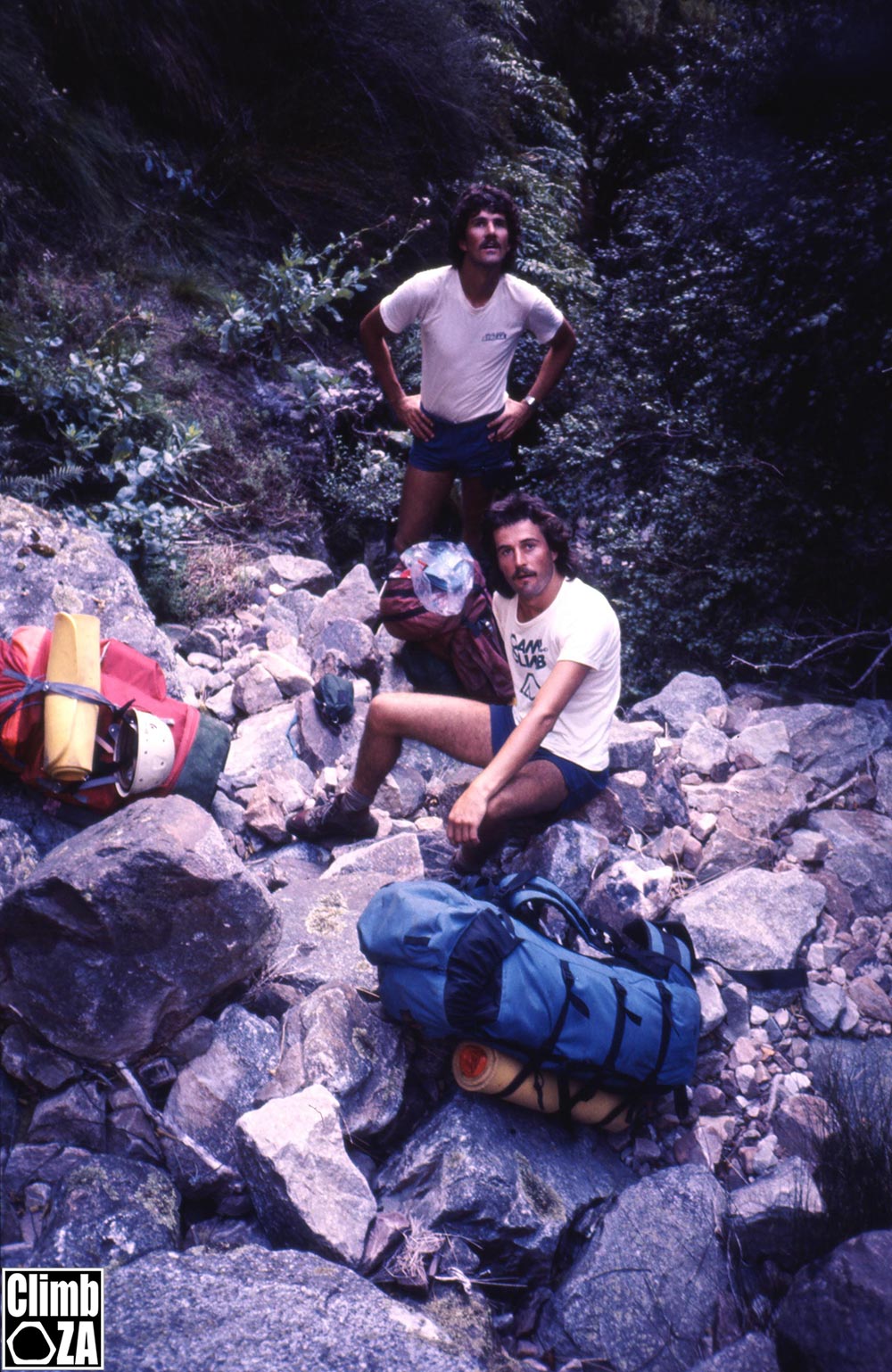 The noise was too terrible.  David and Andrew would not shut up.  All I wanted was to sleep.  But these two blokes were sure they were facing a horrible death.  They kept doing frantic exercises to keep their core temperatures up.  Eventually at first light they made me pack up and join them high-tailing it out of there.  We slid down the slimey slopes in the rain and headed for home between the mountain ranges blanketed in snow.  A week later Andrew flew out to Alaska.  A week after that David and I dragged ourselves up Klein Winterhoek, jumarred the lines, and abseiled down to face a very heavy carry out.  We were well-bleak.

Fast-forward to February 2012.  After a break of 27 years I was just about over the traumas and returned with my buddy Neil Havenga to do The Times They Are A-Changing.  It was big, hard and scary – in other words fantastic.  We had a blast.  A month later I was back with my buddy Guy Paterson-Jones and we did a stellar first ascent bracket-route on the left that we named Rapture – and it is rapturous.  A month later Guy and I were back to do Oceans.  But guess what?  That hot night turned into a massive electric storm and while lighting slammed into the peaks surrounding us, making us quake in our cots, rain came down on us like a garden sprinkler. 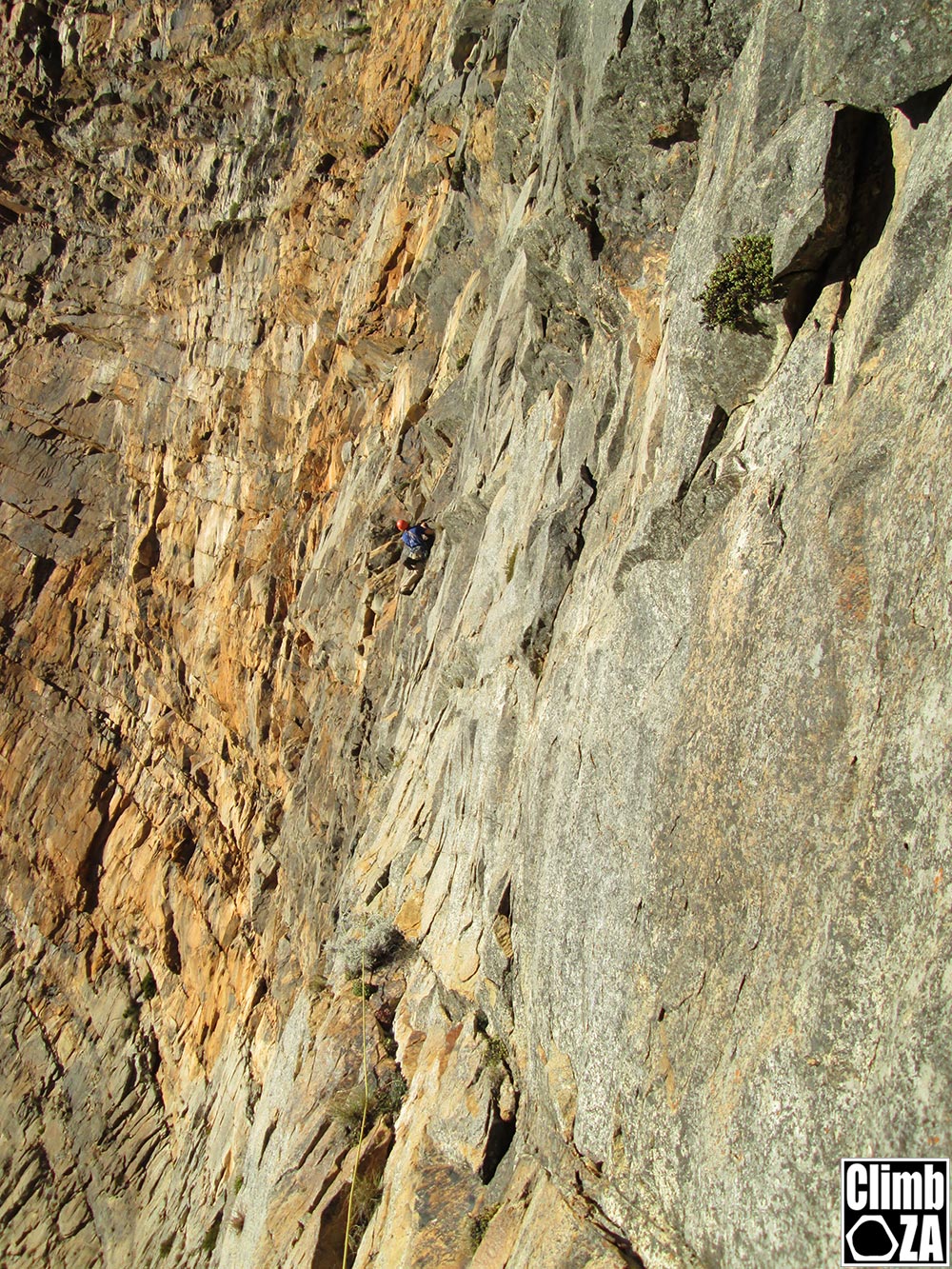 It rained until our 4am alarms went off and we went back to sleep.  It was raining at 6am when we felt compelled to do something.  By the time our mission was dead and buried at about 8am the skies cleared and we had a beautiful day.  We did a miserable hour-long scramble up to the amphitheatre to retrieve the sodden climbing gear we had carried up there the evening before and returned to almost tearful coffees at High Camp.  To salvage something we did a new route straight out of camp up the fin that I had often looked at.  This gave an 8-pitch new route that we called Rainy Day Ridge.  We went home.

Ian Slatem and I made a trip up this big hill a month ago to carry gear in.  A week later Guy and I hiked in to do Oceans, and guess what?  We were rained off.  Thanks. The forecast said sunny skies with some cloud.  Thanks for that too. 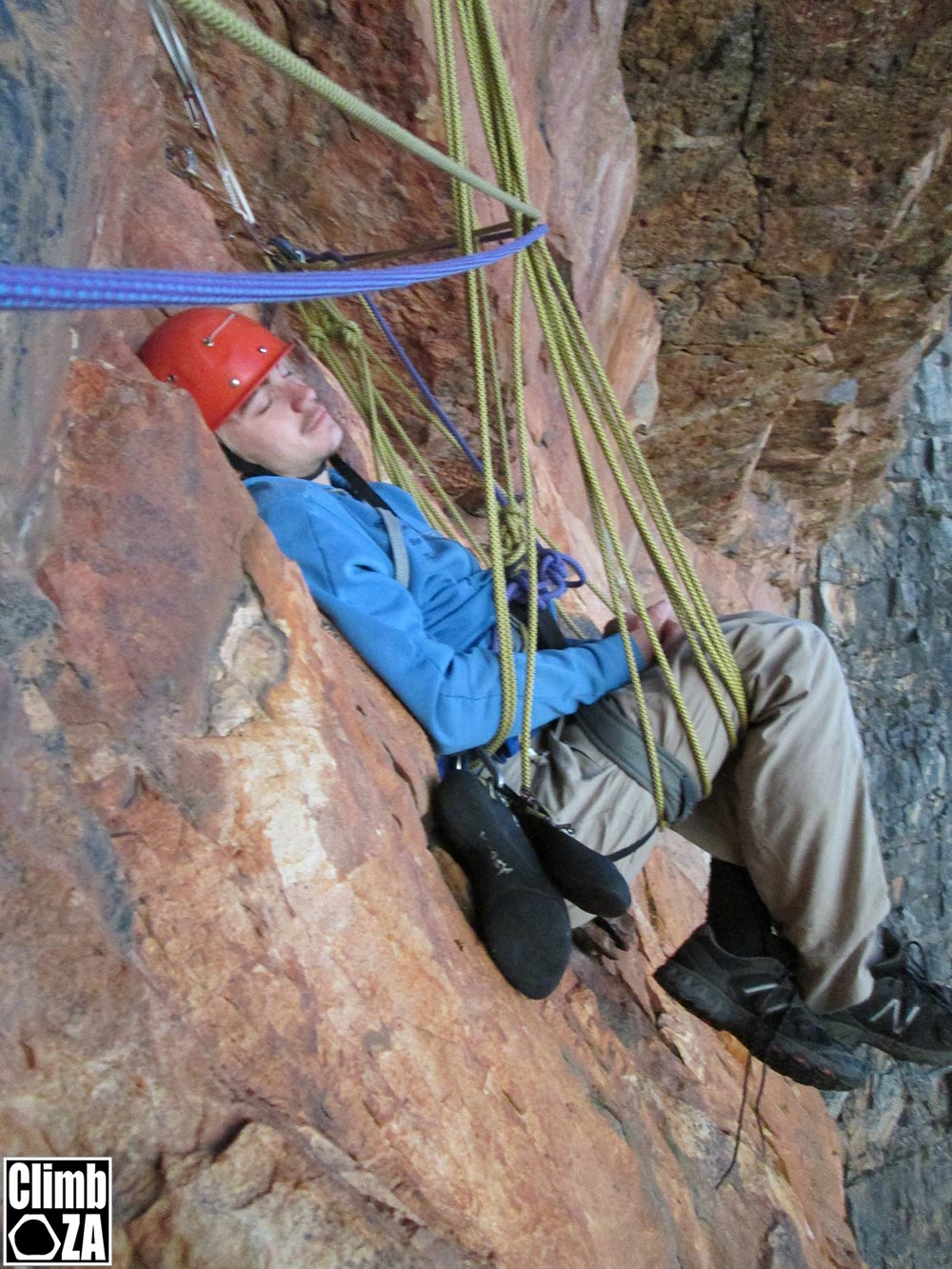 Guy’s bed for the evening on Oceans of Fear.

22 February 2014.  Thirty-four years, to the day, after the first attempt, I finally climbed Oceans.  And it’s all been worth it.  What a route.  What a journey.  What a mission – I could cry.  And what a pleasure to climb it with my great buddy Guy.

Our ascent wasn’t perfect.  I’d brought way too little gear.  We should have had doubles of all the mid-size cams which we didn’t have.  That cost us quite a lot of time and gave us a lot of extra horror, as if there isn’t enough.  I would have to back-climb to harvest gear, free-climb stuff that should have been aided, and make an extra belay stance or two hanging from two cams out in space. 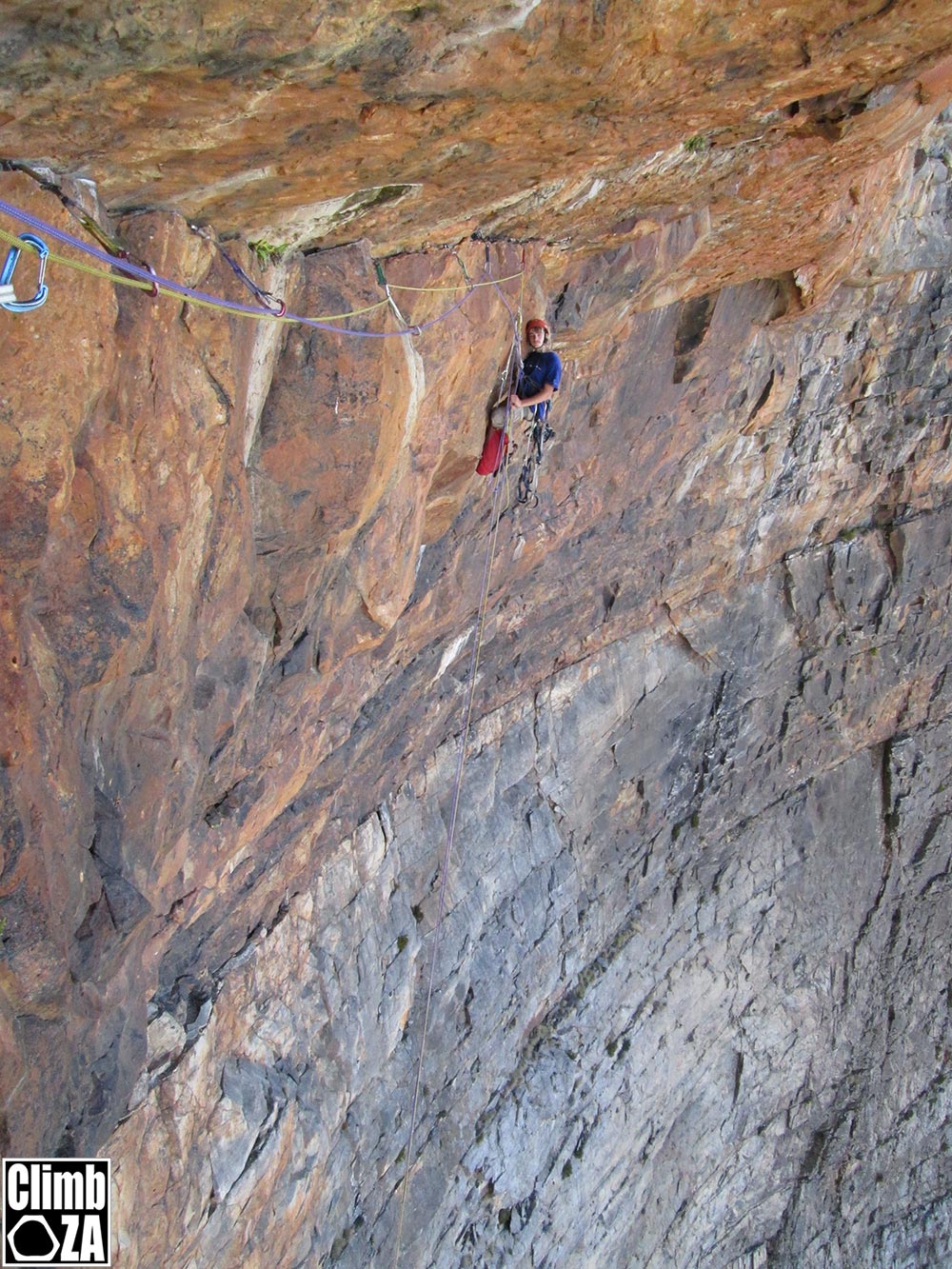 Just another day at the office… Guy hanging out. 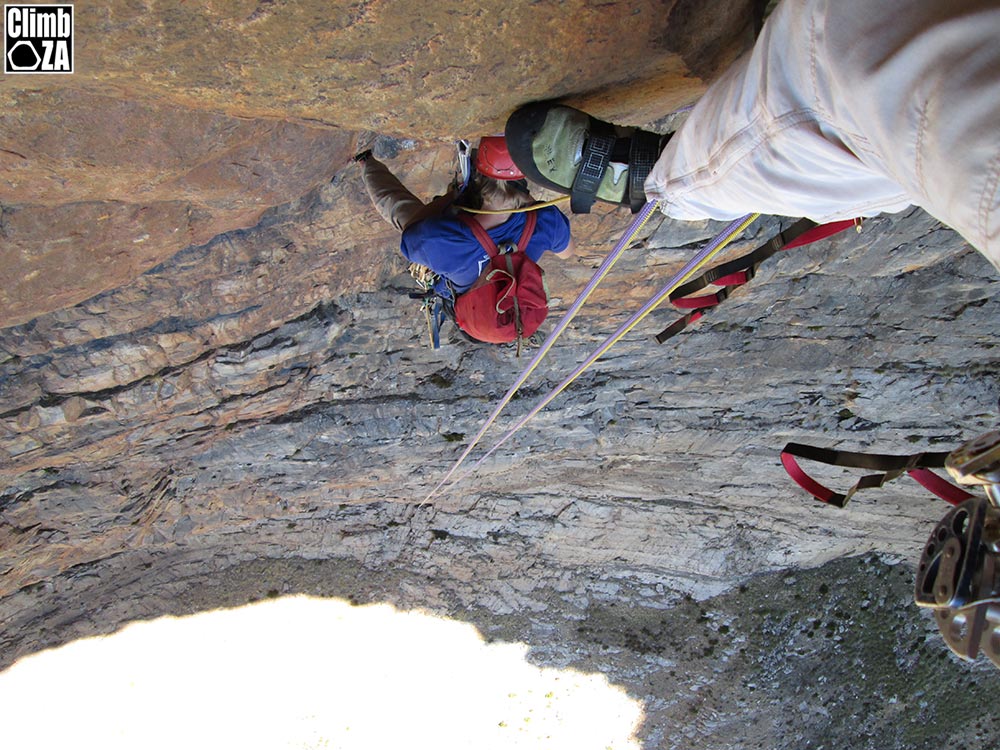 Guy and ropes hanging below Hilton. 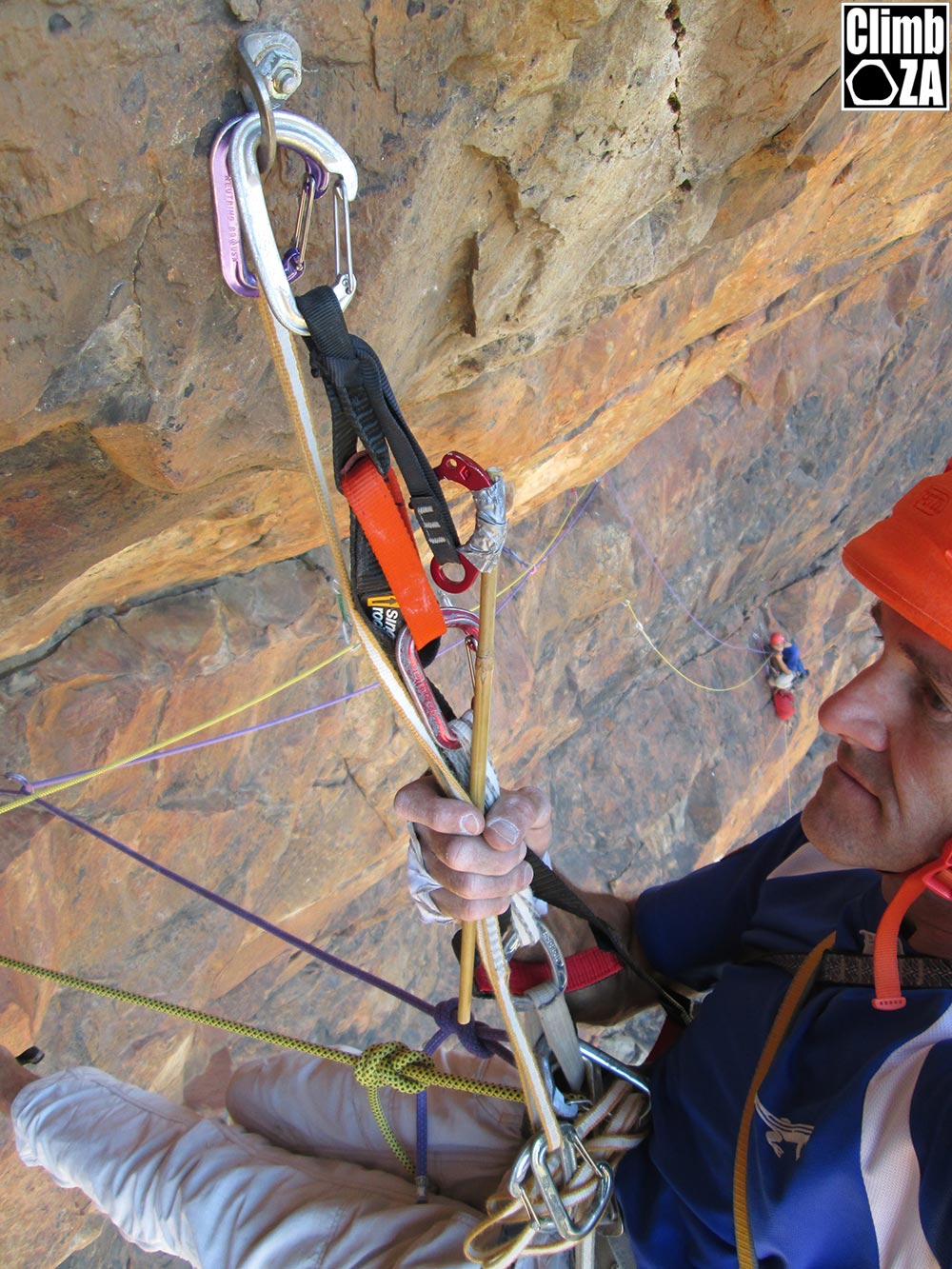 A selfie of me hanging on a bolt with Guy in the background. 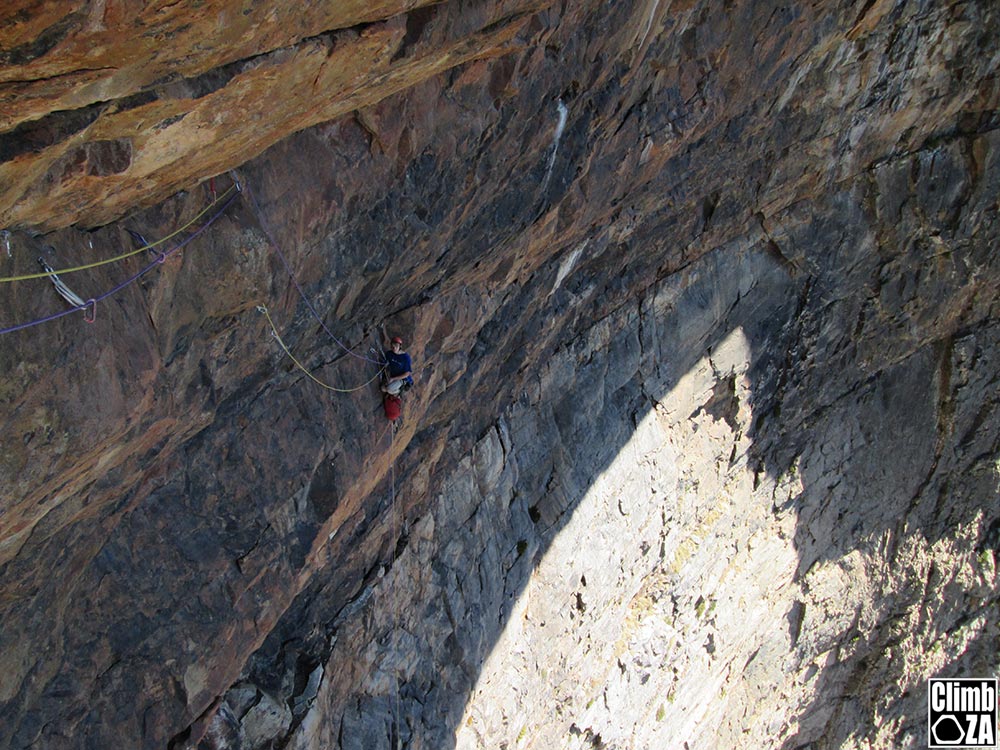 The ‘Hooks’ pitch with Guy below – lots of exposure!

Also our ascent was exactly two months later than it should have been.  The longest day of the year is 22 December and 22 February is 90 minutes shorter.

Guy and I had gone light in pursuit of high ideals – Oceans, onsight, in one day.  Our strategic errors cost us, and we spent a miserable night hanging out in space on the wall about 1000m above High Camp.  We knew this was a strong possibility but we’ve done these tough nights out many times and know that we survive them – and it wasn’t a Top 100.  Maybe Top 500…

Oceans of Fear and Art of Hearts. Photo by Joe Mohle

Hilton and Guy at the summit at last.

Guy Hiking up to the summit of Klein Winterhoek

Guy topping out on Oceans of Fear.

Guy’s bed for the evening on Oceans of Fear.

Not so bad… Hilton’s bed for the evening stay over.

Just another day… Guy hanging out at the big rail.

Jumarring up fixed lines in 1985

Guy and Hilton at camp.

The ‘Hooks’ pitch with Guy below.

A selfie of me hanging on a bolt with Guy in the background.

Guy and ropes hanging below Hilton.

Dave Davies and Hilton Davies at the campsite during 1985

Dave and Hilton take a break on the walk up.

Hilton getting watered down after having retreated off the wall.

Dave looking for his pants 😉

Abseil retreat off the wall in 1980

Leo Holding on the ‘Hooks’ pitch (28). Photo by Alastair lee 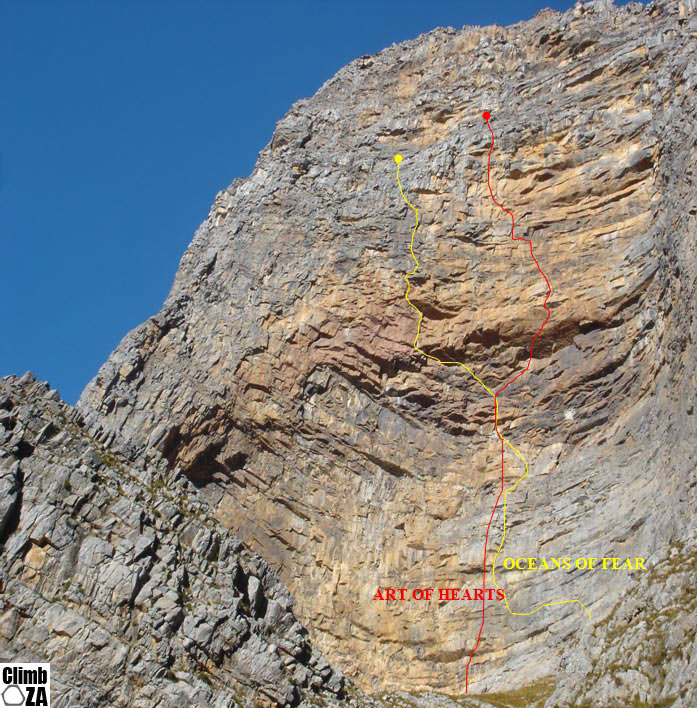 Oceans of Fear and Art of Hearts. Photo by Joe Mohle

37 Responses to Oceans of my Life