Rock Climbing is probably one of the most esoteric activities in the world with everyone having a personal “take” on it.  The very nature of climbing is that it is as infinitely nuanced as the rock is on which it takes place.  Climbing lore abounds with lies, tall tales and interpersonal strife especially at the “cutting edge” of the sport (if indeed it can be called that) not least of which are the almost annual debacles that occur on Mt Everest.  We all, I suppose, want to be acknowledged and to leave a legacy –preferably an honest and favourable one unlike Maestri who bolted Cerro Torre.  And we all have our way of going about it.

Climbing traditionally had no defined rules, only a loose set of ethics that vary from time to time and place to place.  In the past everyone had their personal preference, favourite place and particular style and we created and modified the rules to suit ourselves.  The rapid and dramatic commoditisation of climbing in the last 30 years or so has made it accessible to millions of people who frequent not only the rock faces but the indoor climbing gyms with over 5 million members in the USA alone.  Sponsors and the media now dictate the rules and the climbing “athlete” has emerged.  These climbers spend a huge amount of time kow-towing to their puppet masters and climbing with a camera lens pointed at them.

The commercialism of climbing has all but killed the adventure.  Everest has become every person’s mountain with children, grannies and “disabled people” doing annual ascents.

Fixed gear is mostly the norm on rock routes that are contrived through the most unlikely blank sections of rock with bolts, not features, defining the line.

Recently the Jeopardy wall on Table Mountain seems to have captured the imagination of every climber that is capable of climbing those grades and Klein Winterhoek Amphitheatre’s virtues have been extensively extolled on our web pages.  Both climbing venues can be considered home to some of the iconic trad routes but it is an extreme irony to me that both areas rarely get on-sight free ascents.  “Oceans of Fear” has never been on-sighted and its trad status is questionable in that many of the hardest moves are protected by bolts.  The routes on the Jeopardy Crag are (almost) invariably head pointed and all 3 of the cruxes on the original Jeopardy are protected by fixed gear.

One thing though, that has endured over the last 100 years in the broader trad climbing community is the concept of the “classic” climb.  Most of these classic climbs are not particularly hard and nowhere near “perfect” but by and large see far more ascents than the harder routes.  You will not read much about them in the media.  One only has to think of Nutcracker in Yosemite, A Dream of White Horses in the UK, Arrow Final on TM and Exposure in F Major and Northwest Frontal in Du Toits.  These routes have stood the test of time and the climbers who fashioned the first ascents have left a fine legacy for others to admire and try to emulate.  These are climbs for the ordinary man, not the career climber or the outlier sponsored athlete. 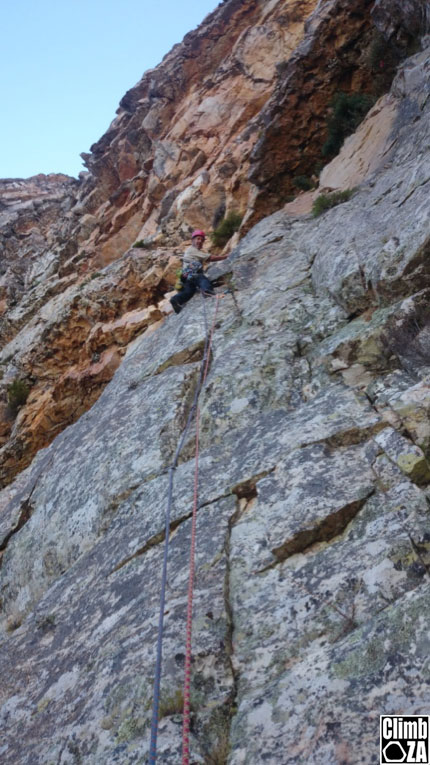 I have been trad climbing for 38 years or so and I have been searching for the (near) perfect trad climb for about 35 of those years and I think I may have found it.

But First:  What is the perfect trad climb.  Of course this is open to debate and this article hopefully will be stimulating in that regard.

Here is my take:

1.         It must be broadly appealing and easy:  I have done first ascents of several routes that I used to consider to be my best at Blouberg and Yellowwood and elsewhere and they all fail as they are too remote, too hard or too scary or all three for most ordinary people to do – and that means me too because I dumbed some of them down with fixed gear and by and large “head-pointed” them.  Not one of these routes have had an independent ascent during their existence that ranges from 3 to 17 years.  The perfect grade for the perfect route should not be more than say US 5.7 or 5.8, British HVS or E1 5a, French 5a or b.  And SA and AUS 17/18.

2.         It must be an aesthetic line:  The route should ideally follow a stand out feature in the area where it is situated like a crack system, dihedral or arête.  Cape Sandstone does not lend itself to continuous lines so this is a tricky one in the local context but “Smallblaar Ridge” is the winner locally!.  On TM “Africa Arête” is spectacular to look at and Africa Edge is very cool to climb.  “Satisfaction Guaranteed” and “Big Corner” at Tafelberg are obvious lines.

3.         It must be continuously steep on good rock and “safe”.  Classic routes such as “Arrow final”, “Exposure in F”, “Northwest Frontal” and “Eight Miles High” have a history of serious accidents as they all lack in this department.  There must be no hanging stances.

4.         It must have no pin scars, manufactured grips or fixed gear of any kind whatsoever.  One of the all-time “classics” in Yosemite is “Serenity Crack”.  This, like many “free” routes in Yosemite, the Dolomites and elsewhere around the world exist entirely as the result of pin scars.  It is unlikely if any of the major big wall routes on El Cap would ever be climbed free without what amounts to chipped holds and bolts.

6.         It must be of consistent grade and quality.  Very few classic routes are.  I can’t think of one that is that is more than a 100m or so long that is consistently good – top to bottom.

7.         It must be accessible but still require a decent effort to get to and do.  You must get home and feel worked and tired at the end of it.

10.      It must have a bold, wild, airy exposed feel about it even if it is not actually remote.

11.      It must be adventurous.  It must be achievable but success must not necessarily be guaranteed on the first attempt if the grade of the route is at or near your limit.  So it must not be for sissies who fear failure.

12.      The climbing must be varied, funky and interesting – moves must require some thought to work out.

14.      Escape off the route must be relatively uncomplicated although it can have an “epic” aura about it.

15.      It must be on clean rock that does not require frequent ascents to keep it “climbed into condition”.  There are many classic routes in the UK that would be complete choss but for the fact that frequent ascents keep the cracks and gear placements free of mud and vegetation.

Readers are invited to critique or add to this list which is certainly not complete. 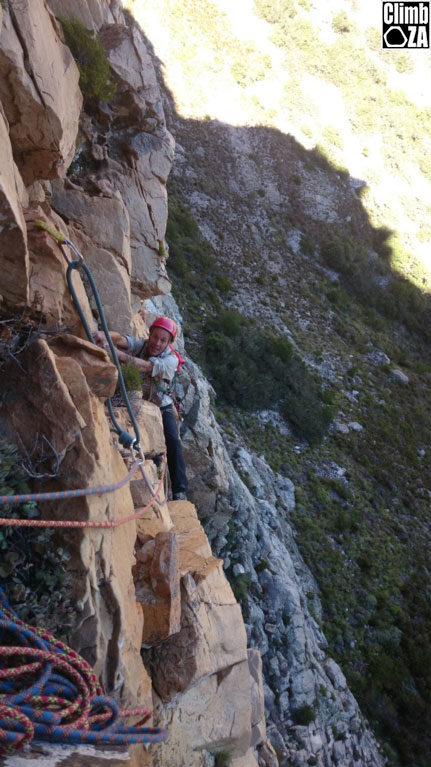 Deon on the second pitch. The rope sling was taken with in case we had to bail!

Recently, Deon Van Zyl and I fashioned what I consider to be the closest to a “perfect” trad route I have personally ever climbed.  In terms of the “perfect line” it cannot compete with Smallblaar’s knife edge line or “Africa Arête” but it is right up there with the best in all other criteria listed.

There is no move that is really harder than grade 17 and possibly even as low as 16.  (I think of the move off the ground and the crux on Atlantic Crag on TM and there is nothing quite as hard as that).  BUT it has more moves of grade 16 or 17 than on any route I have ever climbed.  It just goes on and on and on for around 160m (400ft) of climbing.  It is more consistent than its neighbour route Divine Time 19, it is well protected, has safe comfortable stances but feels totally “out there!”

It requires no special gear; a standard rack with a full set of cams to 3” and nuts to size 10, 6 quick draws and 6-9 slings is all that is required.  It is in the shade most of the morning and experienced climbers will be done in less than half a day.  The descent is down the user friendly abseil route a horizontal rope length walk to the right and I have done the abseil 5 times now without misadventure – once in high wind.

The pub is an hour walk and 5 minute drive from the base – so even condition 16 is ticked.

I have many friends who are passionate about climbing including Margaret my wife and our average age is now 52.5!  Most climbers in the world and especially people my age feel very tested on routes like “Magnetic Wall”, “Atlantic Crag” and even “Jacobs”.  This is a very do-able “big” “bold” route that I would recommend to anyone that has some experience of trad climbing.  I am content to climb and share this route with all my friends.  What could be more “perfect” than that!

Time will tell whether the trad climbing community will put its stamp of approval on this new route and if it will deserve being regarded as “iconic” or “classic” by future generations.

It is at Yellowwood! 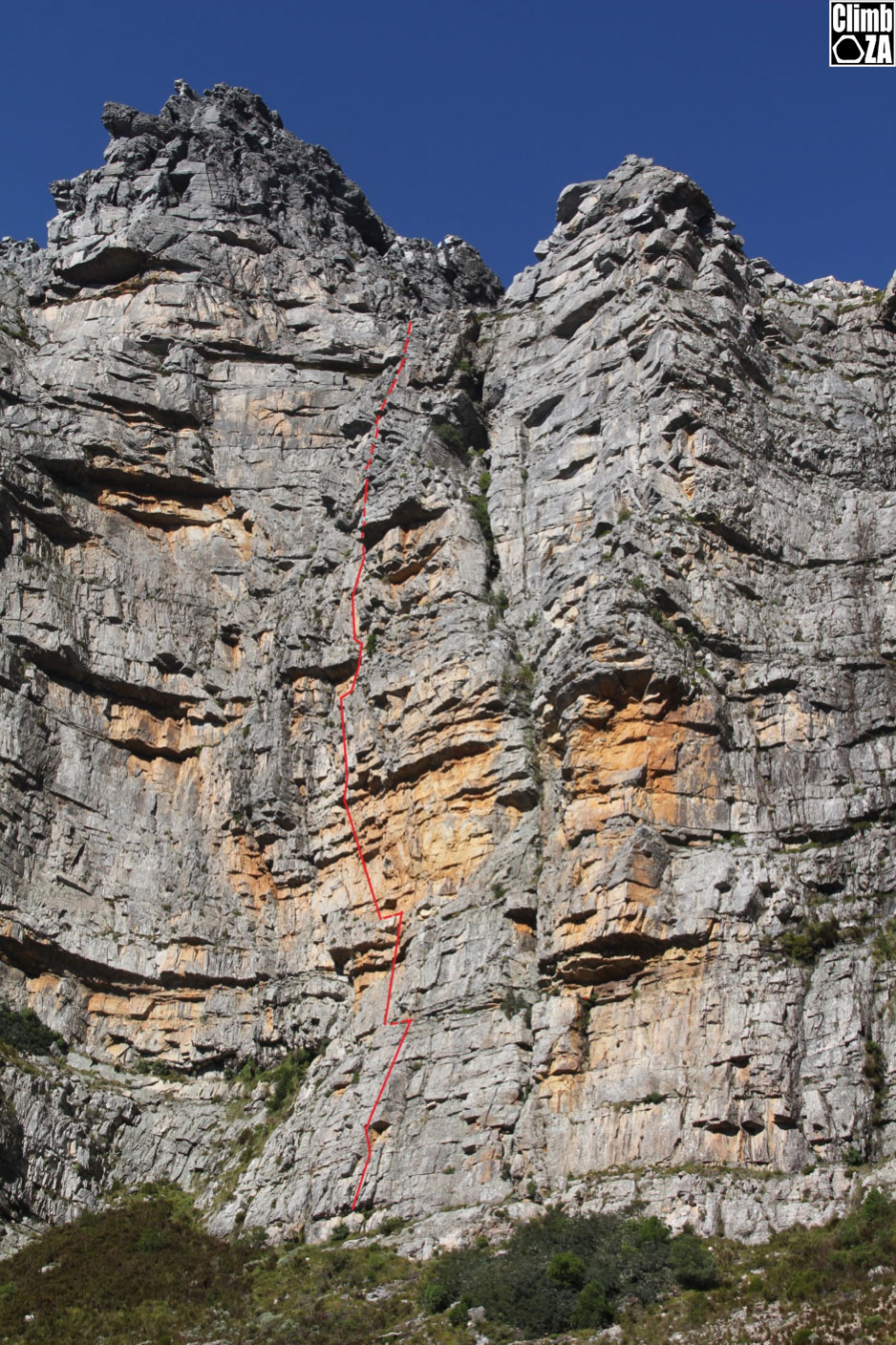 11 Responses to The (near) Perfect Trad route?