You are here: Home › Eastern Buttress Route – How We Spent a Night on the Mountain
Posted by Rudi Scholtz on Sep 18, 2014
9

Having always enjoyed the outdoors, we decided some time ago to try a new route up Table Mountain every sunny weekend and to complement this we joined a climbing gym to start learning basic rock climbing skills.

Last weekend after having completed a enjoyable hike up one of the lesser known and more technical routes starting from the saddle area between Devil’s Peak and Table Mountain (a route known as ‘Ledges’) we decided to attempt going up table mountain via the Eastern Buttress leading up to Devil’s Peak.

As I usually do, I tried to do a bit of research on the eastern buttress route however besides for the route description in the guidebook Table Mountain Classics by Tony Lourens I could not find much written about it online.

There is no clear path, however after searching for a while, we found a very interesting cairn – a flat rock wedged in a tree to create a platform with a smaller rock on top.  From where we could see a very vague path leading up a steep slope until we reach the rock band. 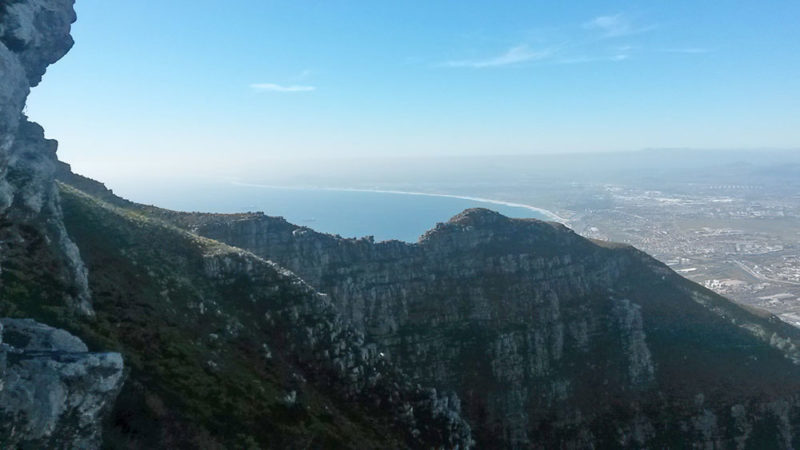 There were no clear indications of the route so we decided to make our way to the right after finding some burnt wood under trees against a rock (Tony in his book described this as a ancient-looking camp site?).  Continuing around the rock band, we found some old cairns, some of which where very overgrown by bushes.

We made it up a slope and got lost in what felt like a forest of prickly stingy bushes with small green leafs known as ‘climbers’ Friend’.

After a long while, we scrambled up some rock steps to the crest of Eastern Buttress where we found a small cairn consisting of two rocks placed on top of each other.  We continued up a little further and at last found a definite cairn indicating that we were back on the route.  The route being difficult to navigate and having taken longer than we thought to get to this point, retrospectively we should have turned back there and then. 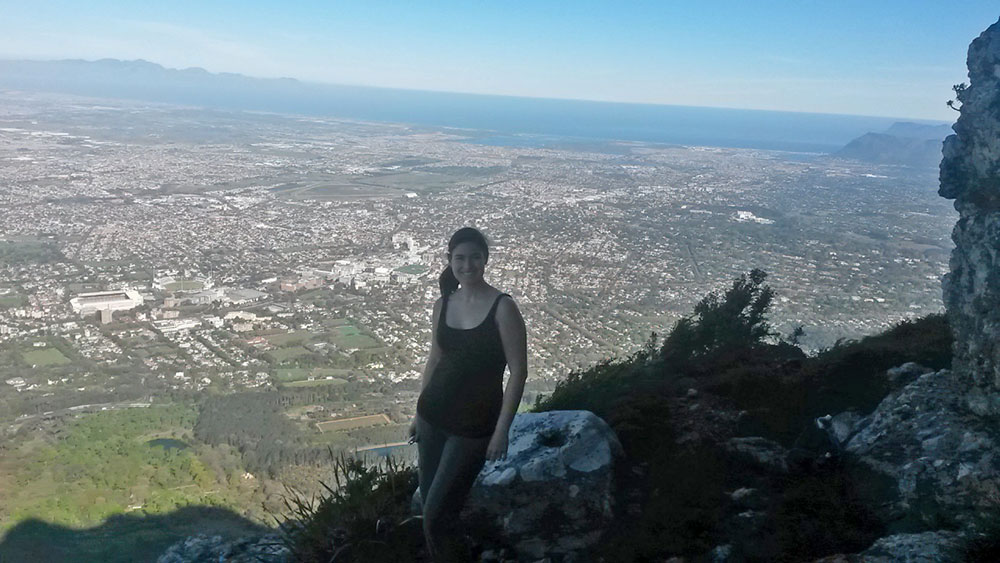 However after finding the cairns and glad to be back on route we made the decision to keep going knowing that we were not far from the top and that it is easier to go up a route than to go down it: especially considering some of the exposed scrambles we did on the route where I felt it prudent to use a rope after a handhold broke free from the rock face.

We made our way up to a point where we could go no further and found a sloping rock with a big cairn on top (although the cairn is weathered and almost looks like a natural formation).  At this point we traversed left as indicated in our guidebook however we could not find any more cairns.  After searching for a while we continued left and reach a narrow gully.  We were not sure if this was the gully described in the guidebook so we went back and forth and without success looked for any signs of the route.

We eventually realized that slippery 3m drop with a waterfall covered with moss that we could see looking into the gully was probably the “little rock step” described in the guide book.  About two meters to the left the gully dropped down with a fall into nothingness and the way leading to the rock step was wet muddy and slippery with plenty of loose rocks to complicate things.

I went first to secure a rope before my wife came up after me – the gully at this point was steep enough that if we slipped and fell we might have carried on sliding down over a dangerous drop.  After a bit of struggling we made our way up the rock and deeper into the gully.  As described in the book we made for the steepest part and traversed to the right onto some ledges.

The gully in itself was beautiful and ended in a waterfall, which I might have thoroughly enjoyed if I was not seriously worried about time.

A warning here to anyone attempting the route – the ledges here have become very overgrown and crumbly, there were no obvious places to secure a rope and the plant growth makes it very difficult to pass safely.

Halfway up the ledges it became very perilous with parts of the ledges having given way and we knew we had to turn around.

We headed back down the gully to the rock step securing ourselves with our rope where I used it to belay my wife down and I abseiled down behind her.  This took a bit of time and at the point that we made our way past this point where the gully dropped down it, we realized that we had about 2 / 2,5 hours of light left to make our way down the mountain.

Remaining on the rope, we carefully made our way back down the crest of the higher part of Eastern Buttress trying to get past the worst of the scrambles before it got dark hoping that we would be able to find our way to the start of the route from where it would be safe to navigate back to Rhodes memorial via flashlight.

Without taking any risks we made it down to an elevation of about 700m where we realized how quickly light was fading and we were by no means past the worst of the rock bands.  It would be very dangerous to attempt further decent without light.

We phoned search and rescue to inform them of our situation and asked for advice.  They assessed the situation by asking some questions and advised that we were to stay where we are.  We sent them GPS co-ordinates and gave them a description of the route to enable them to send out a team to guide us down.

In the process, dusk on the mountain became night very quickly and knowing it could be a while, before we are located we checked on our provisions and luckily we each always carry at least a thin jacket for those unexpected cold moments high up in the mountain.  We had enough water and I had an emergency kit with a space blanket, a flashlight, magnesium fire starter some nougat bars and few first aid items.

I replaced my phone battery with a spare one I always carry with me so we could communicate with the team without worrying about battery life.  By 20:00 the team had an idea of where we were, but no clear visual on our position.  The wind picked up a bit which made it freezing cold.

At this point I would like to say that I am very thankful for the one space blanket and in future will be carrying not only one a space blanket space for each of us but a poncho and a survival bag too.  They are small, extremely light and probably the most important survival tool we had with us.  It at the very least made a cold and uncomfortable situation bearable and if it had been any colder on the mountain it would have in all likelihood saved us from hypothermia. Soon after the team asked us to signal with our flashlight and they were able to get a visual on our position.

21:09 Search and Rescue checked in on us – it was getting cold and they advised us to try and find shelter from the wind without taking any risks.

We were lucky enough to have found a little hole in between rocks that was more protected.  We got as comfortable as possible, covering ourselves with the space blanket and using our packs to insulate us from the cold ground as best we could.

21:30  We saw the search and rescue team arrived at Rhodes Memorial and used our flashlight to signal our position.  They obtained a visual on our position and the team leader Hugo contacted us confirming this.  Realizing we where higher up than initially thought and off the beaten track he advised that in the best case scenario they will take 2 – 3 hours to get to us.

Knowing that we still had to walk down the mountain we drank some water, rested as much as we could remain in contact with the rescue team via the occasional phone call and messages.  It was a bit tricky managing this as the space blanket blocked (cell) reception, which was not the greatest in the first place.  Eventually we found whatsApp messages the most effective with the scarce reception.

While a spotter team was sent to the upper ridge of minor peak the main rescue team made their way to the saddle area to attempt to reach us we ate some emergency provisions (we had small nougat bars with us) and made ready for the arrival of the rescue party.  Fed and knowing that the rescue team knew where we were and was on their way we were in relatively good spirits.
Despite the cold, we enjoyed gazing down at the lights of Cape Town and saw a fantastic moon rise on the horizons.

We waited, it got colder – my estimate is that it was somewhere around 7 degrees. 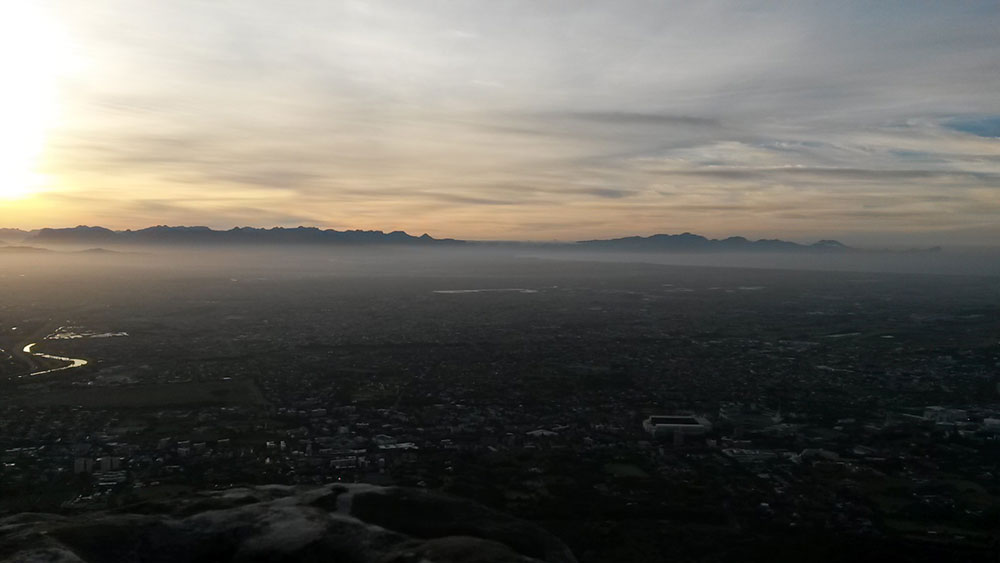 At around 22:00 maybe 23:00 we saw the spotter team on Mowbray ridge and signaled them while the search team made their way down to us – They were 500m above our position.

We dosed as much as we could, we shivered and literally being squeezed between a rock and a hard place we switched positions to get the blood flowing.

02:30:  The team checked in informed us that they are battling with the terrain.  They are 200m above us

02:45:  An evil gully is giving the team problems problems (probably the same one we cold not pass from the bottom) but they were trying.

04:00:  Fog is rising but has not reached the upper slopes – an exhausted team is not far from us but the cliff ledges and boulders are too treacherous.  They cannot go on.

04:05:  A third team is being gathered to try from the bottom and a helicopter has been confirmed for first light in case the team can’t make it to us

05:00:  The coldest part of the night but we are OK, the decision is made to airlift us at first light.

05:30:  The search and rescue team asks for another visual and confirms our position once again.  They will need to guide the helicopter to our position.

07:20:  We move to a safer position for the pickup and start signaling the helicopter with the space blanket.

A big thank you to WSAR (Wilderness Search & Rescue) 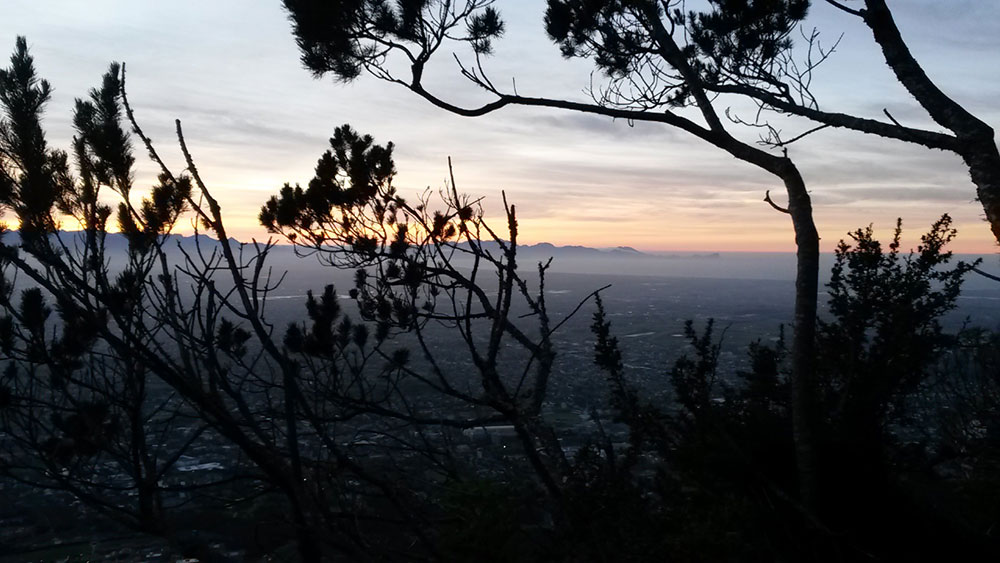 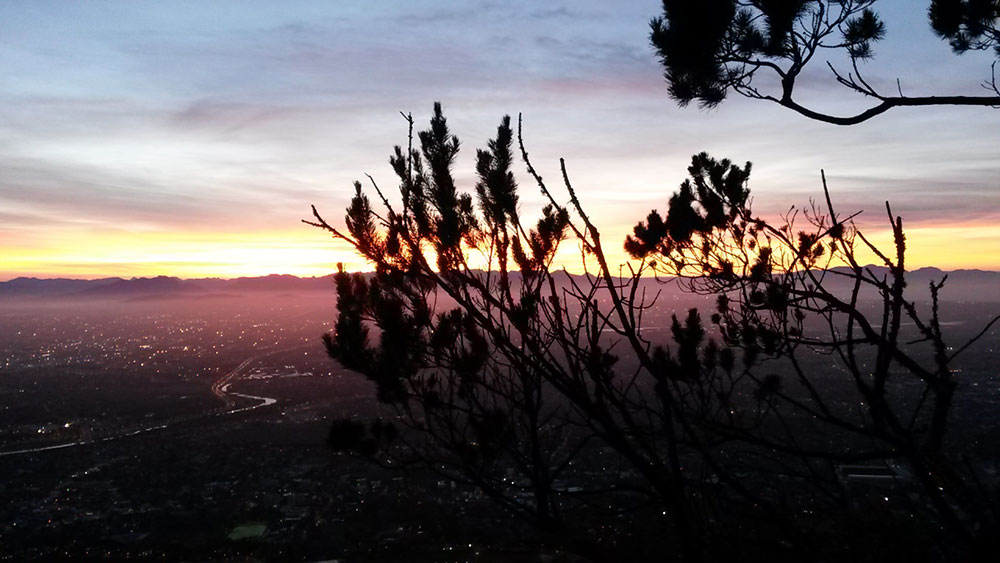 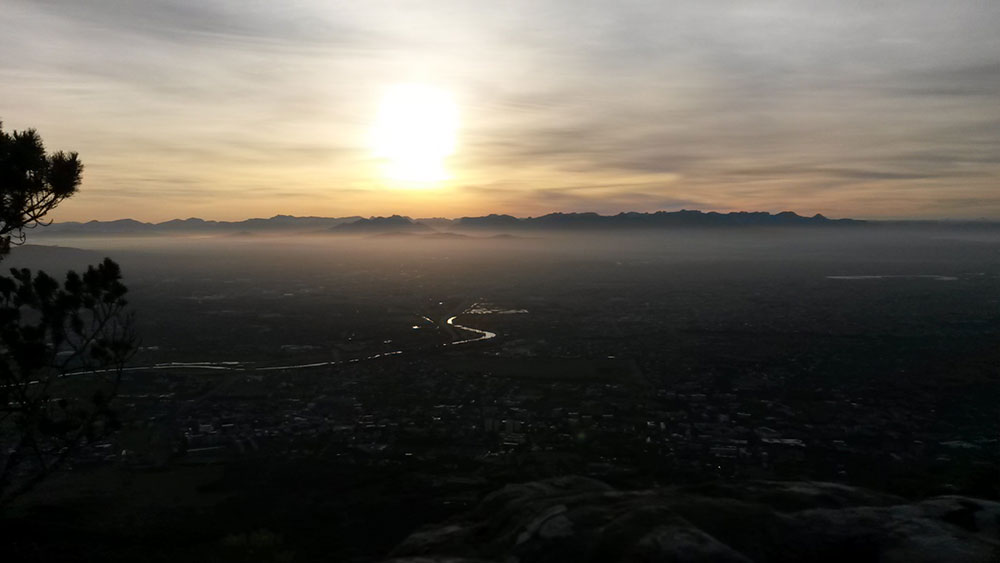 How We Spent a Night on the Mountain