Everyone knows that Rocklands is special and that camping at De Pakhuys in winter is just fantastic.  It’s cold, sociable and has an amazing outback ambiance.  In addition, the campsite has those awesome early morning views when the rising sun bathes those big orange rock faces above the Pakhuis Pass in a glow that promises warmth and happiness.

That main orange face is very special.  In my opinion it is the best winter trad venue in the Cape.  What makes it special? For starters, it is far north of the coldfront-battered Cape Peninsula and is only reached by the really big frontal systems.  Then it faces due East and therefore starts warming up with the very first rays of the day and at an almost-perpendicular angle.  Thirdly, the rock face is at the top of the mountain and therefore doesn’t have any mountain slope above it to act as a reservoir to release vast amounts of captured rainwater over the rock face.  Finally, it is in a really pretty setting absent of freeways and noise.  One should probably add that it has a nearby campground full of really strong and psyched climbers, excellent accommodation at De Pakhuys, Alpha Excelsior, Traveller’s Rest, and has the legendary Hen House coffee bar.  It’s great! 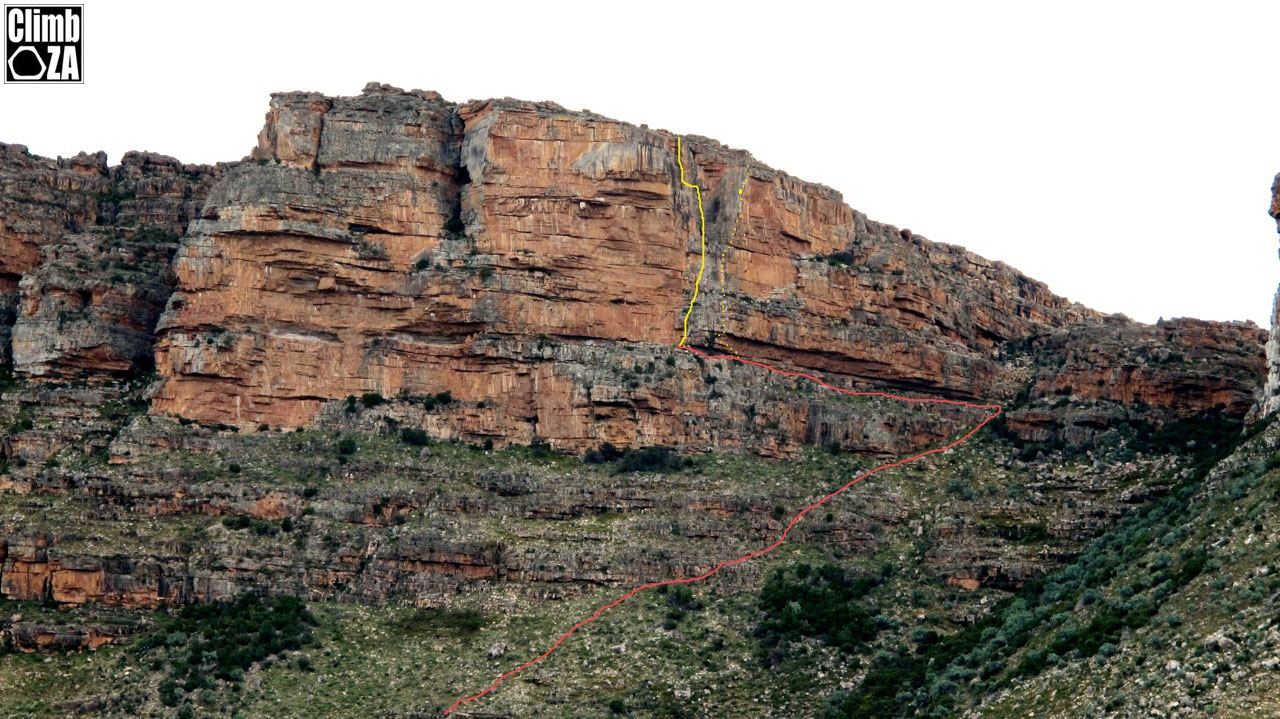 The beautiful main buttress is the middle one of three – Faith, Hope and Charity.  These buttresses were actively climbed in the ‘80s, mainly by Ed February and Tienie Versfeld and Charity Buttress is famous (at least in my household), for being the scene of South Africa’s first base jump.  In ’85 or ’86 Andy de Klerk and Neil Terry lept off Charity with their skydiving rigs and survived.  I was really pissed off.  Not because my friends survived, but because I had wanted to do SA’s first base jump.  To make matters worse, Andy, Neil and Chris Jackson made me do a practice ‘exit’ off a stack of furniture in Andy and Chris’ Mowbray digs and in the process I smashed my wrists on the floor.  In the end I nearly jumped Gouritz Bridge but got thwarted by strong winds.  As a poor consolation I then did SA’s first bridge jump by using a climbing rope stretched out between the two bridges.  I nearly soiled myself and it took years off my life but I digress…

My buddy Guy Paterson-Jones and I first went to Hope Buttress a couple of years ago as there was a tick that I needed.  Many years ago Adele McCann produced a wonderful little book called Cape Classics and in paging through it I found there were a couple of routes I hadn’t done.  This needed fixing, so we went out and climbed this little four-pitch grade 16 route called Butterfinger Crisp.  For a climber who isn’t a grade whore it’s a fantastic outing that I really recommend. See topo below. 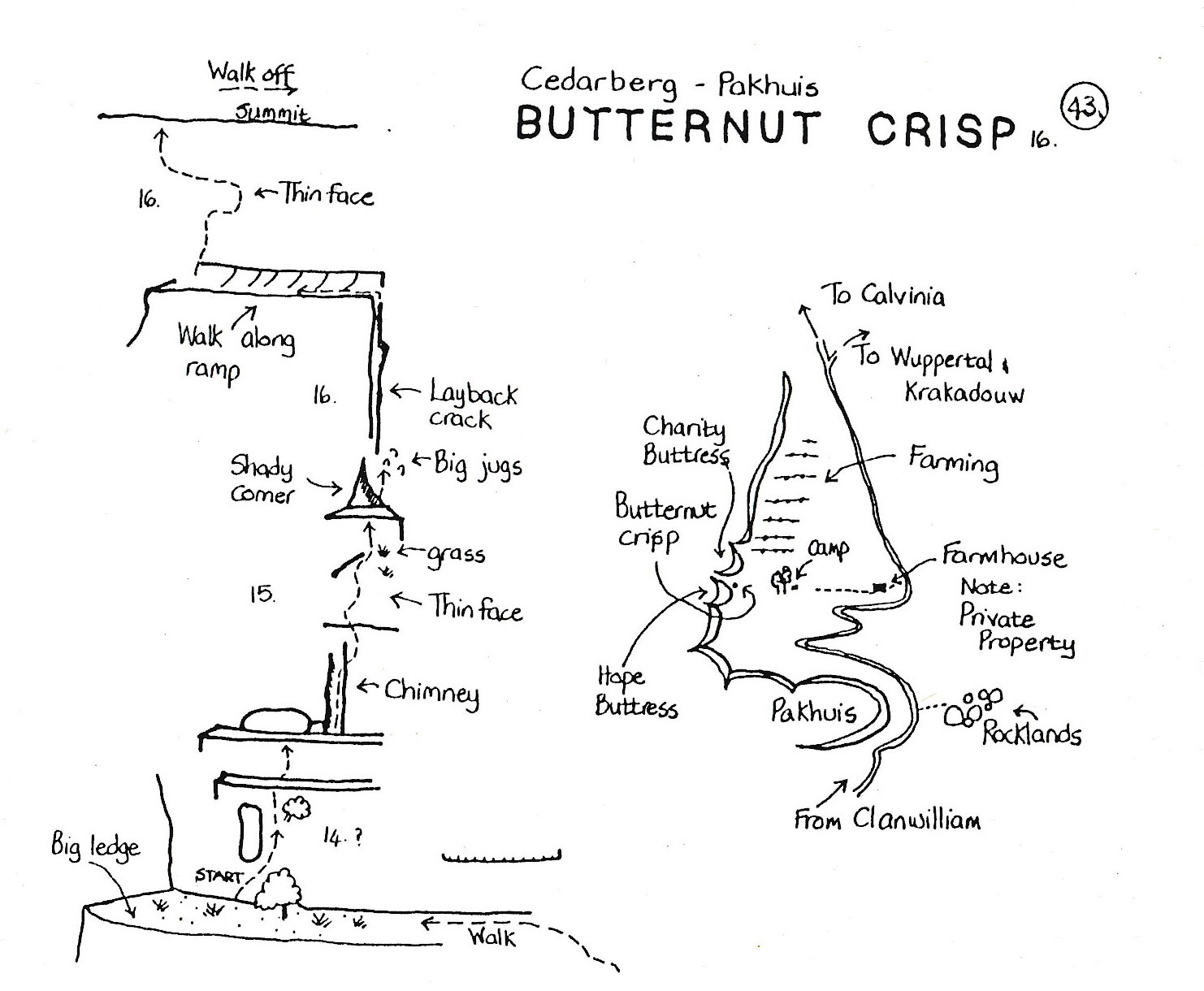 While whizzing up Butterfinger we were captivated by what we were seeing around us on the wall.  It’s very similar to Wolfberg and Tafelberg.  The rock is brick-hard orange and grey sandstone and has broad expanses of featureless rock that is impossible to climb; and there are prominent arêtes and crack systems.  We went prepared with the Andy de Klerk/Jeremy Colenso route book Western Cape Rock (more generally known as the ‘Book of Lies’) and were able to figure out many of the established routes.  We were also able to figure out that the bold, modern line to the right of Butterfinger Crisp was unclimbed!  This proud line is very easy on the eye as it’s a clean, steep and soaring arête at the top.

Directly after climbing the Butter-thing we set to work on the bold arête.  After some dangling around on the fearsome arête we headed down to figure out the rest of the line.  We found that at the start of the wall to the right of the Buttery-route there is a 100m cave-like overhang system.  On returning the next day we found a way through the big roof and over the gently overhanging wall above to reach a beautiful blunt arête which would be the third pitch.  The rock is a beautiful shade of orange except for a thin metre-wide strip of white rock which would be our third pitch.  Unfortunately for us the heavens opened and we retreated in the rain.  We scampered back to Rebecca’s restaurant for a cappuccino.  Two years would pass until our return.

Driving down the Pakhuis Pass we were pretty amped looking across at that big steep wall.  We passed that big farmstead at the base of the pass and then took the first little track to the right.  Within metres we hooked a left and after 50m came to Bernard’s hidden house in the blue gum forest where we asked him for permission to traverse his land again.  Back on the tar road we headed direction Calvinia for two or three kilometres to reach the cottages on the left.  Here we hooked a hard left to head back on the sandy track parallel to the road we had come on.  After winding our way through the newly planted fields of rooibos we were back at the base of Hope Buttress.  An hour gets one to the start of the climb in the left-hand end of the long overhang. 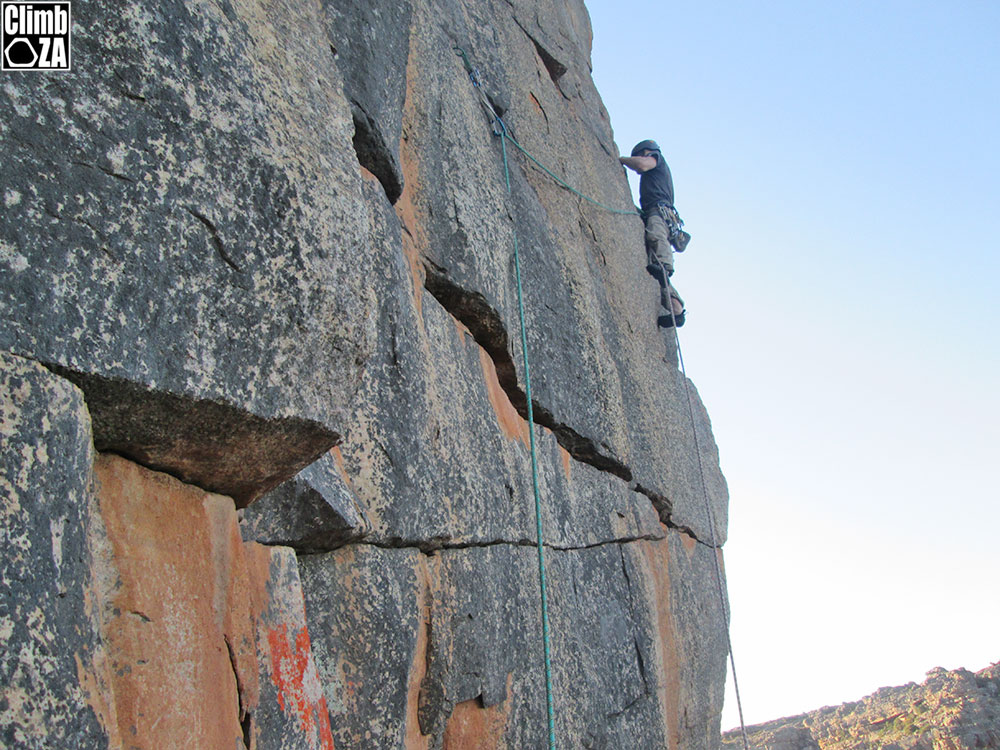 Guy leading out on Wild At Heart. Photo Hilton Davies

The first pitch is interesting and the second pitch is okay, but the stuff gets going with the third pitch.  The rock is pretty and glassy and the moves get tougher and tougher.  No wonder I failed on the onsight in the rain two years previously.  It’s proper-tough at solid 25 and the gear is thin and hard to place.  But it’s the fourth pitch, the soaring arête pitch that is the raison d’etre, the jewel in the crown, the main event.  It’s big, hard and scary.  In 40m there’s hardly a move at less than 21 and a long stretch in the middle is sustained 25 with no gear.  It needed a special lead by a special climber.  Guy was the man of the moment.

In sublime form Guy calmly set off up and right on the clean grey face that forms the arête to its right.  After about 20m he placed his fourth piece of gear before the gearless crux which goes on for about 7m.  He quietly and methodically moved through the toughest section and seemed in no great rush to place a piece after it.  Another 20m of sustained climbing with just two pieces of gear landed him on the flat summit of Hope Buttress.  I followed with one fall.  I said ‘well done’.  We said ‘yay’.  We went down the mountain. 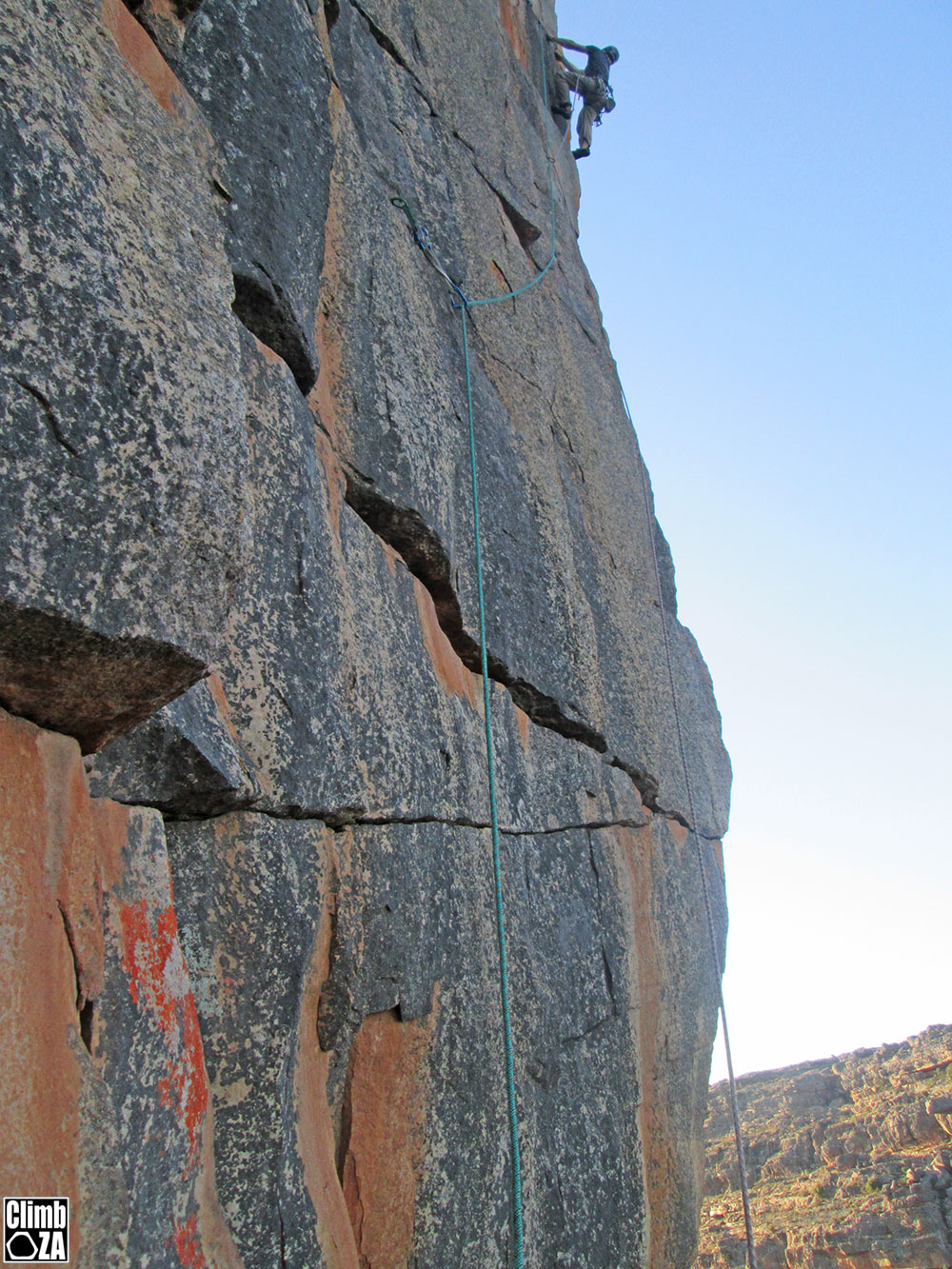 Guy leading out on Wild At Heart. Photo Hilton Davies

Postscript:  The winter of ’14 has been tough for me and there has been little climbing while I’ve watched my dear old dad struggle to the end of his life.  Guy has done the heavy-lifting while I’ve been there in need of the therapy.  My dad has gone and I have realised that a good climber and a good friend is a good thing.

Start:  Hope Buttress has two big grey open books in the top half. We are interested in the right hand one.  From the clump of pines walk up the left side of the valley between Hope and Charity Buttresses.  Avoid the first broken band of rock and on the ledge above it head out left to the very long overhang.  The route starts about 8m before the left-hand end of the overhang at a cairn.

Pitch 1 15m 21:  Get off the ground at the big white dot on the rock. Meander up and left to stance at the lip of the overhang on the left at the cascade of creepers;

Pitch 2 20m 20:  Go through the right-hand break in the overlaps above.  Continue up to the big ledge system at the base of the beautiful, blunt orange arête with the yellow-white streak;

Pitch 3 25m 25:  Start up the yellow-white streak on orange rock up to the roofs.  Continue up directly on grey rock through the overlaps and then up the grey arête to a ledge.

Pitch 4 40m 25:  Start at the back of the ledge then head out rightwards to gain the arête proper.  Continue up the arête to the top (world-class).

(From right to left)

(From right to left)

8 Responses to Wild at Heart