This was a hard and committing lead, ground up and onsight.  Together they would repeat their route over the years, most recently on its 25th anniversary in 2003 prior to Davids passing in 2010.
Time takes its toll on all of us and Robin wanted a last burn on their old route before he would not be able to pull it off and so he contacted Dave’s brother Hilton and plans were made……

Robin Barley was born in 1945 at the end of World War II.  The son a Yorkshire rope maker he grew up in Harrowgate where he would spend his time scrambling on the Gritstone in the Dales, soloing up to grade 17 whereupon his father decided he needed a rope before he killed himself.  He was presented with his first Hawser laid hemp rope and at the age of 15 in 1960, starting a long career on the sharp end.

Robin completed his studies at Manchester University whereupon he would be let loose on various hospitals around the world as an anesthetist.
His first spell in South Africa would be together with his brother Tony in 1968 – 1969 where he worked at Baragwanath.

Together they would venture into the Magaliesberg , putting up: 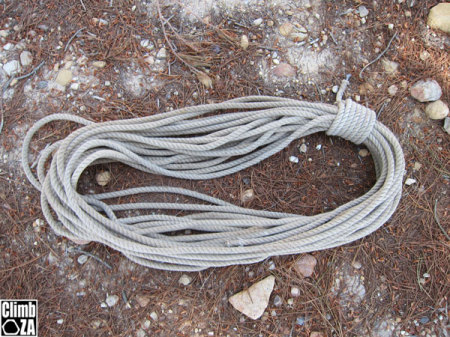 During their stay in the 60’s they would visit the Ledge on Table Mountain along with Don Hartley and Roulette was born (originally Russian Roulette). Robin would also open Oddshouters Outing, Apollo (on Castle Rock) and Tony together with Don would unlock Last Laugh. 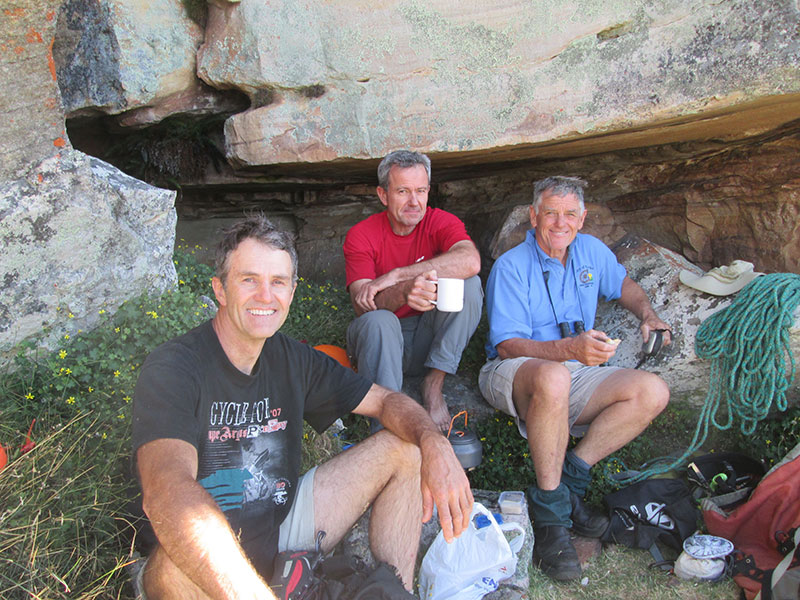 1978 Saw the return of Robin to do a tour at Red Cross Children’s and at Groote Schuur hospitals.  He would stay on until later in 1979 and during September 1978 he would team up with a very young and talented climber, Dave Davies.

Andre Schoon and Pete Du Preez had had Wolfberg to themselves for a while when Dave and Robin arrived, when they gave Day of the Jackals its name in response to the arrival of the new challengers.

And so the scramble to pick off the best lines began and Celestial Journey was born.
The route follows numerous difficult features, winding through blank grey faces.  A hard and committing lead and desperate for the gear of the time, it was done ground up and onsight!
Adjacent to Celestial Journey they would open Alone in Space and Robin would send Energy Crisis (aptly named for the petrol restrictions in force at the time) as well as Satisfaction Guaranteed, amongst numerous others.  All superb lines! 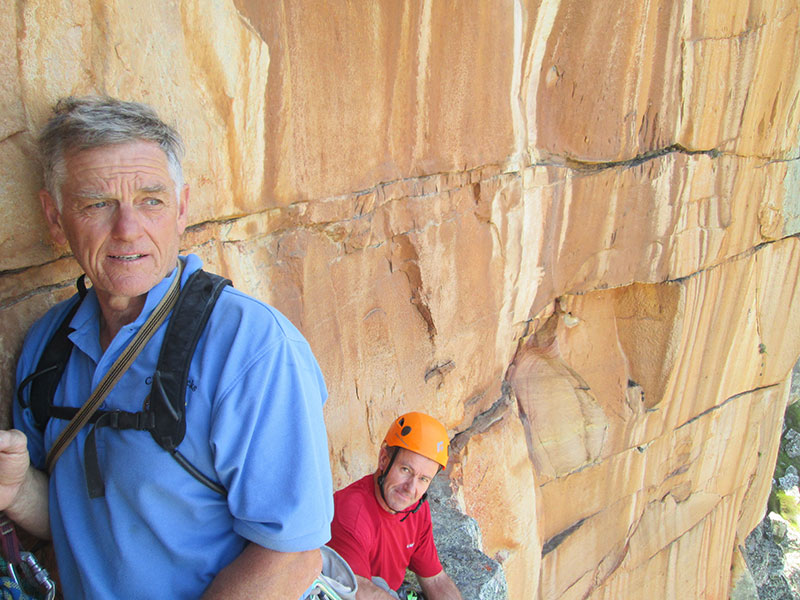 Robin and Karl on ledge of Pitch 2, Celestial Journey.

Although he has summited Ama Dablam in the Himalaya, he is primarily a rock climber.  He has resided in Squamish, British Columbia for some years, where he built a house and lives with his wife Judy under the Squamish Chief, a 2000ft rock face where he has opened many routes.  He has also put up around 300 routes in the Skaha Valley in BC, many more in his native UK, as well as in Australia and SA.
A prolific traveller, he spends many months of the year between his home in Canada and climbing trips around the world or visiting his daughter in OZ.  He still has close contact with old friends here, amongst them Ron Duff, Mike Scott, Tony Dick, Chris Lomax, Paul Fatti and Hilton Davies.

On meeting Robin in the campsite for the first time I was greeted by a somewhat grumpy man in his rental Combi camper van, looking at all the people crowded into the space between the trees.  Before long he had unwound and was nursing a beer and chatting about old times and faces with Hilton and the plan to lay siege to the mountain.
Somewhat non conformist he did express his horror at the permit systems for climbing creeping into place in Wilderness areas like the Cederberg and was mortified to see the large numbers of people (relative to 20-30 years ago ) in the Sanddrif campsite on the weekend.

Sunday the 23rd of November dawned, a perfect cooler day for the Cederberg.  The game was on and we headed up the slope at 7 a.m. to beat the sun and wait out its transit behind the Wolfberg to allow us an opportunity to sneak up on the route.
Much tea was drunk and stories swopped and Robin launched himself at the first pitch with Hilton belaying from above the pea pod pitch on a comfortable ledge.

Suffice to say the Yorkshireman had some choice words for the pea pod, not all flattering.  I hoped that the mountain was not listening and would overlook these transgressors!
Whilst on the ledge above the pea pod a voice from below from a hiker asking us how we were enjoying the route.  Turns out its is Gosia Lipinska‘s father, Marek, himself a climber many years prior.
He would engage us later that evening in the campsite and in discussion reveal that Robin had climbed with some of his buddies in Poland!  Seems this guy has been around a bit ….

The rest of the day was spent waging battle with the line which was not expected to go easily, but is always much harder than one imagines.  Still not every day that one gets to climb with one of the original ascentionists and witness a man of his years do battle with a route that will spit off most hard young guns. 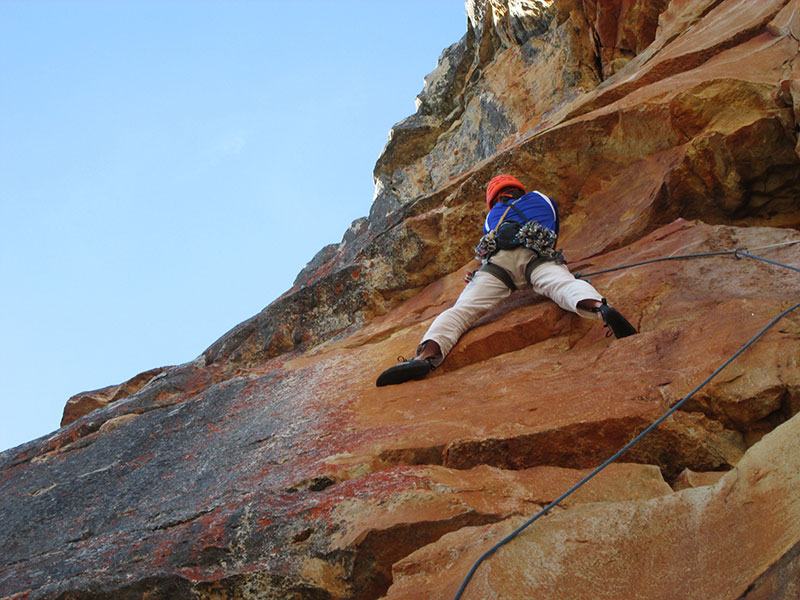 Hilton and I both agreed that neither of us will be up to something like this when we get to his age!
Topping out after the last sublime pitch at 6 that evening we took the long stroll back to camp and to crack a beer and shoot the breeze before Hilton and I had to say our goodbyes and head off for Hout Bay whilst Robin and Judy would remain in the Cederberg for another week or so before continuing their tour around the country.  Some climbing, some safari down to Addo and on to Mount Everest in the Free State and to hook up with old friends.

On a tight schedule, they are to return to Cape Town for one day in December prior to their return home.  Something was said about doing Roulette again….    😉  now just for Hilton to get a few of the original party together…

13 Responses to Celestial Journey, 36 years on!!