The event saw some of the best climbers in the country congregate in the climbing hall, to compete for the coveted Rock Master Trophy.  The routes, admirably set by the team of Matt Bush and Nicholas Telford, gave the contestants a real run for their money with a mixture of technical, thought provoking moves to steep, pumpy pulls and exciting dyno’s.

Spectators were entertained with powerful climbing, determination, grit and some flawless sequences as they cheered the athletes on, as they got higher and higher up the wall, edging slowly to those somewhat elusive anchors.

The tension was palpable as climbers broke through crux sequences, to wild applause, which had stumped previous contestants, and managed to get a few moves higher before winging off in often spectacular fashion.

All climbers climbed two routes, both onsight.  The scores of both routes were then added together to determine the final results. 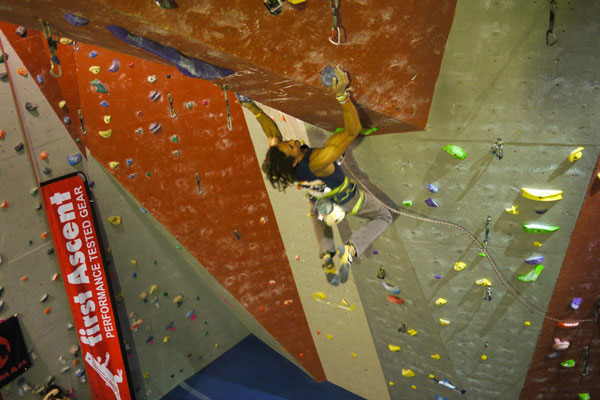 The women put on a gutsy performance, with Mikela Sinovich, the youngest ever Rock Master contestant, putting in an impressive first round performance, but falling low down on the second route, leaving the competition fairly evenly placed for the other 3 contestants, with Illona Pelser from KZN eventually coming away as the clear winner with a stellar performance on the last route, closely followed by Sam Stainton from Gauteng in 2nd place and Julia Chen (Western Cape) in 3rd spot.

The men’s group saw quite a few first time contestants to Rock Master and of course many regulars, but it was first timer Falco Filotto from Gauteng, who clinched gold with a solid performance on the first route and an impressive and powerful execution on the final route, sticking the “go for it” dyno, which few managed to do.

Even though, the top three men were separated by only 2 points apiece, with Calrin Curtis from Gauteng taking Silver and Western Cape’s Jamie Smith, taking Bronze.

The spectators Dyno comp, was also a huge success, with spectators trying 4 totally different Dyno’s, with the ultimate one been a jump start/intermediate hold to jug dyno, which was impressively nabbed first try by Rowan.

All in all it was another great Rock Master event and lots of thanks to all the contestants – some who made a great effort to be there, travelling from Gauteng and KZN. 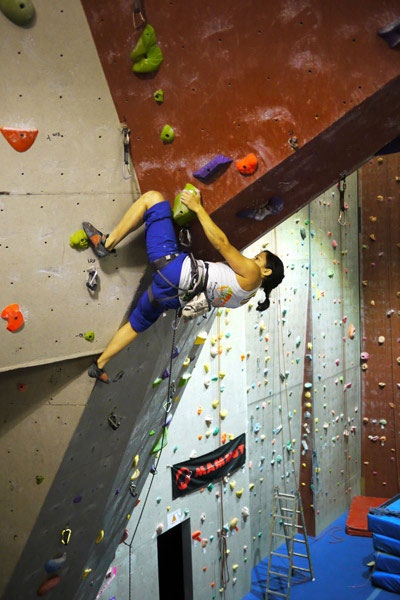 Also many thanks to CityROCK for the venue and all the staff who were a great help with everything – route stripping, front counter drink sales, generator applications (yes, we had two power outages during the comp) and just basically been there to make the comp run smoothly.

To Matt Bush and Nick Telford, for setting 4 very different and awesome routes, the belayers (Warren Gans and Cuan Lohrentz), scorers (Sean Langeveldt and Teresa Leal), general technical assistant (Tyrone Chang), Dave Nel (the MC), Jono Joseph (for taking the video), Joao Gaspar and Willie Koen for the still pics and to Jeff Ayelif for rocking up with his new GoPro and taking extra footage, to San Amar and Shanon Law for co-ordinating the Dyno Comp. Also to The Three Cooks for providing us with such amazing food.

A huge thanks also to the sponsors, without whom there would be no competition: Black Diamond, Boreal, First Ascent, Petzl, 5.10, Mountain Hardwear, Prana, Mountain Mail Order, Evolve, Sport Unplugged, Buff, the MCSA, Red Earth, Darling wine cellars, SA Mountain Magazine and ClimbZA.  Thanks for supporting the event.

Hope to see you all next year at South Africa’s Rock Master, where the country’s best climbers compete for the prestigious Rock Master crown.

Thanks for coming
Tony