You are here: Home › The Exclusive Everything – A Private Universe
Posted by Richard Halsey on Feb 23, 2015
9 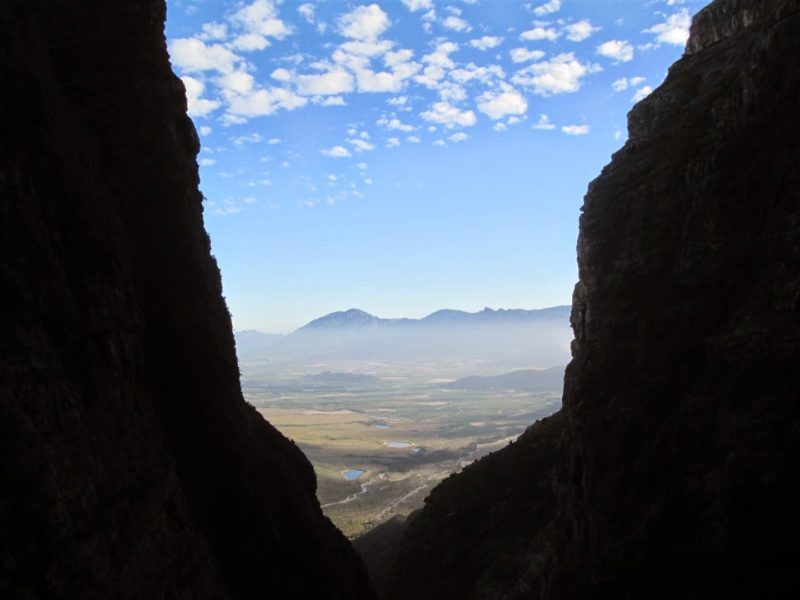 Pubs are awesome. They serve cold beer, hot food and are places of stories from start to finish.  This tale originated in Forries and ended at Bardellis.  While the later is generally considered a restaurant, it is a building wherein the public can get their hydroxyl fix, so it certainly fulfills the chief requirements of a pub.

Let’s start at the beginning.  The very beginning.  Grey beards with many letters behind their names suggest that everything started with a big bang.  Given the utterly incomprehensible size of the result, this seems to be selling the genesis event a tad short. Surely MMEFBE would be better? Most Monumentally Enormous Fūcking Bang Ever.  Letting one rip after a few too many beans could be ‘big’.  What Guy Falwkes planned was ‘huge’.  Hiroshima was decidedly ‘gargantuan’…  You see where this is going?

Alternatively we can dispense with adjectives, since it was an explosion so totally out of our cognitive grasp.  All others are but degrees of microscopic imitation.

If ear plugs had been invented you would have wanted them, for sure.

Anyway, for a ridiculously long time after the MMFEBE, atoms ass’ed about slowly forming themselves into planets with stones and gravity, which are a prerequisites for good rock climbing. Throw in another few billion years of erosion and you end up with places like Slanghoek Amphitheatre.  A grand place to live a story.  Evolution came to the party and though millions of changing, breathing critters, left three humans named Hilton, David and Matthew to establish a route called A Private Universe (22 A1). 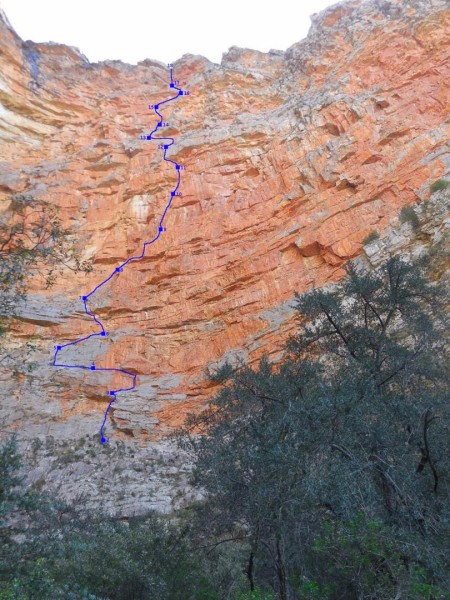 The route followed by A Private Universe. Topo: Douw Steyn

This was our objective.  Well, actually our objective was to have a darn good time, and this was the conduit.  I met Uwe and Douw at Forries to plot.  Fortuitously, Warren and Gosia joined for dinner and quickly our posse had grown to five.  A week later, in scenes mirroring those in Little Miss Sunshine, we repeatedly push-started the aged Cortina and eventually got to the trees where our wheeled stallions would wait for us. 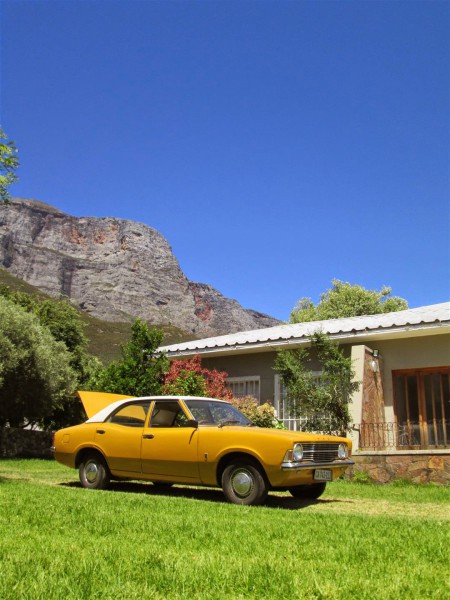 Now, had our quintet consulted the ‘approach’ section in the re-written topo by Jonathan Hajos, they would have known to stay in the river. As in pretty much swim upstream. Enter the K-Index.  Ice skating is a zero.  Solid Hakea thicket is five.  Our heroes found themselves negotiating K3/3+ bush on the slopes above the stream, and eventually, needing some feeding, they ducked into the river bed and realised what they had been missing.  Spirits lifted, they forged on to the base of the wall. All 550m of it.  Like the Mexican, MSG covered maize munchies, it is Beeg….very Beeg! Similarly, like a large packet of chips, they would tackle it one bite at a time. 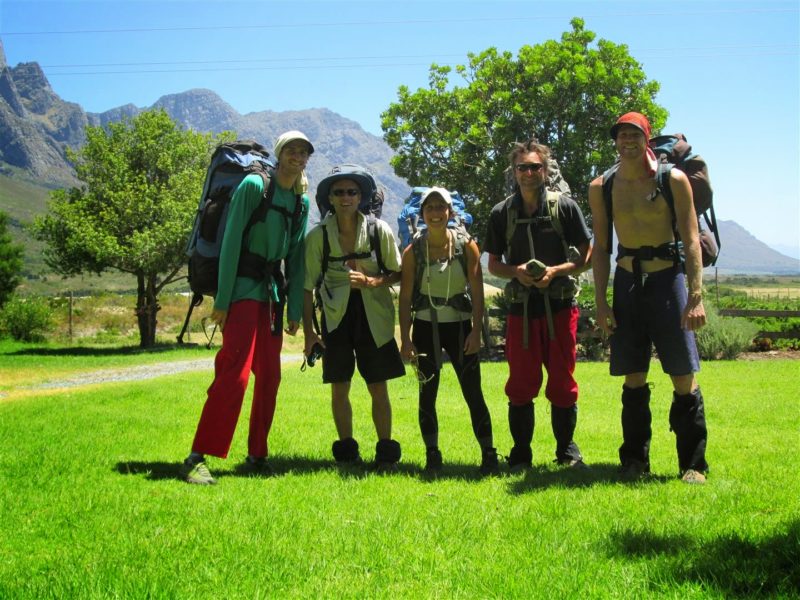 The duo planned to go up and down in one shot. Warren, Uwe and I opted for a night on a cosy ledge at about the 300m mark. The first few rope lengths of climbing are nothing to write home (or anywhere) about, but they do get you to where things improve dramatically. It’s steep, airy, and the trees below keep shrinking. This is why we do these things: to get high. Without an MPR (magical piggy re-locator), we got to revel in some hauling. We only had the ‘essentials’, so it was not an overly technical task with this weight. However, a frustrating truth of this post-MMFEBE existence is that no matter what, whether you have done your 10 000 hrs or if your name is Tommy Caldwell; at some point your pig* will get stuck, and you will be the one squealing. Fortunately, our two little porcines got the misbehaving done on pitch 2, and then elevated elegantly all the way to their last stop. We binged on our pre-cooked dinner, downed copious amounts of sweet liquid and slept hard under a half sky. 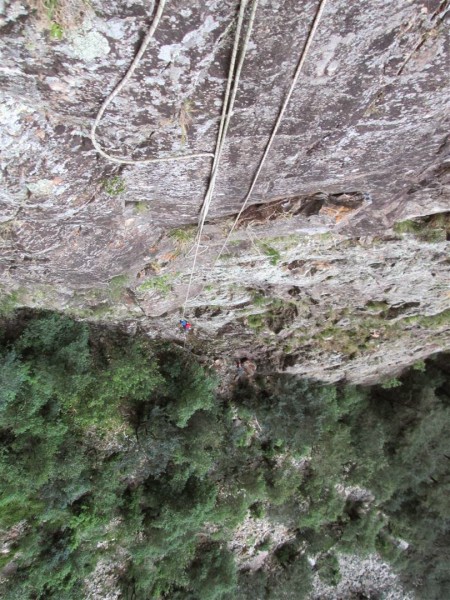 Pigs pretending not to get wedged. 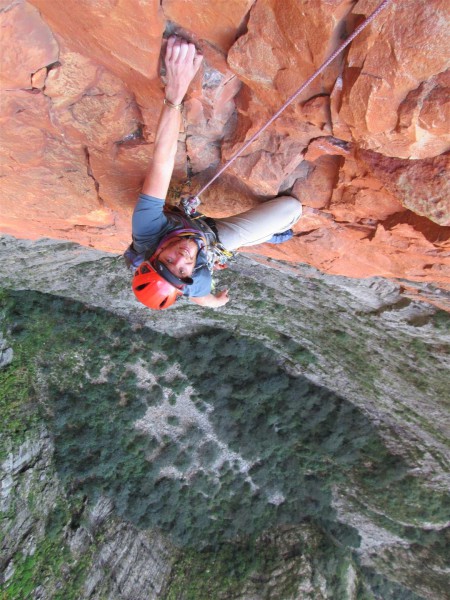 Why we do these things..

Dawn brought stretching, appreciation of a beautiful awakening space, and some precarious off-loading. We didn’t need to tie in, as we had done that the previous morning. Minor consolation given the harness imprints on our hips. Cruising to the top pig-less was most welcome, but maybe less exciting than cruising to the pig top-less, whatever that means. Below the final stem-fest, I will admit to sending numerous rocks on a flight to the bottom. How often do you have a 500m drop to toss off? My research made the grounding breaking (literally) discovery that the bigger they are, the louder they fall. 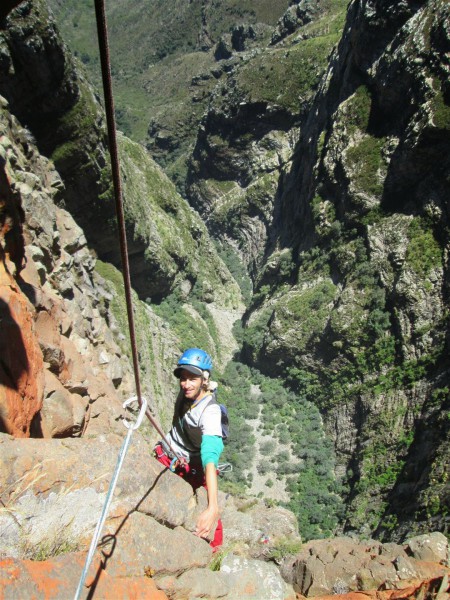 Just after having a good toss.

Now, some poor bastards have done this route, hauled all their baggage right to the top and then walked 15km to Bainskloof. Where one would have to arrange a lift, probably by moonlight. No offense to those concerned, but this sounds Kak! Maybe around K4. We opted to abseil, which probably scored K1 for ease, but still took about 5 hours since it is frikken steep. After passing our sleeping ledge, we also had pigs between our legs, which was not compatible with epic speed. We didn’t want to scare them. 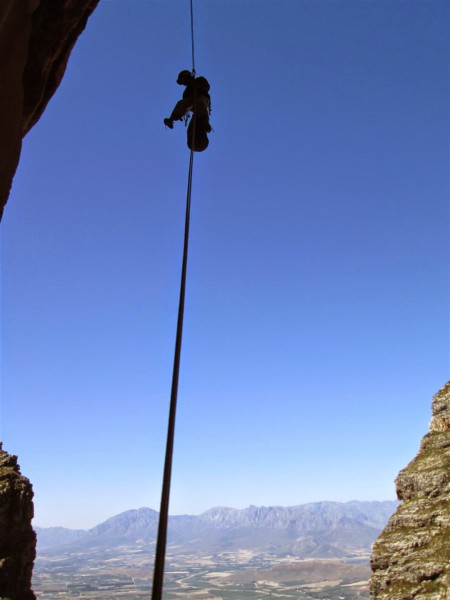 Warren taking his pig for a ride.

Terra firma bought the fastest harness removal this side of a climbing strip joint, quickly followed by more unashamed binging. The still under the trees, the height above us more familiar, muscles worked and our place in the cosmos very calm. These are the adventures we live through. They contain the snippets recanted at Bardellis, with grins and giggles. On a galactic scale, our lives may be vanishingly small and of undetectable consequence, but to us they are everything.

We each have a private universe, and its up to us how many bright, shining memories are packed into it.

* If you don’t know that a pig revers to a haul bag, then you may be reading the wrong blog. 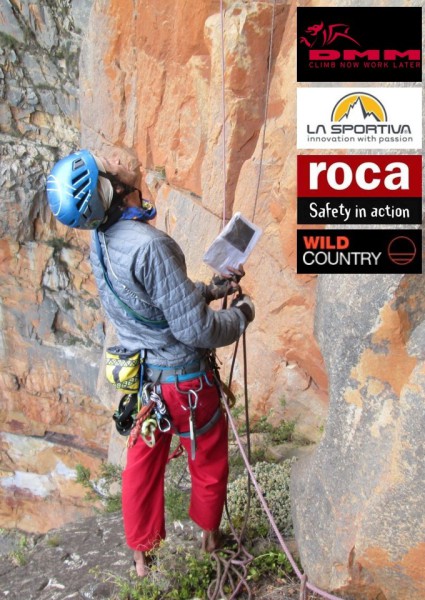 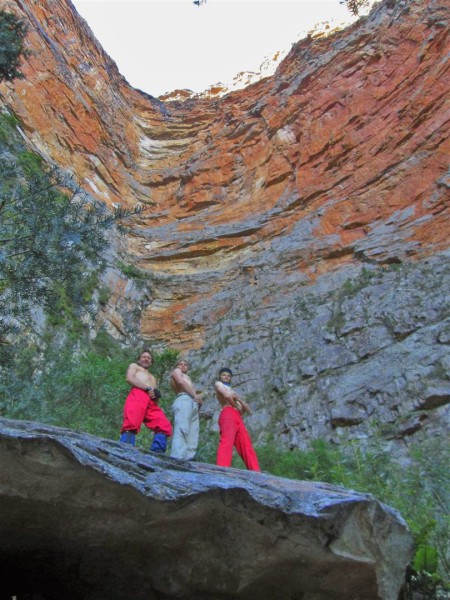 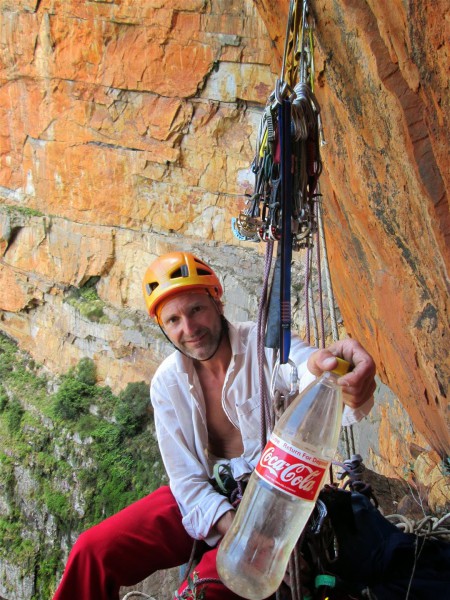 Scientific observation: our one pig was 95% water and 5% plastic. The other has mainly feathers. Wierd critters indeed. 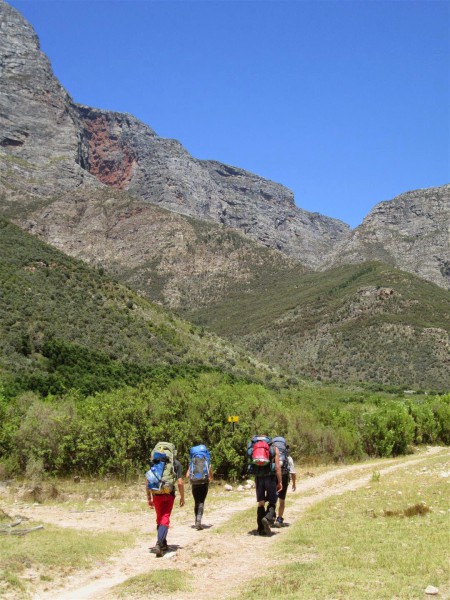 K1 path. The K3+ fynbos around the corner waiting to ambush us. 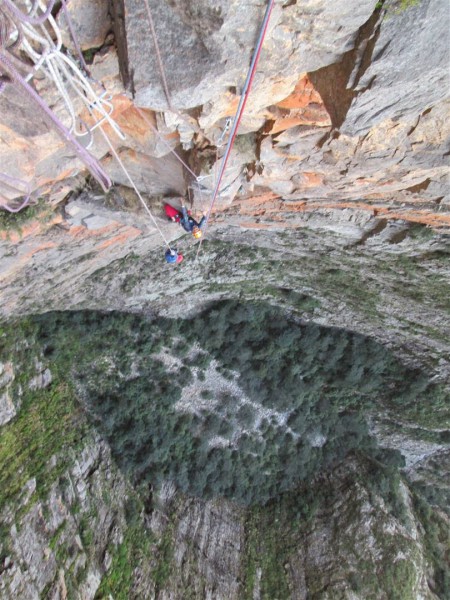 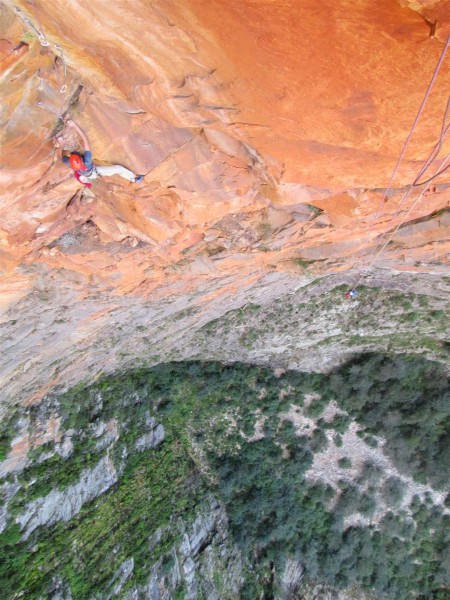 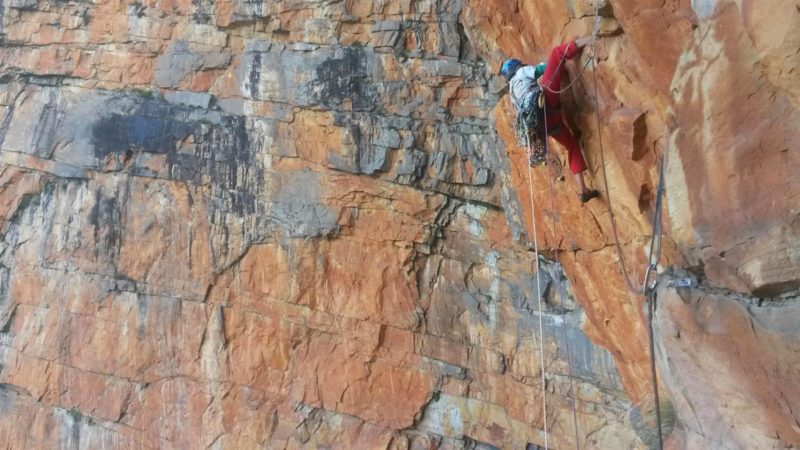 9 Responses to The Exclusive Everything – A Private Universe