You are here: Home › Banff Mountain Film Festival 2015 is back in October with films of adventures
Posted by Justin Lawson on Jul 29, 2015
1

11 award-winning and audience-nominated Banff Mountain Film Festival World Tour films, selected from hundreds of submissions, will be shown at each screening in South Africa. They include a mix of topics and styles that are entertaining, inspiring and thought-provoking. These films range in duration from the intense-action, two-minute kayaking video ‘Into the Ditch’ to the 37-minute documentary film ‘And then we swam’, winner of the Best Exploration & Adventure Film category.

Regular audiences will delight in seeing some of their favourite adventurers in action. Danny MacAskill is up to his mountain biking feats again in ‘Danny MacAskill – The Ridge’, Rush Sturges kayaks in an urban environment in ‘Into the Ditch’ and Alex Honnold climbs desert towers in ‘Sufferfest 2’. 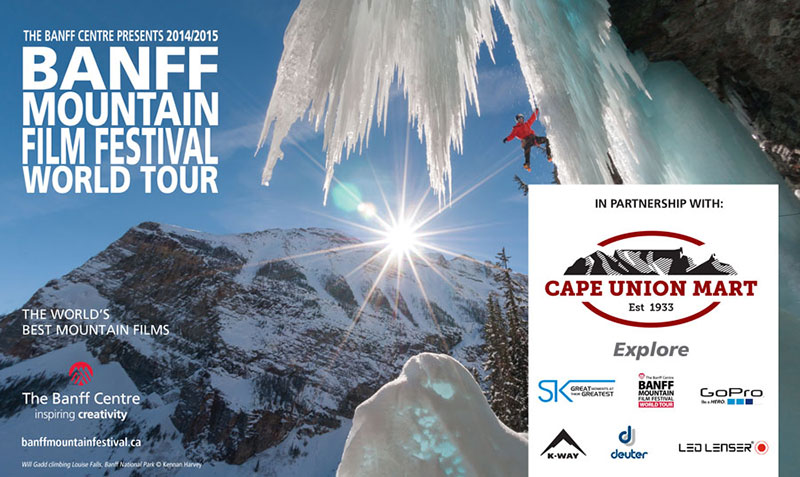 Shows start at 20h00 and all 11 films are shown at each screening.

Tickets are available from 9 September 2015 and they can be purchased directly through Ster-Kinekor. Book online at www.sterkinekor.com or call Ster-Kinekor Ticketline on 082 16789. Ticket prices are the same as a standard Ster-Kinekor ticket.

Details and information at www.banff.co.za.

Danny MacAskill – The Ridge / Mountain Biking
World-renowned trials rider Danny MacAskill is back! Filmed on the stunning Isle of Skye in Scotland, MacAskill returns to his childhood haunt for a new challenge: riding a mountain bike on the infamous Cuillin Ridge.

The Unrideables / Paragliding
This film is glorious cinematographic eye candy. Expert speed flyers test their limits in a massive, volatile landscape of ice and snow.

Wild Women / Slacklining
Smile and laugh along with slack-liner Faith Dickey as she shows us just how fun life on the line can be.

Afterglow / Skiing
From Alaskan spines to deep pillows in British Columbia, Afterglow turns big mountain skiing on its end, and then turns it upside down again, heading into the night through a wintery glow of trippy technicolour.

And Then We Swam / Rowing & Swimming
Most adventurers who set out to cross the Indian Ocean have some rowing experience. For two blokes from the UK, that seemed like a minor detail, not a death wish.

Touch / Paragliding
Touch is a colourful and spectacular flying tour of Santorini in Greece, the Aiguille du Midi above Chamonix and the Col du Galibier in France, with a bit of cheekiness added in, just for fun.

All My Own Stunts / Mountain Biking
Rob Jarman is a downhill mountain bike specialist and a professional stuntman. Following a near-fatal accident, he has battled to stay atop both fields. It’s an emotional and gripping story about how hard it is to let go.

Arctic Swell – Surfing the Ends of the Earth / Surfing
Surfing photographer Chris Burkard loves capturing cold water surfers. He’s prepared to venture to the ends of the earth to snap that once in a lifetime shot.

Into the Ditch / Kayaking
2 friends, 1 ditch. Nothing has changed, but now everything is different. Watch as friends Ben Marr and Rush Sturges tackle breakneck speeds down a 500ft tall drainage ditch.

Sufferfest 2 / Climbing
Cedar Wright and Alex Honnold are back! This time, a month riding their bikes and climbing desert towers in the American Southwest should be a piece of cake for these fast friends. Or will it?

Sun Dog / Skiing
What could be better than riding gorgeous lines of untouched snow with your best friend at your side?

Preview clips of these movies on the Banff Mountain Film Festival website:  http://www.banffcentre.ca/mountainfestival/worldtour/films/