After a year of my Flashed Quickdraws hanging, the moment finally arrived today.  Bolted by Andrew Pedley, the Manometer Project was born.  Having bolted the opposite of his regular style, Andrew allowed me the opportunity to attempt a route that was truly my style.  3 Bolts inclined start, 8 bolts horizontal roof climbing and then a 40 degree lead out to the chains.  What more could I ask for???

Months passed, the struggle was real.  I managed to do all the moves on the route after a few goes at it, but struggled on the moves establishing in the roof and the last move on the lead out to the chains.  Soon it was just the move at the start of the roof.  The crux.  Mentally, physically, every possible way, it beat me.
The beta evolved consistently. “With this new beta, I’ll definitely send next time”, was uttered a few times too many, many many many months ago.

At some point, when you work a difficult route so hard, you start becoming weaker.  It goes to your head.  Plays with your emotions. Soon you struggling to climb 22s/6c at Bronkies and you wonder where the f you fell off the train. And then…. Injury.  A few months ago, I went one on one with a bottle of my mom’s famous Tomatosusie, a tomato/onions/chilly chutney Alex Bester can finish a whole bottle of on a drive down to Oudtshoorn (breakfast/brunch/lunch/slunch/supper).  Sneering pain in my elbow, amplified by excessive training.  With dips/push-ups i managed to start the healing process, but at some point in the campusing frenzy, antagonistic training was left at the door and pain came back swiftly.  It was at this point that people started giving me flack for doing direct starts.  Mentally, physically and spiritually one starts breaking down when you are defeated by what you love.  A fight to figure out why one puts oneself through the daily masochism/public scrutiny ensues.
Whyyyyyyy????? ‪#‎criticisethisbitches‬

You find yourself climbing easier grades. Climbing all of them. Climbing trees. Climbing buildings ‪#‎TuksDoenNiks‬.  Crimping tables, chairs, pillars, bricks, windows, pencils, desks, tiles, even knife blades in restaurants to the extent that your mom gives you that look 0.o and you know you need to find something else for your fingers to crimp.  Psych builds up.  Strength returns.  Fun is found in the simplest of climbing activities.

Whyyyyyyyy? Climbing is a lifestyle. It is a choice you make at a point and there is no return. Even when your mind drifts, your body remains a climber. Once a climber, always a climber, the real world is just too boring to be anything else.
After doing most of Bronkies in the past few weeks, some of Chosspile and just keeping myself busy, peace was made with winter. Perfect conditions. Grips were now holding onto me??? Cold frictions is amazing.

Yesterday, I unknowingly didn’t take my usual 9.8mm Mammut Tusk project rope to the crag, instead I had taken along my awesome 9.5 Mammut Infinity.  I could feel the weight difference.

I stuck the crux move for the first time from the lower rest.  The joy as my scream echoed over the toxic Hartebeespoort waters was in-explainable.  In the linkup, I managed to get an awesome new toe-hook with my trusted holy Five Ten Teams (forgot my new Dragons in Nish Singh’s car, but need the rubber on the toes more than under them;), so my Dragons, in Botswana, has a well deserved holiday :p).

“With this new beta, I’ll definitely send next time”.  I didn’t.  The sun went down with loads of psych roaring as Booye Rousseau (the best Manometer Project belayer in the world) and I once again left Chosspile. 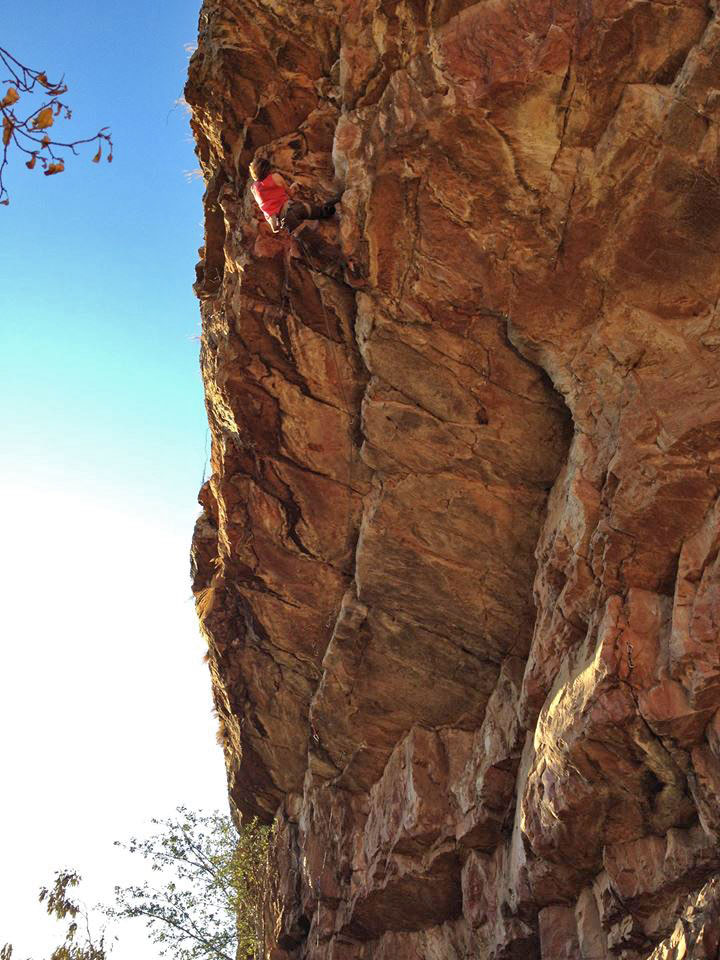 Ebert Nel shaking his booty on Megalomaniac at the Chosspile. Photo by Madie Kern.

I had R20 to my name (R0 in the bank) at this point in time…
All I wanted to do is wake up and come back.  My crazy psych was nearly killed by a bunch of maybes for Chosspile Sunday.  After having canceled Chosspile Sunday, Michelle Van Aswegen had convinced me that we were going.  Nish’s “Shut up and send” messages each time I quit also helped.

Albert Pienaar, Michelle Van Aswegen and I left Pretoria around 10am.  Albert’s first day on rock started with the classic Salazar and the variation of Slitheren.  He was owning it.  Michelle was fighting the after Rocklands lack of endurance with her crazy strength.  The Exploratio crew were also providing psych creating the perfect setting.

It was time.  With a scurry under the Man Cave.  Psych made the base feel alive.  Michelle Van Aswegen stepped in as a first time belayer on the project.  Everything felt right.  I pulled the crux.  I was on a send finally.  I celebrated, not because I was sending, but because I had finally crushed my mental barrier.  I fell soon after.  Flash pump….

A coffee later, Brian Michael Weaver and Evan Margetts rocked up with my forgotten Anasazi and extra bags full of psych.  Flawless movements up to the crux, like I had been climbing it for a year.  I pulled the crux.  I don’t recall celebrating, because the beta was changing again….  I slipped a few times.  This wasn’t going as perfectly as I envisioned minutes earlier.  FML, what was I doing.  Sending?  I got to the kneebar rest before the lead out.  I had done this many times, but it was always super stressful and remained tricky even when rested.  I tend to give up at the chains, and try again.  Not today.  I had thoughts of not pulling the chains, but all was soon forgotten as psych rose from the base below.  I was blowing minds:)  My mind was being blown.

I celebrated once more with screams of joy while fumbling the clipping of the chains.  It was done. Finally I had finished my year long project.

The Megalomaniac was born.  Coming in at 34/8c, I personally think its harder, but have nothing to compare it against, so a lower solid grade is given.

Whats next they ask?  Well I’ve already bolted the extension.  Double the length…. What more can I say….

I have R0 to my name for the rest of the July month, thanks Michelle and Albert for covering entry and toll, guess I’ve been climbing “too much”.

Thanks to my sponsors.  Mom&Dad, I appreciate everything you do for me.  My trusted gear sponsors Five Ten, Mammut, ‪#‎Flashed‬ and ‪#‎CityRockJhb‬, Mountain Mail Order.  The combination of your gear support allows me to push the envelope of South African climbing.  The goal to be the first South African climber to send 36 is still on.  Its been bolted, now let the extension projecting begin.

A special thanks to Andrew Pedley for bolting this amazing line. You are truly a master worth learning from. Thanks for all the support and psych!!!!

Thanks to all the many folk that were involved in the making of this send. I appreciate you all!!!!

Ps: forgot my holy 5.10 teams at the base of the climb.  If you do pick them up please return them, if not, Ill be back for them 😀 ‪#‎stoner‬ 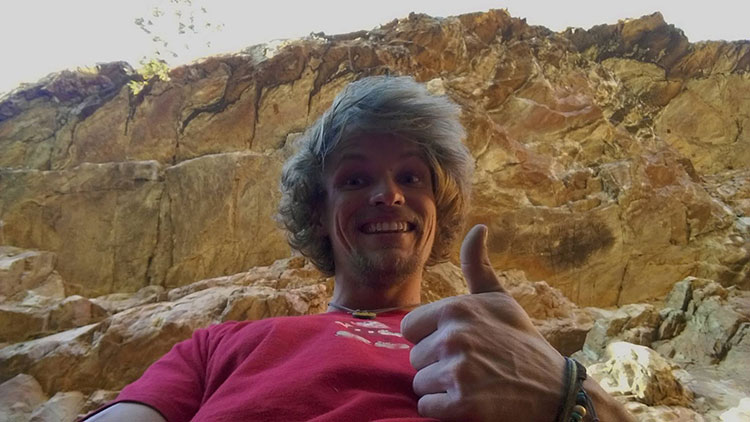 Brian Weaver Back In The Game
The Megalomaniac