Seen as Ebert is playing all coy, I decided to write a few words to praise his recent first ascent of a new (34) 8c.  Ebert Nel from Pretoria opened Megalomaniac at the Man Cave on Sunday 26th July (2015).

The line is horizontal for 2/3rd of it length, taking an incipient flake through a roof via a very hard boulder section then an athletic race to chains way out and up.  I bolted the line a couple years back but sacked it off as being too hard.  Its certainly 8c.  This is the second 8c ‘up north’ along with Shear Force at Boven. 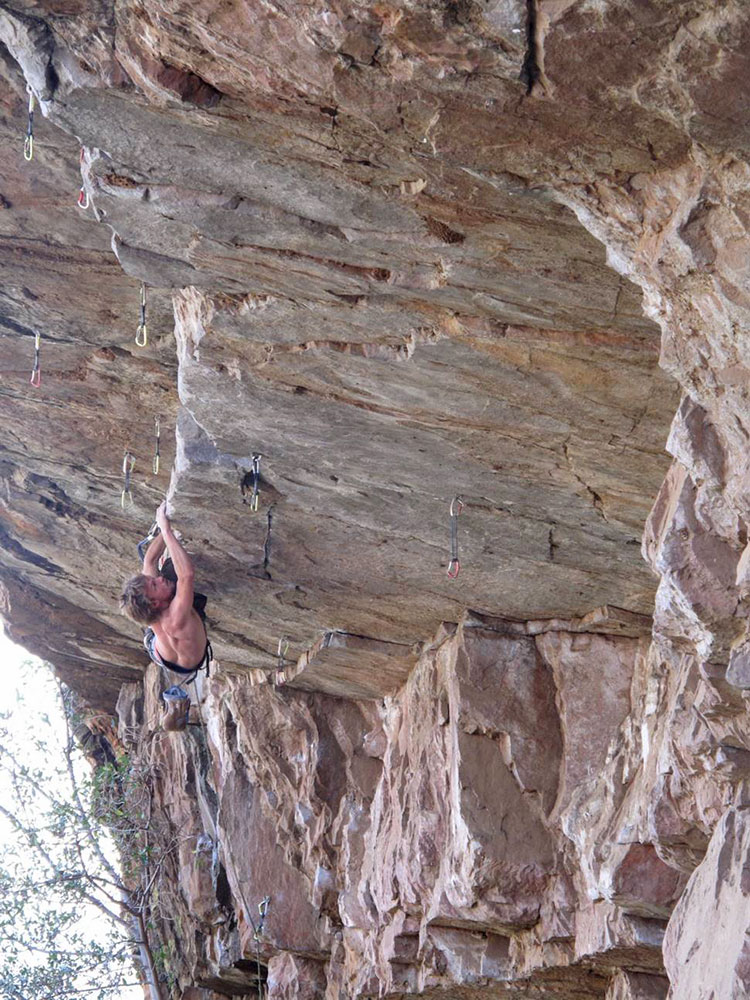 “Flawless movements up to the crux, like I had been climbing it for a year. I pulled the crux. I dont recall celebrating, because the beta was changing again…. I slipped a few times. This wasn’t going as perfectly as I envisioned minutes earlier. Fml what was I doing. Sending? I got to the kneebar rest before the lead out. I had done this many times, but it was always super stressful and remained tricky even when rested. I tend to give up at the chains, and try again. Not today. I had thoughts of not pulling the chains, but all was soon forgotten as psych rose from the base below. I was blowing minds:) My mind was being blown”. Photo by Andrew Pedley

Ebert tried Megalomaniac off and on for a year or so, feeling light on the day of his send, with mind free of ego, full of confidence.  Megalomaniac means “someone with delusional fantasies of power”, clearly not a self-reflection.  Well done Ebert, I salute you.

Ebert is sponsored by Mountain Mail Order.  He wears 5.10 shoes and climbs on a Mammut rope, and uses Flashed Draws.

Previously known as Forket, he is moving away from his trolling tendencies and into the light.  Expect more hardness and psyche from him.

Finally, ALL bolts hangers and chains at the Man Cave were supplied by the Mountain Club of South Africa (Joburg and Magalies Sections), respect and thanks due.

6 Responses to The Megalomaniac