You are here: Home › BASE Jumper Rescued on Table Mountain
Posted by CityROCK on Mar 18, 2016
0

The Western Cape Department of Health EMS/AMS rescue helicopter was dispatched to Table Mountain just before 12 pm yesterday afternoon. It was reported that a 31 year old female base jumper launched off Table Mountain at approximately 9am yesterday morning. Her parachute became entangled in the rock face shortly after she launched with her jump. She was suspended precariously from a ledge in worsening windy conditions. She was hanging upside down by one rope of her parachute for almost two hours. This rescue oeration required ten rescuers to be inserted onto the mountain via the rescue helicopter.

A rescuer was rapidly inserted to secure her on the mountain while a rope system was rigged to haul her up. Three hours later and amazing team work the patient was hauled to the top of the mountain where the Western Cape Department of Health EMS/AMS rescue helicopter hoisted the patient and rescuer off the mountain. After assessment by the medical team her only injury was a minor injury to her foot – she walked away from what could easily have been a fatal accident. 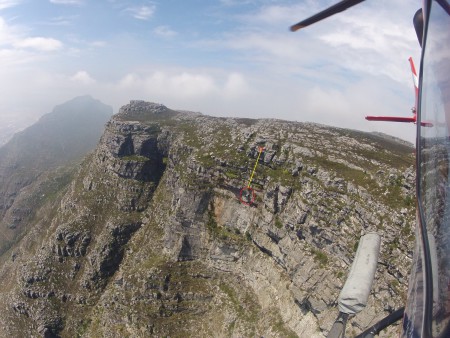