The below is an article from podiatrist Megan Maddocks for the Family Podiatry Centre, detailing the long term effects a poorly fitted climbing shoe can have on your feet.

The sport of rock climbing, be it recreational or competitive, is becoming more and more popular(1–3), yet there is little knowledge regarding the extreme footwear used, nor the injury profile of the lower limb(1). 98% of climbers wear excessively tight footwear and 91% experience foot pain while climbing (1). There is a perverse culture among rock climbers, that foot pain is a normal aspect of the sport(1). So much so, that an increase in climbing ability is seemingly impossible without some level of discomfort and the detrimental effects on the foot are often overlooked(1).

Rock climbing requires highly specialized shoes that are designed to maximize the climber’s ability to grip onto small areas, on real or artificial rock surfaces (2,4,5). They are flexible shoes, of varying shape, as seen in Figure 1 and 2, with “sticky” rubber soles (4). As for any shoe and any sport, shoe design and correct sizing are very important (1). The asymmetrical shape of these shoes increases the contact area of the foot, however, this results in the foot being forced into an unnatural position(3). The typical, recommended fit for these shoes is one size smaller than an athletics shoe(4). This enables a greater amount of control on tiny surfaces (4). Rock climbers, however, have a tendency to wear climbing shoes that are about 2.5 (UK) sizes smaller than their foot size and up to 4 (UK) sizes smaller than their street shoe size (1,3). As seen in Figure 3 and 4, some climbers wear shoes that are shorter than that of their feet(1)! There is also huge variation in the manufacturers’ sizing and designs(1). This variation creates unreliability and makes footwear fitment choices particularly difficult(1). 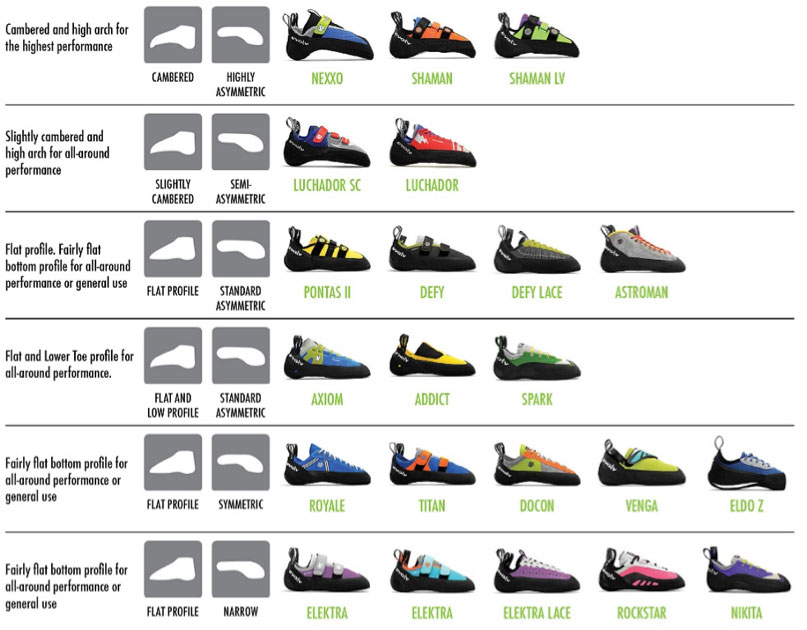 Climbers are not aware of the risks and problems associated with their extremely tight footwear (1).  This ill fitting footwear may not result in any immediate problems, but there are serious long term problems that may only manifest later in life(1).

Corns and callous, which are areas of abnormally thickened skin are evidence of poorly fitting shoes in general.  This is made worse in extremely tight fitting shoes, where there is increased pressure and friction between the shoe and the skin(1).  This is typically present on the top and bottom of the feet, especially the toes, as seen in Figure 5 A & D (1).

Lack of shoe length results in increased pressures at the back of the heel and the front of the foot (1).  This results in the shoe cutting into the back of the heel, causing pain as a result of inflammation of the bursa between the Achilles tendon and the calcaneus (heel bone), which is known as retrocalcaneal bursitis, as shown in Figure 6 (3).  It may also cause inflammation of the Achilles tendon itself (Achilles tendonitis)(3), or a bony enlargement of the heel bone, known as Haglunds deformity, as seen in Figure 5b (1).

A short shoe is also associated with deformities of the lesser toes, such as claw and hammer toes, as seen in Figure 5D and Figure 7 (1).  Constrictive footwear results in the toes being bunched up.  Eventually the toes remain in this position as the ligaments and tendons around the affected joints shorten.

There are many toenail issues associated with this sport and its tight shoes.  The nails may either thicken (onychogryphosis), become brittle (Figure 5C), or lift from the nail bed (onycholysis) (1,3) with the constant pressure of the very tight shoes.  Ingrown toenails may also be the result of tight fitting footwear and/or poor nail cutting technique (4). Fungal nail infection (onychomycosis) is also a common problem among rock climbers(1,3).  Fungus thrives in warm, moist and dark environments.

These shoes offer the perfect environment for fungus as the rubber and synthetic materials of the shoes do not allow the foot to air and, they are warm and moist due to increased body temperatures and sweat during exercise.  Other nail conditions seen in rock climbers as a result of their tight shoes include: splinter haemorrhages (1), which are small and subtle areas of bleeding under the nail, and subungal haematoma (1), which is a bruise or blood blister under the nail.

Hallux Valgus or bunion deformity, as seen in Figure 8, is the lateral deviation of the great toe and bony lump that develops on the inside of the great toe joint.  This deformity is highly associated with tight footwear, and so rock climbers are at a greater risk of developing this deformity(1).  Narrow shoes may also result in tingling and numbness as they compress nerves in the front of the foot (3).

Ankle sprains are also associated with rock climbing (3).  The shoes, and how they affect the foot structure, result in the foot being in a supinated position that is laterally unstable and at higher risk of recurrent lateral ankle sprains (rolling over the outside edge of the foot)(3).

Another large concern about rock climbing footwear is when it comes to the youth.  Prolonged time spent in such constrictive shoes may limit growth and encourage deformity as skeletal maturity is not reached until the ages of 19-20 years in females and 22-23 years in men(5).

The majority of rock climbing injuries regarding the foot, are due to the extreme footwear (5).  The onset of this is associated with highly asymmetrical (very curved and pointed) shoes, increased climbing difficulty, competitiveness and the male sex (3).  It is recommended that climbers remove their shoes between successive climbs, and also that they avoid these extremely tight shoes. (1) Much of this advice, however, is ignored(1).

One of the gold standards for foot health is correctly fitting footwear(1).  The lack of this in the sport of rock climbing, raises our concerns for this group of people(1). 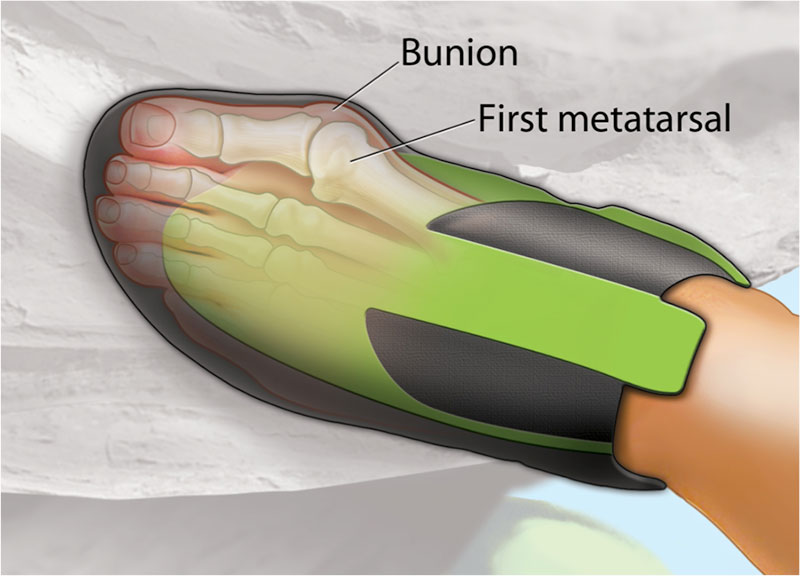 2 Responses to Rock Climbing and Your Feet