To celebrate the 125th year of the MCSA, here are our Supertramps who will be exploring the world:

Already there: 19-year-old Micha Stiller is trekking solo for 600km in Nepal from Bhimdatta to Kathmandu

Later in the year:
– Chris Arderne, Michael Kloos and Rick Kotze will bag volcanoes in the Cordillera Neovolcanica and climb in Mexico
– Alex Bester will climb in the Pedras Negras in Angola in November together with Ebert Nel
– Jed Johnson and team mates, Craig Burton, will climb at the Hand of Fatima in Mali in November
– Tiffany Wells and team members, Kirsten Roberts and Sam Stainton, will climb in South East Asia at the end of 2016. Congratulations and the best of luck to all!
Sincere thanks to the donor for a cool R128 000. 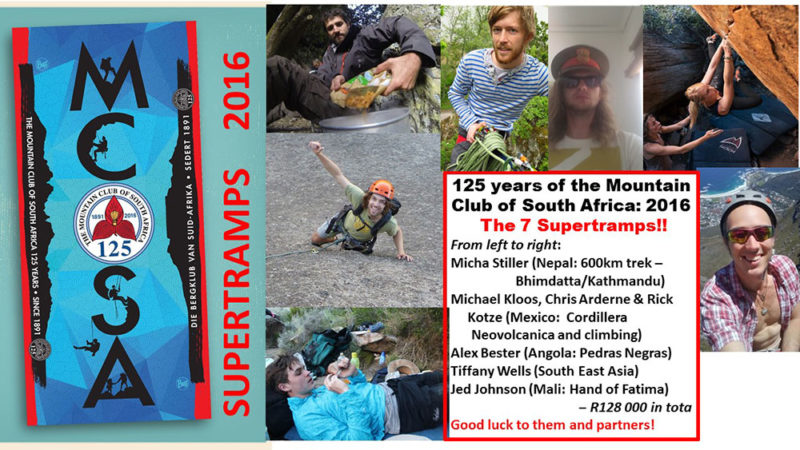 Not all those who wander are lost. –JRR Tolkien

The MCSA Supertramp Award has been administered by the Magaliesberg (Pretoria) Section of the MCSA since 2005 for those young, impecunious wanderers whose cynicism is still directed outwards, in the hope that they will purchase at least a map, and as a tribute by the donor to the voyager who was Alexander Supertramp who wisely gathered his rosebuds whilst he could (Read Into the Wild by Jon Krakauer).