You are here: Home › Cederberg Cleanup – Litter in Pristine Places
Posted by Willem Boshoff on May 18, 2016
10

The English language have developed a vocabulary that assigns identity to the perpetrator if hideousness of the act or crime is sufficient, for instance if you commit “murder” you will henceforth be known as a “murderer”.  For misdemeanours of a more benign nature we generally concede that the individual may not deserve a specific tag for the misstep, and hence those who vote for Trump, play techno music full blast, or jump queues will just be referred to as “assholes” or some other colloquial expression.

I see the need to add to the English language some word that can do justice to the act of littering.  We should however consider degrees of littering – without trying to justify any of it – but in the squalor of a squatter camp, or central Jozi where rubbish-bins overflow, one has some understanding of the act.  It however takes a special kind of callousness to venture into nature and drop your rubbish in a pristine environment, and for now I consider the guilty (albeit a bit juvenile in the word formation), as “litter-shits”, and those who drop cigarette buds get the special designation of “ash-holes”.

The most recent crime scene I visited was Boulder Camp, right next to Crystal Pools in the Cederberg.  It takes a full day to hike there and the trail takes you through some of the most stunning terrain the Cederberg has to offer.  The site is nestled between two rocky outcrops on a level grassy patch, sprinkled with some large, shapely boulders and flanked by a bubbling stream with clear pools.  Truly a bit of paradise.
What made the discovery annoying was the knowledge that the culprits were all on an overnight hike – surely they should know better? 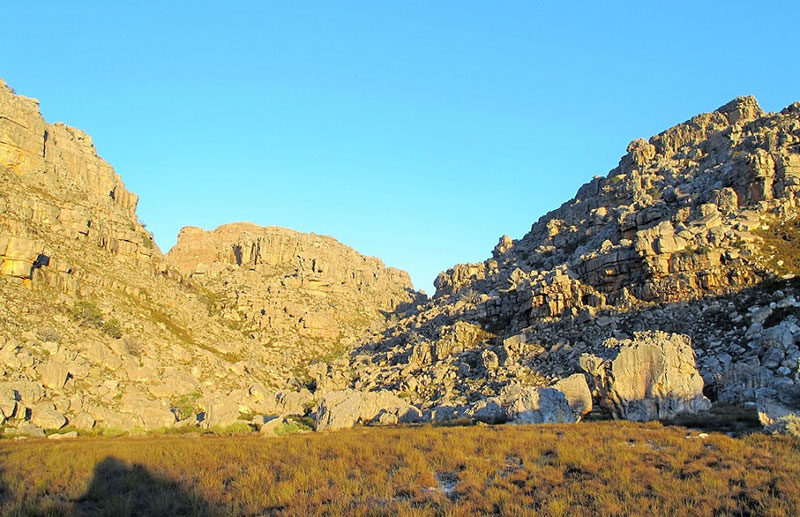 We were a group of 6 friends doing a 5-day hike and this was our first overnight site, which was also the most remote of all the spots we stayed at.  It was quite shocking to discover the amount of littering – there were numerous places where toilet paper and turds were on camping spots, probably the result of carelessness or the inconvenience of rain.  At a particular spot a large amount of rubbish (plastic, packaging etc.) was dumped and we also found some random items like an old pair of undies. 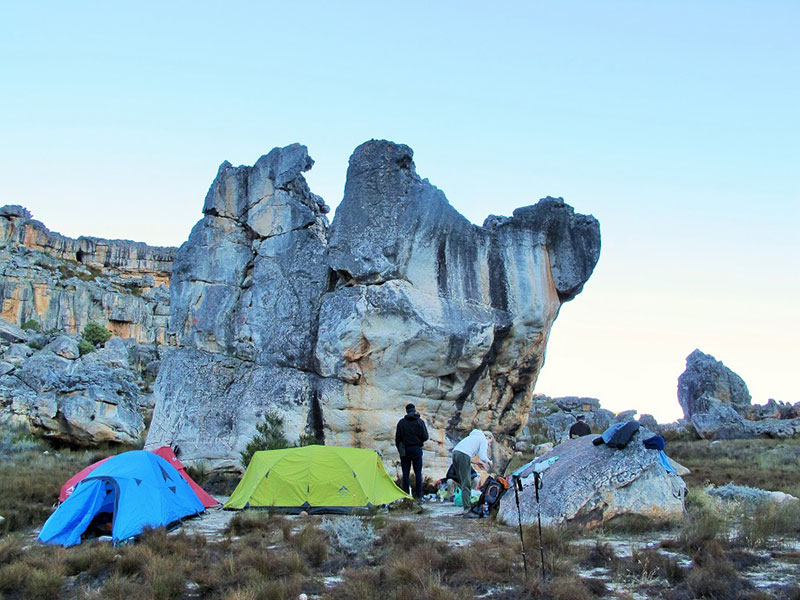 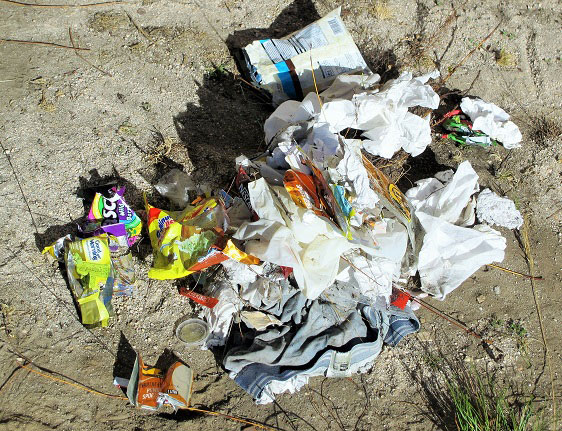 We could not in good conscience leave the place the way we found it, and proceeded to clean-up the morning of our departure.  Seeing that we had 4-days of hiking ahead of us, and that there was nowhere close by to dispose of the rubbish, we decided to burn it.

I have to note here that burning certainly is “plan B“, only to be executed when:

1. Circumstances are favourable (no / little wind)
2. An appropriate spot is available (in this instance a large sandy patch)
3. Due care is taken (3 of us were on standby with water bottles should a cinder escape and the ashes were drenched after the fire burned out)
4. Heavy plastics, like water bottles, and other materials that do not burn to ash are rather carried out (which we did).
We used some dry sticks to build a fire since rubbish rarely burn to ash by itself. We guarded the fire carefully and buried the drenched ash.

Mission accomplished and it felt good!  To be honest, I did not think much of what we did – to me it seemed obvious that one cannot leave the mess.  The only stretch was to collect other people’s loo paper, but some sharp sticks eased the gross-factor. 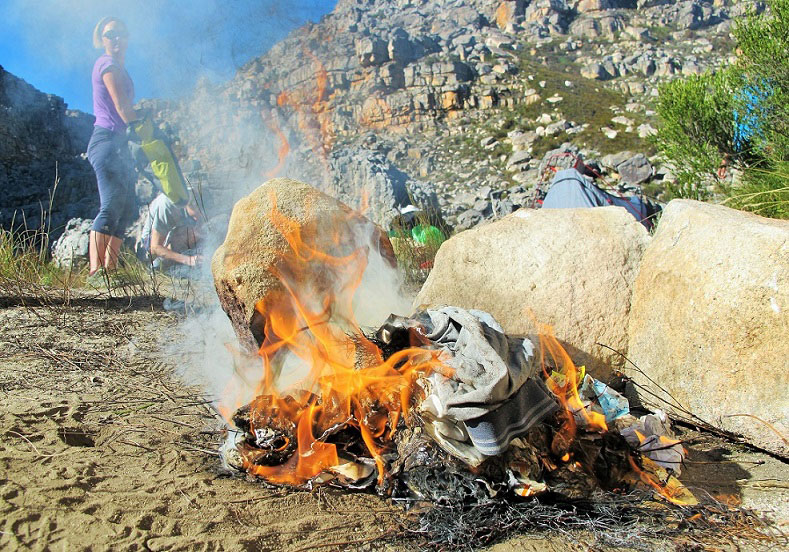 Some pointers on littering, paper and plastic

In a group lead by example: make it part of the trail-briefing to give instructions on how to deal with rubbish, and pick up any litter found in nature.  Do not be scared to confront people who litter; do it courteously and try to win their cooperation instead of just having an argument.  If they don’t comply; clean up after them, it is the right thing to do!
Litter is like graffiti: one piece is often the cause of proliferation. Cleaning up may keep others from dropping their rubbish at the same spot.

Toilet paper is by far the biggest culprit and is often found in completely inappropriate places: right next to crags, trails, water sources and campsites.  The rule is to do your business at least 30m from any of the aforementioned and add 20m if it’s a #2, then bury or burn the toilet paper (keep in mind the rules for burning – its better to carry out if possible).

Plastics, tins & other packaging should be carried out; to be burned only when there is not really another option.  Plastic “spring water” bottles is the biggest plastic pollutant in the world and the industry should not be supported.  Buy stainless steel water bottles – they’re classy, indestructible and your water taste better.  It is naturally BPA-free (and free of whatever other chemical nasty the BPA has been replaced with).

Lastly, do not wash in water sources that rely on seepage or slow running water.  Rather fill containers and wash well-away from the source; it is not only to keep drinking water pure, but also to protect the sensitive eco-system.  In fast flowing water use only bio-degradable soap, and the minimum amount.

Wild fires are mostly man-made, and can be devastating in areas with dense vegetation or strong winds.  The numerous burnt-skeletons of the slow-growing endangered Cedar trees is testimony to this scourge in the Cederberg.  As a rule, no fire should be made when there is wind; and any fire should be doused properly. 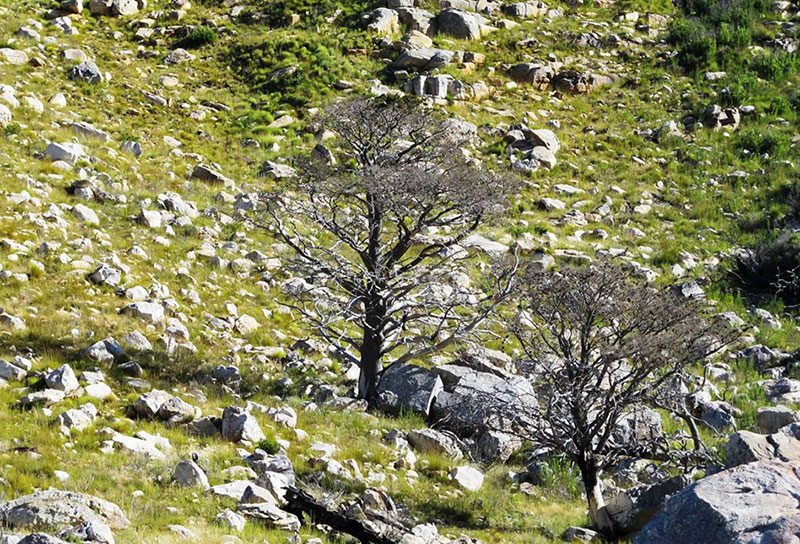 On a windy day we once happened on a small fire near Wolfberg arch, probably started by a discarded cigarette.  We started putting the fire out by throwing sand on the brushes, but the speed at which the fire spread was frightening.  The root systems of sand-doused tufts of grass caught fire underground, and when the wind blew over the sandy, porous soil you could see the red glow running below the surface as the fire spread underground from one brush to the next!  Luckily due to large boulders and limited vegetation we could contain the fire and let it burn out by itself. 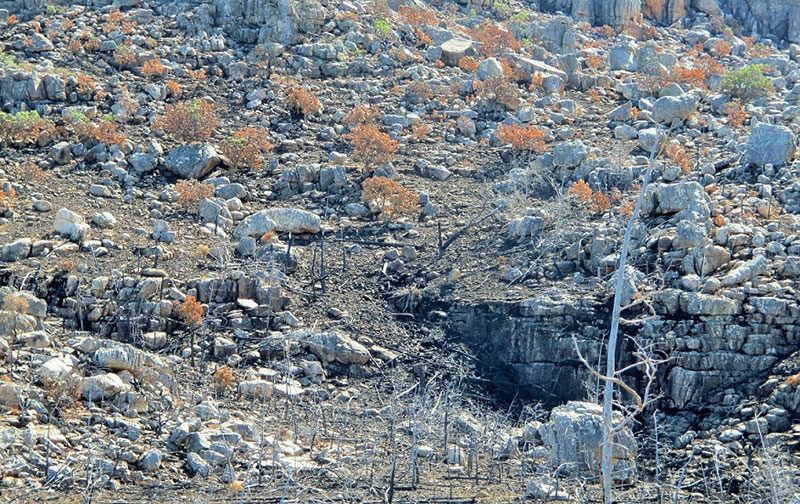 Cleaning up is not a chore

There will unfortunately always be those who litter.  It may feel unfair to have to cleanup after them, but consider it as an act of service to nature.  Littering is violence and cleaning up is taking care of the victim – it is something very positive and a privilege! 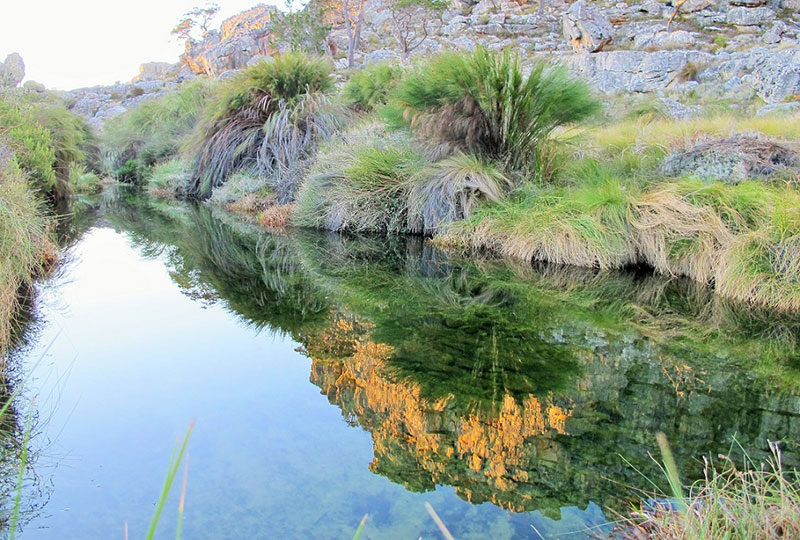