It was seven years before I was able to return to Bokloof farm in the Baviaanskloof.  I always knew that I absolutely had to go back for the many potential projects I had found but never got around to doing on my first visit in 2008.  My life went in many different directions to many wonderful places, yet the magic of the Baviaanskloof was never far away in my thoughts.

The Baviaanskloof is one of the last really wild places in South Africa.  The chaotic geology adds to the wild feeling of the surroundings. However, when one stops to take it all in the wild setting is curiously juxtaposed by an overall feeling of tranquillity that permeates those mountains. Donovan Willis showing his guns on an unnamed 29 in Waterkloof, Eastern Cape

I returned at the beginning of 2016 with a friend, Basil, from Switzerland who is also motivated by the adventure and creativity (and hard work!) of putting up new routes.  Our objective was to put up more easy to medium difficulty routes, thereby allowing more climbers to enjoy the beautiful kloof and its climbs.  We had 100 bolts and hangers and yet it still wasn’t enough to satisfy our enthusiasm for first ascents at Waterkloof.  We ended up leaving with more projects than we had on arrival!

The routes we did put up gave us tremendous enjoyment and we felt very privileged to have had so much quality routes to choose from.  We opened five new routes in total ranging from 16-29.  The climbing can be described as very “sporty”.  The routes are 12-15 bolts long, the climbing is very pumpy and athletic and the rock is excellent.

We would like to thank the farmers, Quintis and Anina Bezuidenhout, for their hospitality and we look forward to seeing them again soon. 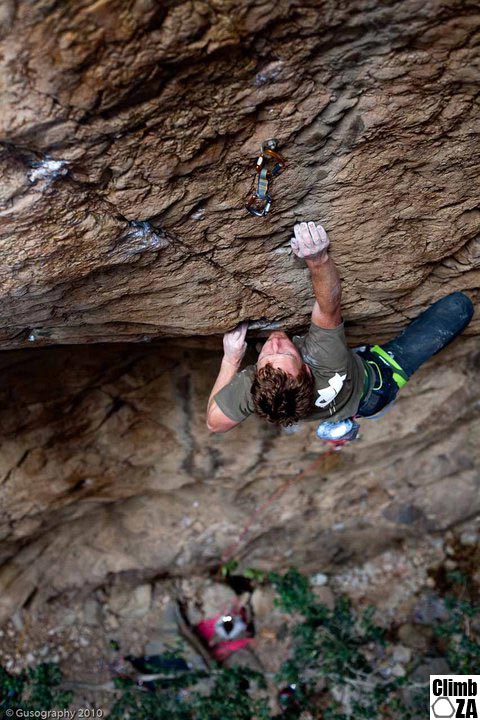 Andrew on The Emperor (8b) at Waterkloof in Baviaanskloof. Photo by Gustav Janse van Rensburg