The perimeter of the glacier was becoming a silhouette and the sharp jagged spires of the Ag. Du Tour were outlined by the approach of dawn and the rising sun. Although not really visible the Ag Chardonnet massif loomed above us and ahead. I was musing on the possibility (although considering how long I have been climbing), rather, the probability of having an Epic. I do believe and indeed it is self-evident that one is never too old to learn and epics are the best way, albeit the hard way, to learn. I entertained the notion of being swept a 1000m down the mountain with my buddies in an avalanche but nevertheless coming out of it unscathed and indeed this turned out to be an ominous premonition. 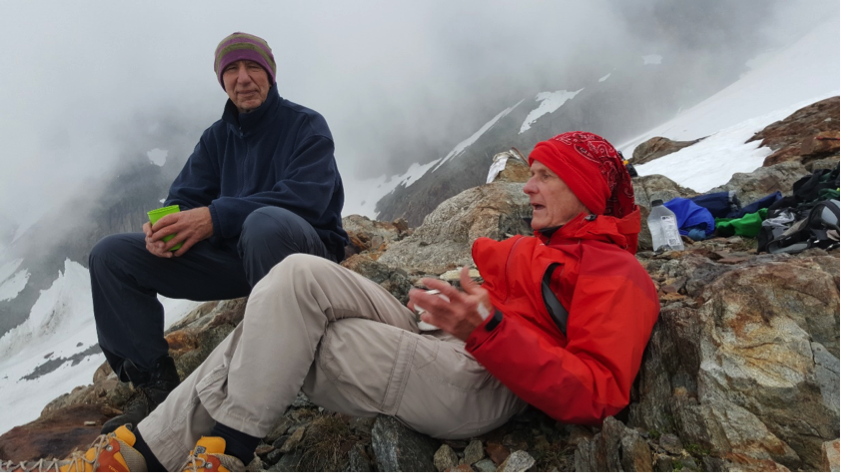 Tony espousing at our bivvy 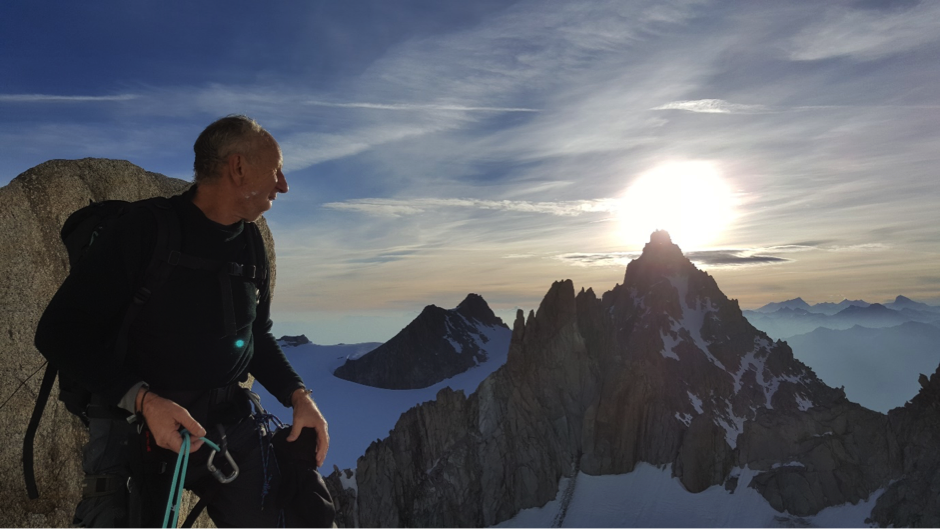 Sunrise behind the Ag du Tour 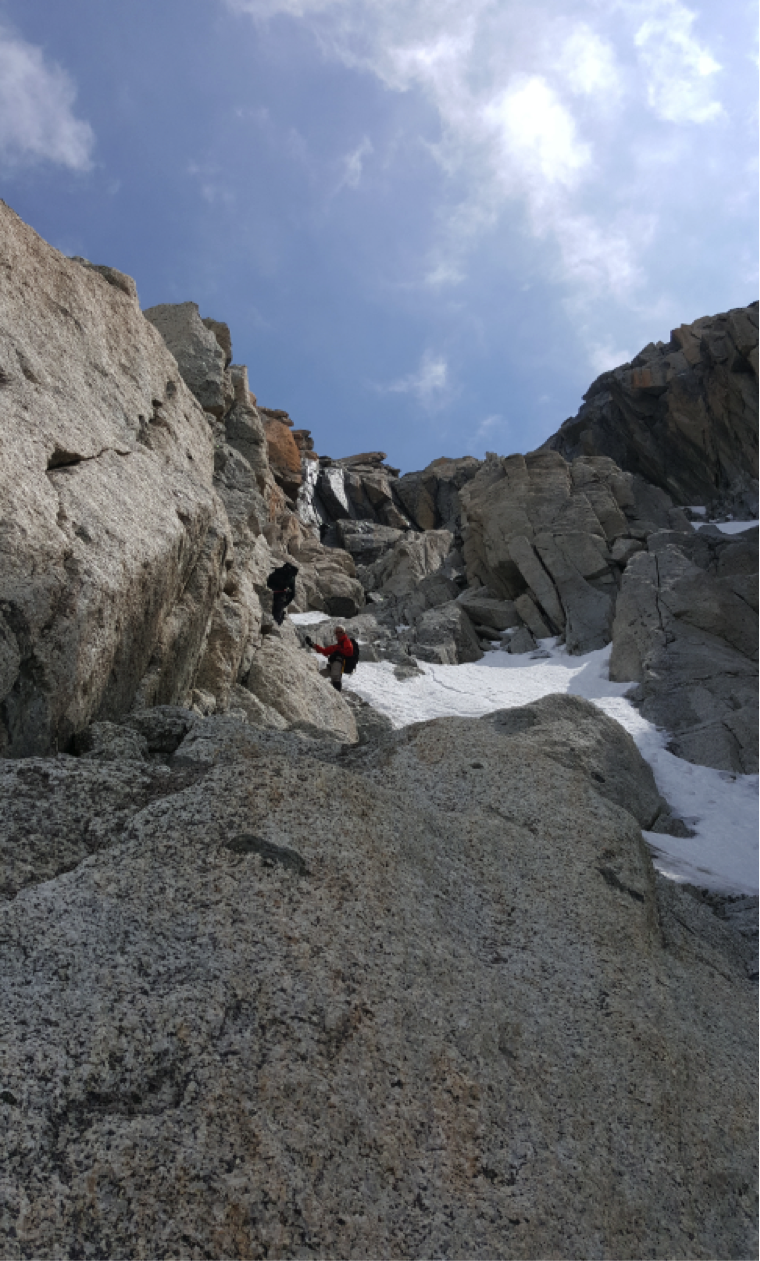 After 2 hours of slogging in the dark from our very cold and uncomfortable bivvy spot with head torches we came to the start of the actual climbing. 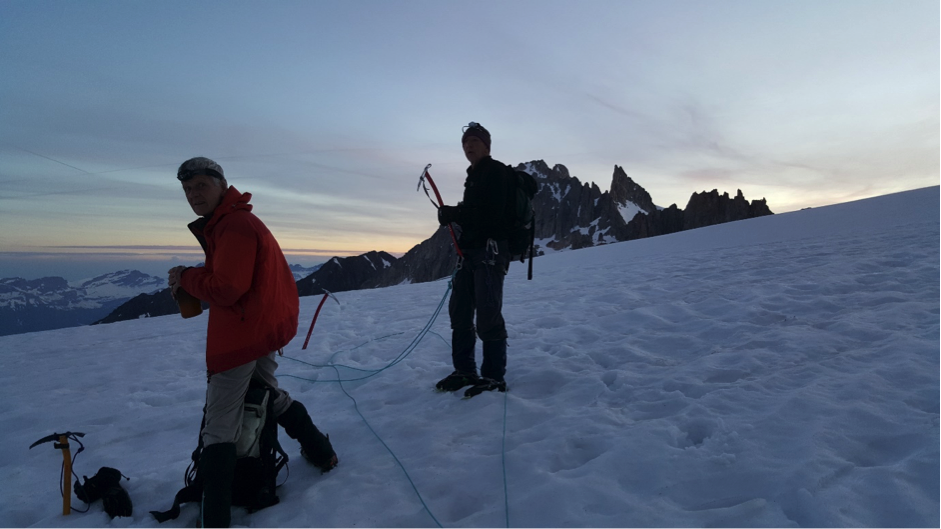 In the gloom just 30m to our right remained the debris of the previous day’s avalanche that was not impressive by its volume but indeed impressive by the size of the ice blocks that had broken off from the seracs above.
There was a party an hour or so ahead of us – a good sign. But none behind us – bad sign.

The weather report was pathognomonic of thunder showers around midday but we were to be well of the mountain by then.
The day before we had bumped into 2 sleek looking youths as they were leaving the hut. They had done the Forbes arête, our mission. It was 5 pm which meant a long walk down of a further 1300m descent to the Le Tour as the cable car at the Col de Balme closed at 17h15. They claimed they started too late resulting in very poor snow conditions that slowed them. We neglected to enquire what time they actually started climbing! Tony who had previously done the route had planned to start the route at 6am and at this stage we were still bang on schedule. But why was one of the most popular routes in Chamonix only being attempted by 2 parties?

We started up the first slope and the snow was already a bit sugary. We weighed our options whether to continue or go for a lesser goal like the Ag Du Tour behind us. There was also a section of steep ice above us. We decided to keep going. Tony set off up the snow slope and we navigated some steep ice front pointing. The route continued steeply above us and then headed up right to a shoulder where the first rays of the sun hit us. The view was spectacular and the snow conditions were improving.

Sunrise behind the Ag du Tour

I felt pretty fit and strong but it was evident that Butch who was off the couch and was seriously jet lagged was struggling. He is 70 years old and had not alpine climbed least of all at altitude for 25 years or so. Tony is just behind at 68 but well versed in Alpine climbing and quite fit.
Tony was at this stage happy to hand over the lead and I set off up the final snow slope to the base of the ridge. Negotiating this and the ridge was tricky, slow and at times hazardous due to very soft snow that avalanched twice down the north side. There were two short raps and complex mixed climbing till we reached the Summit. 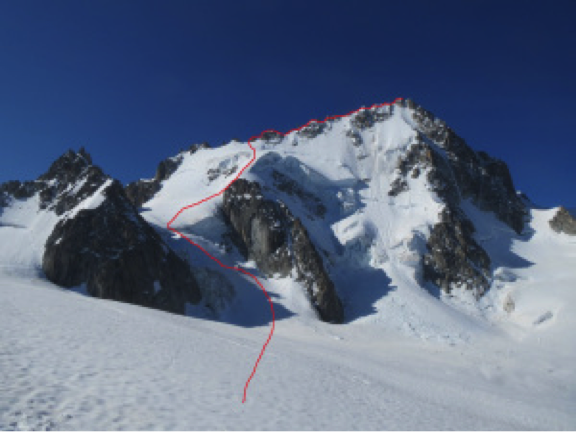 I recalled the weather report that heralded thunder storms and it was at this stage that I realized I would miss my flight. Butch was fatiguing and fumbling clipping himself into the belaying partly due to his bulky mits. At the summit, 3824m, which we reached around mid-day (2 hours later than scheduled) I refrained from taking photos to save battery power on my phone and every second started to count. Dehydration was setting in and I was lucky to find a small rock pool of water just past the Summit which I gulped thirstily.
Around us dark black thunder clouds were gathering and lighting and thunder crashed loudly from time to time.
We started down the descent that again involved some mixed climbing and balancing down snow ridges atop tenuous looking seracs. Then there were 3 short raps down a gulley to the first snow slope. We only had a 6.9mm 25m rope so the last rap down the snow slope landed us on a rocky ledge at the start of the slope which was very steep. I tested the start and started front pointing down. It seemed safe enough in that if I fell I would merely fall down the slope about 100 or 200m or so to where it flattened out.

Butch was having none of it and I pointed him to another rap point round a block the size of a coffee table that had obviously been used many times as there was tat of varying degrees of wear round it and a mailon. Tony was just below Butch also soloing as Butch started rappelling but I was about 15 metre below still on very steep icy snow. Suddenly the was a loud shout and general noise and I looked up to see what was indeed an avalanche. I very quickly moved left a metre or two as the avalanche hit me and I clung desperately to my ice axe as a maelstrom of snow, ice, bodies and the massive boulder crashed down to the right of me with debris tugging at my shoulder and right arm. It was over in no time and I was still stuck to the side of the slope while below me there were two bodies lying in a jumble and the boulder below them. The bodies moved and sat up and the snow started turning red around one of the bodies. I asked the futile question if my buddies were OK and wasted no time in continuing down which took some time as they were at least 100m down the slope.
Butch was bleeding from a gash on his forehead and had a variety of impact points from the boulder including his shoulder which had recently been replaced. Tony and him we found out later, at gashed their calf muscles probably from crampon tips or whatever.
By the time I got to Butch the bleeding that had been profuse had slowed and Tony had a dressing which we applied and kept in place with a Beanie. 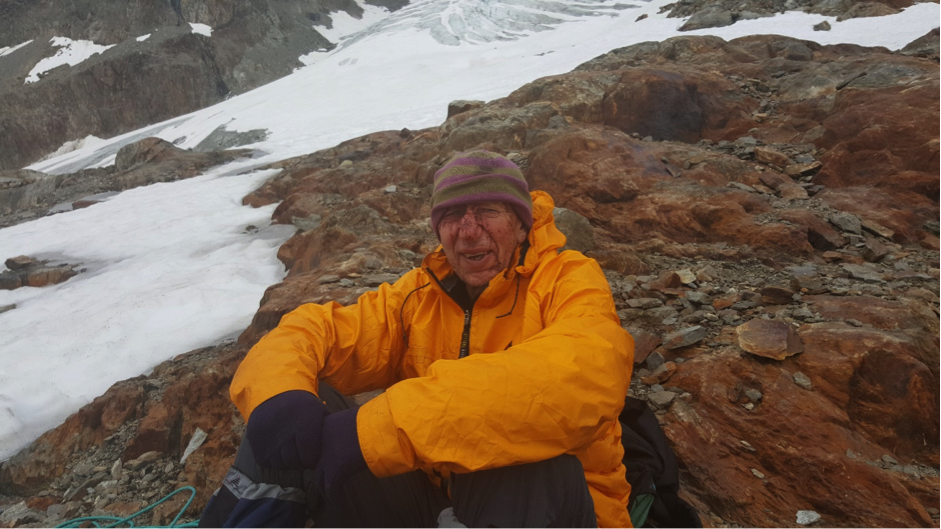 We composed ourselves and wasted no more time in continuing down in what was now a white-out.

The snow conditions were extremely poor and the avalanche risk was increasing so we roped up and headed further north to rock pillars and did 4 complicated and time consuming side-ways rappels to cross the berg-schrund that we knew was below us.
We eventually found ourselves below the schrund and then found the previous party’s tracks which led us down to safety on the glacier. We eventually stopped for a break and made hot drinks and had lunch. It was then a slow slog to our bivvy spot where we collected our kit, made more tea and then shimmied our way to the Albert Premier Hut. There Butch washed the blood of his face and a glass of wine and beers for my buddies led to a debate as to whether we should bivvy or stay at the hut.

Discussion with one of the very young and lovely hut attendants confirmed that the block that was pulled of was known to be dodgy. How about that!
Tony as always wanted to bivvy but Butch got us a cabin or dorm to ourselves. Delicious soup, cheese and bread warmed and filled us and I had another glass of red wine.
The decision to stay was correct as Tony discovered that his one calf was massively swollen and tense and walking was out of the question. Between my two buddies they discovered a host of other minor injuries too. Also, that night all hell broke loose as the mother of all storms hit the mountain. It was fortunately spent the next morning and we could amble down in some degree of comfort to the Col De Balme and catch the chair lift down.
I did miss my scheduled flight back to South Africa the evening before but Emirates charges a mere R500 to change the flight.
So what did I learn from this adventure.:

• Research the route before you climb it. Do a general enquiry from the hut guardians about the route. They will provide relevant info. Also read up on it on the internet.
http://www.summitpost.org/chardonnet-aiguille-du/150680
https://alpineexposure.wordpress.com/2013/10/06/forbes-arete-on-aiguille-du-chardonnet/
Forbes Arete, Aiguille Du Chardonnet.

The suggestion in summit post is to descend via the route we climbed. I must say I disagree with this unless the conditions are really good even though we pulled off the block that we did.

• Be at the base of the route by 4am. Not 6 like we were.
• Wear a helmet. I did. My buddies did not. Butch would not have sliced his forehead open if he had.
• Climb with someone younger and stronger than yourself.  Kinda weird when you are the youngest dude at age 57 in the party.
• Be lucky.  We were.  Although I was not at all injured I was by far the luckiest of the three of us in the sense that my buddies fell with the boulder and the whole gang bang went down the hill together.  If they (with crampons) or the rock had struck me at speed……..???????
• Read this: