You are here: Home › The Birth of the Vertical Triathlon
Posted by CityROCK on Sep 2, 2016
1

The Future of Climbing in the Olympics. How did we end up with a multi-discipline Olympic climbing event?  What’s next for athletes? Is the sheen of a gold medal reflects the future of the sport. After the initial excitement following the announcement of climbing’s inclusion in the 2020 Olympics in Tokyo, athletes are opening up about their anxieties regarding the fact that climbing will be included.

The snag is in the event structure. Medal winners will be ranked based on a collective score from three disciplines: sport climbing, bouldering, and speed climbing.The new format would also require pros, many of whom have made a name for themselves on rock rather than plastic, to give up outdoor climbing time to train on gym routes—not a shift that appeals to many elite climbers. Replacing first ascents and hard outdoor sends with gym time could also limit the interest of sponsors promoting gear or Instagram followers looking for picturesque routes.

The International Olympic Committee’s (IOC) first granted the International Federation of Sport Climbing (IFSC) provisional recognition in 2007 which is essentially an honorary title allowing the sport to go on to the next round decision-making for full Olympic inclusion. The IFSC had originally proposed three individual events in addition to a medal for combined rankings, but an IFSC representative wasn’t present for the actual deliberation. IOC and Tokyo Organising Committee gave climbing the nod for 2020 but only offered two medals; one for men, and one for women.

Despite its smaller athlete base, speed climbing’s inclusion might have been key to the IOC’s acceptance of the whole package. In fact, speed could actually be considered the most suitable for televised coverage for a non-climbing audience. To viewers, the goal—get up the wall as fast as possible—is obvious, and the score—fastest time—is the objective. “It’s true that the principles of speed performance are different from the other two disciplines,” IFSC Sport Director Jerome Meyer admitted. “However, the logic of our decision was pretty simple: All our athletes will be able to participate.” The IFSC’s primary motive, he emphasized, was to avoid leaving anyone out

“In speed climbing, competitors could actually set world records,” said Alex Puccio. Despite doubts about the event format (She’s primarily a boulderer and would prefer to be recognized for her specialty discipline), Puccio still dreams of competing for Olympic glory. The publicity would not only push the sport further; it would open it up to those who could benefit from it most. We’ve got our foot in the Olympic door, but keeping it there requires some compromises.

We, as climbers and the fans, need to show the world how strong we are as we stand together for our sport! 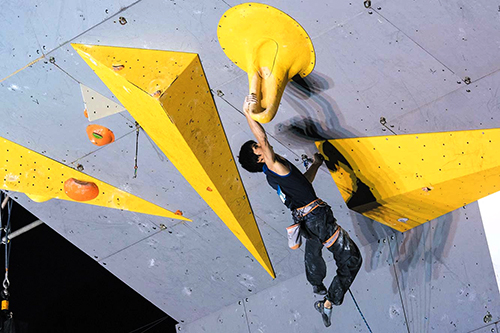 One Response to The Birth of the Vertical Triathlon