What an awesome experience!  The SA youth climbing team arrived at the Aloft hotel in Guangzhou, China rather exhausted after more than 24 hours of traveling but excited to learn that many of the other teams, USA, New Zealand, Australia, Austria, France, Italy and more were also at the same hotel.

After a quick check in and refresh we hit the road for a quick walkabout to orient ourselves, check the location of the wall, shops etc.  An early night and a day of negotiating the subway system, navigating to the Kailas climbing gym across town and shopping, brought us to the opening ceremony…   Our hosts, China Mountain Association, did us proud with fantastic performances with dragon dances, martial arts and ballet dancing and the flag parade setting the scene for the days to come. 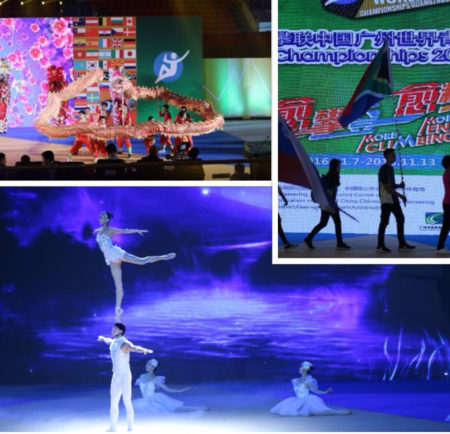 The sheer size of the climbing wall was quite intimidating, but the buzz of organisers and climbers preparing and warming up soon got everyone settled if not quite calm.  The competition kicked off with the lead climbing qualifiers.  Our small SA team performed better than in previous years but in my opinion, possibly lacked the ‘big-game’ temperament to really do their best.  Many of them not achieving the full potential and falling earlier than they were capable of.  Their rankings were,

We were all proud of their efforts and the climbers ended the day with mixed feelings and an excited babble of “Amazing!”, “If only I had…. “, “What was I thinking….” On the way back to the hotel.

Watching the finals with the world’s best competing was a joy.  These kids are simply an amazing testament to the ever-increasing standard of climbing.  Sam Avezou, Giorgio Benazzoli, Kai Lightner, Nathan Martin and the well-known girls, Ashima, Brooke, Laura Rogora, Janja and many others were a real inspiration.  As usual, the USA, Japan, France and Italy leading the charge with Great Britain right behind them. 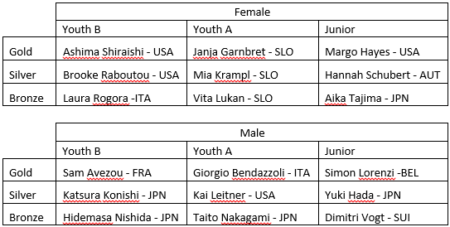 On day Three, the boulder qualifiers for Boys kicked off in rather damp weather with the rain picking up as the day went on. Eventually, the rain beat those trying to keep the walls and mats dry (even with the help of hotel towels) and the day was cancelled with everyone to climb again on Saturday in the semi-finals.

The girls were up the following day and as anticipated we found the boulder style of balancing on large volumes with lots of compression moves just too different to anything encountered at local comps..   Camilla, managed a good 2 bonus points putting her 41st out of the 54 competitors with Abigail, Allyssa and Hannah unfortunate to join the many climbers missing out on points. 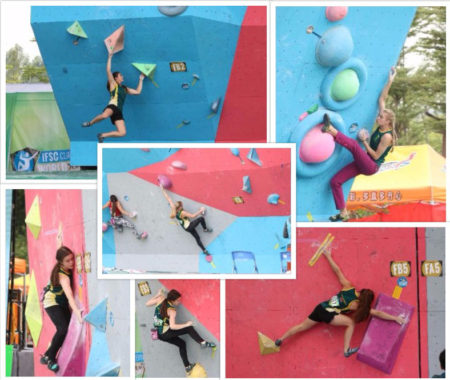 Back to the boys… all fired up to tackle the harder problems set for the semi-finals.  The problems were unbelievable.  Hard, but so innovative and beta-intensive.  The boys threw themselves at these with enthusiasm and managed to perform more to their ability this time.. The end results were that David and Chris all managed to top one of their problems giving them a bump up the rankings while Olly, Alistair, Damian and Nick managing bonus holds to end up with the following: 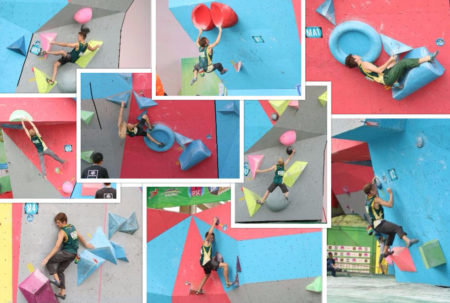 This discipline always sparks much discussion.  Without too much debate, speed climbing will be an integral part of climbing in the Olympic Games in 2020 and our team, with no speed wall in SA to practice on, acquitted themselves admirably.  David and Alistair managed a 34th and 35th place in Youth-B with 22 and 25 secs, while Damian did particularly well in Youth-A with a time of 16 sec.  The fastest time on the wall was Russian Sergey Rukin with a blistering time of 6.90 seconds in the ½ Final unfortunately falling in the final to end in second place to Gian-Luca Zodda of Italy..

I have a feeling that the new speed wall at CityRock Joburg will receive some interest in the months to come.

The future for SA competitive climbing:

The competition was for us a great success all round.  Our performance has been slowly improving and is set to improve in the years to come. Our young climbers returned not only having the competition experience but also having had a great social interaction with top climbers from around the world.  This had a hugely motivating influence and fired them up to do even better next year.  It is vital though, that we all get behind them, identifying and developing talent of our young athletes.  With cooperation and support from the gyms & route-setters to provide international standard problems, coaches keeping up with trends in coaching and competition style routes and problems and parents providing the vital support in making it possible to raise the work rate and expectation of what it takes to compete on the world stage, (and of course to get them to real rock as often as possible)

I believe that with the right mind-set and setting higher competition standards, our young athletes will rise to the challenge.   The time to start preparing for WYCH 2017 in Innsbruck is right now!