You are here: Home › Clanwilliam cedar could be extinct within the 21st century
Posted by Justin Lawson on Dec 23, 2016
4

A study by University of Cape Town researchers, published in BioMed Central Ecology in November, has confirmed a decline in the iconic conifer, the Clanwilliam cedar (Widdringtonia cedarbergensis), which gives the name to the Cederberg Wilderness Area (CWA) in South Africa. The trees appear to be susceptible to a greater frequency of fires and higher temperatures at lower elevations. The study investigated three main focus areas: population dynamics of the trees; environmental correlates with these dynamics and recommendations to conservation management.

Using a large and long-term (1931-2013) collection of repeat photographs together with environmental data and fire records, the study found that 1,313 living trees were recorded when plantations and natural populations were combined across all historical photographs. Of these trees, 967 trees died and were replaced by 44 new trees, with three of these plants having died in the intervening period. The repeat photographs also suggested that this decline has been most pronounced in the latter half of the 20th century.

In terms of environmental correlates with this mortality, “fire frequency, aspect, degree of rockiness and mean annual temperature all had significant effect” the study reveals. The study had a specific focus on photographs of trees at Skerpioenspoort, Middelberg, Welbedacht and Heuningvlei regions in the CWA.

Although trees that are located in open areas (areas that are not protected) did not have an increased probability of death, the study found a significant abundance of trees in rocky areas. The relative position of the trees was found to have a significant impact on the trees’ mortality, with eastern facing aspects appearing to be the ‘safest’ sites for trees.

White, the lead researcher on the study, said: “Without some dramatic intervention or change in climate and fire regimes, Widdringtonia cedarbergensis will continue to decline in its natural habitat with the very real possibility of extinction within the 21st century.”

Although the future for the species is bleak, the results point at possible ways to manage the trees. “There is an urgent need for heightened protection of high altitude populations (where conditions are cooler) from fire and continued research to more fully understand the causal relationship between climatic and atmospheric drivers on W. cedarbergensis mortality.”

Lastly, they also suggest more controversial interventions, such as “assisted migration to more southern cooler, high-elevation habitats should be given serious and urgent consideration, given slow growth rates and the long time to establishment for founder populations.” 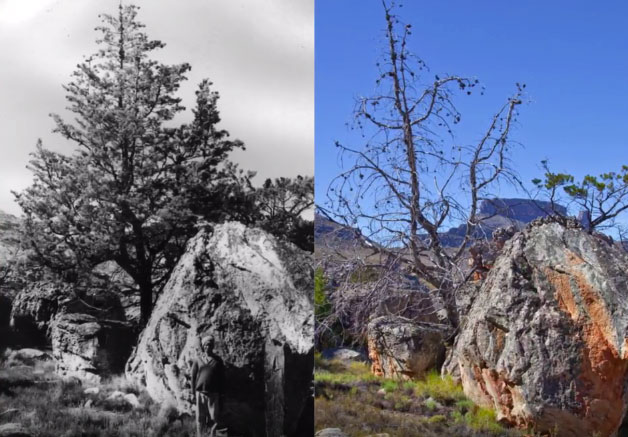 Redhill Dam Highline
How to Smear in the Hills