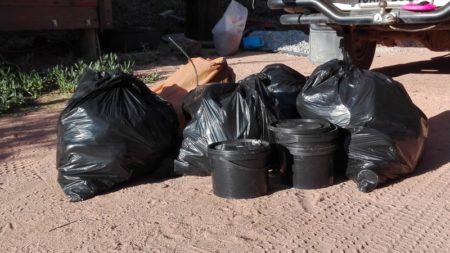 Seven dustbin bags, stuffed to the brim, largely with used toilet paper. This is what a group of more than 20 volunteers managed to collect during the recent Rocklands clean-up day. The volunteers – climbers and local residents – met at the De Pakhuys campsite on the morning of May 5th, and by splitting into teams, managed to do sweeping cleanups at Plateau Boulders, Fields of Joy, 8 Days Rain, Sassies, Arch Valley, Dihedral Boulders, The Coop and the main road entrance to De Pakhuys and Alpha Excelsior guest farms.

“Stemming from reports dating back to the 2017 climbing season, as well as interactions with climbers and local residents in the months thereafter, we were able to identify sites that have been hard hit by litter,” says Tracy du Plessis, local resident. “We picked up general litter and climbing tape; cleaned up chalk spillages and chalk graffiti; but the worst problem we encountered was the growing number and density of bush toilets.”

In a nutshell, Rocklands has boomed in popularity among local and international climbers. With this vast increase in climbing numbers, the area has attracted many people with little or no bush knowledge, including how to minimise the impact of answering the call of nature. Human waste, if discarded properly, breaks down in the environment quickly. In Rocklands, however, it’s fast become the ugly face of a growing problem.

Local resident James Cooper says the density of toilets is also an area of concern. “The soil has naturally occurring bacteria and microbes that help break down waste when buried, but it can only handle a certain amount at a time. So, a toilet spot here and a toilet spot over there and one further away – that’s fine, because the load is being spread over a vast area. What we’re seeing here is different: particular spots that are being used as ‘communal’ toilets year after year. The land can’t cope with that load and, if this continues, it will cause serious soil pollution in and around these areas.” 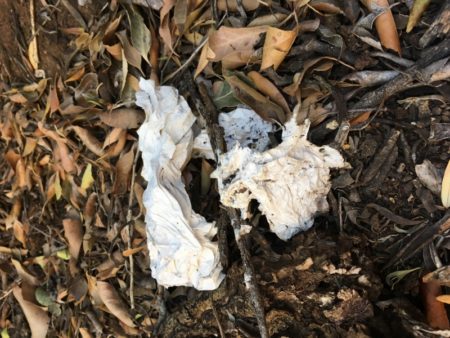 Complicating matters is a new trend – that of discarding sanitary pads and tampons in the bush near popular climbs. “These items do not break down at all,” says Tracy. “We appeal to female climbers to come prepared. Either take a bag and carry these items out with you, or consider switching to a menstrual cup.”

During a well-deserved lunch-time coffee break, sponsored by The Hen House, all present unanimously agreed on one point: the solutions to these problems lie in education. So, with this is mind, here’s the way to go when you need to go:
1. Take a long walk. Find a new and secluded spot.
2. Dig a hole and answer the call.
3. Bury the evidence.
4. Use water to clean yourself up, or if you must use paper, bag it and take it out with you. The same goes for sanitaryware.

Clearing up from previous area development

Another problem addressed on the day was reckless or impatient clearing while creating new routes. For example, during the expansion of climbing areas at The Coop in 2017, many trees were cut down or broken apart, and a mess left everywhere. It has been established that this was not the work of one group, but several, and an example of what can happen when area development becomes a “free for all”.

RAD’s plan to address these challenges is two-fold:
1. To offer support teams for climbers hoping to develop new routes. These teams will help identify vegetation and sites that should be left untouched, whilst helping to tidily and sustainably deal with cleared debris. Assistance will also be providing in making comfortable and ecologically sound access paths.

2. To develop a growing hub of information about the area, its history and ecology, to inspire informed development choices. 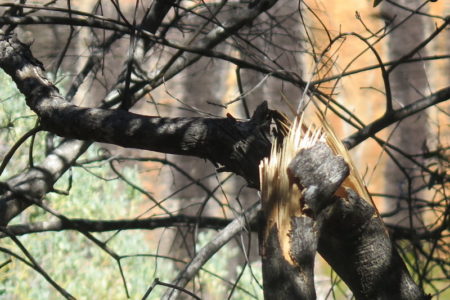 The impact of plastic

Plastic also featured high on the agenda, especially after local climber Micky Wiswedal found several large cat scat laced with plastic at the Fields of Joy boulders. “There were whole bags wrapped up in some of those droppings. It’s the first time I’ve seen that, and it indicates that plastic pollution is also on the up and up,” he says, calling on his fellow climbers to make sure no litter gets left behind when leaving the boulders. “This proves that it can – and does – end up inside animal stomachs, and it can easily cause deadly complications once there.”

International climber Frank Bogerman echoes this sentiment. “My ethos is to bring more out than what I took in. So, carry out your own trash, and try to pick up as much litter as you can to bring out with you as well. If we all did this, these special clean-up days wouldn’t have to happen, because we’d all be cleaning up all the time.” 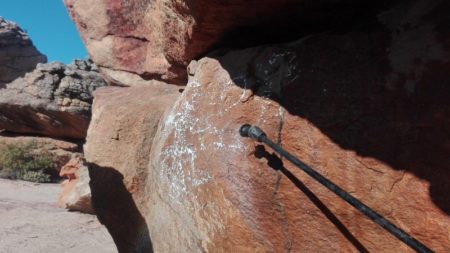 The Rocklands Association for Development will be hosting more of these days in the coming weeks and months. “This is just the start, there are so many climbing areas still to inspect and clean. Thankfully we now have some momentum behind us and the enthusiasm for this event was inspiring. There’s a lot of work still to be done, but also many hands willing to help us do it!”

4 Responses to Feedback from the Rocklands 2018 clean-up