This hike was originally advertised as Woody Buttress and Woody Ravine. However, the weather that day was about as windy as it gets, which, in Cape Town, is not to be sneezed at (because, obviously, the snot will blow back into your face). So, when we forced open our car doors at the top of Theresa Avenue, it took 0.3 seconds’ exposure to the freezing blast to come to the conclusion that this was Not A Good Idea At All And Not Going To Happen Nu Uh Nup No Way Neva.

We retreated down the hill to come up with a cunning plan. An unnamed hikist suggested an unauthorised entry into Orange Kloof.  Martin, who is Swiss, and very law-abiding (except, sometimes, for speed limits) immediately shot this shocking suggestion down.  Then we remembered Maori Bay and the Bos 400.

When we did the Oudeschip Trail a couple of months ago, Martin had longingly stared at the other, far more impressive wreck in the distance and suggested, not a few times, that we extend our hike to include it. Since everyone on today’s hike had already signed up for a good three or four hours of strenuous walking, it seemed only fair to give Martin his chance now.

We skipped the Sandy Bay section from last time and scuttled straight across the sandblasting dunes to the contour path, which we marched to the end of. Alison remembered vaguely that the trail to the Bos 400 was supposed to be ‘somewhere around the lookout hut’.  As we are wont to do, we missed it entirely (it is right next to the lookout hut).  We marched all the way down to the bottom of the extremely steep hill, making forays along various dead ends in an attempt to find it, but the most promising path was declared impassable by Wanda and Martin. After a picnic on the rocks, we even attempted a ridiculous traverse of a sheer cliff face, which was declared impossible by Derek and Martin.

Then we marched all the way up the long, steep hill again, thus performing a Grand Old Duke of York manoevre, but in reverse, and with rather fewer than 10,000 men. In desperation, we bushwhacked along the path we’d previously abandoned until we reached the proper path. And from there it was a pleasant, easy contour cruise to the wreck.  Oh, how we laughed when we returned and discovered how obvious the path we missed had been. (Yeah, no, we didn’t laugh much about it at all really.)
Hike details:

52CapeTownHikes rating: Probably Won’t Die (unless you try going along the rocks from Oudeschip).

Duration: 3h45m (including the Grand Old Duke of York March)

Trail directions we used:  None, which is why we went all the way down the hill and then all the way up it again. (Intelligent people can use this link, which tells you to turn left at the lookout hut – or right, if you’re coming up the hill.)

Remember:  To walk in a group, as there have been muggings reported on and near the jeep track.

Parking:  At the top of Eustegia Way in Hout Bay.

Post Hike Eating Place:  Ideally this would have been Suikerbossie Restaurant, but they politely told us that they were just about to host a wedding. (It was a little awkies when the entire bridal convoy arrived while we were still standing at the entrance in sweaty hiking gear.) So, we retreated in some haste to Pakalolos for much beer and many burgers.
Highlights of this hike

Feeling smug about finding the *only* spot in the whole Cape Peninsula not afflicted by gale force winds that day.
Clambering over the giant boulders next to the Oudeschip Peninsula and then being sensible enough to stop before we died.
Finding the actual path after trying 57 other non-paths.
Getting close to the Bos 400 wreck and enjoying the sight of hundreds of seabirds perched all over it and dozens of seals swimming around it.
Caryn, our newest hikist, surviving the hike with only a slight limp.

Alison Westwood is a travel writer and hikist.  You can read more of her writing at alisonwestwood.com

Photographs of the Maori Bay and Bos 400 Trail 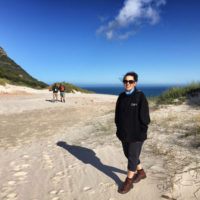 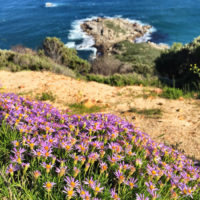 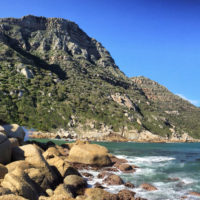 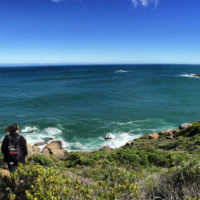 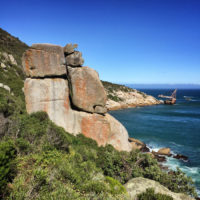 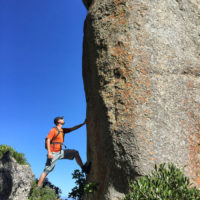 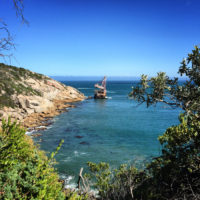 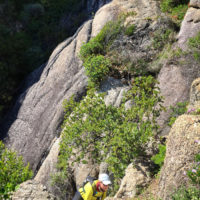 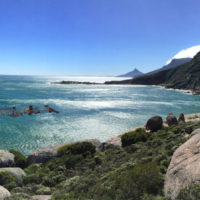 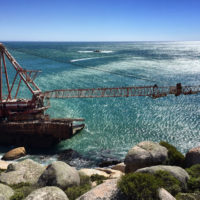 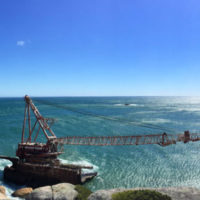 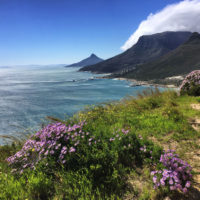 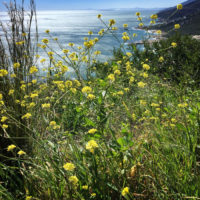 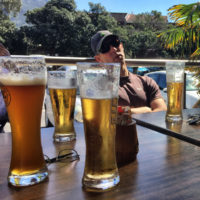