The objective for the day was to repeat Triple Indirect, an amazing composite line which I’d done some months prior.  The Cableway Wall/Magnetic Wall sector is without a doubt one of the highest concentrations of classic routes on TM, bullet-hard quarzitic sandstone in an amazingly exposed aspect.  Brian Watts and I had been chatting for some time regarding our collective climbing goals; lines we wanted to do, areas we’d like to climb – it was our first outing together.  Having discussed the merits of walking up early to be fit verse taking the cable car we decided we’d jump in the cable car and save all our juice for line.

From the top cable station, you make your way around the shoulder of the ridge and either do a short rap off the decommissioned ‘Abseil Africa’ bolts or make your way around and below the front of the station towards town, scamper down the gendarme-y last bit of Arrow final and hook around the corner towards Camps Bay.  The traditional descent from this point involves delicately negotiating your way to the exposed anchors right on the nose – 60m ropes will get you the start of Touch and Go from here in a single rap.

To get to the Dream ledge from here means some down climbing and a slightly spicy traverse followed by easy (but country) scramble. Although TM is a no-go zone in terms of bolting; over the years there have been arrangements made, some formal, some informal and some clandestine (highly contentious, if you ever want to get traddies ruffled up – whip out a drill on TM!) to put in anchors for rappelling and rescue purposes.  Recently we’d heard about an unmarked (i.e. not indicated in Peninsula Select) rap point that could put us straight onto the Dream ledge in one shot from the ledge where The Dream tops out – this ledge is the same level as the airy bolts on the nose and would save us from the shenanigans of the down climb-trav-& scramble as I was accustomed to. 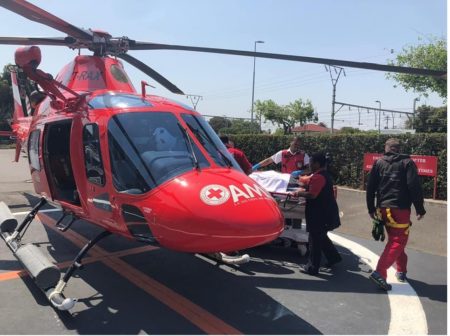 Following the description we’d gotten from another local climber, we found the beautiful glue-ins – whoever the skelm was who put these in knows what’s up – the shiny incarnations of bomberness pervaded a magnetic attraction.  Always exciting to rap of a new point!  We set up the rap using a standard EDK (Euro Death Knot) we both normally use – that’s a well-dressed overhand bend which we backed up with a duplicate on the tails.  Safety knots on both ends of the rope, we each threw down a coil, the ropes seemed to have thrown clean enough.  I set up my standard rappelling system – a 60cm sling girth hitched through the tie in points of my harness (swami belt loop and leg loop) to which I attached my belay device (a tuber/guide ATC). I had a newish 6mm cord clipped directly onto my belay loop with a biner and decided to use an autoblock friction hitch. After setting this up – I pulled up some slack and threaded the tube – locked and loaded. A double check of my own system made me confident of safety before I backed away from the anchors loading the system with my body weight – the friction hitch blocked well – happy chappy. Having done a route called The Dream a couple weeks before I took my time to admire the impeccable rock as I cleared to top headwall, once over the bulge I looked down to see my ropes in space some 2-3m from the Dream ledge.

‘Looks far dude’ I thought, ‘You’ll be fine’ I replied to myself; ‘Okay ja, let’s go’. The ab got airy as I lowered myself through the void, the rock got further and further away as I descended. ‘Sho that ledge looks far bru’, ‘I’ve got this oke just chill, I’m gonna kick myself into a swing and touch down lekker classy’; ‘Righto, you clearly know; whatever..’.

I came to the level of the Dream ledge, with an outstretched toe I was just short of touching a fridge sized block right on the lip, I flipped myself around trying to reach it with my arm – no good. If you’ve ever tried to generate a swing hanging in space you’ll know it’s futile – anyway, I tried that – got nowhere.  The face below slabs out and if I were to descend further I’d get closer to the rock, close enough to start nudging myself into a swing at least. I was essentially at the safety knots but the tails were of a generous length and I figured a quick careful cinch down would get me to where I needed to be.  Delicately, I began to roll the safeties toward their respective tails, my autoblock seemed good and I allowed the rope to flow through.  Not quite close enough, just a little further – I pushed one of the safety knots right to end of the tail.

The mountain started to grow incredibly quickly above me, I was falling fast – I landed on my feet on the bushy ledge some 12 metres below – the bounce catapulted me, winded, through the gulley below.  Not slow-mo, not fast forward – the ledges came at me with a steady silent rhythm which I punctuated with guttural half screams as I connected with various features and flora on my way down.  Dreamlike, I felt an uncanny sense of déjà vu – ‘This is when you fall dude’, ‘This is you falling’, ‘Hope I’m not too wrecked when I stop’, ‘I’ve had enough falling now thanks’, ‘F**k make it stop!  That’s quite enough’.

During the fall I remember the blocks rushing past me, the garbled screaming and the feeling of friction on the rope that was still attached to me.  I plotzed into a pile some 5 meters away from India Venster in the bushes, I gave my fingers and toes a wriggle and seemed to not be paralyzed – lucky boy.
My shoulder felt pretty worked – I gave it a gentle prod with a finger “WOAH!!” not good – my feet were kind of numb and the left had begun to inflate itself.  I was still attached to one of the ropes – it was completely taught, Brian had managed to get a friction hitch on to the top of the rope whilst I was falling – probably saving me from rolling down another tier or more.  Getting the rope out of my device and unclipping the autoblock took every ounce of will and effort – my shoulder screamed at me as I desperately tried to escape the system – after a couple of goes I was off.

Brian was able to get to me in about 20 minutes, he managed to land on the Dream ledge and then set up another rap to get down to my level – as soon as he’d cleared the top headwall we had comms, we chatted a bit as he descended and as he got closer I’d indicated that I thought it best we call WSAR for assistance.  He got to me, made a quick assessment of my condition, I was still able to laugh without too much pain; a comforting sign that’d I’d avoided breaking ribs.  The only apparent bleeding was from a bitten tongue and some scrapes and punctures on my feet.  Brian thought quick and made his way to the Abseil Africa Ground team, managed to borrow a phone from them and called it in (we had both left our phones with our bags).

After about 40 minutes the glorious throbbing of the chopper blades became audible; Matt Young and Brinley Simons dropped down from the hovering SkyMed like angelic commandos.  Between the two of them, Brian and an unsuspecting touring visitor from Argentina or somewhere close (the details allude me) I was slid onto a stretcher, braced up and into a scoop.  Dr. Matt had dolled out some good meds, these brought relief from the  worst of the pain and combined with an overwhelming sense of being safe as I was hoisted up by the SkyMed chopper.  Captain Francois Smit, Jonathan Groenewald and Kyle Jackson all played key roles in getting me stabilized and then to Vincent Palotti.

I’m indebted to all those that helped me; as well as all the WSAR members on standby that day – thank you so much!  Numerous X-rays and CT scans revealed two fractured heel bones and right scapula, unbelievably lucky considering the severity of the fall.  Both heels have been operated on, after a week of waiting for swelling to subside plates were inserted – these will stay in forevs. No operation required for the shoulder.  I’ll spare you the grizzly details of catheterization and bed pans.

Lessons learnt; get proper intel for new rappels, observe potentially problematic situations with a more critical and conservative eye, before changing a bomber set-up explore every option you can think of to solve the current problem you are facing – take your time, the quick fix is normally sub-optimal.  I had plenty of gear on my harness, to ascend the rope or to have re-directed my abseil as I descended.
Take your time! 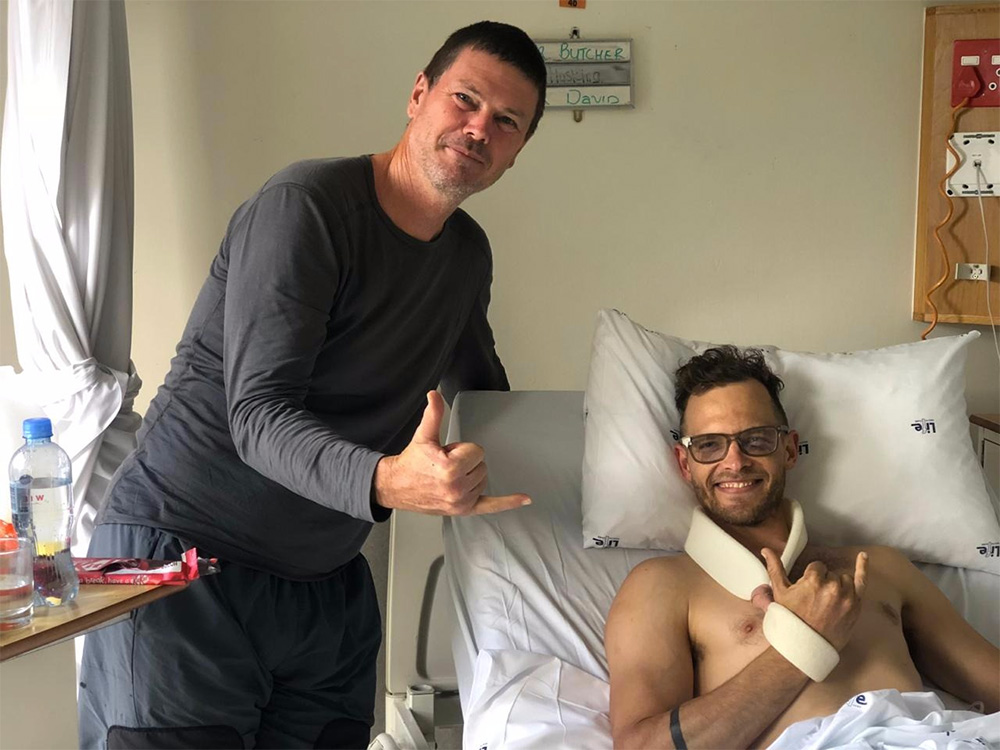 My prognosis – I’m hoping to be on crutches come Christmas, at present load bearing on my feet is a no go.  My Shoulder is recovering quickly and overall pain levels are minimal.

If you ever want to help out I’ll be needing assistance getting from A to B over the next couple months, hit me up on ClimbZA, FB or Whatsapp if you’re up for any of that or if you just want to come hang out.  Recovery is a delicate dance; I’ve been one leg down before so thankfully am prepared to some extent.  The less pressure one puts on oneself to reach certain milestones the better – it’s about celebrating the small victories along the way and focusing on the positives.  Ja it sucks that I can’t walk – but I can breathe, think, speak, write, wash and feed myself, and get around pretty well on my new wheels.  Life is good, be thankful for your mobility and independence – times like this remind me of how amazing it is to be able to get up and go do anything you want, I hope to not take that for granted again.

8 Responses to From Dream to Real