You are here: Home › Rocklands Highline Meet 2019 Report
Posted by Charmaine Kritzinger on May 7, 2019
0

A unique set of circumstances enables this Rocklands Highline classic to happen each year.  Riggers unite and SlackGear galore is packed in the trailer, all ready to roll its way out to the mountains.

Surprised though at how the city’s clutches hold on and won’t let us leave when we like.  Some of the crew were delayed by about a day, but it seems the very nature of slackllning is to move with instability under the feet, and embrace wobbles.  A go-with-the-flow attitude to life helps a lot.  Tricky then to stick to fixed plans, but with most of us dedicated to arrive a few days ahead of the event, we had enough hands to prepare in remarkable time. 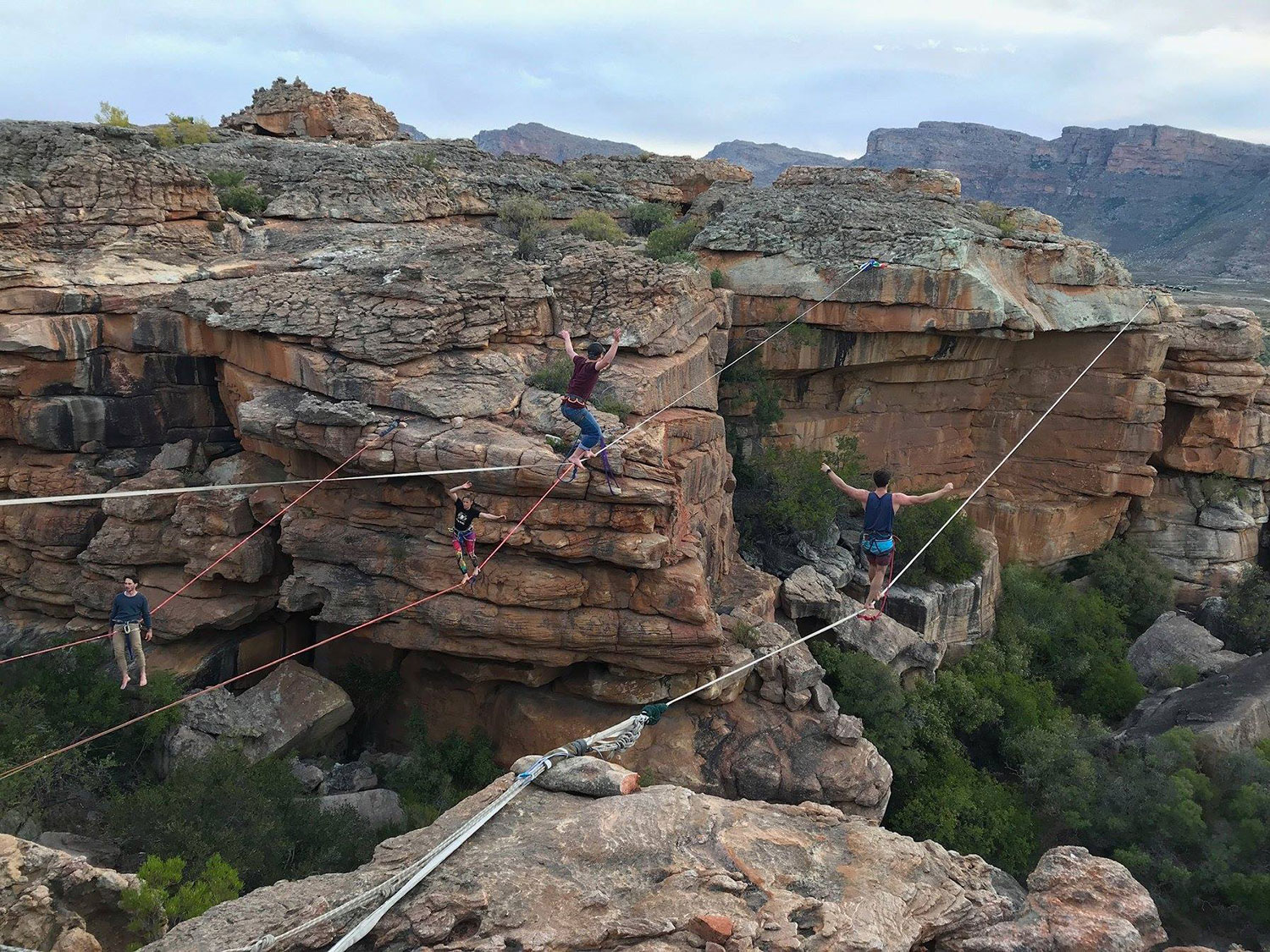 Within 24 hours from Wednesday to Thursday, we had 5 highlines rigged and a SpaceNet suspended 3m above the Pakhuys dam.  Wednesday afternoon saw the first two 20m highlines up, Thursday morning, the next 3 more complicated, longer ones, and Thursday afternoon, Burghen’s sophisticated hang-frames lifted the SpaceNet out the water, over the dam, for sunset pow-wows!

Friday morning, the camp area was rigged, with Andy and Tara warming up for the day’s activities with a little AcroYoga.  A Chongo’ing line set up, slanted from higher to lower to accommodate shorter vs taller people, a rodeo line for shock value, and a variety of other closer-to-land lines.  Stellies Ryan set up his own 35m SlackGear kit, much appreciated, thanks!

The real early birds enjoyed a peaceful Friday morning highline session.  Cary and Azino spent the entire day at the highlines, which might be a first in the event’s history.  All of us encouraged by their psyche extreme!  Most highliners hike up and down twice a day, with a swim and lunch in between, or to fit in a climbing mission too!  Not Cary, determined to make the most of his time highlining. 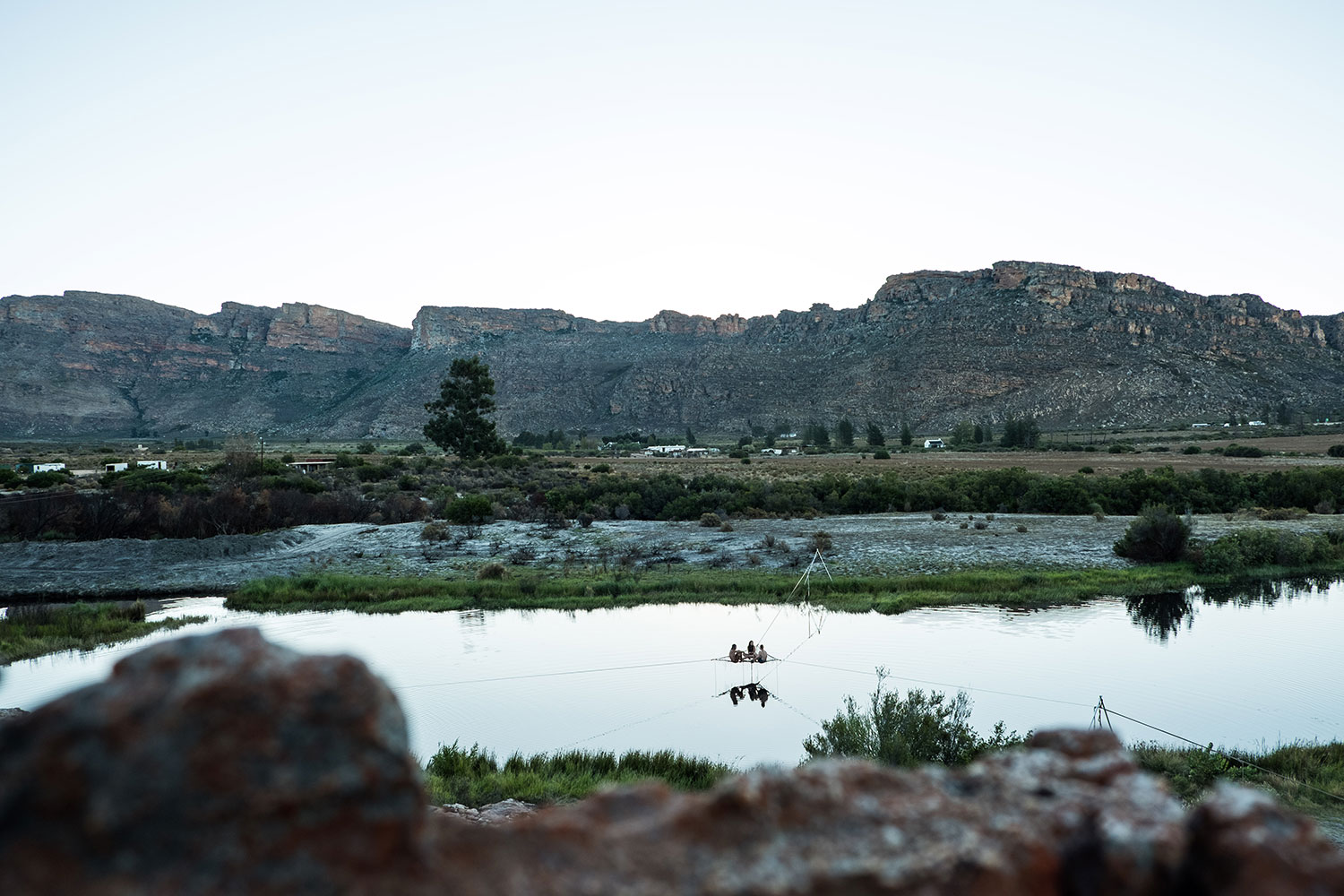 Taping, taping and more taping, on over 350m of webbing.  Superstar Tara measuring perfect tape lengths, and Lowry jumping in to learn about sliders, best so the backup doesn’t stick to the mainline, for different tensions.  So much willing help up at the highline deck.

Then with a first throw tagline ticked, it set the scene for the rigging, as smoothly as that.  Ladies taking the lead on the deck anchors; Cary, Burghen, Azino on the island side.

Next morning, Andy Court arrived with Rich and the colorful SpaceNet, also Sean aka Yeti, and Seb&Michelle joining to offer help.  More taping of lines, then a slide across String Theory, to carefully walk the longer webbing lengths the rest of the way to the Rock Garden anchor.

Tensioning done, a leash added late in true highline traditions, a combination of sliding X, cascading, and natural anchors for the variety of lines up. 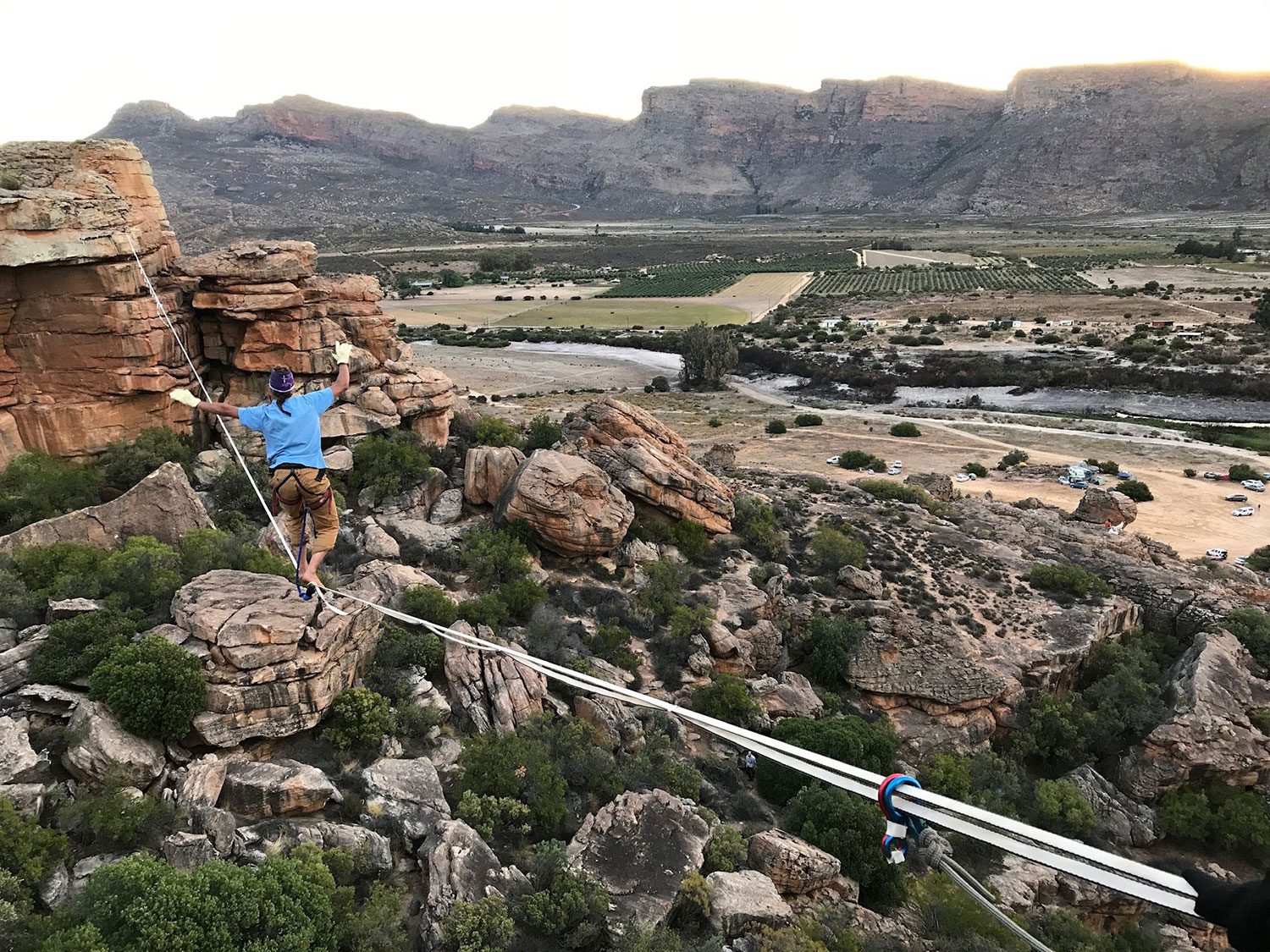 It was time to test the lines.  Excitable Cary was jittery on the 20m, although managing a big first step on the 65m, whoohoo!!  Seb got the 20m first send of the weekend.  Cara from Alpha took a buggy out on a 20m, then headed to the Burnlands. Highlines ready and waiting!

Special arrivals from far and wide:
Swart Martin, from Joburg, bringing with two French climber chicas.
Tom Torne from Namibia two days driving for two days highlining. Nothing like this up there.
Dan Fourie for his first highlining monumentals, with a friend, Mark.
Tom & Stephanie from the US, where the highlining scene is so much bigger, this first experience in Rocklands, braving a tuck and roll leash fall.
Marele&Charl roadtripping with Lennie and his doggles on the GS.
Piotr&Beata 6th year attending, Donna too, bringing surfer Lyndon on a highline initiation.
The Naude’s in their beloved cabin, El Corazon.
Zoe Duby with a confused little Bino!
Jason K&Megan sharing in the action.
Birthdays celebs at the event for Margaux, and also one of the original crew, Leighton.
Ruth&Mike, Alette with her granddaughter of six years, all hike up to witness our sickness. 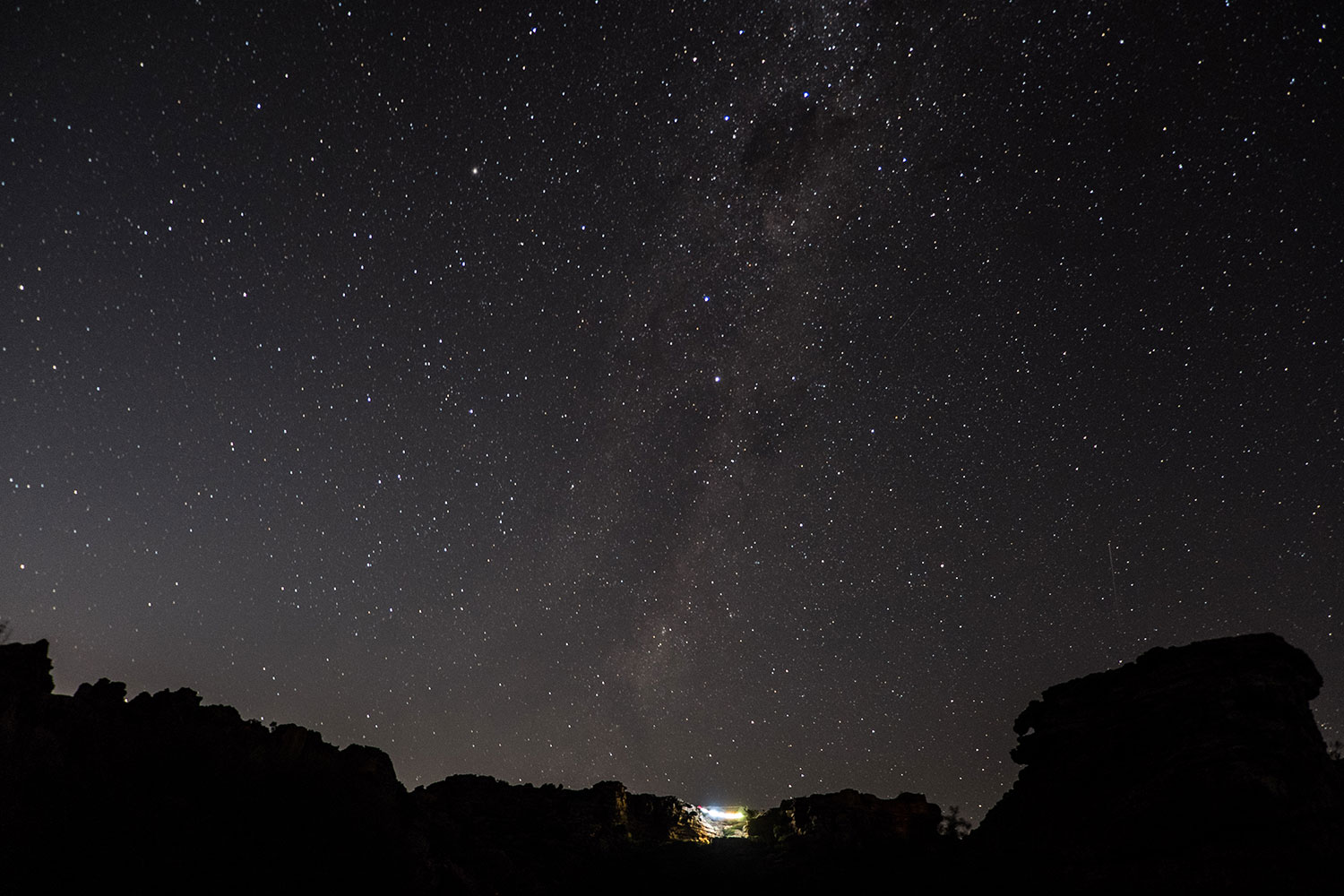 The lapa bar proved to be super festive this year, filled to the brim with familiar-faces, mostly South Africans at this time of year, getting up to all sorts of antics.  A poker table, rumours of strip poker at odd times, and stretchy beer-bottle games, which got girls climbing all over guys, then guys climbing over other guys, for maximum reach effects.  Tallest wins of course, but the girls add the style card.

Easter Sunday, Hedi&Ernest share their traditional egg art with the littlelies from farms in Rocklands.  Emily, Maya, and Mika came over to the campsite for the heart-melting moments.

The SpaceNet dam sessions brought out the Hangdrums, under the trees, along the banks, for the surreal sounds floating over the water. Rob, Andy and Burghen doing a simul-walk across the three wings of the net, rigged on double Great White for extra bounce value. A backflip, a 4person tower, and plenty of air time gave this meeting a super fun factor. The NightLining session was on the cards for one night of the meet, thinking Saturday, but true to form of a day’s delay, it happened on Sunday evening. James C arrived with the gennie, Andy soldered the LED strips he had gathered for the event, and after a big effort with secretive rigging, a countdown commenced after dark: 3,2,1, lights!

Nightliners strolled across the abyss, some dressed in unicorn/nahwall suits.  Fairy Mish gave us a sky poi performance, hypnotic against the starlit backdrop.  A brave couple bugg’ied out together for a romantic cuddle’n kiss.

Oh geez, how does this all happen? Magical Rocklands inspiring us to all add our bit always.

One highlight one of the days was Cary attempting a shoulder stand on the 65m.
Another was Andy C Full-Manning the 65m after a 2 year gap, and his Personal Best Exposure Turn to a lengthly song of a few minutes.
Sean D and Mary sending 20m lines. Tom Torne’s and Azino’s first stands. Ryan, Isabel, Oan, David Court, and plenty others getting thrills out there.
Daniel Kirkman and Seb giving the 40m good burns.
Rob sending the 45m, Zanzibar and Human Energy in a weekend.  Awake till 1am sometimes, because this is what it takes, or was that in the bar? Haha.

A 2 hour derig on Monday, with all hands still on deck, saw the end of the lines for the Rocklands Highline 2019 event.
Good call, Andy! Hope to see everyone up there next edition. 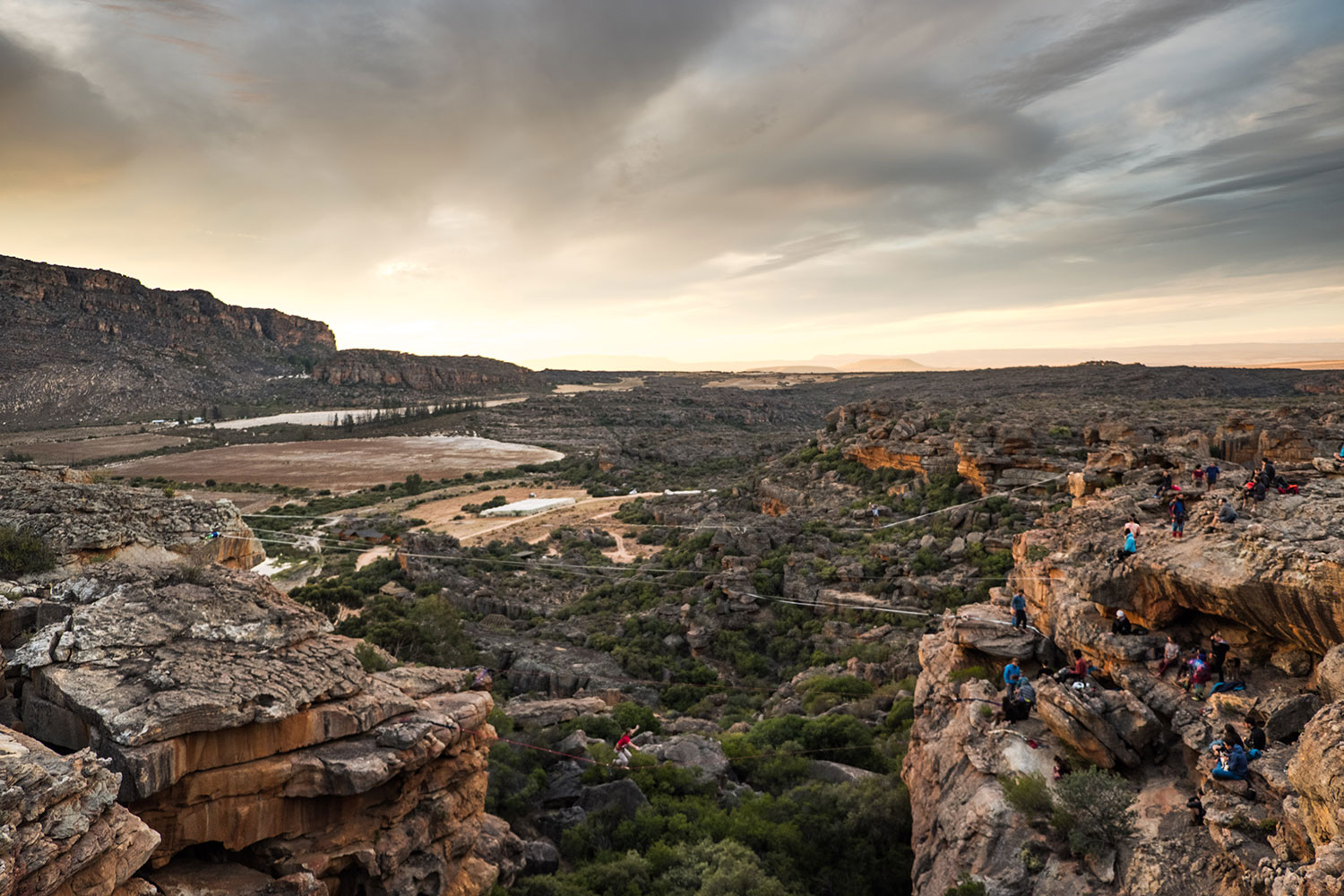