ONLY TO BE USED AT YOUR OWN RISK!

Exposure in F Major is a uber classic route that most trad climbers in Cape Town have indulged a taste in adventure.

The Witteberg hosts two other stellar outings on the same wall Firecracker & Thunderbolt Direct.  Andy has climbed all 3 routes while Teo has climbed two.  On September 28th 2019 Andy & Teo simul climbed up Exposure in +-3 hours then went on to build a new abseil line which takes the climber straight back to the bags and tea spot at the base of pitch 1.

As one arrives at the top of Exposures route there is the first very obvious ledge which is now known as the ‘Ant Hall Walk off ledge’.
Refer to descent beta on ClimbZA.  A large cairn has been built on its left side and it is used to traverse below an avoidable series of scrambles on the top section of the Witteberg.

On arrival of the ledge there is a thread through anchor with a cairn to symbolise the first abseil.
[2x 60m half ropes are compulsory]

Abseil #1: 55m (It is recommended to move the knot of your ropes past the first rocky edge and lay the rope to the right of an obvious shrub.)

Abseil #2: 60m (It is recommended to tie stopper knots on the ends your ropes, the lines reach comfortably to the stance)

Abseil #3: 50m (This abseil flies you over the obvious roof system of Thunderbolt Direct & requires a kick off the wall with a gentle swing to gain the anchor of the next abseil)

Abseil #4: 60m (You will arrive on a vegetated ledge with large pillar of rock. Traverse along the ledge for 20m towards the top of pitch 1 of Exposure.)

Abseil #5: 25m (The final abseil is a wrapped boulder & can be done with a single rope. Arrive comfortably back at your bags and tea. Continue your descent by following the cairns carefully placed for convenience, don’t forget to smell the fynbos on the way down) 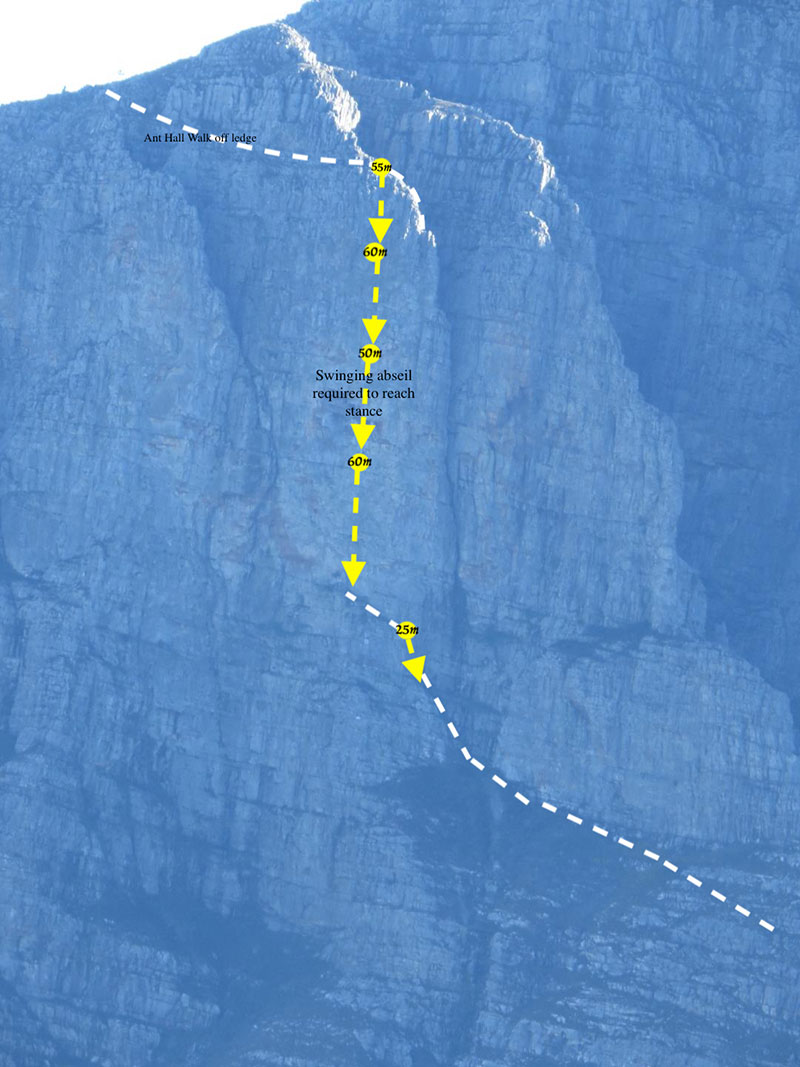 2 Responses to New Abseil Line on the Witteberg