Fortunately water polo had nothing to do with it and neither did a 16 year old stamping her feet at evil adults for stealing her dreams but there is certainly plenty of History that led to Ben Louw a mere 19 years old stamping his authority on my mistress. After more than a decade and some 20 interludes with her, aka Yellowwoood amphitheatre I, with a lot of help from some of my old friends and a host of NBF’s, seduced her this weekend and Time Bomb went down (or is that up.)

On Saturday, while Willem and Squeaks (the older on average team at age 41) sneaked up on her upper three cracks from the Halfway Ledge, Ben and I climbed ground up with Ben making short shrift of the 2nd grade 23 pitch and the gorgeous grade 24 pitch while also hauling a heavy bag behind us. Alarmingly, due to heat and hauling, Ben started cramping a little on the 24 pitch and I thought she was again going to get the better of me/us.

The weather was hot and dehydrating but occasional cloud that lasted not long cooled us from time to time. After a leisurely lunch for R&R at the Halfway ledge hoping for more cloud Ben did a fine flash of the pitch off the halfway ledge and graded it 26 despite the chalk marking the crux holds. I only deigned it necessary to enforce some gear beta apropos the advice of Hector Pringle considering his (relative) inexperience. I was stoked by his efforts and also gave it my all and at last managed to free the first reach move to the rail and then after a little scouting managed to do the next impossible- for-short-people-unless-brutally-strong-which-I-am-not move by lay-backing, as Illona had figured out a week ago. Interestingly the lay-back moves involve attaining a higher smaller hold than the tall person’s version but it just works well enough for me to do the move. Unlike many climbers (and tennis players) that cannot control their emotions shrieks and grunts I uncharacteristically whooped with satisfaction. I can now grade the route 26 A1 as opposed to 24 A1 for the likes of me. Last time I climbed 26 must be more than 5 years ago……

Ben then led the next 23 pitch and I finished off the jam crack that was now in the shade to the anchors at the start of the crux pitch where we met up with Willem and Squeaks. The two of them had done the route from the Halfway Ledge via Smalblaar and Willem had at last freed pitch 5, the 26 pitch off the Halfway Ledge which of course he now would probably grade 22 or so as he knows how to do it. The older pair had tamed the top three pitches (is it trite to note that pitches has a lot in common with spelling of bitches) with little chalk marks at every little crimple and pimple and nipple of finger and toe holds and gear placements.

Willem then had to go so he went down and home while Squeaks, Ben and I had the most awesome evening on the large flat platform on the Halfway ledge. I had even hauled up some charcoal and we revelled in the most beautiful sunset with Boeries and toasted Haloumi cheese, beer and fine malt whisky. The evening was cool and calm – spectacular.

For once my mistress embraced us in her bosom and cuddled us and perhaps she enjoyed me spending the night with her after so many years. For once she was kind and gracious!

But her largesse did not last. The morning was cold and a bit misty, but some hilarious antics by Ben learning to ascend a skinny single rope with a traxion and Grigri warmed us up. My mistress was now frigid, but Squeaks did a fine free lead of the crux pitch with icy toes and fingers and then Ben had a go. The temperature was anything but ideal with cold hands and feet making the moves harder than they needed to be due to insensate toes on the minuscule rock ripples I do not recall ever doing a route on her main wall without her being either too hot and steamy or frigid, sometimes both and more than once on the same day. Alluring, exciting, intimidating and scary! She is all those things, but fickle, capricious and down-right nasty and vile she is too. And me? the willing victim as always.

Ben set off and in true character she maliciously spat him off, not at the crux but just after it, but he then continued up the next half which is 24 proper trad with aplomb. Squeaks and I then yarded up to save time. (There was no way I was going to have any success at taming that part of the route with freezing hands and feet and poked arms from the day before and a 60m free rope ascent on traxions earlier on.) Ben then fine-flashed the next 25 pitch – he is a beast and was taking control! Squeaks finished off the last easier pitch which has yet another reach move and my mistress had to have the last word and spurned me. As Ben had cleaned the gear I was again dangling 280m above the ground away from rock and had to do another rope ascent on traxions for about 10m.

We then abseiled Down Time where the notion of this route started in 2008 when Ged Desforges and I abseiled off a single number 1 rock from the top. Despite wearing down jackets and beanies we only warmed up for the first time when we got to the base around 430pm. It took Ben and I till mid-afternoon do the first 7 pitches or three quarters of the route, but then a full day to do the last 3 pitches or 70m. Go figure!

Part of the logistics of doing a route overnight at Yellowwood is to cycle from the lodge after dropping everyone off and leaving a car there. It is 5km down-hill to the trail head. Ben offered to go ahead, cycle the 5km uphill to fetch the car while Squeaks and I did house-keeping packed up and slowly walked down as Squeaks still has foot fracture ailments. As things happen, I forgot to tell Ben that I had removed the bike saddle and hidden it and also, that the bikes gears were all fucked up. So, the youth had to walk down with big pack, then cycle standing up all the way in the wrong gear to the lodge to fetch the Polo.
He made some comments about it being a little tough but that was it. And he still got back to the pick-up point well ahead of Squeaks and me where we found him rummaging around in the bushes searching for the saddle. It did not strike him to whatsapp me in this regard.

As the saying goes all’s well that ends well but not quite yet. I had not considered that three people with lots of kit and a bike had to fit in a very small VW Polo. But we managed as I squeezed myself into to the Drivers seat, Ben in the passenger and Squeaks contorted himself into the back with the bike and backs.

The Beer at the lodge was cold and delicious.
The drive home was uneventful.
The excitement and enthusiasm and feeling of accomplishment lingers. 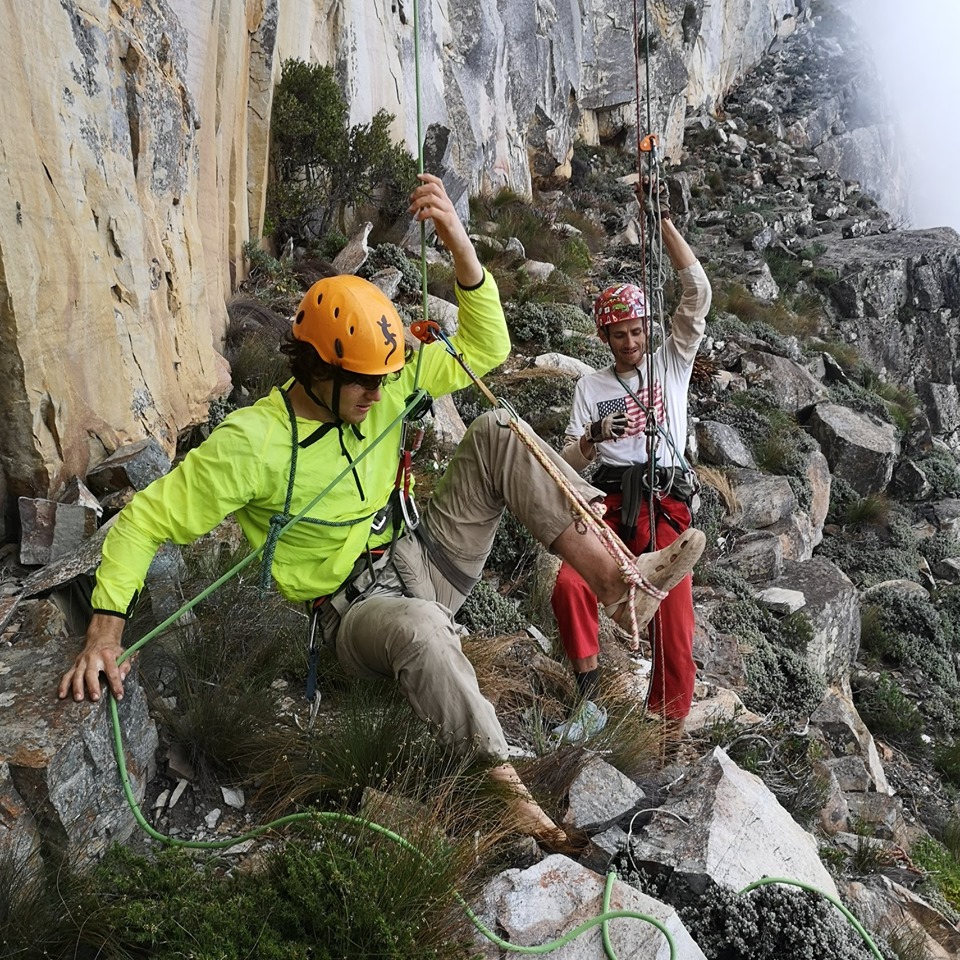 Ben the beast learning rope ascension that hard way. 55m of fighting against gravity on a springy skinny rope. A beautiful sunset after a most successful day taming the shrew, my mistress. — in Yellow Wood Amphitheater. 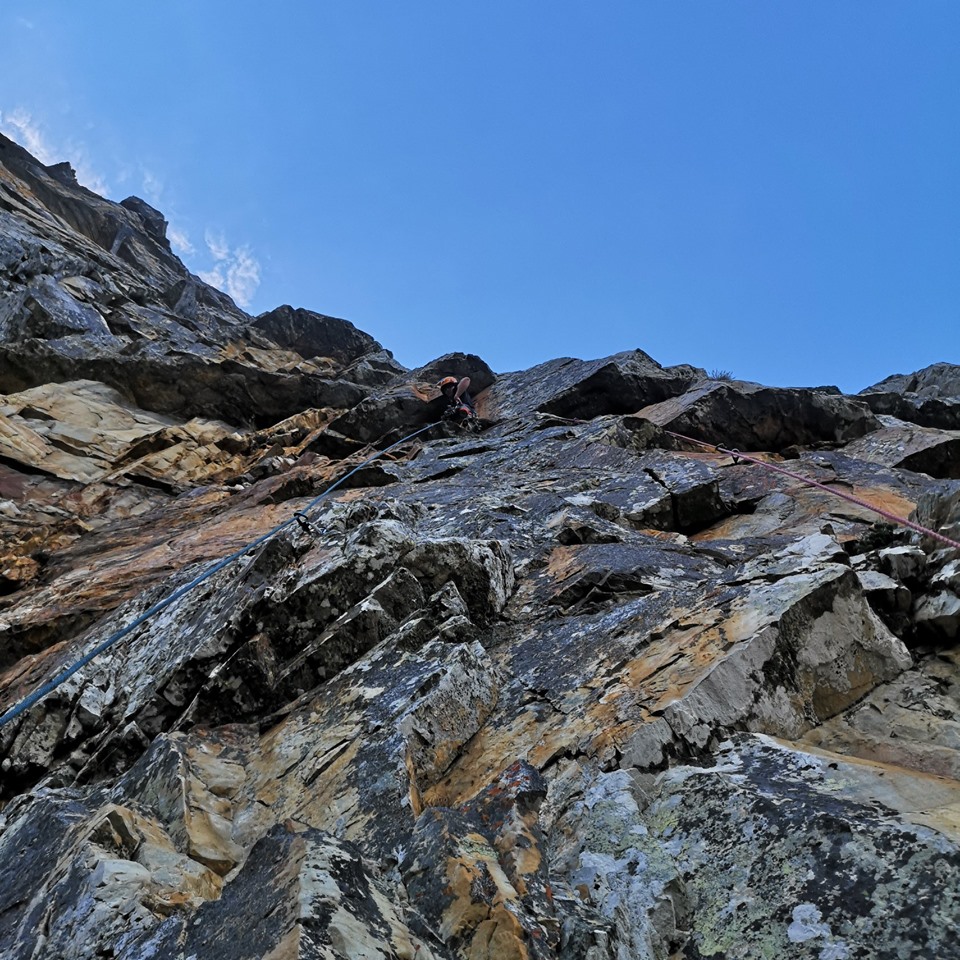 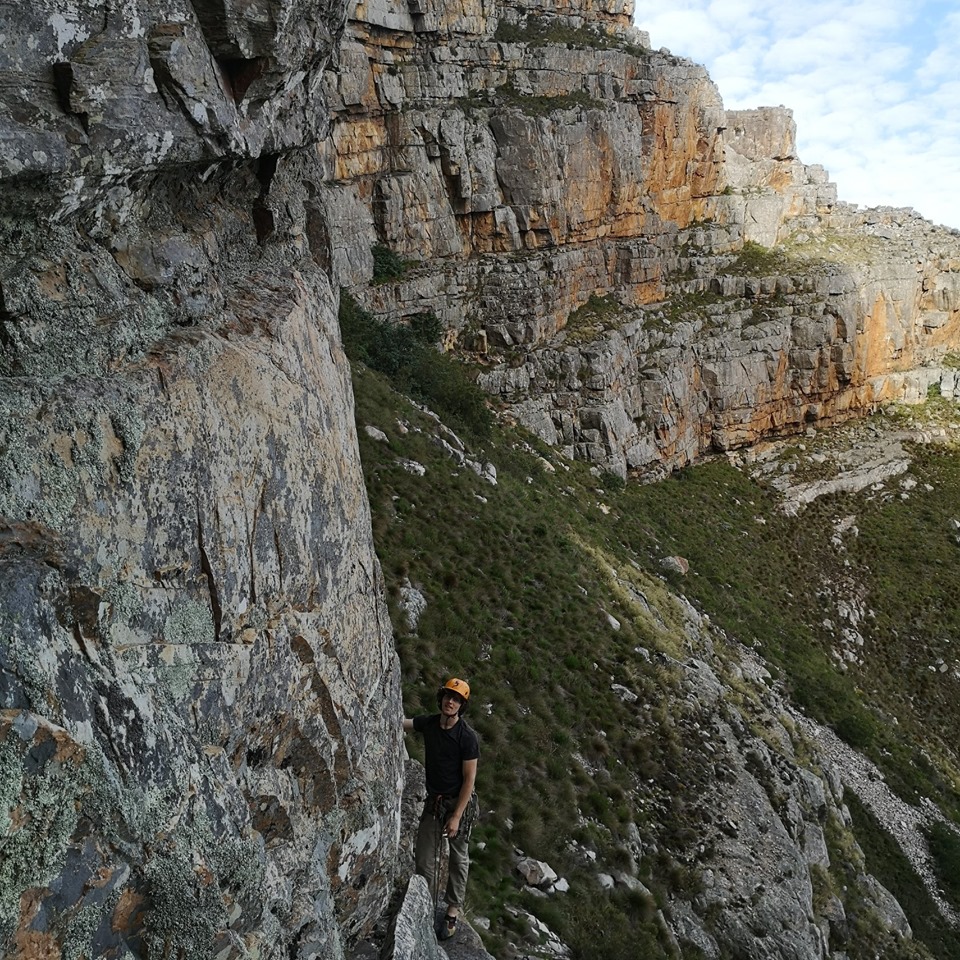 Ben wandering up the first and only “easy” pitch. Already getting warm — in Yellow Wood Amphitheater.