A Journey to Spitzkoppe 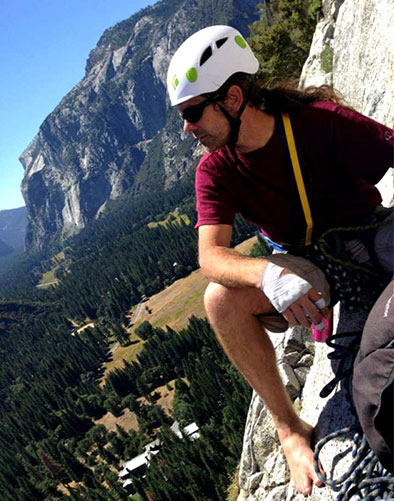 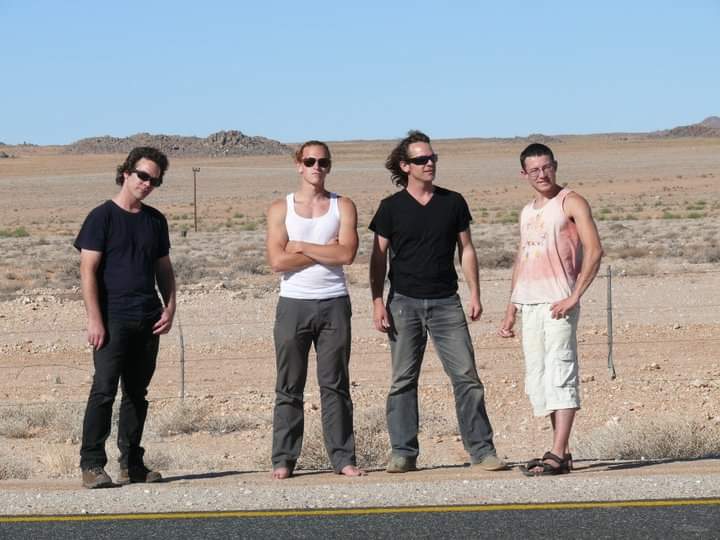 This trip was another one of those that just happens before you know it. The group of misfits in this story are Gaetan Keskispaz from France, Daniel Bressler from the USA, my twin brother Adrian and of course me, both from Cape Town.
I was introduced to Daniel one day and as climbers always do, we started talking about climbing. Cape Town has a plethora of epic climbs, but all can be done rather easily in a day or two. Daniel wanted an epic adventure and so I mentioned a climb I had always wanted to do, Spitzkoppe, also known as the Matterhorn of the desert. He was sold on the idea in about 5 minutes even though we had no vehicle to drive the 1800km up the west coast of South Africa, over the border, and into Namibia where in the middle of nowhere we would find our intended target. 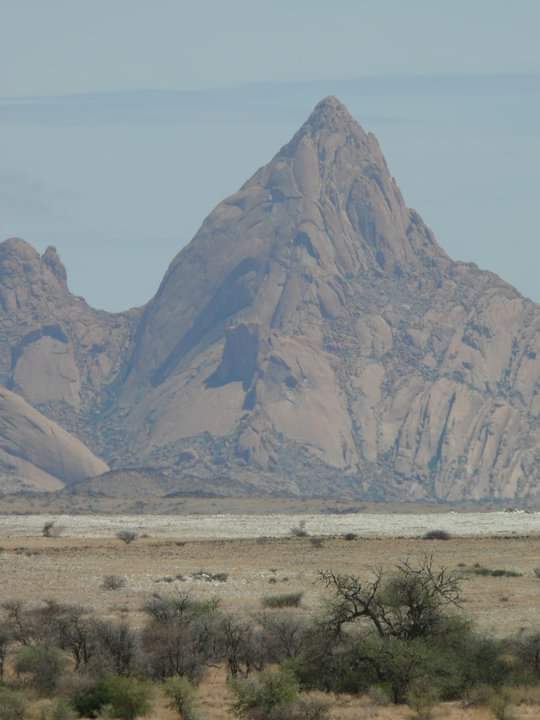 The decision was made to rent a vehicle for this trip and so, to help spread the cost of this adventure, Daniel suggested we bring along Gaetan. The next day we met at Daniel’s place to finalize the plan of action and two days later, all crammed into a small Renault Sondero, we were on our way up the N7 and heading for the border.

Our final stop was in Springbok for the last of our supplies and then after a prolonged negotiation with an irascible border guard to allow us through, due to issues with Gaetan’s passport, we were finally in Namibia. The drive through Namibia was an adventure on it’s own and not one we will soon forget. The road is long and as straight as an arrow for hours on end with only raucous rock music blaring through the speakers to keep you awake. A few stops for fuel were made along the way and after 22 arduous hours we eventually arrived at our destination. 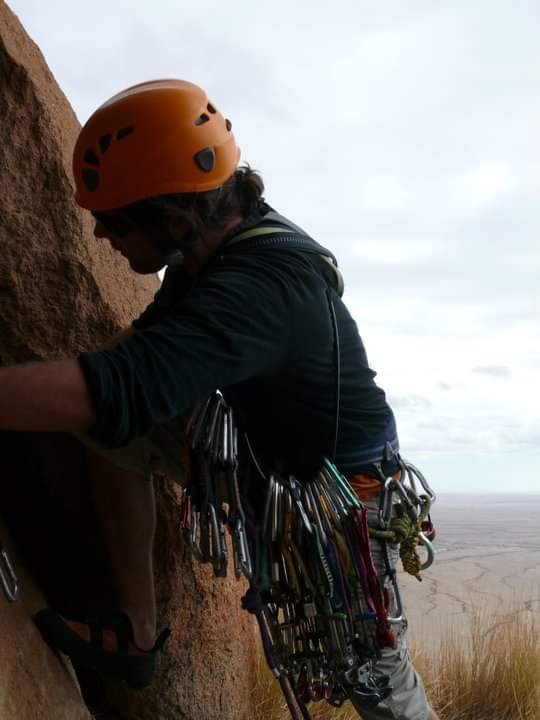 We felt like kids in a candy store when we pulled up to our campsite in boulder valley. It was 9am so we grabbed our climbing gear and proceeded to climb routes on Elephant, Lion and Rhino rocks which were all single pitch sport routes in the 5.8 to 5.10c range. We worked on a few harder routes one can find on Bushman rock before we realized how utterly exhausted we were. Camp was eventually set up and after sorting the gear we sat around the fire under a spectacular sky, eating and drinking till we all crawled into our tents for a well deserved rest. 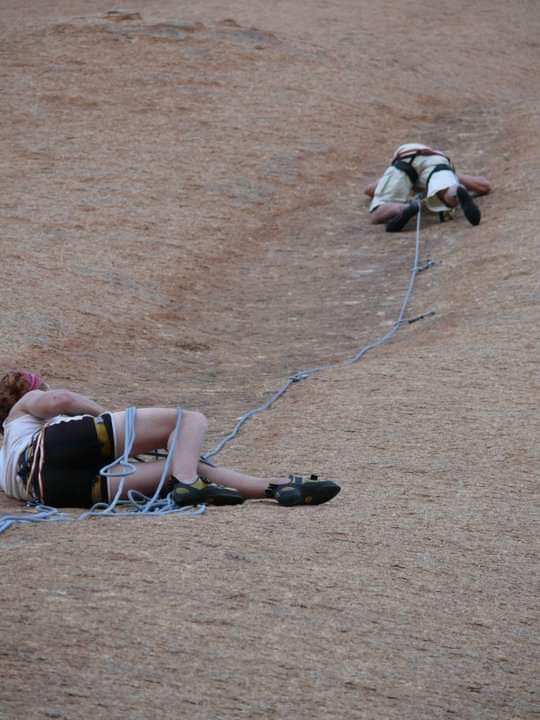 The next morning we packed the gear and started the hike up the north east gully to find the start of the normal route, first climbed in 1946. Although only a 5.8, the route only managed to have its second accent in 1957. The route was said to be so complicated that the discovery of it could only be described as a work of genius. This we soon realized as it took a lot of searching just to locate the start of the approach at the top of the gully. It was at this time that we suddenly realized an electrical storm was almost upon us. Almost immediately, the entire mountain was vibrating.

We could see lightning hitting the nearby Pontocks and quickly getting closer. Spitzkoppe is mostly comprised of granite, but it is riddled with crystals. The energy from the lightning strikes could be felt surging through the rock and then through our bodies. We found a cave to dump the trad gear and extra water, then as fast as was possible, we ran back down to the valley floor. The rest of the day was spent climbing the numerous sport routes available around boulder valley under a sun that felt like it was deliberately trying to fry us alive. 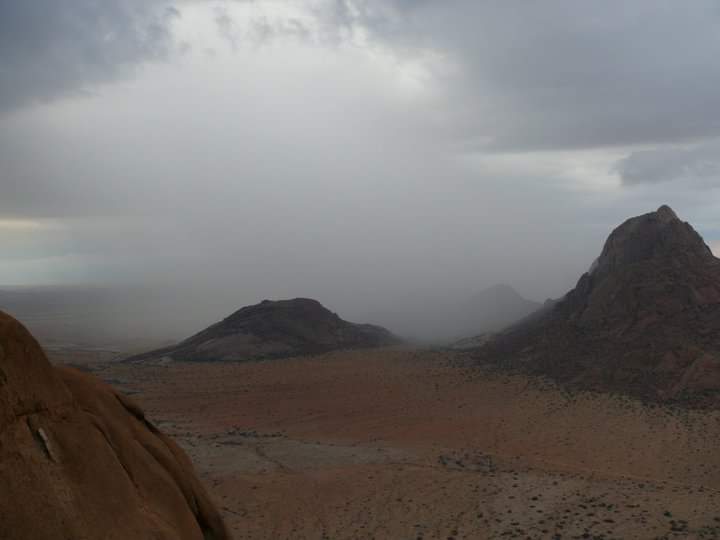 The following day we were surprised to see that the weather had still not cleared. This area only receives about 17mm of annual rainfall which, just as luck would have it, decided to all fall during our visit. It may not seem like a lot, but the granite here is as slippery as soap when it is wet. We balanced the risk / reward factor and came to the unanimous decision to drive to the town of Swakopmund instead where we could indulge in tankards of weissbier at one or more of the German pubs in the old village. We did some supply shopping, had a swim in the ice cold Atlantic ocean to wash off the desert dust and then returned to Spitzkoppe. Tomorrow we climb to the summit.

As we had nearly died of heat exhaustion on our first attempt we were up way before the sun. Having filled ourselves with as much water as we could drink, we once more headed up the NE gully. After collecting the gear we had stashed two days previously we continued our search for the elusive approach to the climb, but just as we found it, as luck would have it, it started raining again. We cowered under a boulder hoping for a gap in the weather, but when it finally arrived, we realized that there would not be enough time to get to the summit and return to the valley before dark. Adrian graciously volunteers to descend and allow the three of us to try and make the climb. 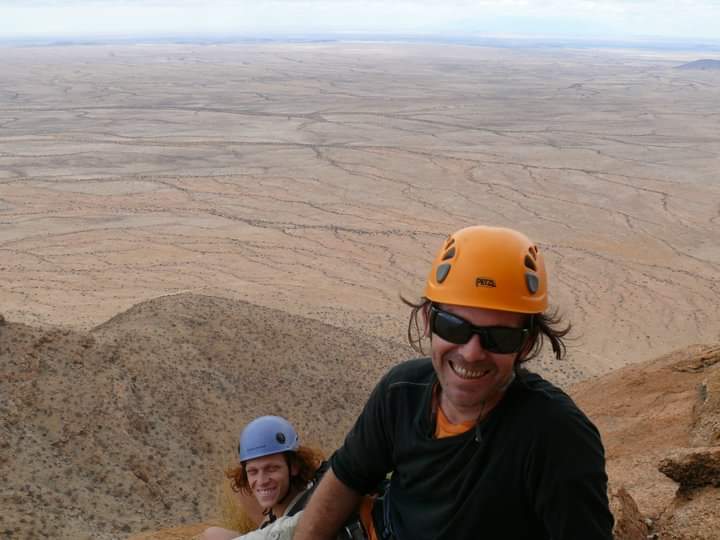 The approach consisted of a short layback pitch followed by a long slog up another gully till you reach an enormous fig tree. Passed the tree is the 3 step chimney and the squeeze through passage which then ends on a north facing ledge where a 15m abseil must be completed to a ledge below. After following this ledge to the west for a few minutes you finally arrive at the start of the climb which is clearly marked by pockets that were chiseled into the granite slab by the first ascenders. The final climb consists of 5 beautiful pitches where the exposure increases at an incredible rate.

Looking down at boulder valley, it is extremely difficult to locate the boulders we previously climbed. On the valley floor they are, to us, the size of houses. From this vantage point they are just pebbles in the sand. After a long day we were finally at the top and we gladly penned our names into the summit book which we found in a metal case, bolted to the rock.
There was a brief moment of happiness to have finally reached the summit, until it started raining again. A search for the abseil anchors began in earnest and then began the decent which brought us, after a few amazing rope lengths, straight back down to the fig tree. The top of the NW gully was reached at sunset and after a terrifying decent, the mountain eventually allowed us to once more step onto the valley floor. We had started the climb in the dark and we ended in the dark, but we were happy to have one more experience that would forever be seared into our memories. 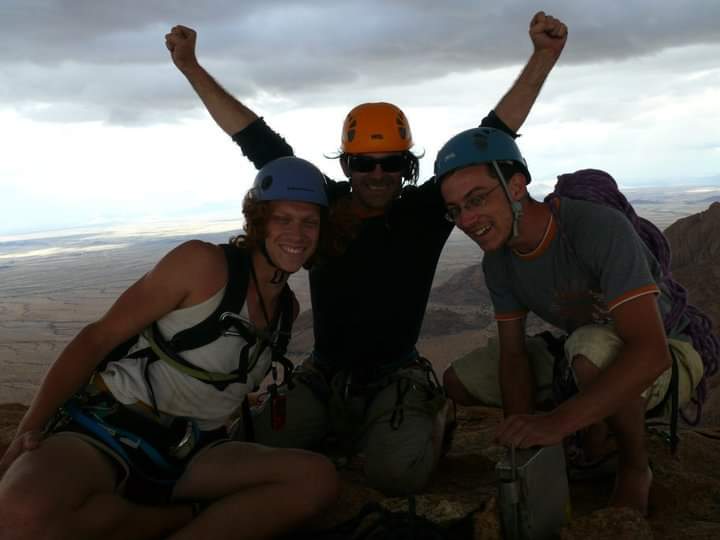 Our final day was spent climbing some more incredible sport routes on the Sugar Loaf of which Rumours of Rain, a 5 pitch 6b, is the most incredible. Climbing continued for the rest of the day on boulders which again seemed so large to us. Dinner that evening was eaten in a hurry because the desert had one more surprise for us…wind. What a frightful night we had. Even with extra rigging we were only just able to keep the tents from blowing away with us in them. The next morning, to our surprise, was the most perfectly clear and beautiful day. Damn you Murphy. We packed up our gear, including the remains of our broken tents, and started the long 20 hour drive back to Cape Town which for some reason always seems to go a lot faster.
These are the adventures that make us love life and all it has to offer.

We went, we climbed and we came back in one piece. Objective accomplished.