You are here: Home › Bolting Information

Please be sure to read our disclaimer.

Bolting has grown up in a rather informal environment. Often climbers wish to bolt or open a route and then proceed to ask their friends how. Knowledge on bolting is dependant on users preferences, budgets and individual skills and savvy. As a result many bolted routes today have bad bolts, some homemade, many very rusted and often badly positioned too.

Alan Jarvis and Joffrey Hyman set about to do some proper testing of different bolt types in different rock types. Many of the previously used bolts were also tested to try and acertain how safe they really are.

The first test results are out. We set out to test bolts, especially U-bolts (staples) in soft sandstone as is found in the Freestate and areas in Kwazulu/Natal. There is a concern about the integrity of the anchors due to the soft/friable nature of the rock. Alan Jarvis & Joffrey Hyman did the testing at Swinburne, south of Harrismith. The rock here is very similar to Mount Everest Crag, Harrismith. To date, routes at Swinburne have been bolted using mainly glued-in Ubolts from various sources. Mnt Everest has both expansion bolts and a few types of U-bolts.

A hydraulic testing machine from UPat was used which was calibrated before the testing. It is equipped with a hydraulic piston and pressure gauge. A testing rig was also manufactured in order to test the bolts in tension, as well as in shear.

At least three tests on each variety of bolt in both tension and shear mode were attemped but due to time, battery, and glue restraints a few instances were not tested. The results do however allow analysis of both the existing bolts and potential others.

Examples of some bad bolts found at Fernkloof in Magaliesberg. Most of these have already been replaced. 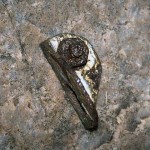 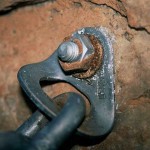 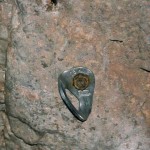