It is essential for first time visitors to do an ascent of one of the existing classic trad routes to appreciate the committing and adventurous nature of the climbing at Yellowwood. Older routes such as Armageddon Time (and the direct), Blood is Sweeter than Honey and Time Warp are all test pieces for their grade. And newer routes such as Prime Time (and the direct) and Fantastic Time as well as "routes in progress" of which there at least 3, are no less demanding at the grade. Most, if not all the trad routes have at least one "R" (run-out) pitch but none are "X" rated. None have bolts. There is only one piece of fixed gear on all these routes (a peg on Blood is Sweeter than Honey) and there are no fixed stances!

Yellowwood Amphitheatre is in Du Toit's Kloof on the Worcester side of the Hugenot Tunnel, approximately an hour's drive from Cape Town. The amphitheatre is on the south side of the road (the N1). (It's on the right hand side if you are coming from Cape Town.) A path winds up the right-hand side of Yellowwood Ravine to reach the foot of the Amphitheatre. The walk-in is steep and takes about two hours. There is a water drip near the base of Yellowwood that is unreliable and seasonal - June to December

Descent: Walk right(looking in) to reach a system of gullies beyond the ridge. Scrambling and two rappells over short vertical sections gives access to a traverse line that leads back left to the bottom of the amphitheatre. 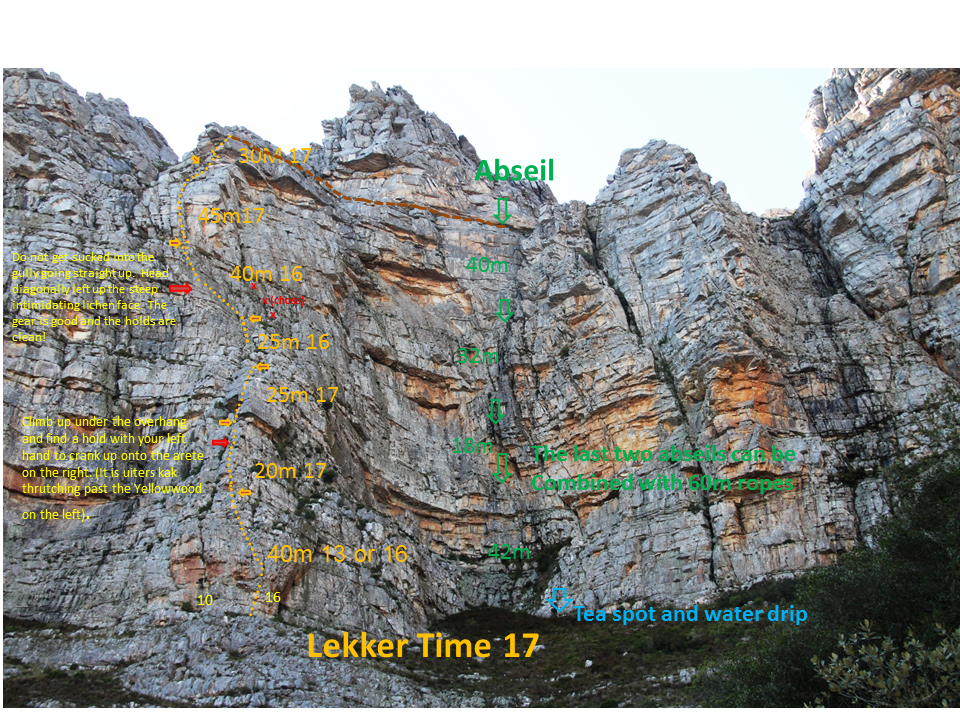 This is the safest and most convenient and the fastest descent whether climbing on the main amphitheatre or the east buttresses. It brings you straight to the water point.

It helps to have a print out of the photo and the RD. Before climbing a route have a good look at the "lie of the land".

If topping out on the main amphitheatre head left (east) towards Worcester for about 10 minutes down past the first depression that is the end-point of Yellowwood crack and then head north (back to the cliff) to the gully at the lowest point. You will find cairns of stones leading you into the gully.

The first point is a thread at the top of the 5th (22) pitch of Timerity. As you come down the gulley you will find yourself on the right end of a long ledge system under a long overhang. Look straight down to see a grey square block and find the thread. The first take-off is a bit awkward as there is no ledge to stand on.

Descent is an elegant and relatively safe 3 or 4 abseils depending on whether you have 50m or 60m ropes.

Down Time is an atmospheric exciting descent that is best to do with someone who has done it.

This is now defunct as the Timerity descent is better. It is still in place in case there are multiple parties needing to get down as it is also relatively safe and almost as quick as Timerity.

It has been recently improved to include another thread point which makes the rope handling easier especially in high wind. It also allows for less strenuous pulling down of the rope. It is on the west facing aspect of the Tea Time Buttress 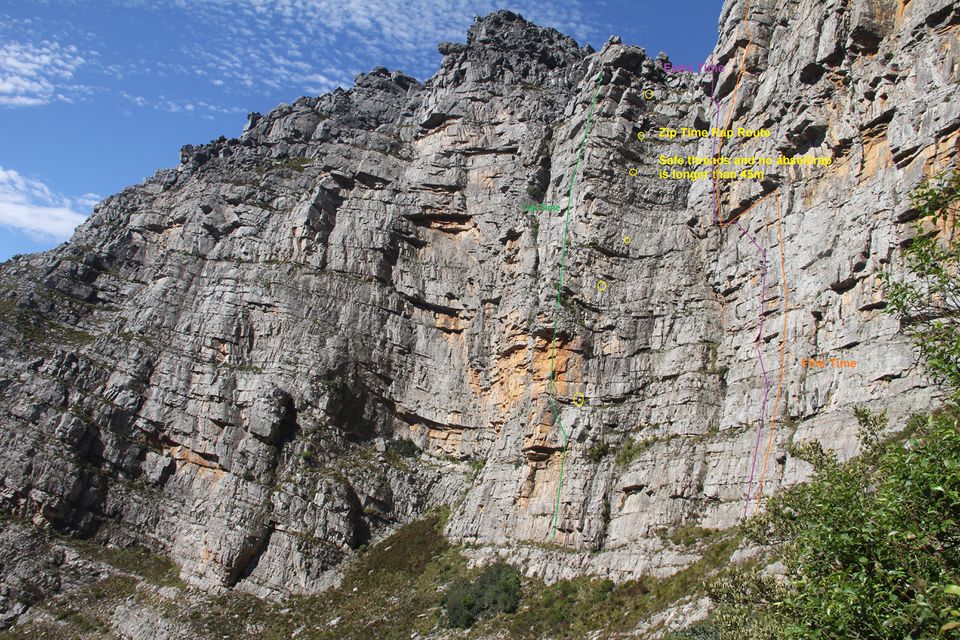 4. Gully between Smallblaar ridge and the Chess pieces 60+minutes

Walk right to the gulley between Smalblaar ridge and the Chess Pieces. This involves three short abseils. At the bottom of the gully follow a feint trail more or less horizontally heading north east (towards the highway) to round the ridge below the "Gendarme" and continue back to the base of the amphitheatre.

This category has only the following subcategory.

The following 25 pages are in this category, out of 25 total.