N.B. THIS GUIDE IS VERY MUCH A WORK IN PROGRESS. PLEASE BEAR WITH US AS WE UPDATE THE INFORMATION 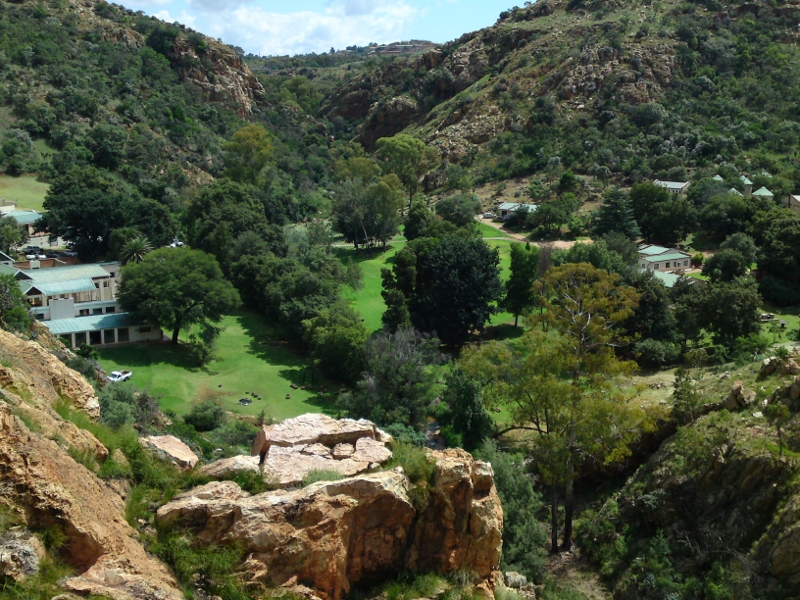 A view of King's Kloof looking South, taken from the top of the North East sector. The camps of Rocky Valley and Achterbergh can be seen on the right and left respectively.

Quartzite with marked variations in colour and texture. A friable shale layer lies under the quartzite and is very visible just North East of the crags along the river. Some areas, particularly the NW sector, have a very ‘alpine’ feel with unpleasant falls awaiting the unwary belayer. The very uneven terrain can be disorienting. Please consider using the belay safety bolts (painted black) provided at the start of some climbs.

60 metre rope and up to 12 quickdraws. So far there are 5x25m climbs and one link-up of 31m, in addition to many shorter lines. Extra slings and screwgates may be useful for use with the belay safety bolts. Climbs are equipped with the finest stainless steel hangers made in SA, attached by Hilti HSA-R M10x68mm stainless steel bolts, for your climbing pleasure! 8mm Maillons rated at 15kN are used at anchors and/or rated galvanized chain. Many hangers are painted to lessen environmental impact, more will be painted over time.

King’s Kloof lies in the Chancliff district of Krugersdorp

From Krugersdorp: Leave Krugersdorp taking Paardekraal Road NE. Take the exit for Robert Broom Drive and left (uphill) at RBD. Turn first right into Clifford Road and second left into Edward Road. Drive all the way to the brick wall ahead and follow the road next to it which takes you to the Achterbergh gate. Continue (slowly) down to the bridge.

From everywhere else: Get to the big 4-way robot at the SW end of the Pretoria Highway (N14 meets M47 {Hendrik Potgeiter} meets R28). Large Sasol garage on corner. Go up the long hill towards Krugersdorp (R28) and take the exit for Robert Broom Drive and left onto RBD. Turn first right into Clifford Road and second left into Edward Road. Drive all the way to the brick wall ahead and follow the road next to it which takes you to the Achterbergh gate. Continue (slowly) down to the bridge.

Go over the bridge and parking is immediately on the right as you come over the bridge. Try not to park further down the field than the obvious climbing information sign. 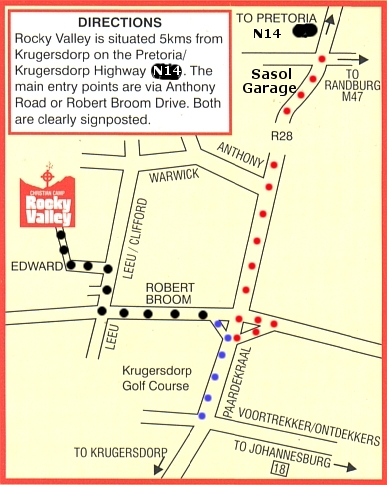 On arrival, please book in with Derek Schneider, the manager of the Rocky Valley camp (083 326 8618). He lives in the house on the left nearest the bridge. Pay R30 per person and sign the indemnity form. If you cannot find Derek the indemnity form is in a grey metal box on a post next to the house. Sign in, put your money in the tin and please be honest! Your money goes to the landowners who have been kind enough to open this area up to us.

Accommodation is available by contacting Derek Schneider at Rocky Valley (083 326 8618), or Betsie Slippers at Achterbergh (011 954 5533). There is no camping or bivouacing allowed.

Route names are followed by the consensus grade and (number of bolts + two anchors). Thus you will know how many quickdraws you need to climb the route and you can choose an appropriate belay method at the anchors. ‘S’ indicates that a safety bolt has been provided on the climb. Routes are described left to right. Comments on grades, etc are welcomed at http://www.climb.co.za/forum/ under ‘Area Updates and New Routes’. Be nice, we’ve done our best!

The climbing is divided into four areas: Kings Kloof NW, NE, SW and SE. The river runs downstream pretty much northwards so the arrangement of the areas should be obvious. There is a prominent sign along the path to King’s Kloof NW which shows the climbing areas. Currently the most developed area is NW, with routes appearing at NE and soon some harder routes at SE. Watch this guide for updates. 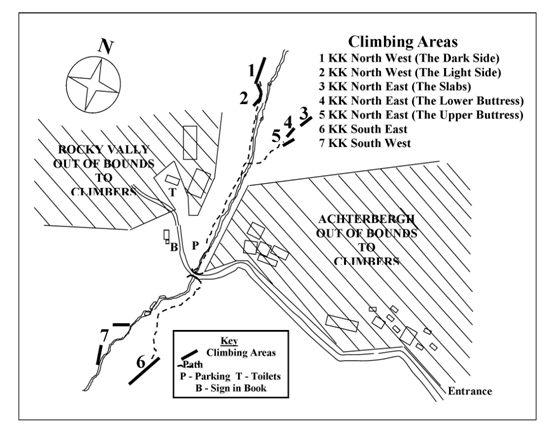 Access has been granted through negotiation with the two religious organisations who own the land. There must be no alcohol at the crag and names of new routes must have respectful Christian connotations. Remember: the Lord giveth, the Lord taketh away (Job 1:21) so please heed these conditions. Please read ‘Crag Rules’.

In order to make sure we always have access to this crag, the following rules must be adhered to when visiting the area.

From the parking area take the path upstream

South East, from left to right:

11. Project - through the big roof

From the parking area take the path downstream until you can see a rising rock ramp with the obvious chain scramble at the top.

Care with rope management, drag, sharp edges, top-roping and pendulums – so that’s about everything, really!

River face: pass to the right of the rock ramp, taking the path to a steep and broken face.

DAMNATION (15M) 17* [?B+A]
Traverse left to the roof, over this and back right to the anchors. The start can be wet in Summer. First Ascent: Neil Margetts June 2010.

Main faces: Approach up the rock ramp to the chain scramble

There are at least three lines to the left as you ascend the ramp. They are essentially highball boulder problems which will probably be bolted due to the very bad landing. There are anchors. Please take care with top-roping here so as not to swing out and send passers-by to their doom!

Open Project – not yet bolted

Open Project – not yet bolted

The next two routes start just before the chain scramble:

EVE VARIATION (25M) 18** [9B+A] S
The left start to Adam’s Rib, starting up the steep crack and block at 18, then joining the main route. Rope drag may be a problem when lowering off. First Ascent: David Tapp June 2010

And, above the chain scramble:

STAIRWAY TO HEAVEN (10M) 15*** [5B+A] S
Start at the sentry box and traverse right across the wall, to exit up the roof-capped corner.. First Ascent: David Tapp June 2010

ZACHARIAS' TREE (5M) 19* [4B+A]
This climbs the short blank face behind the tree. To get the grade, climb just right of the bolt line. Left is easier. . First Ascent: David Tapp June 2010

DRAGON SLAYERS (12M) 15 [5B+A] No star rating yet Start as for CFD, on the block. Traverse left and up the wall to curve back right to the anchors. First ascent: Neil Margetts January 2011

Variation 19 No star rating yet
Climb the left face only, not using the blocks/jugs in the corner nor the right wall of the corner. First ascent: Neil Margetts January 2011

The next routes to the right are found on the Dark Side Buttress with the large and prominent overhang:

HELLFIRE (15M) 23*** [7B+A] S
Bridge up the wide crack and move right onto the wall. Difficult moves over the overhang lead to a finish back left. First ascent: Neil Margetts November 2010. Bolted by David Tapp

TURN OR BURN (17M) 23**** [6B+A] S
Start 4m to the right of Hellfire. Climb up and over the overhang, then boldly up the headwall to the anchors. First Ascent: Wesley Black September 2010

ARMAGEDDON (23M) 19*** [7B+A] S
Starts 1m right of ToB at a vertical crack. The route crosses WoS at half height to finish 2m right of it. Climb up the thin crack until one can traverse right, crossing WoS. Climb up to a small ledge. Continue above the ledge on steep rock to a recess in the roofs above, and the anchors. First Ascent: Neil Margetts, September 2010. Bolted by David Tapp.

THE WAGES OF SIN (20M) 22**** [6B+A]
Starts just right of Armageddon, crosses it at half height and finishes 2m to its left. Traverse right under a bulge using obvious underclings and up to easier ground. Continue straight up to a large rail near a prominent, diamond-shaped white block. From here climb straight through the roofs directly above exiting left at the top to the anchors. First Ascent: Neil Margetts December 2010

GOLGOTHA (25M) 18**** [10B+A]
Technical lower section leads to a slab and a step left across the abyss. Exposed finish (17) up the overhangs. Note: Having clipped the bolt past the slab, unclip the slab bolt to lessen rope drag. First Ascent: David Tapp June 2010

THE FOURTH BEAST (7M) 18 [?B+A]
Start 3m left of TFH. Move up on large holds and left across a slab. Strenuous moves with fingery holds lead to a groove. Up this to the anchors. First ascent: George Stainton January 2011. Bolted by Neil Margetts.

VARIATION 15 No star rating yet
Move up on large holds as for the main climb. Continue up and traverse left into the groove on good holds. First ascent?

THE FOUR HORSEMEN (25M) 12*** [8B+A]
Start in a crack and corner feature at the left end of easy slabs. Climb up and over the bulge just right of the bolts, then up the slab, trending left until under the overhangs. Climb the groove above, to the anchors. First ascent: Taryn Van Olden December 2010. Bolted by David Tapp.

VARIATION 15
An alternative start which takes the off-balance groove/crack on the left of the first bolt. First ascent: David Tapp February 2011.

CRUCIFIXION(15m) 21*** [7B+A]
This climb is way right of the last one but the cave it's in is an obvious feature. Start just left of the bigger cave on the far right of the crag. Move up (with difficulty if short) to an off-balance rest and then do a series of strenuous moves right to get established on the headwall. Climb the headwall trending left to the chains. First ascent Neil Margetts Feb 2011

Directly across the river from KK NW. Approach this buttress along the Rocky Valley path from the car park and cross the river via stepping stones among the eucalypts. The next two climbs can be run together as a 31m outing. A 60m rope will allow an average-weight climber to get down on rope stretch. Tie a knot in the end of the rope just in case!

THREE WISE MEN (20M) 15 No star rating yet [?B+A]
Lower tier, starting at a shield-shaped bulge just left of the middle of the main face. Climb up and over the bulge into a small recess and easier climbing. Scramble to anchors. First Ascent: David Tapp February 2011.

ANGEL OF MERCY (11M) 17 No star rating yet [?B+A]
Upper tier – continuation of TWM - Scramble slightly left until below a balancy face. Climb this to a short traverse left and up steeply left to the anchors on the left side of the overhang. Use 60m rope if lowering to the ground. First Ascent: David Tapp February 2011.

Again, the next two climbs can be run together as a 30m pitch, though you’ll fall a long way on rope stretch if you come off at the top of SITW. Don’t hit the platform! A 60m rope will allow an average-weight climber to get down on rope stretch. Tie a knot in the end of the rope just in case!

NARROW IS THE GATE (22M) 13 No star rating yet [?B,A]
Lower tier. Start 4m right of TWM. Follow the bolts as they wander right and left to the platform under SITW. First ascent: David Tapp February 2011

STRAIGHT IS THE WAY (8M) 19/20? No star rating yet [?B,A]
Upper tier. From the large platform between upper and lower tiers climb the prominent z-crack and traverse left to the chains. All praise to the first ascensionist (name?) who climbed this line on trad gear in the 1970s. Bolted by David Tapp Feb 2011.