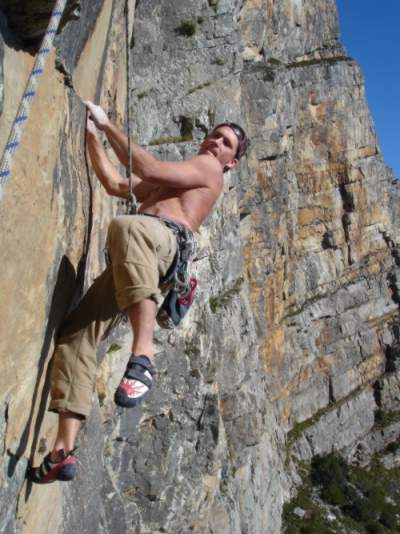 Jeremy Samson starting off on the third pitch of New Born

New Born is the only sport route at Yellowwood. It was bolted by Sean Maasch in the late 1990's. Jeremy Samson added more bolts in 2007 and opened the route in 2009.

The route is in the sun from about 11h30, although the pitches capped by the big roofs above the halfway ledge are shady until later. It gets really hot once the sun hits. Rock quality is generally excellent. The route does not see much traffic, so expect the occasional hollow flake or precariously balanced rock. Cracks get overgrown in winter.

All stances have bolted belays. Most pitches finish on comfortable ledges. Bolts are spaced on easy ground, but close when the climbing gets harder. The first two pitches can be combined to save time. No pitch is longer than 35m, most are much shorter.

A 60m sport rope and 18 draws are needed to climb and descend Newborn. Half ropes work well for parties of three. It allows for hauling a bag and makes it easier to get down (see below).


PITCH 1 (18): Easy climbing over gentle ground. Watch out for loose rock.
PITCH 2 (19): Short, easy pitch. Can be combined with the first.
PITCH 3 (25): Thin crux section, then easy climbing to a ledge.
PITCH 4 (24): Short pitch with sustained, technical climbing to a hanging belay.
PITCH 5 (26/7): Traverse right from the stance to skirt the first roof. Blast past two overlaps and up a delicate corner to the stance. Pack's a punch.
PITCH 6 (27): Tricky face climbing leads to an open book and easier ground. The start is hard for shorties.
HALFWAY LEDGE
PITCH 7 (22): Awkward scramble over bad rock. Comfortable, shady stance.
PITCH 8 (27/8): Superb pitch with a very long reach at the crux. Ends in an uncomfortable hanging stance.
PITCH 9 (24): Sustained climbing past the big roof. Stunning, shady stance.
PITCH 10 (22): Short, easy pitch that ends at a semi-hanging belay.
PITCH 11 (27/8): Revenge of the shorties. Super technical.
PITCH 12 (25): Climb up left to clip the poorly placed bolt above the overlap. Then come back down and pass the overlap by heading diagonally up and right (crux). Scramble to the top and belay from a single bolt.