Rocklands is found in the Cederberg mountains 250km/3 hours north of Cape Town. It is a very beautiful area in a semi-desert setting, very isolated and very safe. Rocklands is undoubtedly famous for it's world class bouldering but this should not deter you from sampling the fine sport climbing. There is a large variety of quality climbing of all grades in both bouldering and sport climbing. All the sport routes are single pitch and you will have to do a small amount of walking to get to the different areas. Most of the original climbing is situated on CapeNature land and thus day or week permits must be obtained. Permits for bouldering are not covered by Wild Cards. Many of the newer areas being developed are on private farms some which have small (30-40 rand) day fees. The rock is a fine grain sandstone of medium hardness, excellent for climbing on due to its varied features. It is quite rough so you will surely need to plan rest days to re-grow some skin.

The latest Rocklands Bouldering Guide is out and available (click the image below to purchase). 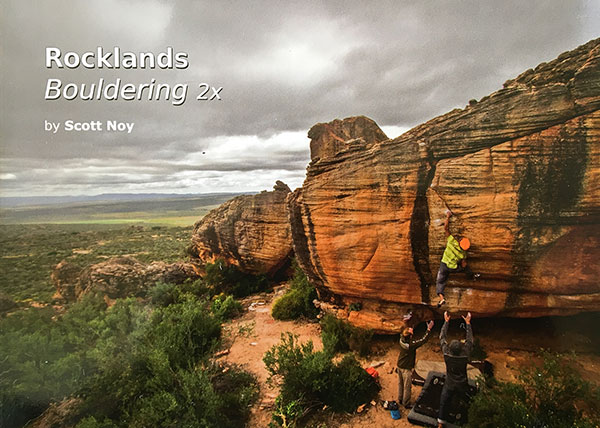 From Cape Town, get onto the N1 towards Paarl, take the N7 turnoff towards Malmesbury. Follow the N7 north for roughly 200km, eventually you come across a large dam after which you take the R364 turnoff towards Clanwilliam. Turn right at the T-junction and continue straight passed the town and up a small pass reaching a dirt road which is followed for about 16km until you hit another tar road. This is followed to the top off the pass where you'll spot a dirt road on the right. Park here and walk...

A car allows one to access the full range of areas in Rocklands. The bouldering is spread out along around 20 km of road. After parking there are generally with a number of clustered different sectors within walking distance of each other. Assuming one could get to the DePakhuys campsite, it would be possible to climb there without a car (300 or so problems within walking distance of the campground), though getting to town for supplies (26km) could be difficult unless other climbers provide transportation.

The Cederberg mountains fall within the Cape Nature Conservation (CNC) and on numerous private properties. Permits must be obtained in order to visit the areas. Permits can be bought via https://www.quicket.co.za/events/4582-rocklands-bouldering-permit/#/

Bouldering/Rock climbing is allowed at the Kliphuis campsite area on condition you stay at CapeNature premises – either the campsite or one of the three cottages. The rest of the area is excluded from these terms and a permit is required.

Extremely hot in summer with sparse rainfall, spring, autumn and winter are the best times to visit the area although winter gets rather cold and often gets rainfall. There are often sudden weather changes so always bring warm clothing even in summer.

The ideal place to stay is the Kliphuis campsite which was recently upgraded and reopened in June 2013. There are three self-catering accommodation units, each sleeps a maximum of eight people. The cottages are fully equipped with bedding, towels and kitchen utensils. The cottages do not have electricity, but are equipped with gas geyser, stove, fridge and solar lights. Please bring your own food, beverages, and toiletries. All cottages have inside fire places and outside braai areas, braai grids are provided.

Kliphuis also has 14 campsites which are suitable for tents and/or caravans, but do not have electricity. Bookings for Kliphuis are done through CapeNature (Phone +27 21 483 0190)

Clanwilliam is the nearest town to resupply and is located about 20 minutes back down the road. It has everything you'll need in terms of camping, internet, restaurants and food but no climbing gear. Beancas currently has three computers for internet (slow but not horribly so)and the the gas station before the Shell has two.

Climbers generally either rent a house/cottage or camp. Most of the campground have cottages available for rent.

Currently, as of August 2008, the camping based climbing scene is centered at De Pakhuys with a large number of international climbers staying here. De Pakhuys (phone 027 482 1468 or 027 482 1879) offers camping and cottages. It is 26km from Clanwilliam on the right after the paved road turns to dirt again, and bouldering area is on the farm. As of August 2008, camping is 40 Rand a night with a discount of 10 Rand if you stay over 7 days. There are flush toilets, hot showers, electricity, a fridge, sinks for dishwashing, a covered communal braai (BBQ) area, firewood, and wi-fi at the campsite. The camping also includes free access to the bouldering areas surrounding the campground, which normally has a fee of 30 Rand for access. Chalk can be purchased here and bouldering mats are for hire.

Alpha Excelsior Guest Farm is also a great alternative. It is down the other side of the pass about 1km from the ending of the tar road. Accommodation consists of self catering cottages (with optional breakfast) at R400 to R600 per cottage per night (April 2006). Contact Connie and Liz at conniedt@worldonline.co.za or phone 027 482 2700.

There are a number of supermarkets and restaurants in Clanwilliam, about 17km away. The supermarkets generally close around 7pm though basic supplies can be purchased at the gas station next to DeKelders until 9pm. There is also a butcher selling fresh meat, biltong and even Ostrich Eggs (feeds 9 people) in town that closes at 5pm.

There are also a couple of restaurants in Clanwilliam with the 'Olifants Huis' (steak & pasta), Beancas (pizza & coffee) and De Kelder (burgers, beer & pizza)being my favorites.

On your rest days you are best off exploring the beautiful surrounds and looking for new boulders. You can drive back to Clanwilliam where there is a nice coffee shop and a dam to swim in on hot days. About 30 minutes away is Lamberts Bay a small town on the coast. Muisbosskerm is an excellent beachside restaurant with NO frills, very traditional and very good.

The Black Shadow area in Rocklands has been closed down due to graffiti on the boulders. MCSA is in communication with Klein Kliphuis and will be working on regaining access to this area via more effective means of keeping it clean and looking after it. In the meantime, we ask that you please do not climb at the Black Shadow area until further notice and kindly inform any other boulderers you meet who are intending to go there who might not be aware of the closure. We appreciate your compliance with the decision of the landowners to close this area for the time being.

For those on the way down the pass toward De Pakhys campsite: 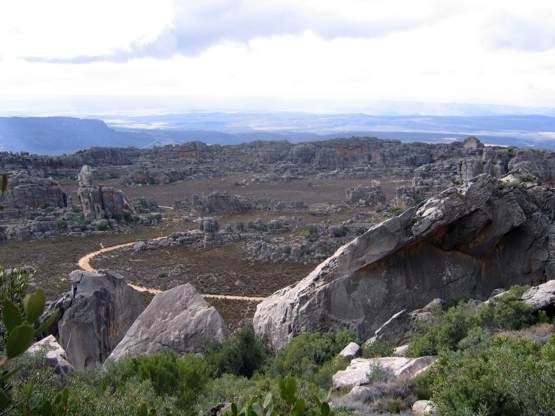 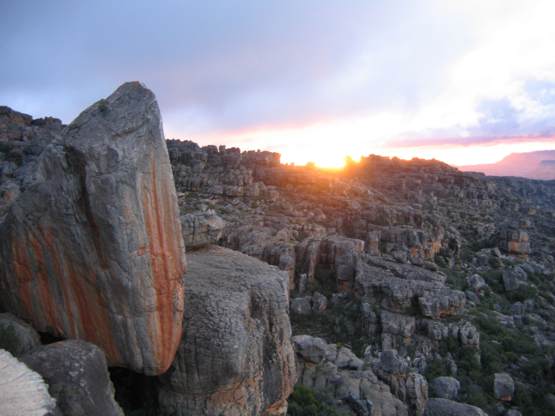 Some of the routes (e.g. Alto Rouge 27 on the Sun Block) have really dodgy bolts. Be careful!


Also check out Rocklands Bouldering & Climbing (https://www.rocklands.africa/) if you are new to Rocklands.

Bolting is allowed at Rocklands however a process needs to be followed - failure to comply to these regulations will result in the area being closed. The procedure to bolt in Rocklands can be found here: http://alewis.its.uct.ac.za/mcsa/rock/manplan.html

The bouldering was first developed by Todd Skinner, Frederic Nicole, Klem Loskott, Scott Milton, and others. The cliffs just off the Pakhuis pass towards Calvinia were the first to be climbed on trad gear in the area. Much later in the early nineties, the sport route Cedar Rouge was opened and all the other sport routes were put up over the next few years.

The area is quite secure but also very remote without a telephone. In emergencies ask the caretaker at the campsite to make a call or drive back towards Clanwilliam and ask to make a call at the Tea Garden on your right a few km from the campsite. At present there is no stretcher or first aid dump in the area. Also note that there is bad cellphone reception at the campsite. For serious accidents call 10177