This is also an MCSA owned kloof and permits should be obtained - see the main page for details. It is part of the Tonquani Complex. Contact the MCSA for more access details.

This is one of the most popular kloofs with almost 150 routes. They are mostly multi-pitch natural routes. These routes see grades from 5 to 25. Many classics can be found here such as Hawk's Eye, Stone Needle and so forth.

There is plenty of water and some impressive pools all surrounded by forests. Climbing is good all year round.

This is the grandest and most scenically attractive kloof in the Magaliesberg. The access traverse above the pools between Upper and Lower Tonquani (C) is over polished rock and is hazardous to inexperienced parties. The upper meet point is below Kitchen Crack. The longest climbs are on the Coffin Buttress (80m). The climbs elsewhere averaging 40-50m. The rock is generally excellent and water is always available. 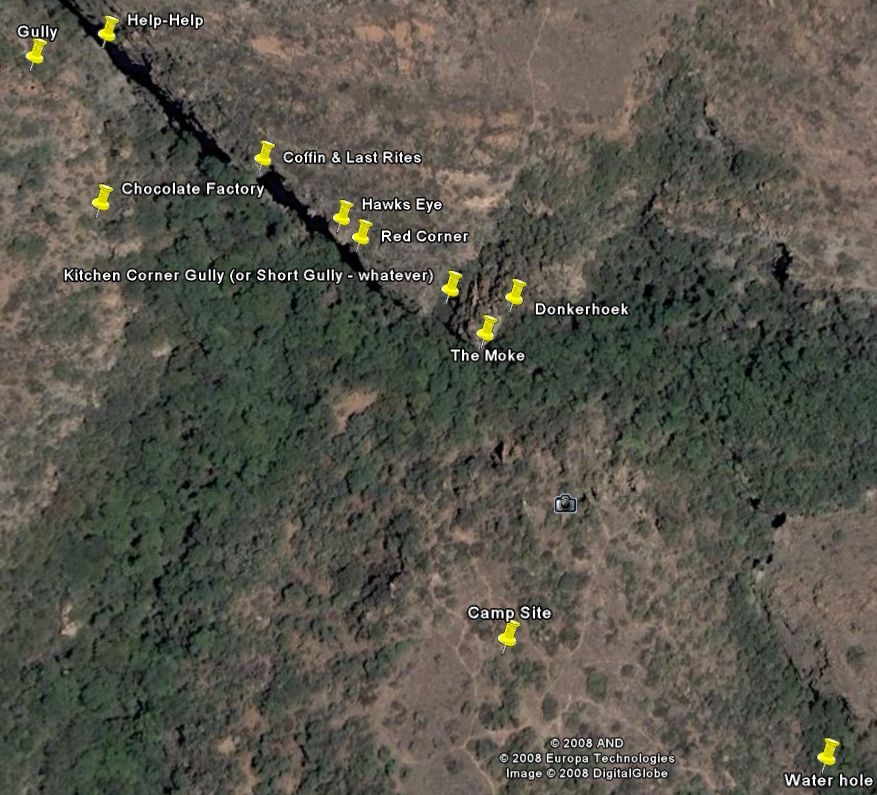 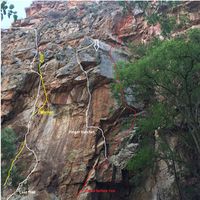 Finger Hatchet 25 **** [N] See topo below. This route shares a start with Blood Before Tea before moving left and up the immaculate face to break through the roofs above.
1. 25, 30m As for Blood Before Tea, climb easy rock to gain a vaguely rightwards trending rib, then step right to a ledge. Move up and left to the obvious rail in the clean wall on the left. Rail 1.5m left then climb the face to the base of a rightward facing corner. Climb this as it gradually steepens and make the hatchet move to exit leftwards to beneath the large square roof. Pull past the left edge of the roof to easy ground and move up and right to rails. Either rap off here (in-situ anchor of two wires and an old peg) or continue straight up grotty aloe-infested rock to the top.
FA: Hector Pringle and Marianne Schwankhart, November 2016.


Blood Before Tea 24 **** [N] See topo below. Sepulchre ascends the grotty chimney on the downstream side of the Coffin buttress. This route climbs the grey slab and steep headwall immediately left of this. From the base of Last Rights walk around beneath Alchemy and scramble down past the base of Sepulchre’s chimney to belay on a ledge in some slabs a few meters above stream level. There is a steep buttress directly above with roofs low down on its right side.
1. 24, 35m Climb the shallow rightward leaning dihedral on the right edge of the buttress until able to step right to a ledge above the roofs. Continue up the dihedral above until able to traverse right then up to reach sloping edges beneath the grey slab. Traverse back left (hands just below the lip of the slab) to a jug around the arête. Climb the blunt arête (crux) to a rail, then step right to the main vertical break in the slab. Climb this then move onto fun edges on the right to gain a rail which slopes down to the left. Rail left to regain the vertical crack to the top of the slab. Belay at the rail beneath the steep headwall.
2. 24, 20m Climb into the headwall and make a wild rising traverse right to the apex of the Sepulchre chimney. Clip the old peg here and finish straight up to a ledge of your choice (there's a good rap tree on the higher ledge – 55m back to the stream).
Note: There was a very old fixed nut at the crux so someone has tried this before.
FA: Hector Pringle and Arnold de Beer, July 2016.
Variation to P1: 21, 35m. After reaching the sloping ledges beneath the slab move right and up and then traverse back left to gain the vertical crack in the slab. FA: Hector Pringle, Marianne Schwankhart and Steve Broccardo, July 2016


Lethal Injection 21 **** [N] Essentially an alternative to the crux pitch of Last Rites. Climb Last Rites to take a semi-hanging stance at the Coffin rail. This is the rail about 4m above the final roof on the 2nd pitch of Last Rites. 1. 21, 20m Step left onto the slab and climb the groove to where it dies. Step left to a pencil crack and climb this to jugs at the left end of the Last Rites crux traverse. Up to belay at the small tree. Notes: 1. Small cams and wires are useful. 2. The route was cleaned and top-roped before being led. FA: Hector Pringle, Bernard Spies and Linda Watson May 2008.

Accipiter’s Edge (aka The Bird of Prey) 23R **** [N] Start directly below the abseil tree to the right of the last pitch of Hawks Eye. Scramble up as per Hawks Eye to about halfway up the leftward sloping ramp. This is just about where the climbing on Hawks Eye starts. There is a reasonable flat ledge here. 1. 23, 30m Climb up in the corner then traverse 2m right to a crack in the face. The crack turns white higher up and curves left under the big roof. Climb the crack and crank leftwards through the roof to a foot ledge on the left. Up the overhanging wall to a rail and wedged prong. Surmount this then slightly left up the technical face to a short dihedral and rail. Place a good small cam and run it out on jugs to the top. Notes: 1. Small cams and wires (especially a good selection of micros) are useful. 2. Runout but gear is solid. 3. The route was cleaned and top-roped before being led. FA: Hector Pringle and Bernard Spies May 2008.

Butcher Bird 24R [N] *** Ascends the wall almost directly beneath the Hawks Eye abseil tree. It is right of Talons and just left of Accipiter. Scramble up to belay from the big platform directly below the abseil tree. 1. 24R, 30m Climb the slab on the left as for Hawks Eye until able to step right to a left facing corner crack beneath the biggest, upper roof. Swing right to the prow above the smaller, lower roof and climb up to the big roof. Suck it up to pull leftwards through the widest part. Stay calm in the recess above because you still have to pull straight up through two overlaps to get to the jugs. Don't screw up the last 10m to the tree. Protection on this route is poor. FA: Hector Pringle 2012/02/05.

Jet Plane 23 [N] ** To the left of Kalahari and about 20m above the river is a ledge with a big block. Directly above this is a short, overhanging wall with a flaring crack. Scramble up to the ledge. Boulder out the steep wall and crack and continue up the easy slab to the tree. Rap off. Fun moves but very short. FA: Hector Pringle, Nicholas Grech-Cumbo, 2012-04-08.