The Brandberg is the highest peak in Namibia and is a large circular scar in the middle of the country. Orabeskopf is a 1200 foot/400 meter granite face on the southern reaches.

Orabeskopf was first climbed by R. Lichman and R. Blumgart, in December 1974, via a central chimney route. After that time, there was one attempt to repeat their route by Roland Graf, aborted due to weather. Roland mentioned the climbing to a group of Americans in May 2009 and they (Majka Burhardt, Peter Doucette, and Kate Rutherford, along with camera man Chris Alstrin) went up to the face to see what other options might exist.

The Brandberg is the seat of thousands of rock art paintings and is about to be a UNESCO World Heritage Site. The Orabeskopf is visited by hikers. Water is the main logistical issues for climbing there, and on the May 2009 climbing trip, Burhardt/Doucette/Rutherford were able to stay a week at the base because of the discovery of water at the base of the cliff—water that was first a sea of mud and algae in a 20-by-40-centimeter granite depression. After cleaning out the muck on day one we were able to collect 14 to 18 litres on our way back to camp. The team spent a total of seven nights on the col between the face and the standard hiking route to the southern side of the Brandberg.

Shown in blue on topo.

Begin by starting up the obvious right leaning ramp until it is possible to traverse directly left into the hanging corner system that forms the route.

Pitch 1: Grade 20, 50m. Traverse left into corner (17, little to no gear) and then follow corner through a series of perched flakes and pillars and onto a bucket seat stance on left wall. Big gear needed for anchor.
Pitch 2: Grade 21, 25m. Continue up the corner in the off-width until a small stance after the crack pinches down.
Pitch 3: Grade 21, 35m. Continue up the hand and finger crack, past a horn and into another crack system above until a break in the right hand wall provides a stance.
Pitch 4: Grade 21, 35m. Follow the clean crack above into a chimney, wrestle out of the chimney into the short over-hanging hand crack above and stop at the large ledge (1 X 3 meters) at the base of the “enduro” corner- which starts with a rightward arching crack.
Pitch 5 and 6: Grade 25 and 24. 75m. The first ascent party did one 45m pitch and then one 30m pitch, stopping at a slight foot rail on the right face. Many of the same cam sizes are needed for these pitches and will dictate your belays. The final belay is in a cave at the base of a wide crack above.
Pitch 7: Grade 26, 20m. Stem up the off-width until it is possible to exit right, and then move back left (2 pins) and into a different crack system where the grade eases considerably.
Pitch 8: Grade 13, 30 m. Continue up the easier ground until you reach the ramp system that cuts the upper face.
Pitches 9-13: These are all much more moderate climbing and involve the leader in the chimney systems or out on the exposed face. Continue up the ramp system until it is possible to cut back left to the summit for the quickest finish.

Descent: Follow the ridge west to the notch between the main face and the sub spires. Allow ample time to route find around large boulders and notches. It helps to spot this descent from the ground before you start climbing. An alternative descent is to descend to the east and then the south, then finally to the west, behind the summit, otherwise known as the hiking route. We determined that the notch was a quicker descent, albeit more technical.

Shown in red on topo. (Done as an accident while the team thought they were repeating Dogbreath)

This route follows the ramp and chimney system just underneath the route first climbed on the cliff. Most pitches were 17 or easier, with one pitch of 18 that can be avoided if you keep heading left and into the higher crack system. The route had a great deal of loose rock, trees, and blocks and is mountaineering/alpine in nature because of these conditions.

Rack: Single set of cams and nuts is sufficient, a light set of doubles would enable you to place more gear.

Shown in yellow on topo.

Please see http://www.waypointnamibia.com for more information as well as a movie about the trip. 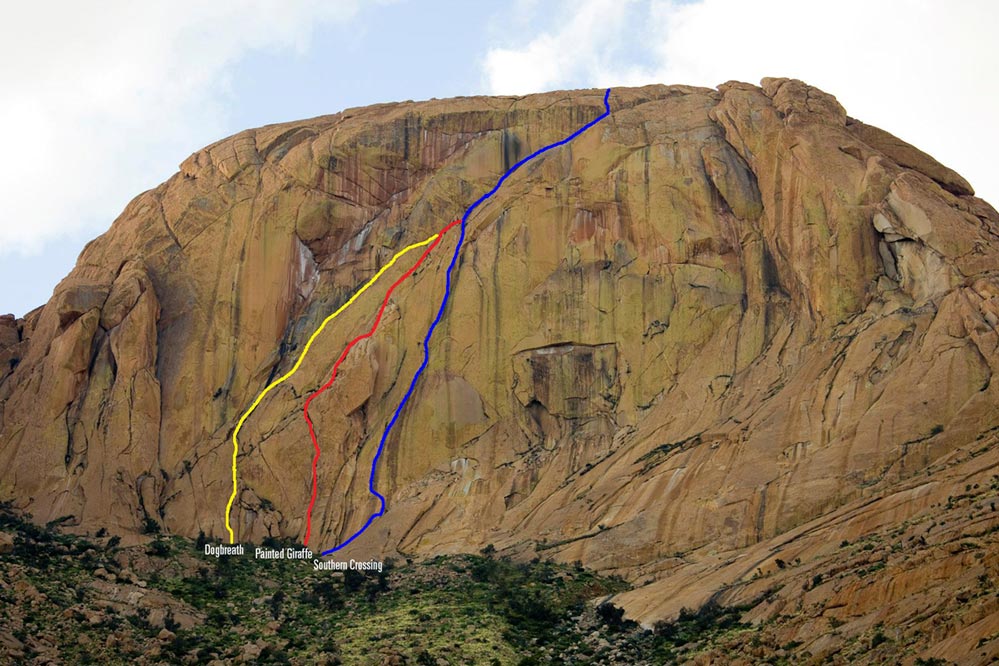