This impressive valley with it's huge sandstone walls contains some great country routes. The only drawback to this area is that in most cases you have to do a long slog up the mountain side to get to the rock. But do not let this fact stop you from exploring this vast and beautiful area. It offers some of the most challenging traditional climbing in South Africa and still has more first ascents waiting for the intrepid climber.

multi-pitch traditional climbing on the 'Du Toits Peak Massif' with +/-38 Routes, the 'Haelhoek Sneeukop Massiff' with +/-17 Routes and the 'Witteberg' which has +/-15 Routes.

2-4 hours depending on where you are going.

Full rack of friends and nuts, long slings useful to avoid rope drag. Rope: 50m /60m - double ropes are recommended. A helmet is also a MUST.

It's country climbing, the less popular routes often have vegetation and other 'stuff' growing, lurking on them. The rock is generally good, although you may come across small patches of not so nice sections.

The climbing in Yellowwood amphitheatre is particularly good Bouldering can be found on the Worcestor side of the tunnel at the end of the pass (just before things get flat - look right to see a large boulder field.

From Cape Town, get onto the N1 towards Paarl, drive past Paarl and you will get within a kilometre of the mountains. You have the choice of taking the tunnel (toll is R18) or driving over the pass which is very scenic. Once on the other side of the mountain, you will come to the Du Toits Kloof Hotel. To get to the MCSA hut: Turn around so you are driving back towards Cape Town and take the road as for the pass, just after you take the turn off is a road leading to the MCSA hut.

There is the Du Toits Kloof Hotel and the MCSA hut. There have been reports of car break-ins at the MCSA hut, so dont leave anything inside your car 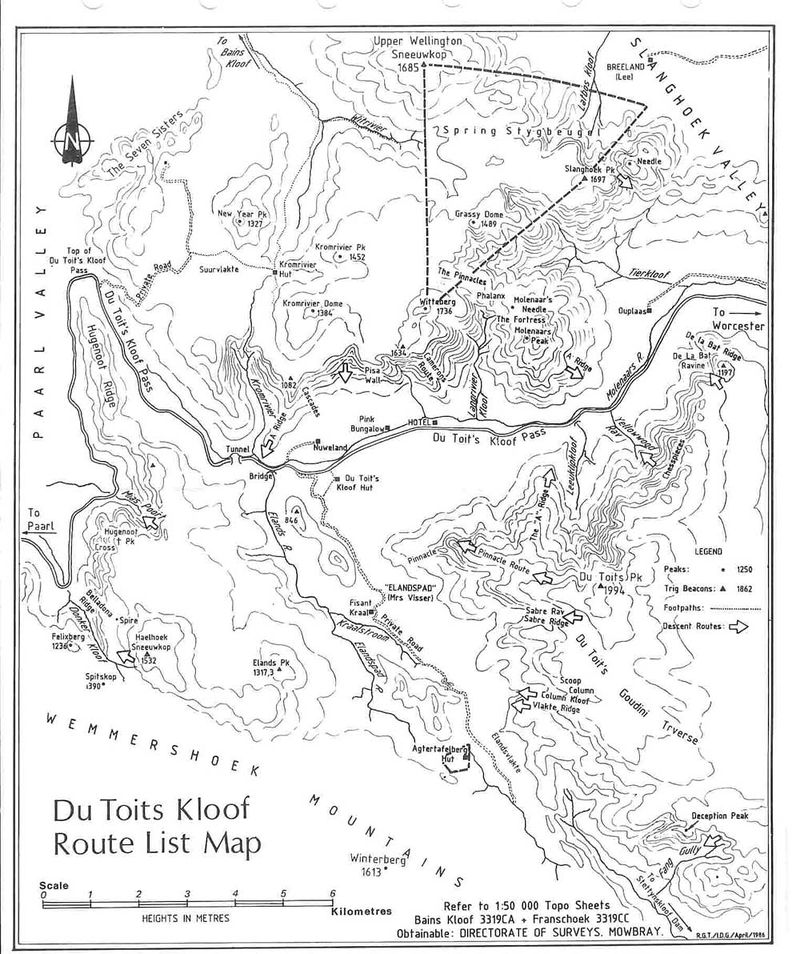 INTRODUCTION TO THE GUIDE BELOW

This guide contains detailed descriptions for a selection of routes in the journals of the Mountin club of south afria up to 1983. This personal selection has been made on the basis of a routes popularity, the fact that it is regarded as a mojor route is merely because it is enjoyable. A complete list of the climbs follows this introduction.

The grade of each route is shown at the top of each description and indicates the overall severity of the climb. It is not an indication of the difficulty of the hardest move on the route. Free pitches are graded from "c" to "h" with the grades "e" to "h" being expanded by numerals 1 to 3. The letter "m" is used to indicate a mechanical (artificial) pitch supplemented by the numerals 0 to 3.

In addition to giving each route an overall grading, to indicate its seriousness, a system of star grading has been included. The star grading is a critical rating of the merit of the climb and its overall enjoyment.

Each description contains details of the approach to the route and the main features mentioned are indicated on the map.

Climbers are dependent on the goodwill of private landowners and the Department of Forestry for access to all the routes in the guide. Their permission must be obtained in advance for the privilege of access. In addition there are certain rules of general behaviour that climbers are expected to adhere to ,viz:

Main access contacts for this year are as follows. Where Forestry permission is required, contact the Hawequas State Forest Office.

The MCSA owns the property in the Du Toits Kloof and Agtertafelberg area for the huts but this gives members rights of access only to the huts. Additionally the MCSA owns a share of the land which includes parts of the Slanghoek, Witteberg and the other peaks but members are still expected to observe the courtesy of to advising the Department of forestry and other landowners that they are in the area.

The following is a (hopefully) complete list of all known climbing routes in the Du Toits Kloof area, together with a reference to the year in which the climb id described in the Journal of the Mountain Club of South Africa. The routes marked with an asterisk appear in this guide book.