Drive out of Montagu into Cogman's Kloof passing the big contorted Cogman's Buttress on your left. Eagle's Folly Buttress appears next, higher up the mountainside. Park and find your way into the stream bed coming down from the buttress. Rock hop your way up and when the stream bed starts getting steep, move out right and zigzag your way up on the right. At the top (you can see over the ridge into Keur Kloof from here) move across left to the base of the buttress.

Eagles Folly was the first rock climbing route in Montagu and is a classic that must be done.

It is called Eagle's Folly because the leader of the opening party had to climb over a nest in the chimney (of the 2nd last pitch) and there was a young bird there and it squawked and squawked and then took off between his legs for what was probably it's first flight..! The nest was still there (abandoned) when he repeated it a few years ago.

Don't underestimate the amount of time to climb this route, parties have been caught out in the dark! On the other hand it has been climbed car to car in 4 hours. The walk up usually takes about 45 min's to 1 hour. An early start is advisable in Summer to avoid the heat. There is no water along the way.

A standard trad rack is required, a #4 Camalot is useful but not necessary. Most pitches are +-50 meters, so 50m ropes are fine.

It is advisable to take a pair of walking shoes on the route for walking down. Long pants are also advisable. The descent is very obvious, once on top, follow your nose to the far side of the mountain and then hang left on easy terrain till you get to the large descent gulley. 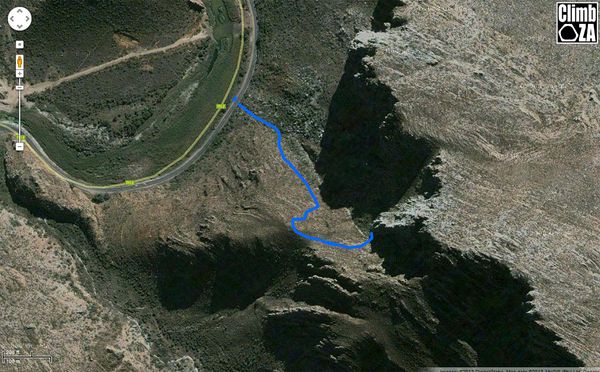 The route follows the prominent central arête leading to the highest point in the area.

P1. 45m 12: Starting in the alcove, climb leftwards up a grey slab, turning the overhang delicately on the left. Step right and continue over clean steps and slabs, keeping close to the arête, to a stance.

P2. 45m 13: Tend leftwards up easy rock to a steep slab. Climb straight up to a corner above a blocky ledge. Climb the brown and grey corner, over a bulge, to a spacious stance.

P3. 40m 16: Stem up the wide break to a knobbed slab which leads to a layaway corner/ crack. Climb this to a stance, or stance higher above shattered blocks.

P4. 48m 12: Step right and use the arête to gain the hanging slabs. Continue straight up to the top of a small gendarme.

P5. 45m 16: A spectacular corner capped by a triangular overhang: Use corners, cracks and a face to gain the main corner system. Step left at a chockstone onto the left edge of the arête. Climb this directly. Follow the crack, passing an overhang, to a stance.

P6. 48m 15: Step right onto a block. Use a finger crack and arête edge to pull up onto superb rock. Climb cracks, mantles and layaways to easier ground. Scramble to a stance.

P7. 20m 13: Move up an awkward corner on the left. Step right and up to a stance. Scramble along the ridge to a blocky summit. 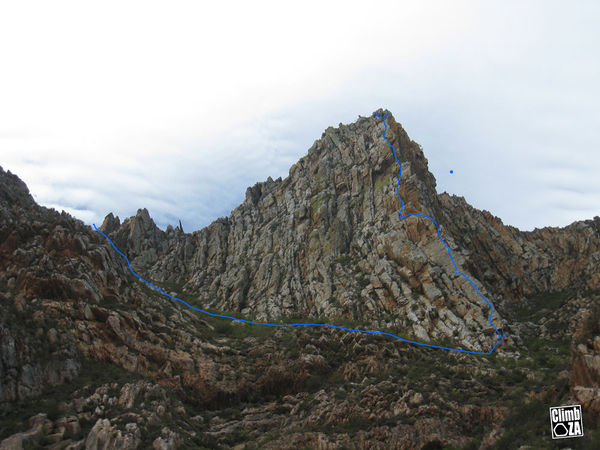 At the head of the gully to the left of the main buttress (i.e. the descent gully for Eagle's Folly) lies a striking arête. Eagle's Arête climbs this feature. 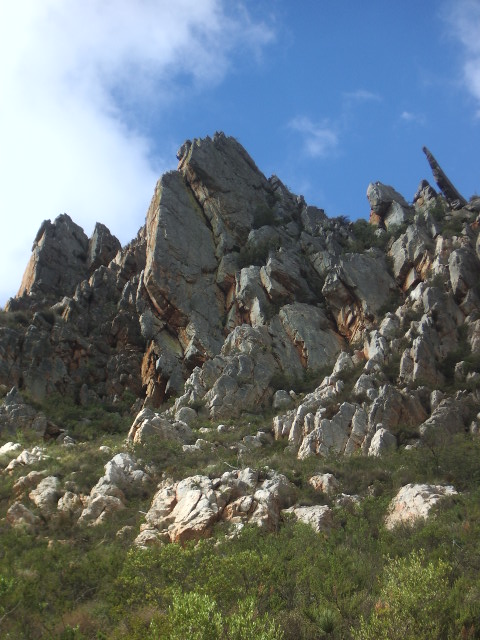 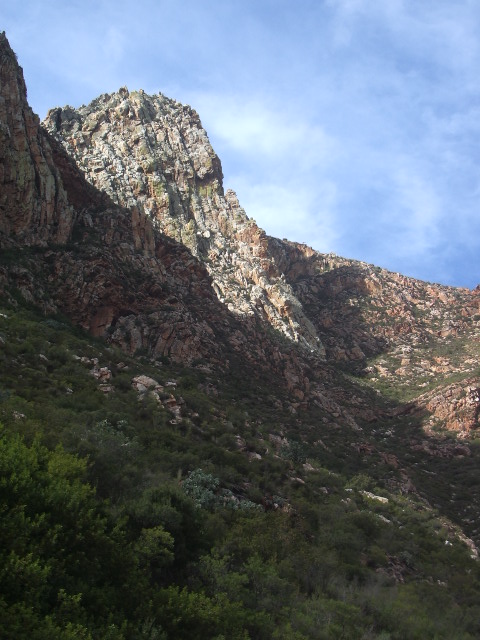