Variable climbing from nice sport climbing at Skoorsteenkop to multi-pitch tradding, some on big walls. The climbing is located in quite a number of areas.

Usual sport climbing or tradding racks. On trad routes wear a helmet and use double ropes.

The sport climbing is single pitch. The trad climbing is mostly old sandstone with some loose rock in certain areas. Chapman's Peak is quite serious and while some parts of The Sentinel are really good, other parts are grim.

From Cape Town go via the coastal route passing Llandudno else via Constantia Nek.

Many of the old routes are described in journals of the Mountain Club of South Africa.

Park at the top of the exceedingly steep Blue Valley Avenue which leads up through the Bokkemanskloof housing estate. Find the path to the left of the end of the road. Head up to the prominent buttress up on the left.

Pitch 1: 25m 16. Good climbing on excellent vertical rock to the platform above.

From the top walk down the valley on either side of the ridge.

The crag is the spectacular one above the road that leads from Hout Bay to Noordhoek. Park at the appropriate siding on Chapman’s Peak Pass. Walk and scramble up a steep gorge which leads to the base of the lefthand edge of the crag. This route heads up the good white rock on the left of the face and then to the centre of the headwall in a dramatic situation.

From the top head left to the top of the mountain. Descend the north-east side facing Hout Bay, on a good path. At a big junction take a left turn to walk back down to the road.

A nice crag in the Hout Bay valley

Great on hot summer days (best in the afternoon), but this crag should be avoided when the wind blows as it is very exposed.

Mostly vertical faces with a couple of small overhangs to get around.

To get there, From Constantia Nek head down Main Road into Hout Bay for four and a half kilometres, passing the Oakhurst Farm Park and Greenacres Close. Turn left into Hughenden Road - up the road for 50m Then left into Whittlers Way. Follow Whittlers way for about 700 metres until just beyond Peterhof Close, where a locked gale can be found on the right, between number 30 and 32 Whittlers Way (opposite the entrance to No. 37 Whittlers Way). This gate gives access to a strip of land which is a servitude belonging to the waterworks department, which leads to another locked gate, and then the pipe track, which is also a waterworks servitude. Once crossed, you are on the mountain.

Walk up for 100 metres to the contour track. Head left a little way and then straight up to the obvious fortress-like buttress above.

You will need an access code for the locked gates (see below).

If you wish to continue further there are some cairns that lead to the top of Skoorsteenberg, but there is no path beyond Skoorsteenkop. The museum offers this route as' part of its walking programme.

"Access is only allowed during daylight hours, as there are security beams in the area and people crossing could cause problems for the adjacent landowners who are trying to keep their properties safe. "He also urges the public to leave all gates locked once they have passed through them and to be safety conscious while in the area. There are two locks. Please keep the gates locked and don't use after dark.

You must use email to get the new access code. Send an email skoorsteenskop@cityrock.co.za and get an automatic reply with the code. The reason you can only get access to the code via email is so that we know who you are. Crime in the area is a problem, and this way we have at least some record and accountability who got the code, and when. Alternatively, email Anita from the MCSA. mcsacapetown@iafrica.com, she will also have the code.

Short, fun route on isolated face just right of Lichen it or Not, in a nice position above the gully.

Fight through crack in the roof above ledge, then follow rails in the centre of the face to top. 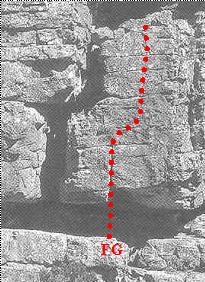 Twilight of an Idol - Originally opened by Guy Holwill and John Orrock as a 10 pitch aid route in 1989. Freed (except pitch 4) by Guy and Dave Pothier in 1992. Most pitches listed here are quite short. It awaits a completely free ascent...

The feature to look for is the rail going leftwards thru the big roof on pitch 4.

P2 – 26: Climb the short sandy wall to the hand-crack thru the roof (might be soft for the grade)

P3 – 20: Climb the crack dihedral to the ledge below the big roofs.

P4 – A1: Climb the big dihedral to below the roof, then rail out leftwards to a stance just around the lip. This should go free 24-26 ish – but it's quite intimidating.

P5 to P9 18: Climb the face straight up tending slightly rightwards – you'll eventually end up on a great ledge at the base of a clean dihedral (this can be done in 2 rope-lengths rather than 4 pitches)

Walk off right along the big ledge (one section where you need to take care).