This route is on the right side of the amphitheatre, lying to the right of Armageddon Time and Second Coming (hence the apocalyptic name) on the steep walls close to the easy-angled Smalblaar Ridge. There are two key features. One pitch below the halfway ledge is an enormous roof, perhaps the biggest on the amphitheatre, which the route turns on the right. Above the halfway ledge lie three vertical fins. The route uses the left one. 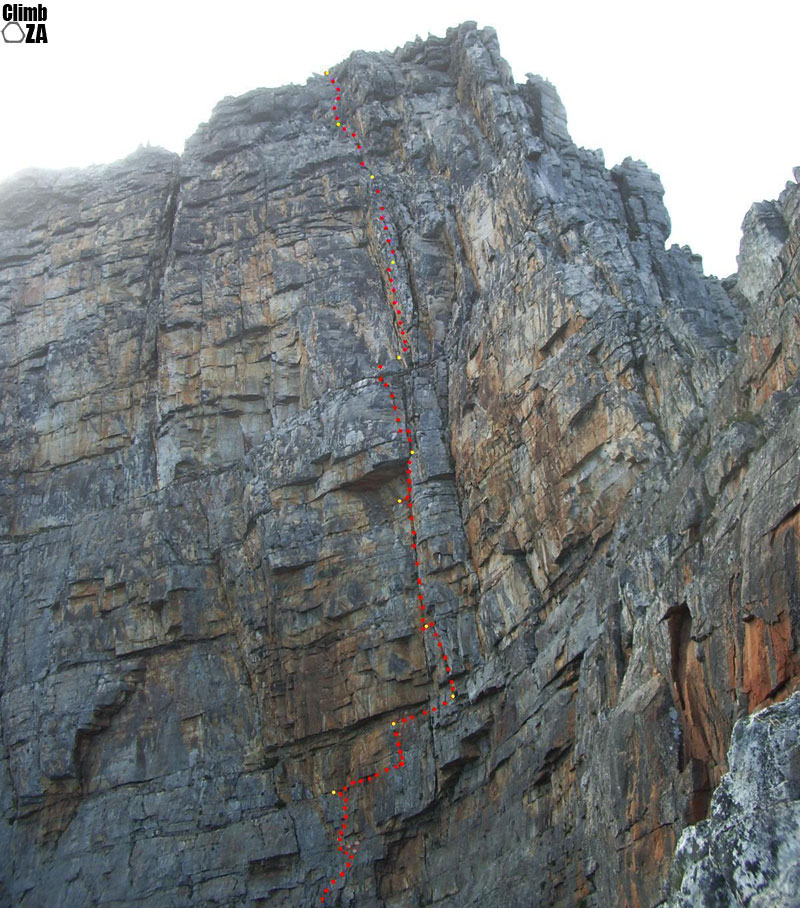 Start: At the clump of trees against the wall at the top right. Begin by scrambling up on the left over easy broken grey rock.

P1 35m 19: Head up and right to an obvious vertical crack. Start up this crack then angle up leftwards to a whitish-yellow recess below a small roof. Get around the roof on the right then head straight up a crack to just a few metres below the big, long roof system. Stance on a small ledge a few metres off to the left, alternatively combine with the next pitch into one.

P2 20m 20: Move back to the crack system then traverse right on a steep orange wall that has an obvious big rail and pockets on the face. At 7m the rail turns round a corner and ends. Out of sight of the belayer keep traversing at the same level but now on dark rock under a roof for a further 5m. On an open face continue traversing right for another 6m until reaching a crack system leading up. Head up to the big ledge.

Walk along the ledge to the right. Pass the white sandy corner after 4 metres and continue another 4 metres to a break in the roof. Stance here.

P3 15m 19: Crank through the roof and head straight up the clean crack to reach a ledge.

P4 40m 22: On the ledge move left for a couple of metres then step over the void. Climb up the sustained and unrelenting crack including overcoming a couple of small roofs. Do a long pitch to reach a small ledge on the left about six metres below the Great Roof.

P5 15m 22: To the right is a steep and intimidating reddish face. Head up and right on this overhanging face to reach a big undercling flake. Up this flake then the crack above it to reach the roof where it ends on the right. Turn the corner of the roof to get onto a small ledge.

P6 35m 19: Straight up for a few metres then move out leftwards for a couple of metres to gain a little crack system that heads up the clean grey faces that are directly above the enormous roof. Beautiful face climbing takes you to the halfway ledge. Get on top of the large platform to stance. (The Armageddon crux pitch is immediately left)

P7 30m 25, A1: On the platform move up and across to the right. Directly above is a big crack system with a massive protruding flake. This is the Armageddon Wimp-Out pitch. Judgment Day takes the overhanging orange wall to the right. Head up the unrelenting overhanging wall using the parallel vertical cracks that lead to the grey arête on the right after about 25 metres. Stance around the arête to the right.

P8 45m 20: Nice easy climbing leads directly up for 20 metres to a ledge. Step off the ledge to the left and delicately get up to a rail and gear a few metres higher. Rail 5m right then up cracks and a detached block . Stance a couple of metres above a big chockstone.

P9 30m 19: Climb the bottomless chimney slot with the chockstone wedged in it at the top. Step left and head up the crack system until forced to move left using edges to get across into the offwidth that becomes a perfect finger crack. Head up to the overlap then move a few metres to a comfortable ledge on the left. The ‘Changing Cracks’ pitch. The next pitch can be combined with this one.

P10 25m 16: Climb up to a ledge and step right. Balance up the gearless face for a bit to get to a small horn. Up the magnificent ‘Handlebars’ Pitch to the summit!

EITHER walk right to the gulley between Smalblaar ridge and the chesspieces. This involves three short abseils.

OR use the DOWN TIME Rap Route