The climbs mentioned here with the exception of Thabana Limele are on Cave Sandstone outcrops. This rock varies between good and atrocious. The routes described here are mostly on the good rock. However holds have been known to drop off, and a gung ho approach could lead to serious consequences (See RESCUE FACILITIES). Lesotho climbing especially in the urban areas attracts a following of small children whose cries of "Give me money", or "Give me sweets" can be irritating to anyone more accustomed to the solitude of the mountains. Firm, but polite replies of "NO" seem to work best. Please do not give sweets or money it will only create problems for other visitors. It is advisable to haul a sac behind the leader as unattended belongings can vanish. Theft from or of cars has not been experienced and a policy of parking in a prominent place seems to pay off.

Lesotho suffers none of the access problems experienced in the Republic. Here the mountains are free to be enjoyed by all.

The author is most familiar with the English grading system, below is his attempt to equate the English and South African systems.

The author (Rock climbing around Maseru, Russ Dodding) acquired a bolt kit in 1987, and he would hesitantly recommend any new router to carry one. The faces can give good climbing and not always hard but usually poorly protected. When placing bolts whilst leading on sight, mistakes can be made. In hindsight some of the bolts in this guide were mistakes.

It’s wide open the routes are there. Good climbing. 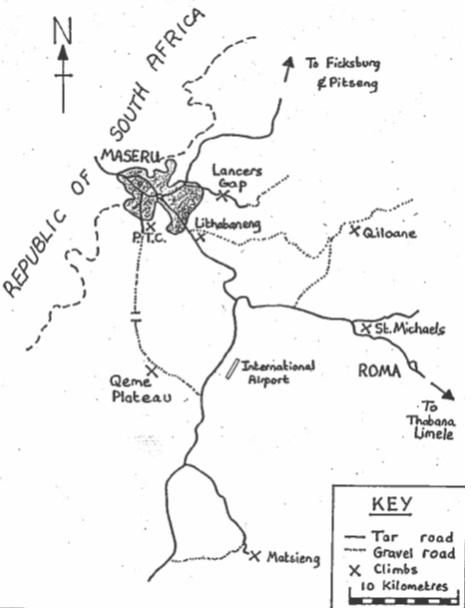