This sector is reached by walking around past the North-West Pillar. There are several short cliffs below and right of the Parlimentary Wall (which is accessed from above).

Climb the central series of vertical breaks on the buttress. Near the top, step right to a foot ledge then through the tiny overlap to the top.

Start just right of Familia Roach and head up and right to follow the left side of a groove on the right of the buttress. Near the top, make a traverse right at a finger rail and then up to the top. 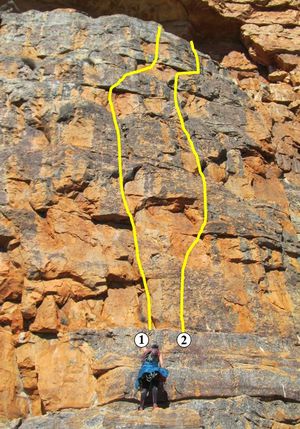 Start at the cairn and keep left but stay on the face, no point in walking up the broken ledge. Negotiate the crack in the open book and traverse right and up to the same stance as the Red Pillar Route. Take some small nuts and cams for the crack.

A technical one pitch climb for a cold day. Start at the cairn and climb more or less straight up via some small crimps and side pulls. Stance on a comfy ledge under a roof. One or 2 airy steps out the left make it possible to gain the face above, top out after 50m. The second pitch was probably climbed before as part of one of the old routes there.

Proud line with committing crux. Climbs the centre of the face to the right of the Red Pillar

Start up a very short crack to ledge. Follow the most direct line to the base of the steep orange face. A tricky section on crimps leades to a horizontal break. Traverse right and pull over the small roof at a huge jug. Move back left and then more or less straight to the top. 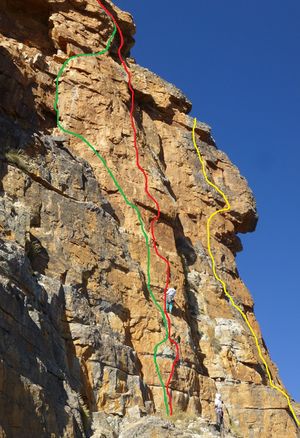 From Spout cave, walk the entire length of the Main wall and past Rooibosch. Continue around and just as the back side of Tafelberg comes into view, scramble up right to a traverse ledge about ten meters up. Follow this back around to the front side of the mountain to the North-West Pillar. The routes start from the traverse ledge and end at the ledge about 40m up. There is a tat anchor near Pedestal Face and a good bollard near the top of The Tabhomi Gun Show

Climb up a series of vertical cracks a few meters to the left of the North-West Pillar. 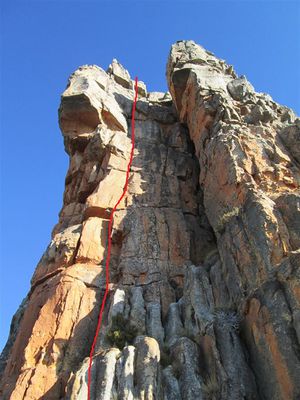 This route is on the face to the right of the North-West Pillar. Straight up the technical face just left of a vertical recess that runs about a third the way up cliff, and about 3m right of the corner formed by the pillar. At the narrow ledge follow a crack and steeper climbing above.

This is the arete that is visible on the skyline as you approach from Spout Cave, and is a few meters right of The Tabhomi Gun Show. Start directly below the sharp edge half way up. Climb dead straight up the arête with much satisfaction. 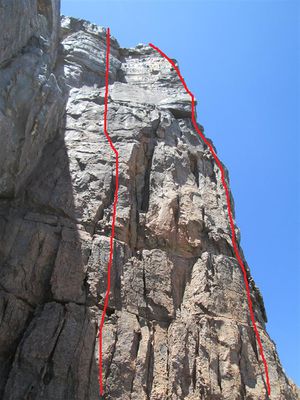 Starts to the left of Thimble up an easy break, then follows the centre of the wall to the right of Edge of Existence

Pull up into the easy break that is above a lower overhang with a large boulder inside it. At the ledge step meters left to below wall between the arête and the easy ground on Thimble.

Follow a series of vertical crack up the wall to an overlap. Step right and pull up into a thin crack. At the finger rail head left and then straight up the wall

From the first ledge above the ground, follow the large left facing brown corner, to the right of Water Karma. At the top of the corner step right and then straight to the top.

Climb the vague arête that forms the right side of the right wall of Cocoa corner. Beware- there is a large loose block at the top of the arête. Avoid this by traversing right a bit below it and climb the face just to the right to the top. 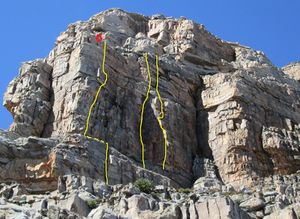 Start several meters to the right of Pedestal Corner. Climb the features on the part of the wall where it makes a blunt, 90 degree turn.

Start to the right of Pedestal Face from a rock ledge. Take the easy break that leads directly to the honeycomb section of rock seen from below. Climb just left of this and straight to the top 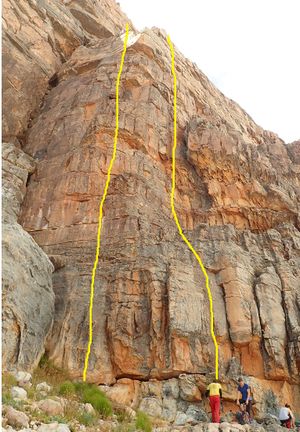