A pass made famous by its bouldering, the Pakhuys Pass also offers plenty of sport climbing and trad.

On the Calvinia side of the pass is Faith, Hope and Charity: three buttresses offering many trad routes, mostly opened in the early 80's.

New routes added to an area right of Faith, Hope and Charity in this pdf:

Routes on the pass down towards De Pakhuys

A multi-pitch route on the left side of the pass as you drive down toward De Pakhys campsite. Afternoon shade. There is a convenient laybay you can park at and take the line of least resistance to walk up the slope. The route starts more or less in the middle of the wall on darker brown rock near a left facing recess with a roof a few meters up.

Some great climbing on the last two pitches, but shark infested territory lower down. Two abseils with 60m ropes gets you back down.

Not much information on the climbing in this area. There was some ancient tat on the ledge after pitch 2 about 10m of pitch 2 stance so some climbing has been done on this wall before. 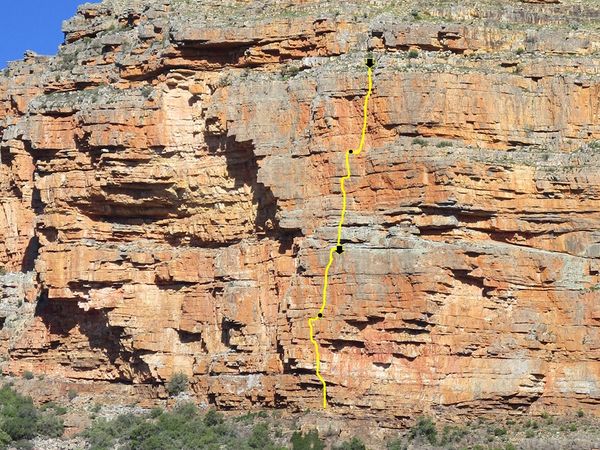 P1:~25m (21). Up the blocky features to the roof and pull through a break and step left to a small ledge. Head straight up past the right side of the low roof. To avoid getting into a pickle, embrace the surrounding fragility and tread lightly but confidently onwards until you reach a good rail. Move up and left to a vague recess which is followed to rail, traverse right to a small stance on a narrow ledge.

P2:~25m (18) Move up and slightly right from stance to stay on the most solid rock. More or less straight up to a ledge (rap tat around a touch point)

P3: ~25m (19) From the stance, again head up more or less straight aiming for a wide horizontal break. Step right and pull up on improving rock quality to a neat ledge.

P4: ~30m (22) Bester than sex pitch. Walk slightly right from the stance and romp up steep orange rock, tending ever so slightly right. Pull through the final narrow roof and up to a vegetated ledge - tat around a small tree.

Two abseils saves a long walk so you are not too late for the party.

Routes in the Witness/ Dihedral valley. Walk in as for dihedral, before reaching the top head right along the cliff band. 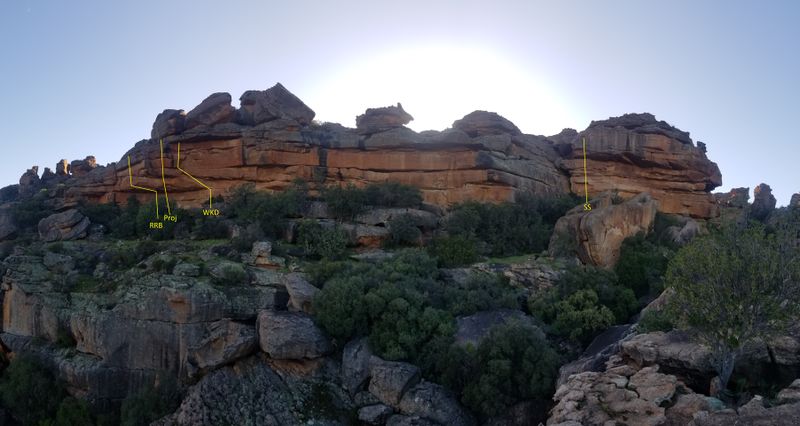 Buttress to the right of the Rooi Rok Bokkie Buttress.

Crags described from the closest to the campsite and routes from the left to the right.

Crag with a small cave, 5min walk above the start of the trail leading to the crag.

Three small caves increasing in size from left to right.

A kloof (gorge) hidden to the right of the Rooikat face. At the rooikat face, walk to the far right, cross a small gulley scrambling along a ledge to a big block. Mantle onto the block and mantle onto the ledge to the left, following the "path" to the cliff line where you will come across "The Leaky Cauldron (15)". Climb "The Leaky Cauldron" to enter Diagon Alley. The chains can later be used for an abseil anchor to descend all the way to the base of the Rooikat sector safely.

An alternative approach to Diagon Alley can be taken via the Office's back door, traversing the top of the crag and entering via the back of the gulley.

Big beautiful orange wall. Please start by tying a knot in the end of your rope.

The base of the crag is made up by a labyrinth of caves with crazy potential.